I was inspired to create some French line infantry command stands carrying ensigns as a break from the 1804 pattern flag with its eagle tipped standard. You don’t see too many examples of these, with a search on the Internet only turning up a few ensigns still surviving. The ensigns (ensignes, often confusingly referred to as fanions which were the pennant carried by companies as rallying points), created in 1811 were in response to the directive of 1808, that had limited the eagle to one per regiment. This was presumably carried by the First assuming the colonel and therefore the eagle was there. They were to serve as an aid in helping the battalion on the march, and as such were to have no other import.
The directive was as follows:
The ensigns were to be woollen, 813mm (30 inches) square, no adornment of any sort and on a steel or iron pointed staff 2 metres 60 (8 feet) long. The colours were; Second Battalion white; Third Battalion red; Fourth Battalion blue; Fifth Battalion green; Sixth Battalion yellow. Of course these directives were widely ignored and a wide range of ornamentation and even battle honours were applied to the ensigns.
My period for gaming is the Peninsular War and with the ensigns only being decreed in December of 1811 they are a bit late for my French army. But the question does arise what the French battalions other than the First did use in the interim between the removal of the eagles in 1808 and the decree of 1811. There is some evidence in the Peninsula that many ignored the 1808 directive and kept their eagles. It is also likely that ad hoc flags were created.

I had recently received the newish Hat release for French command figures pre-1812, something that was needed in the hobby for those of us gaming  that Napoleonic era on 1/72nd. Up until now I had been using the light infantry command set, perfectly serviceable, although its officers were all in shakos.
I found this new set was not without problems, primarily an ill-fitting drum, ill-fitting optional arms, optional shako heads with the 1812 style shako plate (even though the set is clearly identified as pre-1812) and, perhaps most irritating, a drummer clearly fitted with webbing for a pack and sabre briquet but with neither included! Some of these problems only emerged as I assembled and painted the figures, and I remedied them as I moved forward, filling gaps with putty, carving back arms and adding a sabre briquet and pack to the drummer.  The review on Plastic Soldier Review warns of all these failures but I had ignored them in my enthusiasm to get my hands on the set!  (The shako plates I didn’t notice until the end but as the official ensigns only appeared in 1811 I decided I could live with this.)
I went to a fair amount of trouble fashioning a new arm for the standard bearer (the included arm, of course, holds a staff with an eagle and mine needed to be iron-tipped) before realizing that the ensign bearer should not be a lieutenant but rather a sub-officer, typically the battalion’s most experienced sergeant major! So off comes the arm and staff, and I search out an appropriate figure to re-attach them to, opting for the sergeant included in the light infantry command set as it is similar in style and size to the rest of these figures. 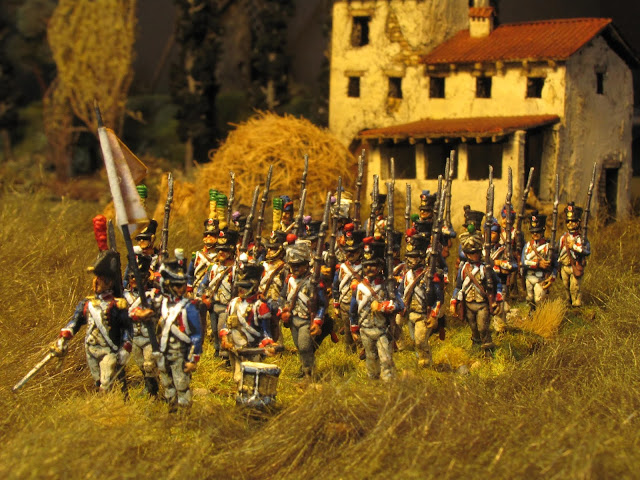 Obviously a man with a flag needs someone to follow him. In my same purchase as the command set I had also bought a box of early war French on the march (HaT Set 8296, Napoleonic Early to Mid French Marching), a much more satisfactory box of toy soldiers than the command set was. All the figures came with a bicorne head, but with the option of swapping out for crested helmets, shakos, (plumed and with shako covers) along with one head with the bonnet de police, so good options for conversions. I opted to cut down the plumes to pompoms, with the exception of the voltigeurs. (In hind sight I regretted cutting off the grenadiers plumes as well, but off they came!)
The figures represent both fusiliers and elites, and the knapsacks again had a nice selection with some cooking utensils attached to a couple of them. The figures themselves have their muskets held in a variety of manners, at least one wears gaiters and all carry variations of the non-regulation canteens the French used. I would say the detail isn't as crisp as one would like but all in all, a nice amount of variety in a box composed completely of marching figures!

The ensigns are my own creation, although some are based on images I had found on the internet. I can’t really guarantee any authenticity for these because, as mentioned previously, few have survived. Given the tendency to stray from the official directives, I think there is a fair amount of scope for creative licence with these, so have fun creating your own! Or feel free to use these below.
T. E. Crowdy’s book Napoleon’s Infantry Handbook was a great help in pulling this information together. I purchased a pdf version of this when I first entered the hobby and find myself constantly referring to it. Highly recommended!
Posted by Bill Slavin at 6:29 AM