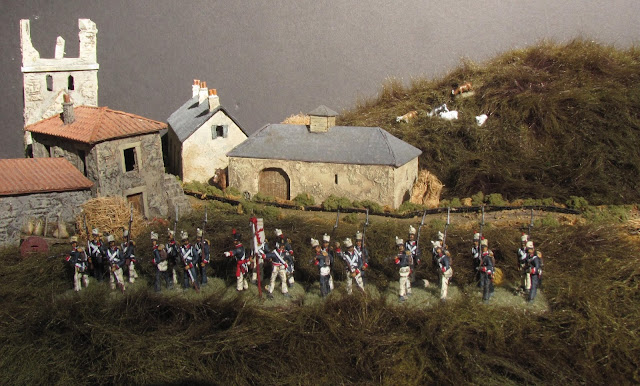 A few months ago I posted some Nassau troops that I had painted up as part of the French allies' so-called German Division, (Laval's 2nd Division) that served in the Peninsular war. They were from the big box set put out by HaT and I had far more Nassau figures than I had use for in the relatively small contingent that fought in Spain.
So I went looking for a Spanish unit that might might be a good match for these and came up with the Voluntarios de León. Part of the beauty (and frustration!) of collecting Spanish is that there are as many uniform variations as there are towns and regions creating their own militiae post 1808!
In this case I was looking for bell-shakoed, single breasted uniforms and (with a bit of help from my Hispanophile friend Brian North) settled on this unit.
My depiction of the Voluntarios de León is based on their later war incarnation, 1812 and later, when they were rebuilt under Wellington. My reference was from that godsend for miniature painters, the re-enactment group - whose site can be found here.
The conversions were pretty straight forward, shortening the plume and taking off the briquet and bayonet on the fusiliers and covering up the empty space with the ubiquitous Spanish bread bag which I modelled. Also, as I did with the Nassau troops, I created the standard bearer from the grenadier captain, with a simple head swap and small bit of modelling.
So here are the results - I hope you enjoy them! 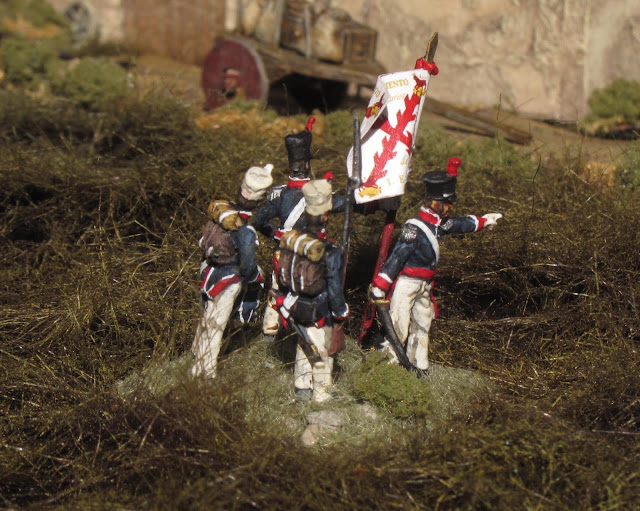 The earliest Voluntarios de León were those Cuesta had raised in 1808 for the Army of Castille. Regiments 1-3 were badly mauled at the Battle of Cabezon in June 1808, and also appeared at the Battle of Medina del Rio Seco in July. There was a second recruitment in August 1808, after Baylen, and on October they were on the Ebro, still in this 'Army of Castille' and survivors from this made their way to Zaragoza where they eventually surrendered.

There is mention of them at the siege of Astorga in 1810 (possibly from the 4th and 5th regiments) https://es.wikipedia.org/wiki/Sitios_de_Astorga but they don’t really re-enter the history books until the retaking of Astorga under Wellington in 1812. They were rebuilt under the British and went on to fight with Wellington at Vitoria (1813), San Marcial (1813) and Paso del Bidasoa (1814).
A full list of their actions can be found here: