28th and 29th Regiments of the Line

There is a great story behind these figures, one that underscores the particular generosity of spirit that I think defines this crazy hobby. A few years ago I started to paint and post my adventures around creating armies for and gaming the battles of the Peninsular War. On a few occasions I bemoaned the fact that I could no longer get my hands on the HaT Peninsular British set, and even went so far as to a fairly extensive conversion of Italeri figures, which you can see here.
But Mark Flack on the TMP forum had seen me mention this lack and took it on himself to contact me and make me an offer I couldn't refuse - a couple of sets of these figures that he had purchased and realized he would never paint. He went to a great deal of trouble to get my address and mail them to me - from Britain to Canada! - and I know did the same for another collector who lives even further away (although, as it turns out, with a better postal system).
The outcome was the arrival in my post box of two complete sets of Peninsular British and even a couple of sprues of command stands thrown in for good measure.

I have finally completed my first two regiments of these figures and the detailing and poses have not disappointed. I have made a few very minor conversions of some of the flank company figures to centre companies, but outside of that, I have only needed to create a couple of standard bearers, as I was short these. I read the good news that HaT will be re-releasing the British command set soon and hope that is the case as I continue with the painting!
So thank you, Mark, for these figures and I hope I have done them credit!

In expanding my British Peninsular army I have decided to try and get three token regiments for each of the British divisions painted (in the rule set I play, a British brigade is represented by about six stands of figures). For the 2nd Division I already had the 3rd Buffs and decided on the 28th North Gloucestershire and 29th Worcestershire regiments to flesh out this division.


The 28th was originally raised as Sir John Gibson's Regiment of Foot in 1694, being redesignated the 28th Regiment of Foot in 1751 during the War of the Austrian Succession. It fought at the Battle of Louisburg in 1758, and on the Plains of Abraham at Quebec in 1759, the second obviously being a seminal event for a Canadian such as myself!

During the Napoleonic wars they were part of the British expeditionary force sent to Egypt in 1801. It saw action in Denmark in 1807 and was part of Moore's force in Portugal in 1808-09, fighting at the Battle of Corunna. 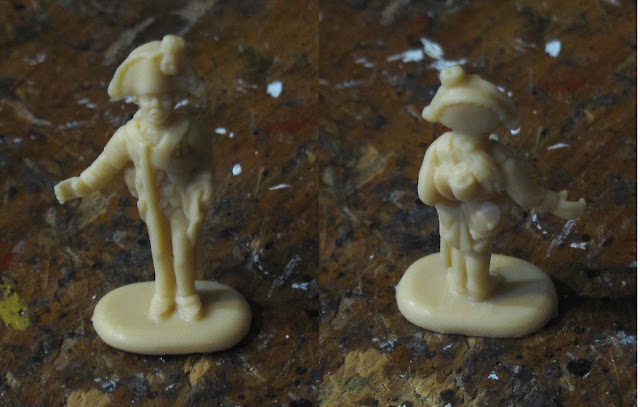 A detachment stayed behind and was engaged at Talavera while the rest of the regiment was involved in the Walcheren campaign. The regiment returned to the Peninsula in January, 1810 and fought at the battle of Barrosa, an honour which they wore on their shako cap badge at Waterloo. They stayed with Wellington's army throughout the Spanish campaign, seeing action at Arroyo dos Molinos, Vittoria, the Battle of the Pyrennes and on into France.

And now to the 29th. Also raised in 1694 by Colonel Thomas Farrington it was amalgamated with the 36th (Herfordshire) Regiment to become the first battalion of the Worcestershire Regiment in 1782. It too was in British North America, clearing the land in 1749 for the new town of Halifax. They also had the unfortunate distinction of drawing first blood in the American Revolution, participating in the Boston massacre of 1770.


The 29th began the Napoleonic wars serving as marines for the Royal Navy and later joined Wellesley's army in Portugal and Spain in 1808, participating in the Battles of Roliça, Vimeiro and Talavera. They also saw action at the battle of Albuera, making them present at most of the significant British battles in the Peninsula in the early years. After Albuera, due to heavy losses, they were sent back to England for more recruitment.

In 1814 they were shipped to Nova Scotia, returning for the Hundred Days campaign but arriving after the Battle of Waterloo.
An interesting bit of regimental history I read while researching this regiment was that ten black youths were given to the regiment and having been subsequently released from their slavery joined the regiment as drummers. The tradition of black drummers continued until 1843, inspiring me to go back and repaint my drummer on the 29th command stand.