In order to escape a bit of this bitterly cold Canadian winter, we played a non-historical scenario placed in sunny Italy in the spring of '44 over the weekend. It was basically a retread of the Somewhere in Normandy scenario that I posted last year, moved to Italy, using the Battlefront WWII ruleset. It was played in 20mm on a 4'X 4' table.

With the Allied breakthrough at the Gustav Line, the 5. Gerbirgsdivision is conducting a fighting withdrawal to the Gothic Line while the Allies stay in hot pursuit, attempting to maintain contact.
The last river crossing was only partially destroyed and a reconnaissance troop successfully made it across, but in crossing the bridge was further degraded. The fight begins with elements of 5. Gerbirgsdivision, a reduced company of mountain troops, dug in around the bridge. They anxiously await the arrival of their engineers to finish wiring the bridge for demolition before they will be authorized to withdraw. Bolstering their defence is a Marder III and an Sdkfz. 10 AA halftrack.
As the Staghounds approach the ridge above the bridge, the recce troop receives word that the last bridge has been almost stabilized to the point where brigade might be able to push a motor company across. Orders to recce are to determine whether the bridge is still intact, what, if any resistance seems to be present, and to radio back for help once the situation has been determined. They are also to aid in any subsequent attempt to seize the bridge if it is still intact. 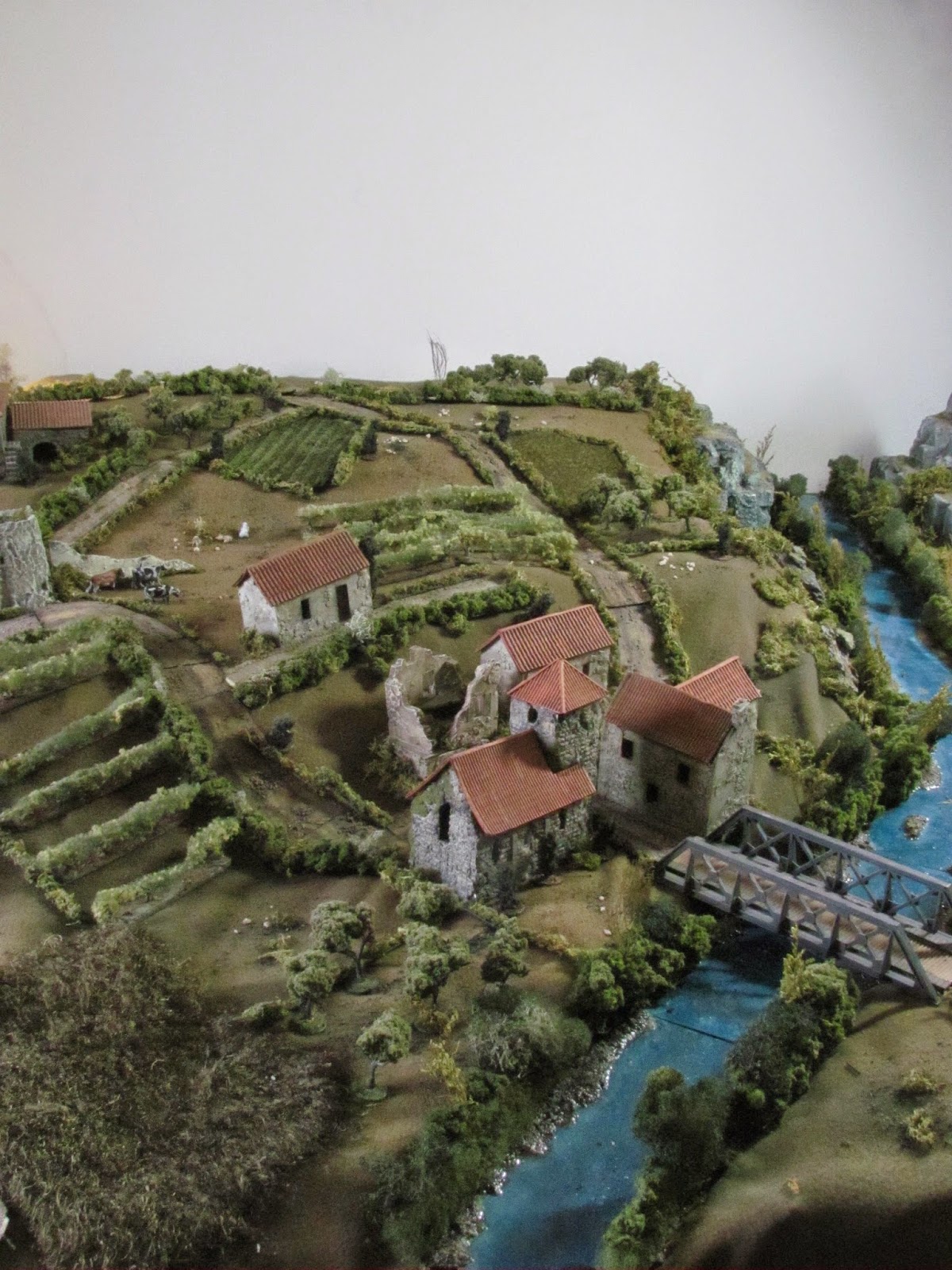 The Battlefield
As seen from the German perspective. They begin dug in in and around the small village by the bridge. The land slopes steeply down from the ridge above to the river, which is lined by steep cliffs to the right. The Allied units enter on the far (upper side) of the table via the road. The ruins of a medieval tower dominate the village halfway up the slope to the left.

The Defenders
A reduced Gerbirgsjager company, bolstered by a Marder III and an Sdkfz. 10 AA halftrack. A platoon of engineers will arrive in trucks at some point in the game (left). 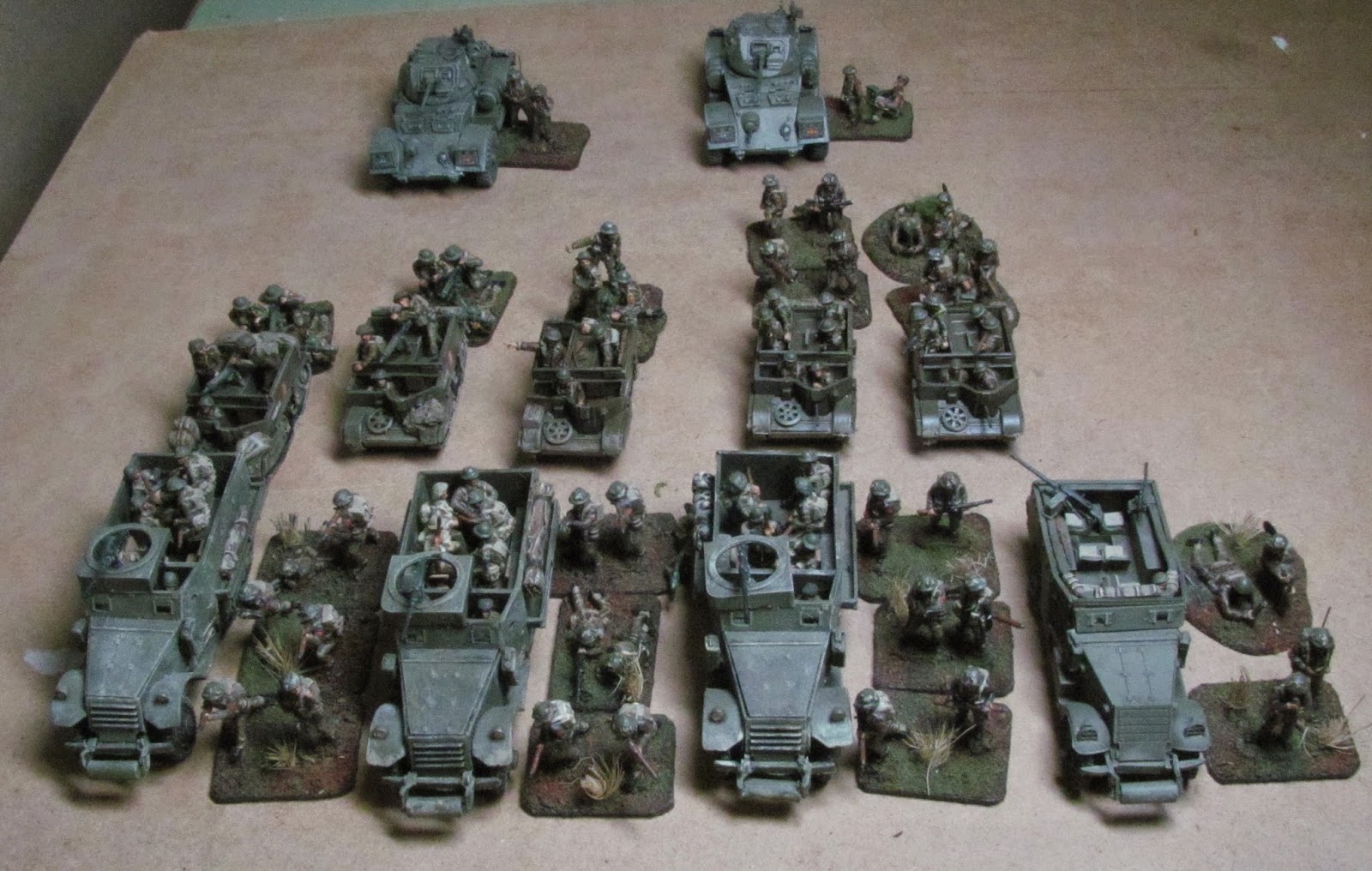 The Attackers
First to arrive are a platoon of Staghounds (back), followed up a few turns later by a motor company, augmented by a Vickers platoon, all mounted.

Germans in position
The defenders are dug in around the village that is on the south side of the river. 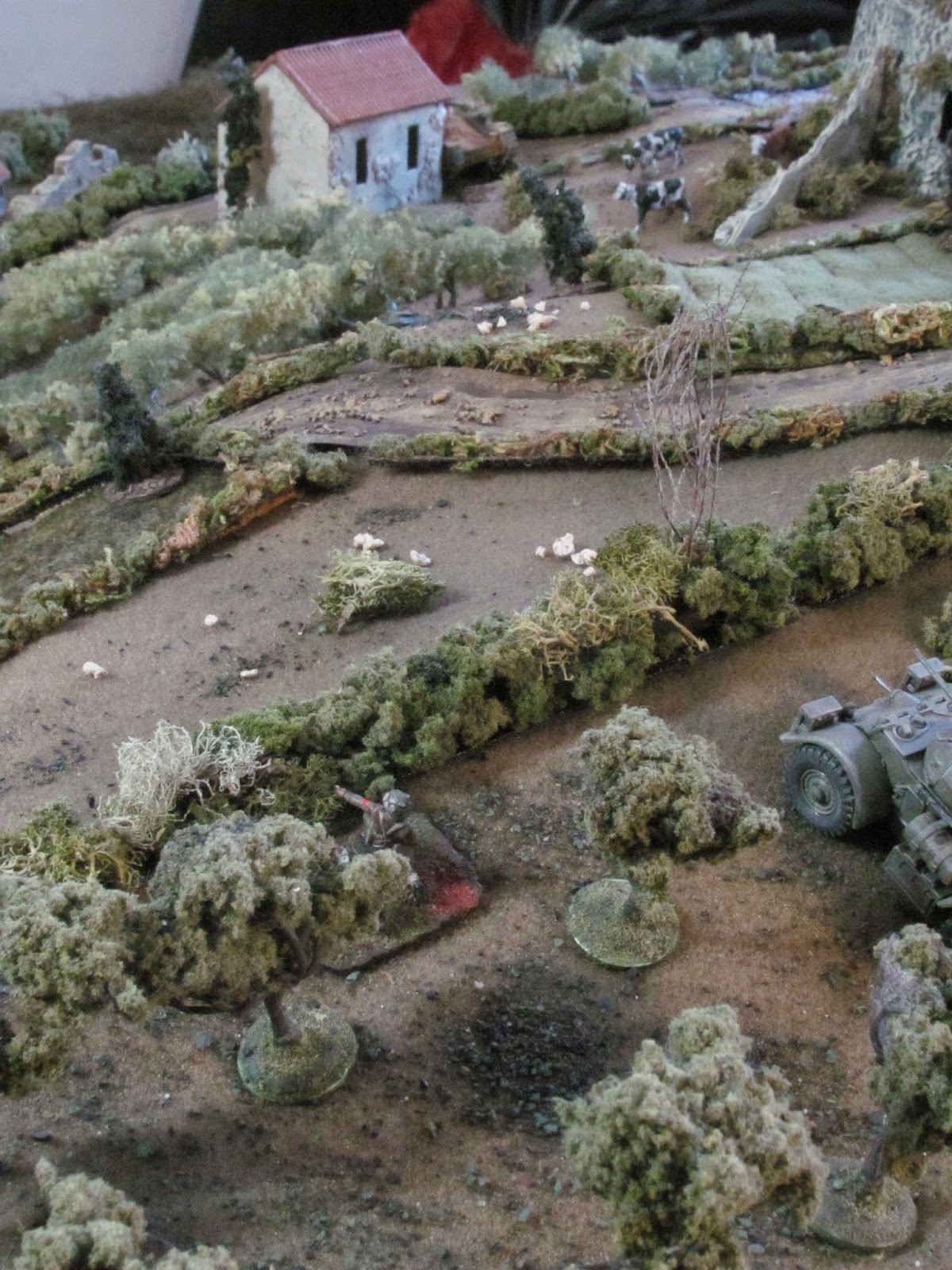 1. The recce arrive
The Staghound troop approaches the ridge from either side of the road, with their crews dismounting and cautiously moving up to a low hedge that traverses the ridge in order to view below. They quickly spot the bridge still intact and a Marder III lurking behind a farmhouse halfway down the slope. They radio back to brigade for support, but learn that the motor company is still only partially across the damaged bridge behind and will be delayed (arrives in three turns). 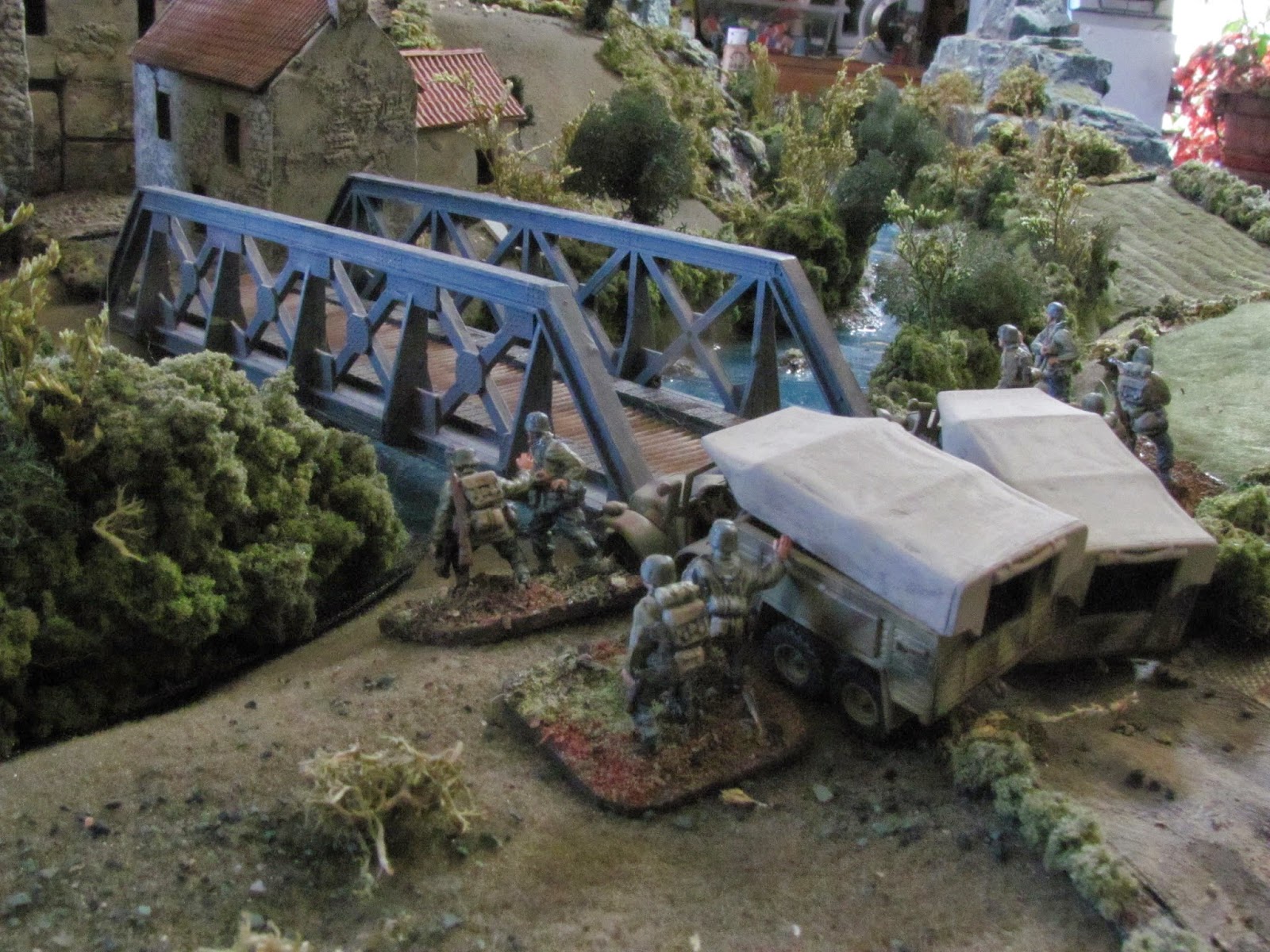 2. Activity by the bridge
While recce waits for the arrival of the motor company they continue to keep the bridge under observation. They spot a couple of German trucks arrive from north of the river and troops dismount, carrying equipment. Some disappear out of view while others can clearly be seen in activity by the bridge. The immediate assumption is that the bridge is being wired for demolition, which proves correct. 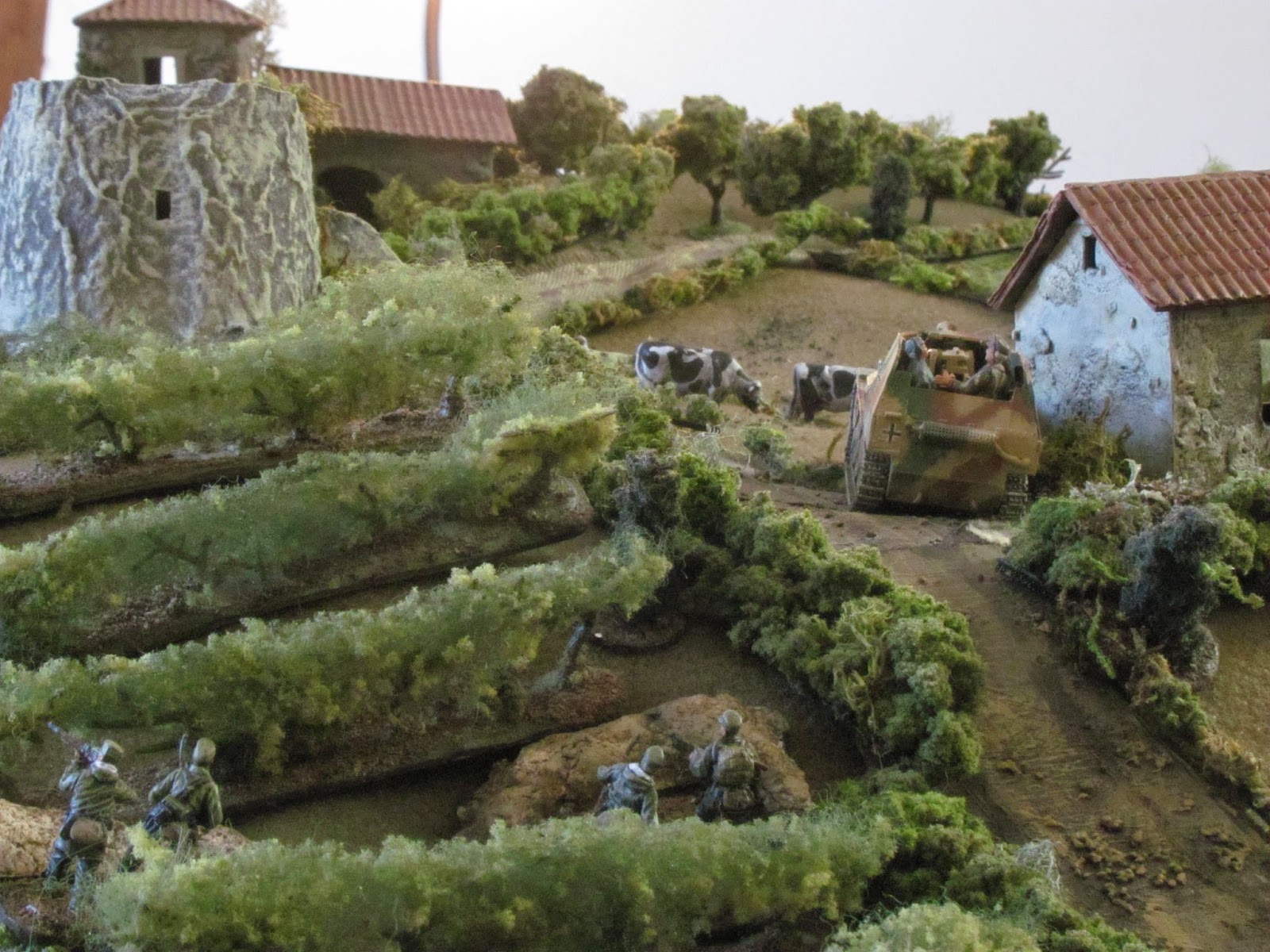 3. German positions marked
We used a mechanic where every turn of observation had a chance of revealing more of the hidden defence. As the arrival of the motor company was delayed the recce had lots of chances to search out the German defenders, who were moving about their positions unaware they were under observation. More units were spotted dug in in the vineyard below the farmhouse and several dummy locations identified as such and removed from the board. 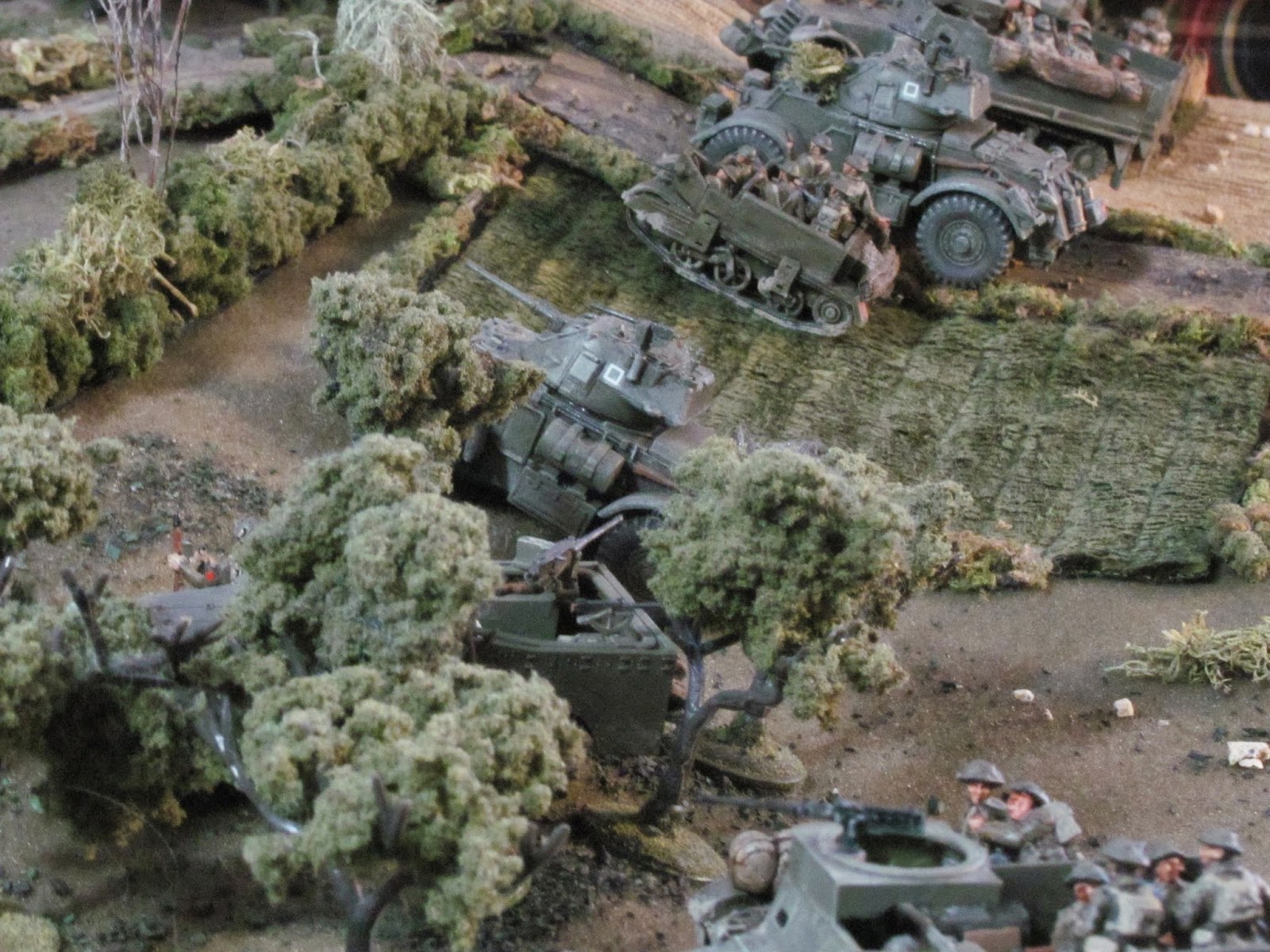 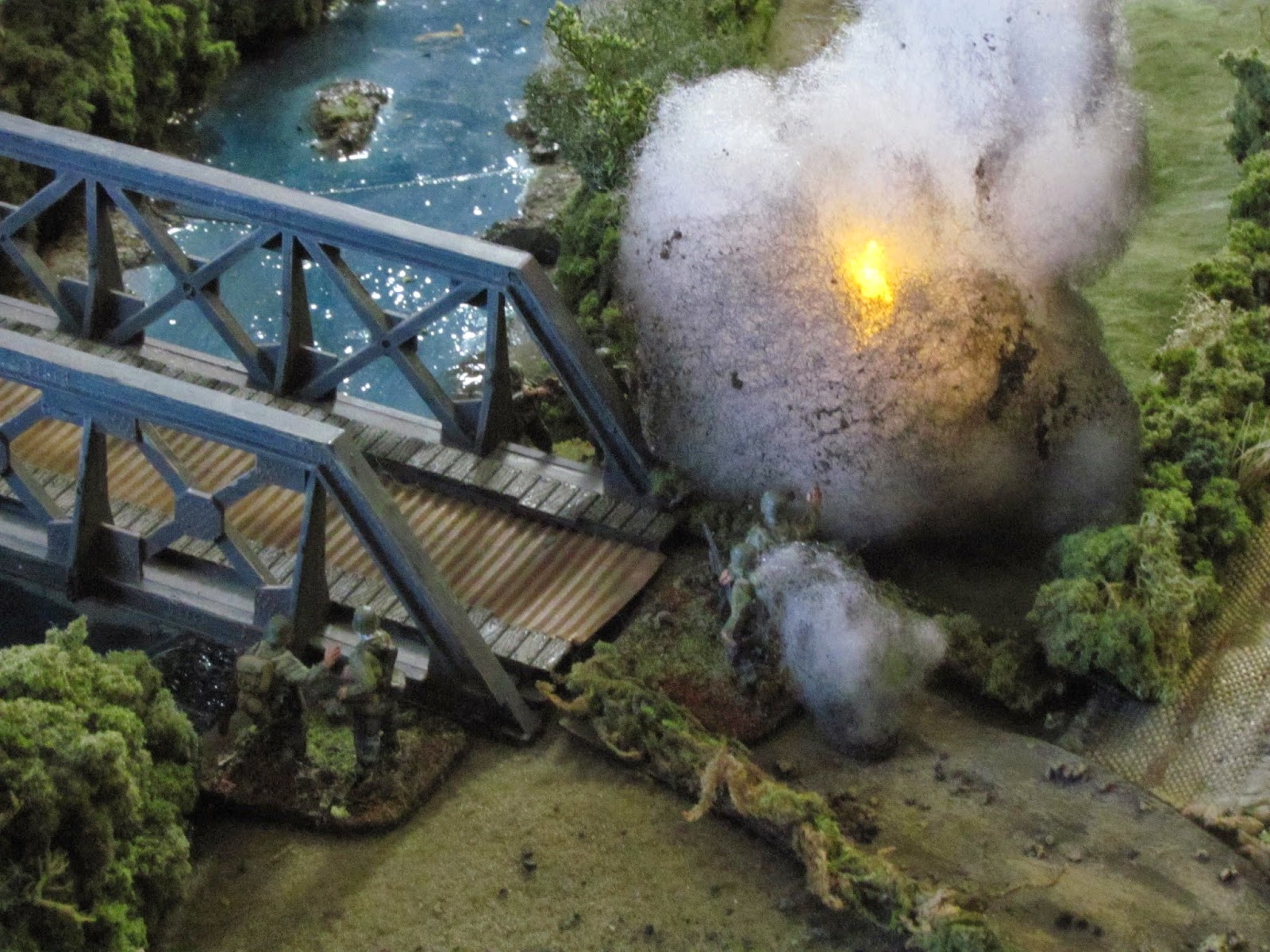 5. Bridge comes under attack
The Germans' first inkling of the enemy's presence comes when mortar shells begin erupting around the bridge. 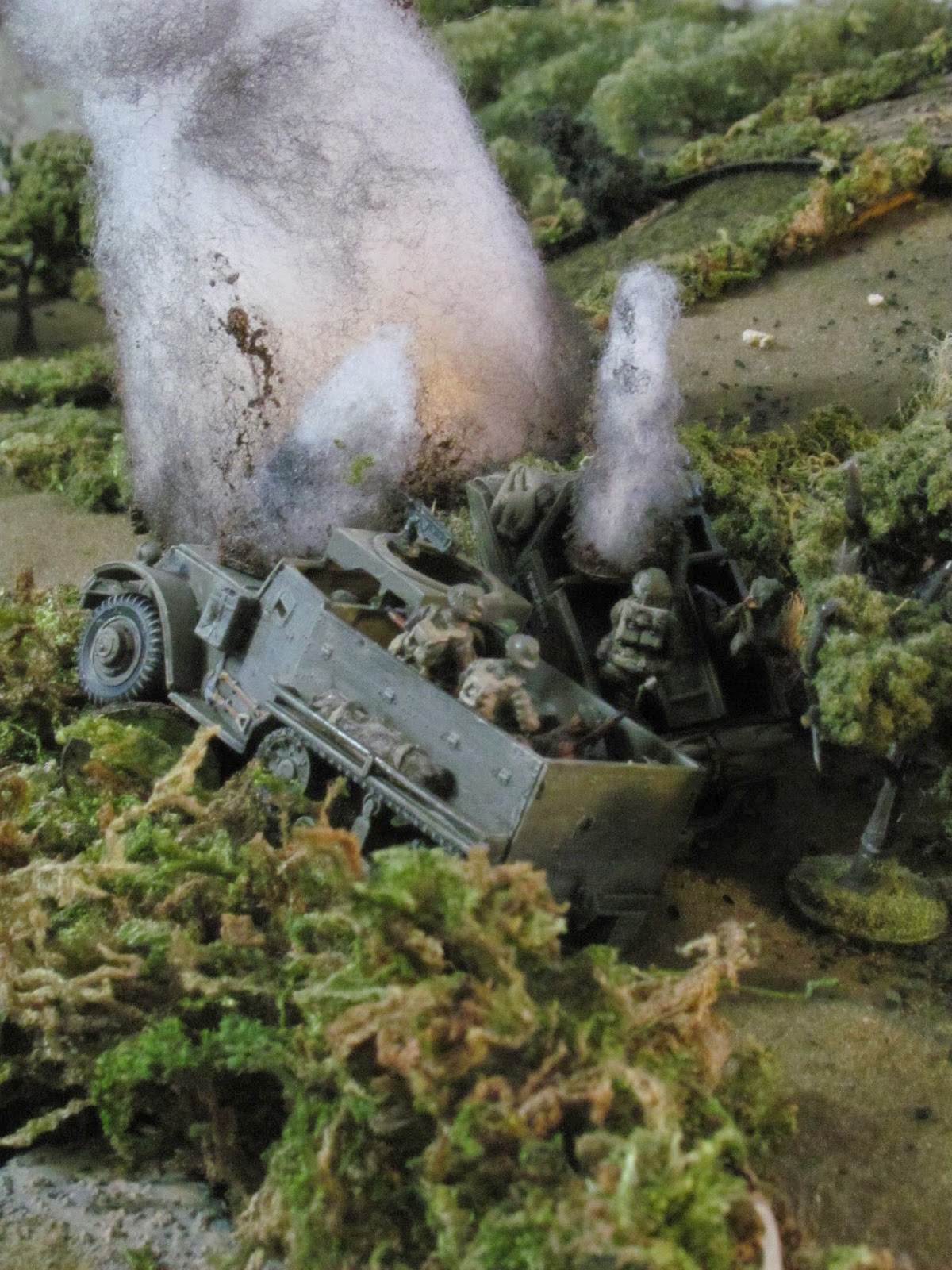 6. The attack begins
The carriers and halftracks of the motor company breach the hedge along either side of the ridge. Those on the left come under enemy mortar fire. 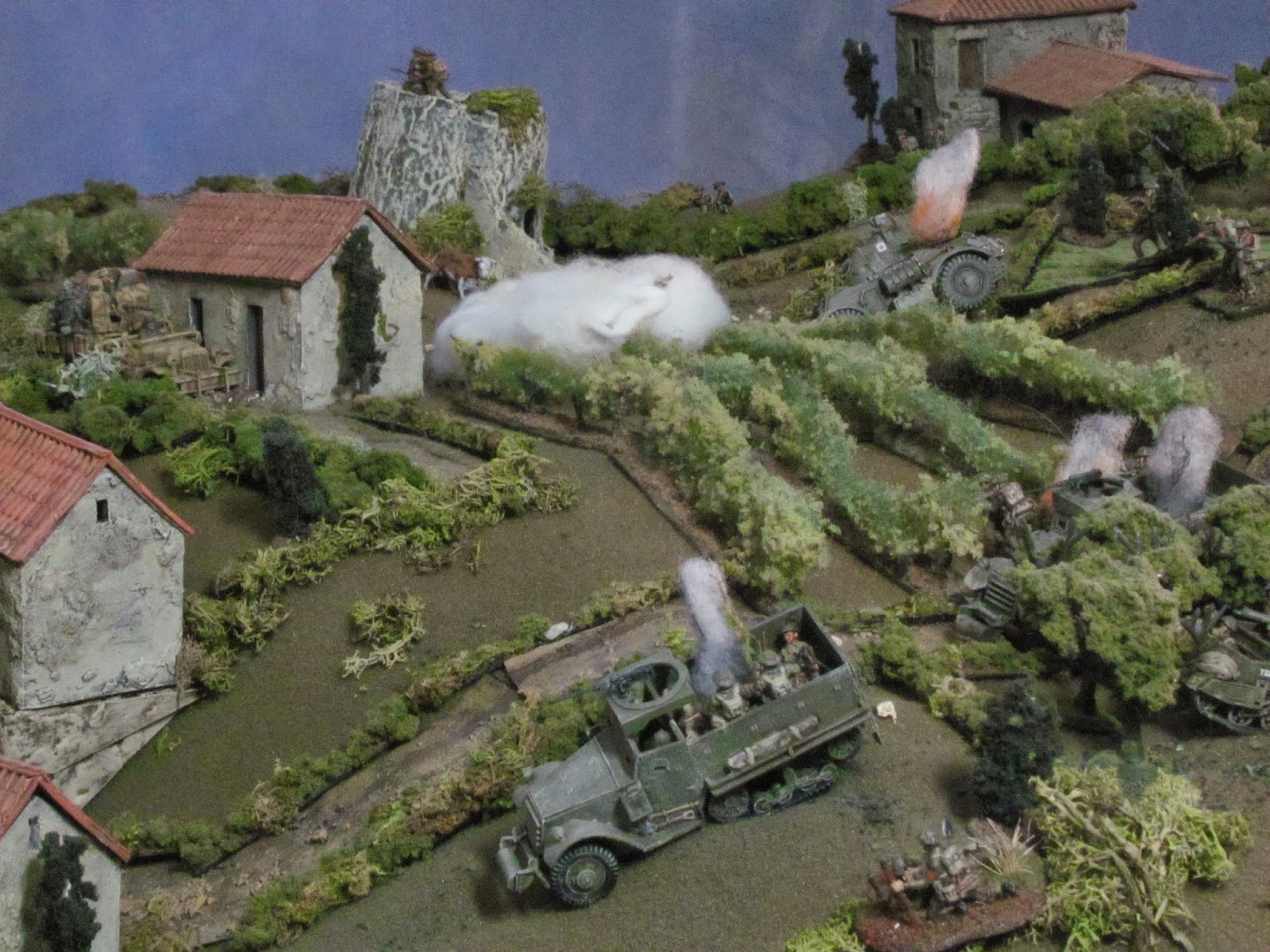 7. Pushing towards the village
The recce units scramble back to their vehicles and support the infantry attack down the hill. The German AA gun in enfilade fails to do little more than suppress the enemy as they barrel past down the slope. 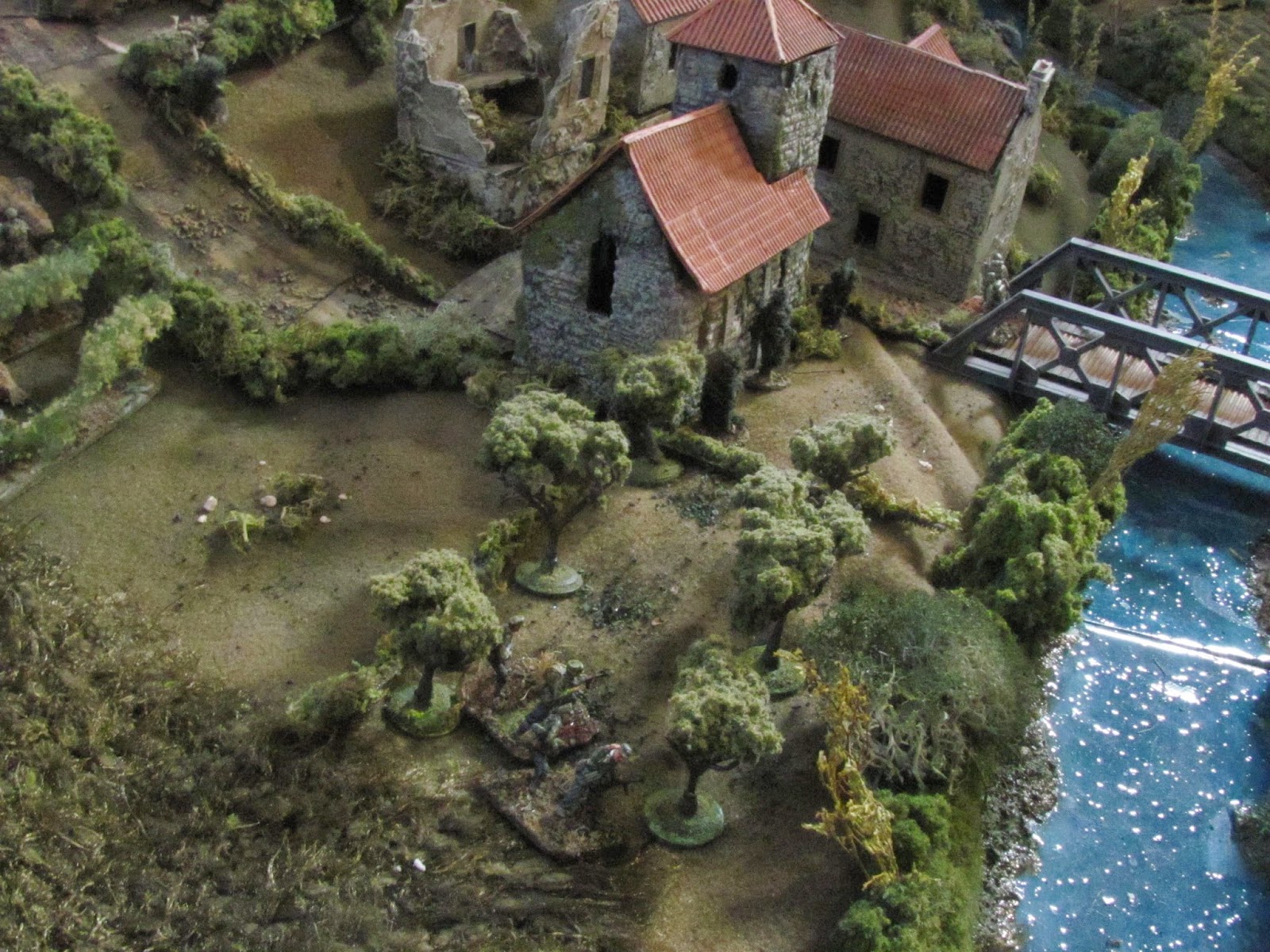 8. German right flank pulled back to town
With the Allies pushing rapidly towards the bridge on their right flank the German commander pulls some of his troops off the left flank and hustles them back towards the village. 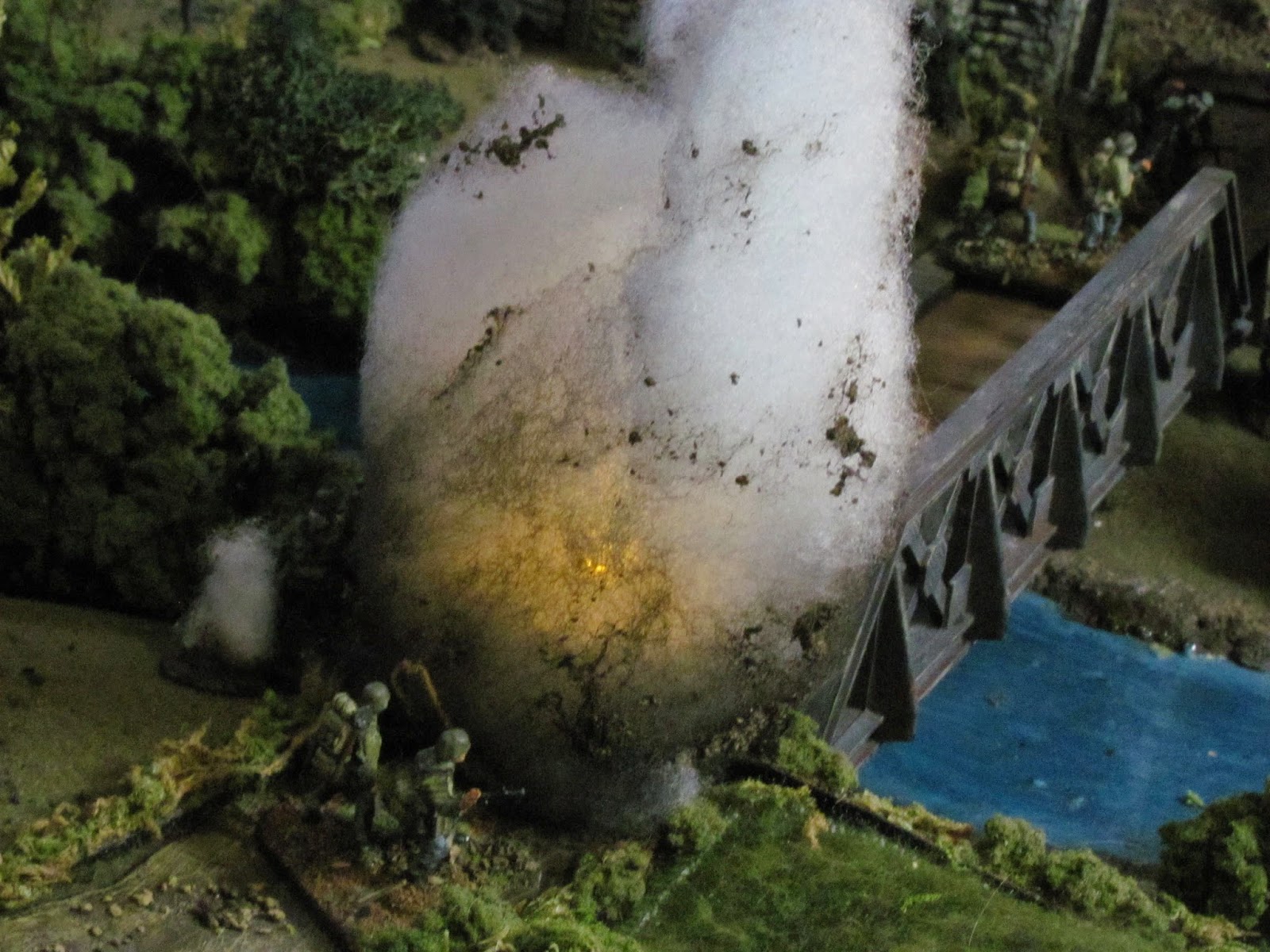 9. A second engineer section is KO'd
The Allies manage to bring the engineers at work on the bridge under direct fire from a Vickers that makes it down to the river edge, knocking out a stand. Although successful in laying three of the four demolitions needed to blow the bridge, a second engineer platoon is KO'd by mortar fire. it becomes a race against time for both sides. 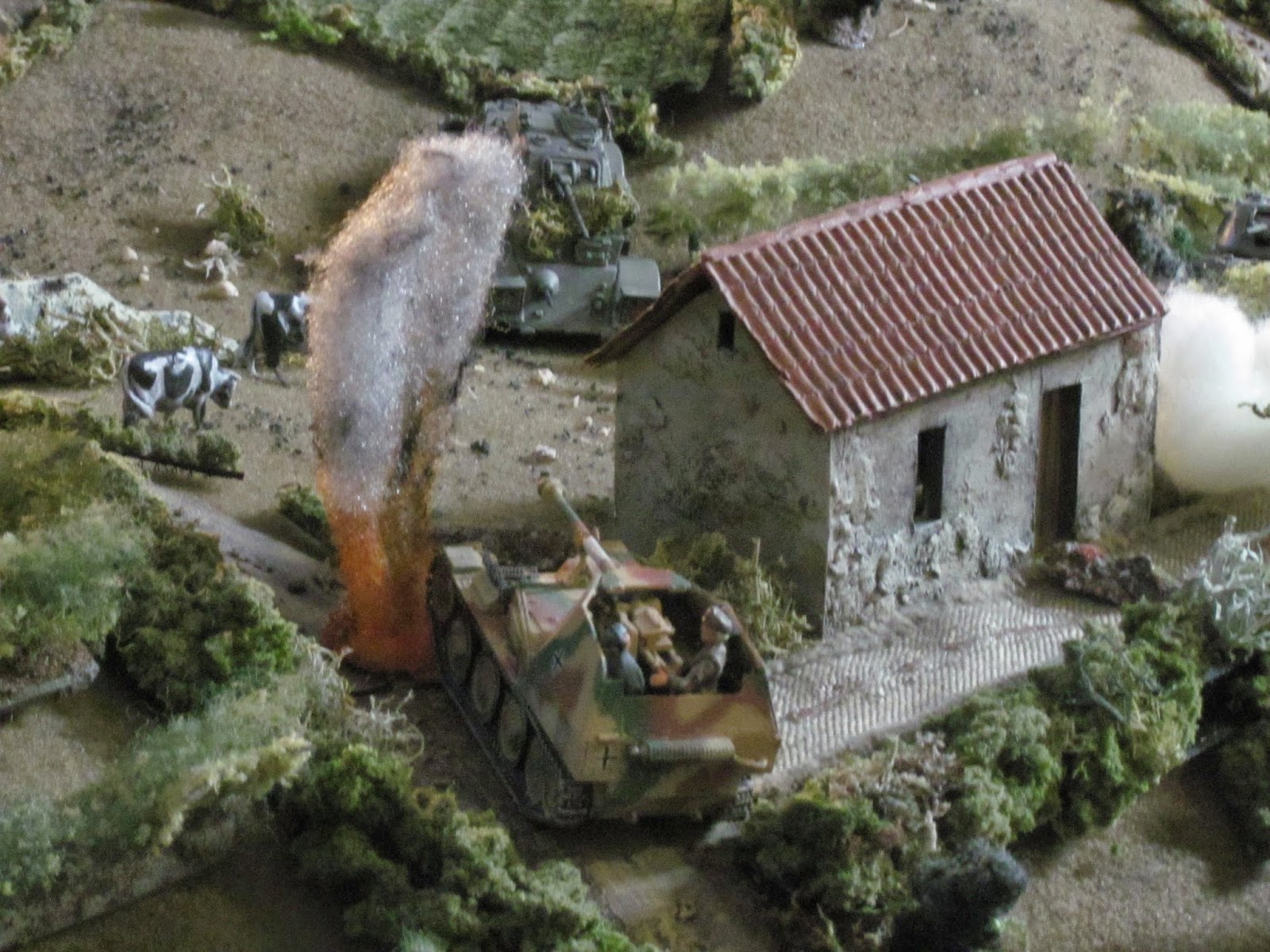 10. Marder KO'd
Meanwhile by the farmhouse the attacking Allies are held up by the German defence. The Marder III blasts one of the carriers before coming under fire by the Staghounds. It attempts to withdraw along with the AA halftrack, but waits too long and is knocked out. 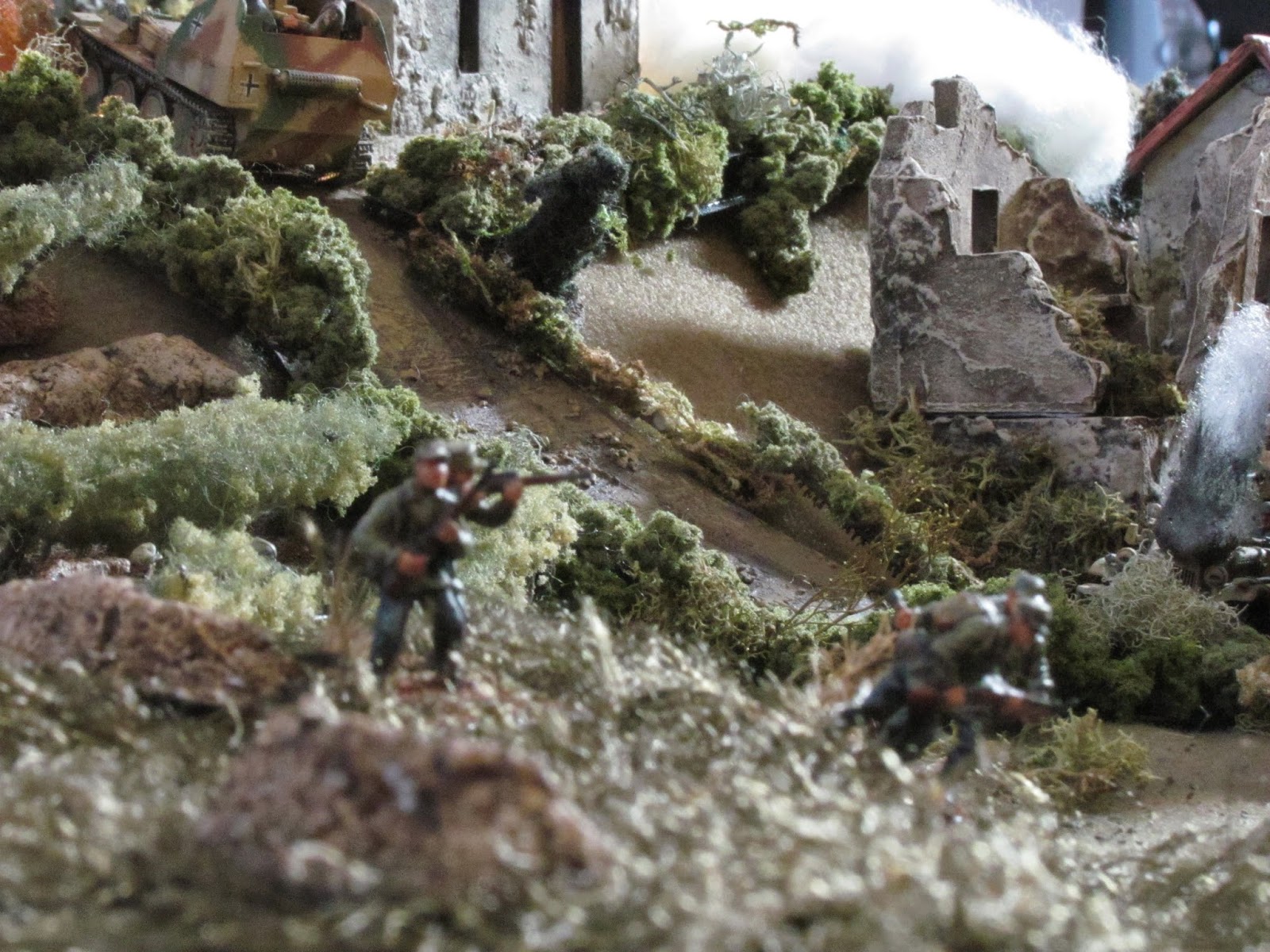 11. More troops withdrawn
With the situation less pressing on the German's left flank, some of the troops from the vineyard are withdrawn to take up positions in the village. 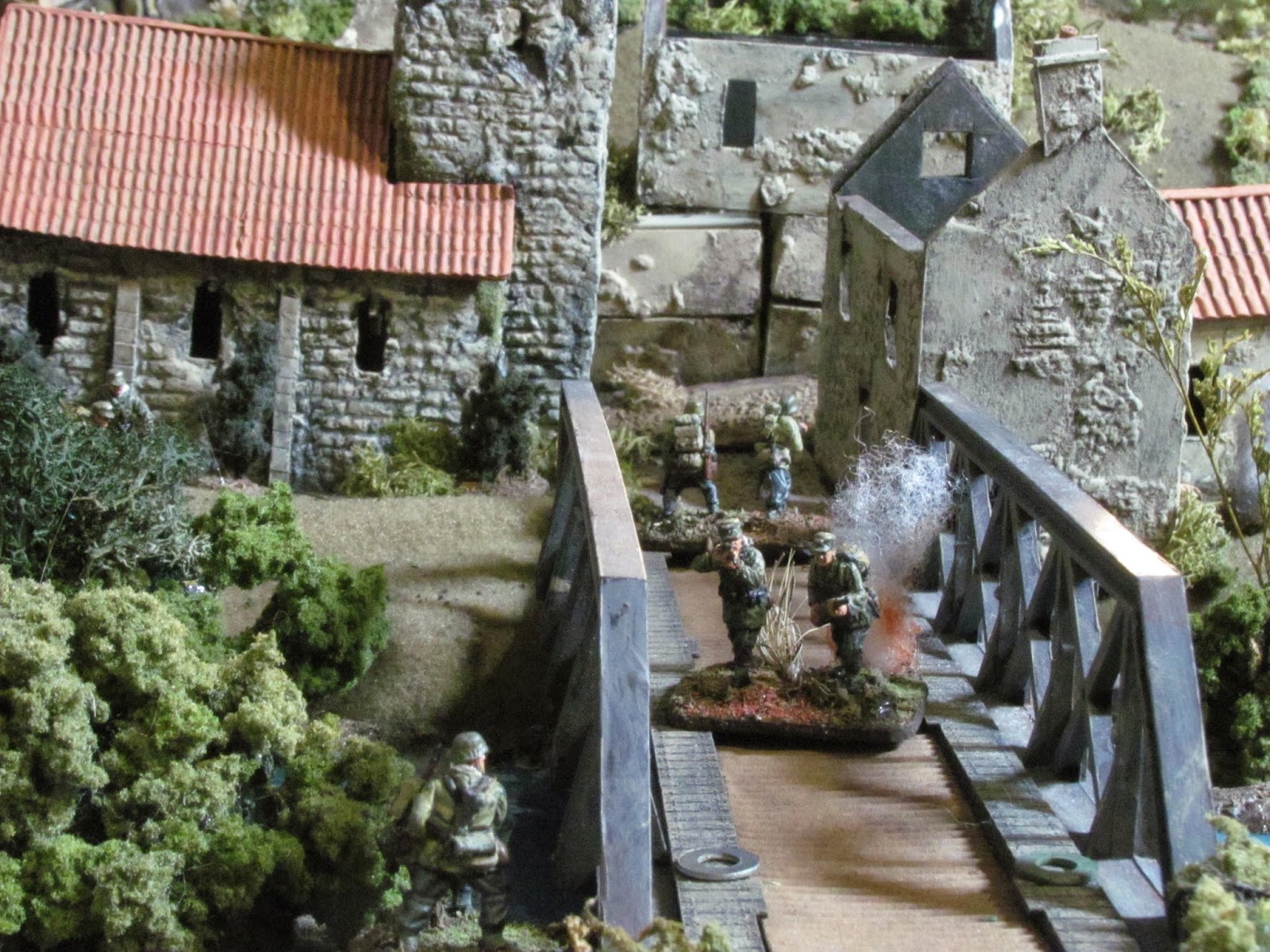 12. Some defenders panic
Some of the mountain troops panic, racing across the bridge past the engineers who are desperately trying to get the last demolition wired and in place. 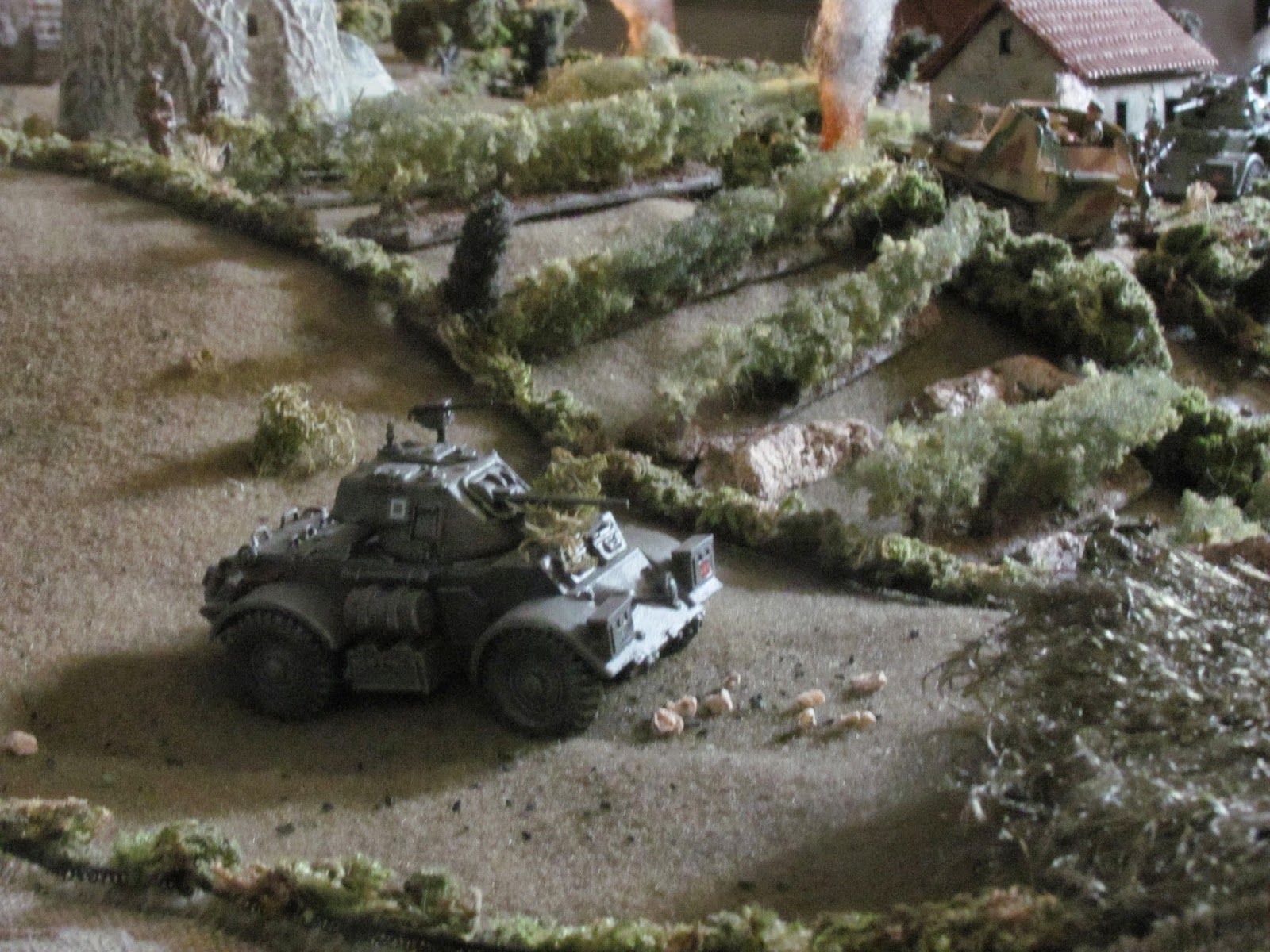 13. Staghound advances on German left flank
The Allied infantry takes a pounding on both sides of the village, forcing one of the Staghounds to advance without infantry support around the far side of the vineyard. 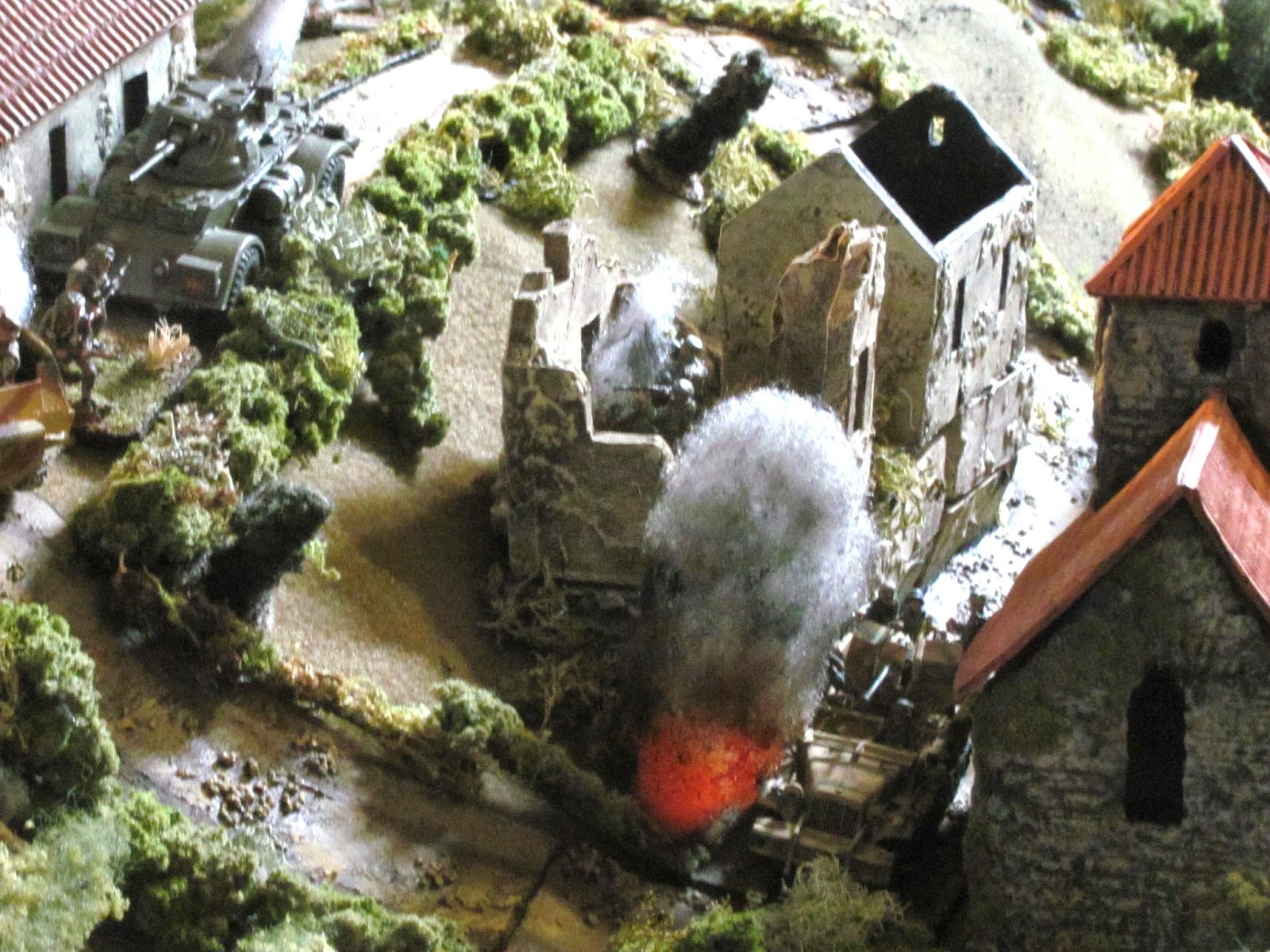 14. Sdkfz. 10 AA halftrack knocked out
As the enemy presses in on the south side of the village, the Sdkfz. 10 is put out of action by the second Staghound before it can fully withdraw into the safety of the village. 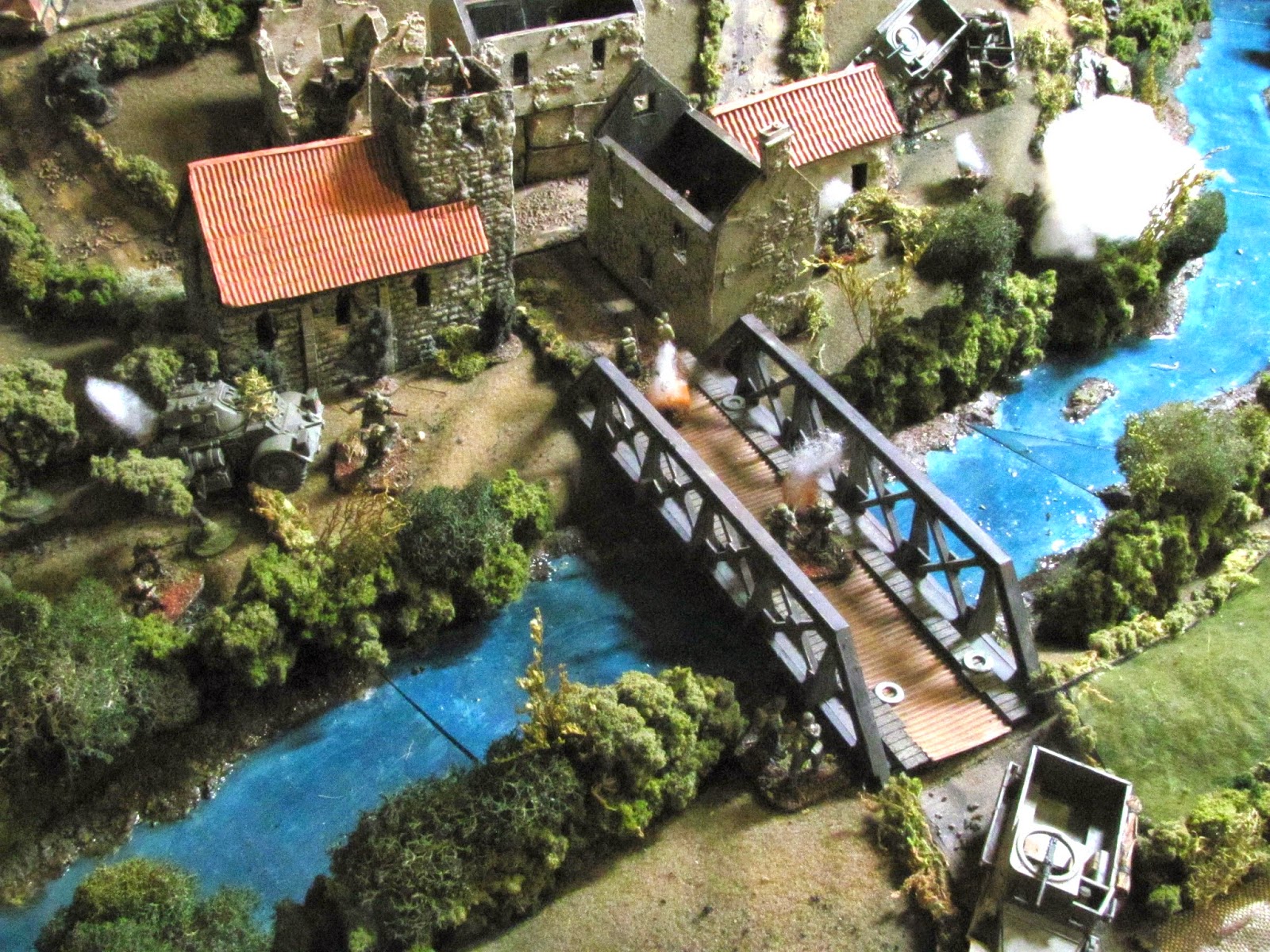 15. Overrun!
An Allied halftrack takes advantage of the enemy's disarray to run through the village, overrunning the engineer and infantry stands on the bridge. On the left, the Staghound encounters German mountain infantry retreating through the orchard next to the church while on the right, the Vickers is smoked by the German mortar in an attempt to give some cover to the engineers so they can finish their work. 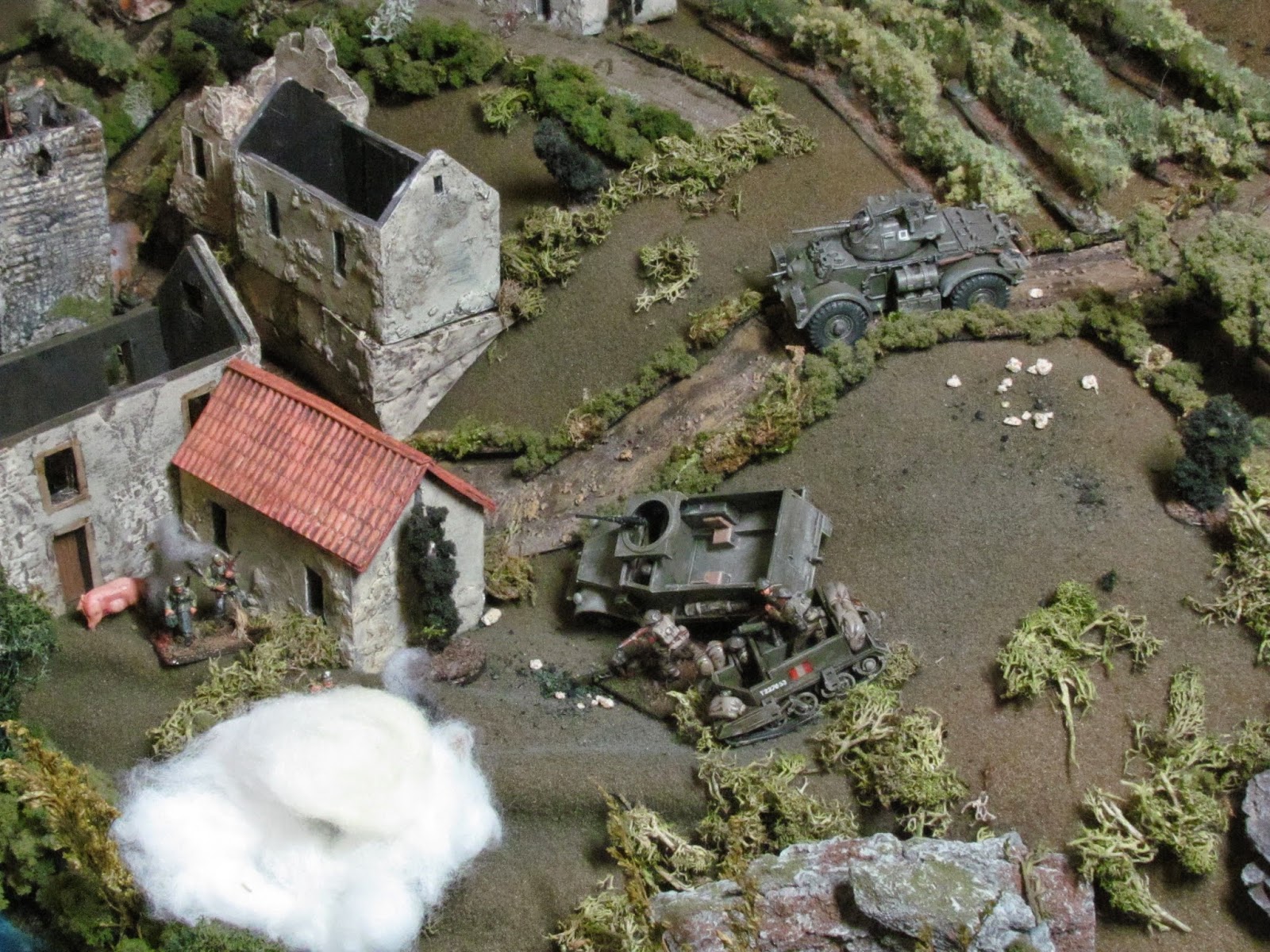 16. Allies press in on other flank
To the right of the village the other Staghound supports infantry in their attempt to break through the German defence. A German heavy machine gun in a house on the edge of town cuts up the attacking infantry, who have dismounted from their transport while other Gerbirgsjager drive back theVickers carrier that has been firing on the engineers. 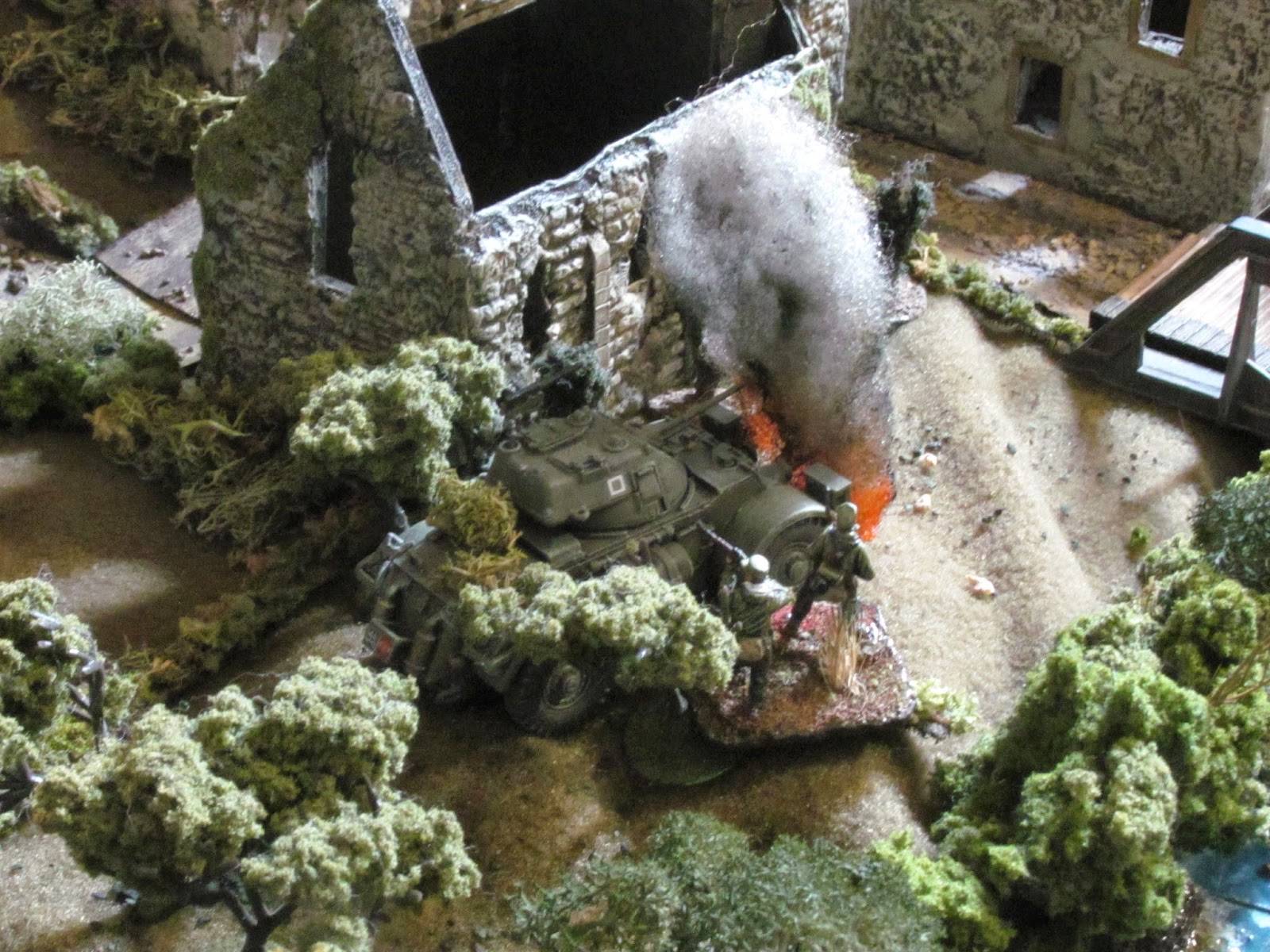 17. Staghound eliminated in close combat
The Staghound flanking on the left is trapped by infantry in the orchard and falls to close combat. 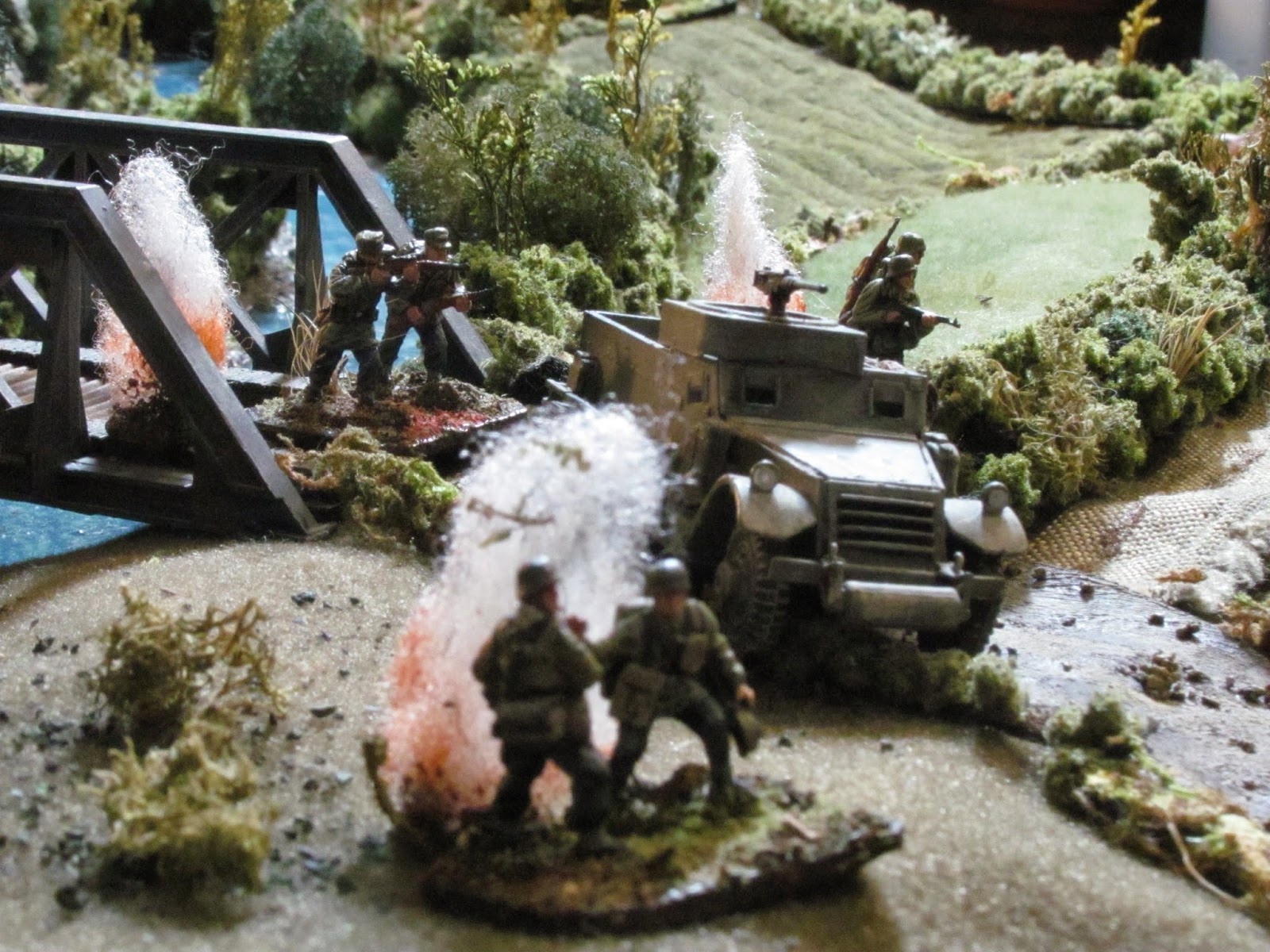 18. Panic by the bridge
However, the unexpected arrival of Allied armour sends the engineers working on the bridge into panic and they break and flee to the north side of the river, while the halftrack engages the recovered mountain troops. 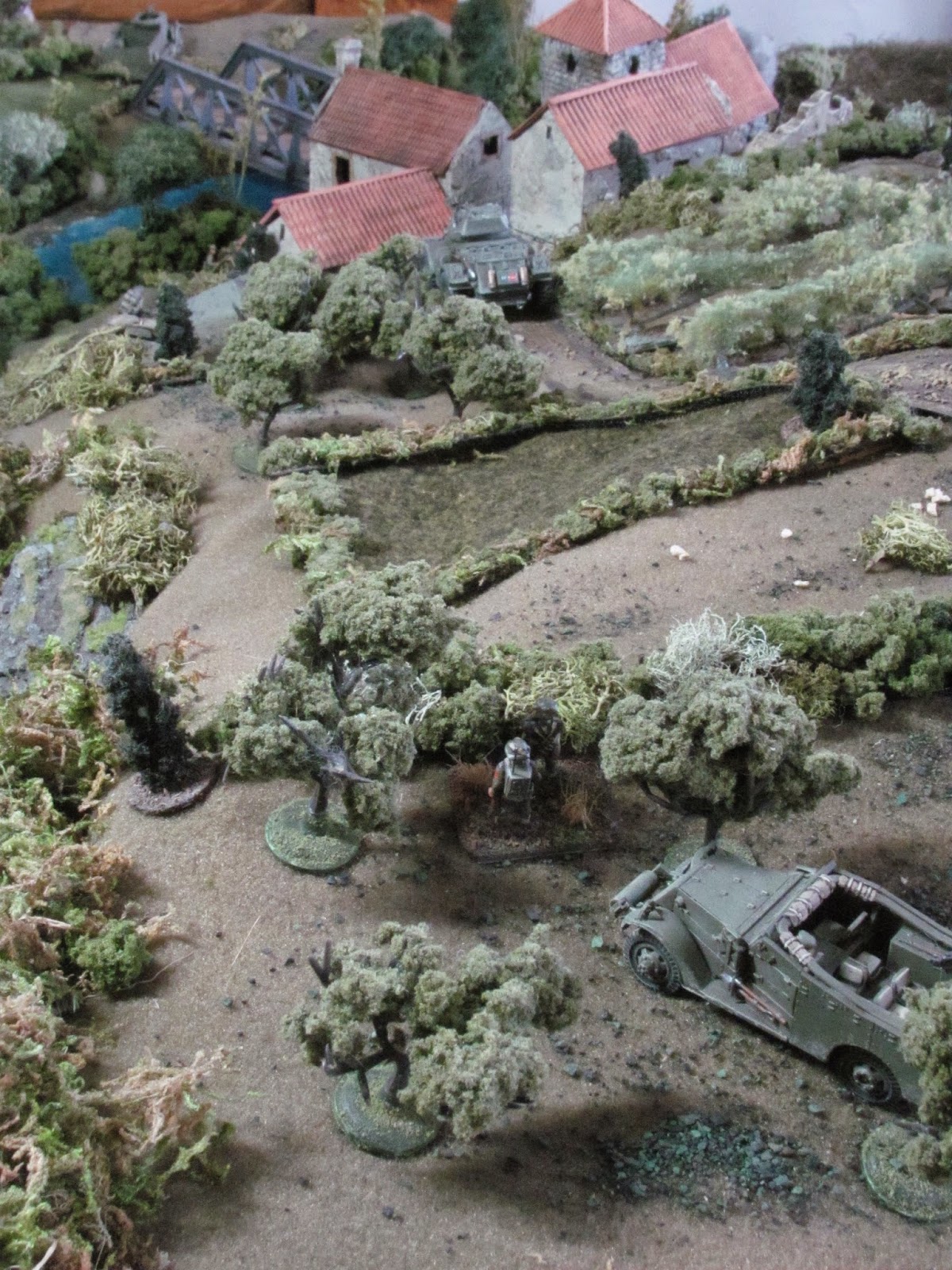 19. View from the ridge
From his position on the ridge the motor company commander watches the battle below unfold, directing his mortar fire on targets around the bridge. 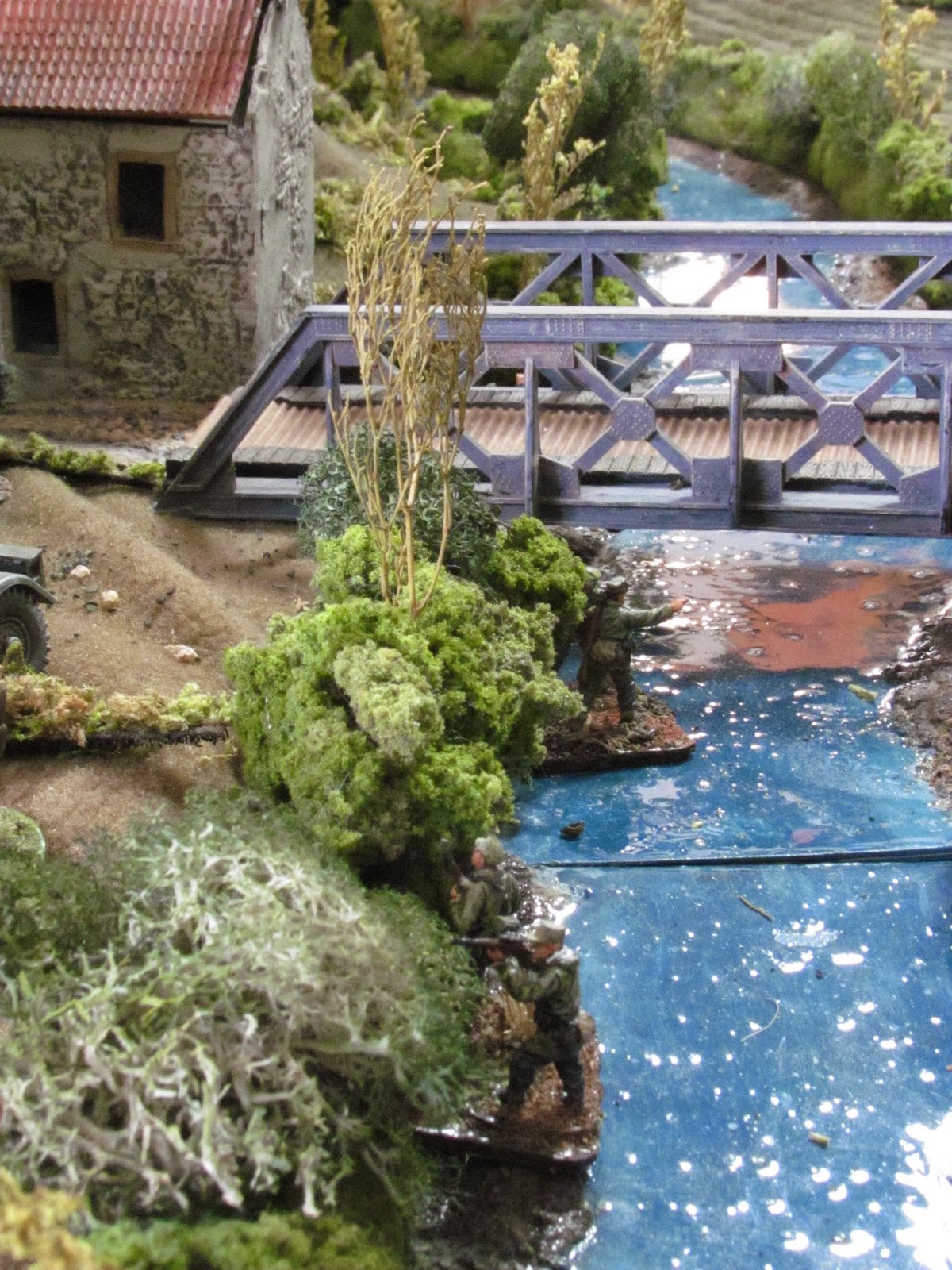 20. Germans withdraw
With the engineers having abandoned their attempt to destroy the bridge and Allied forces pressing in from all sides, the German defenders begin to withdraw across the river, leaving a couple of units to hold up the attackers. 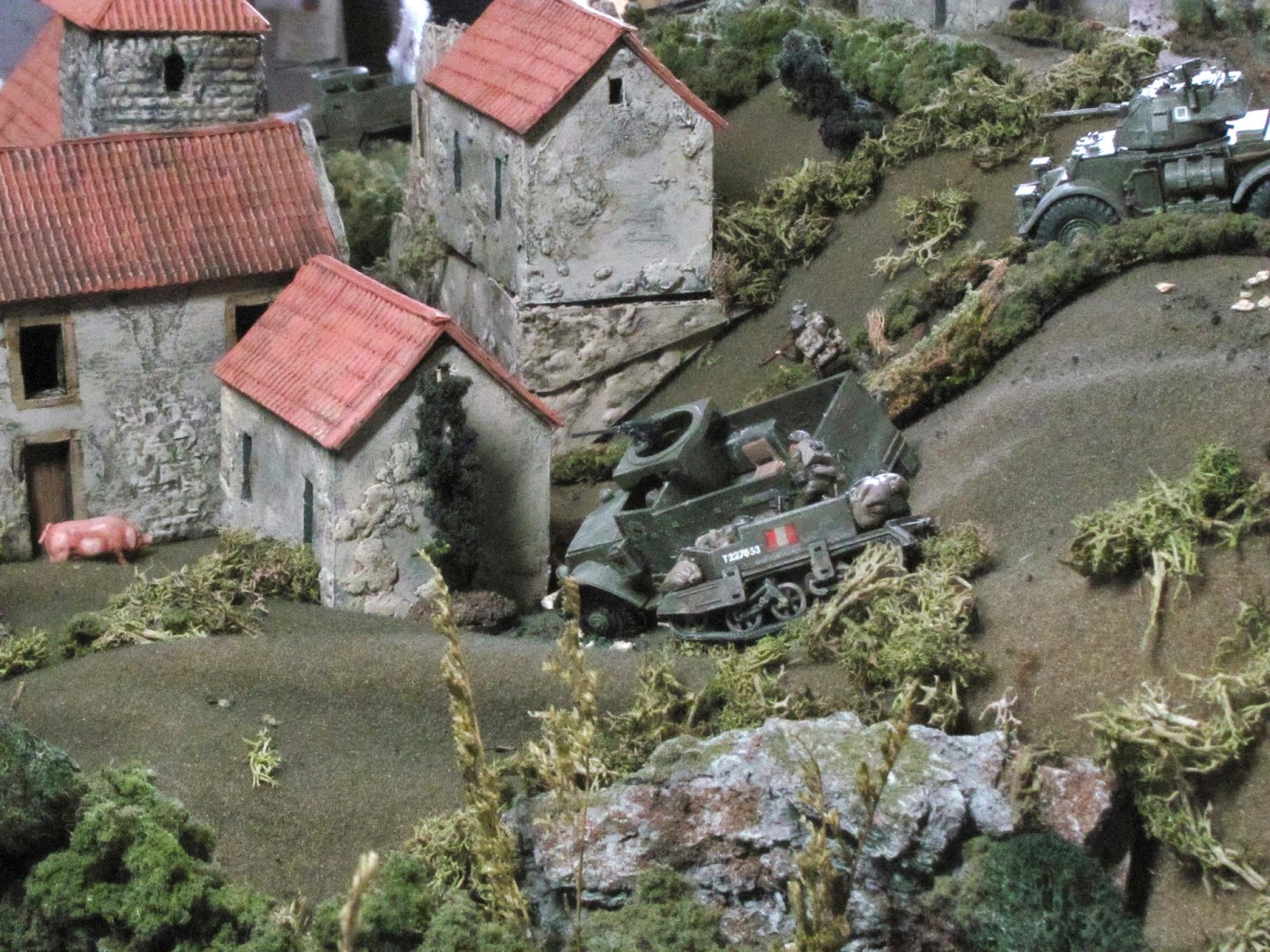 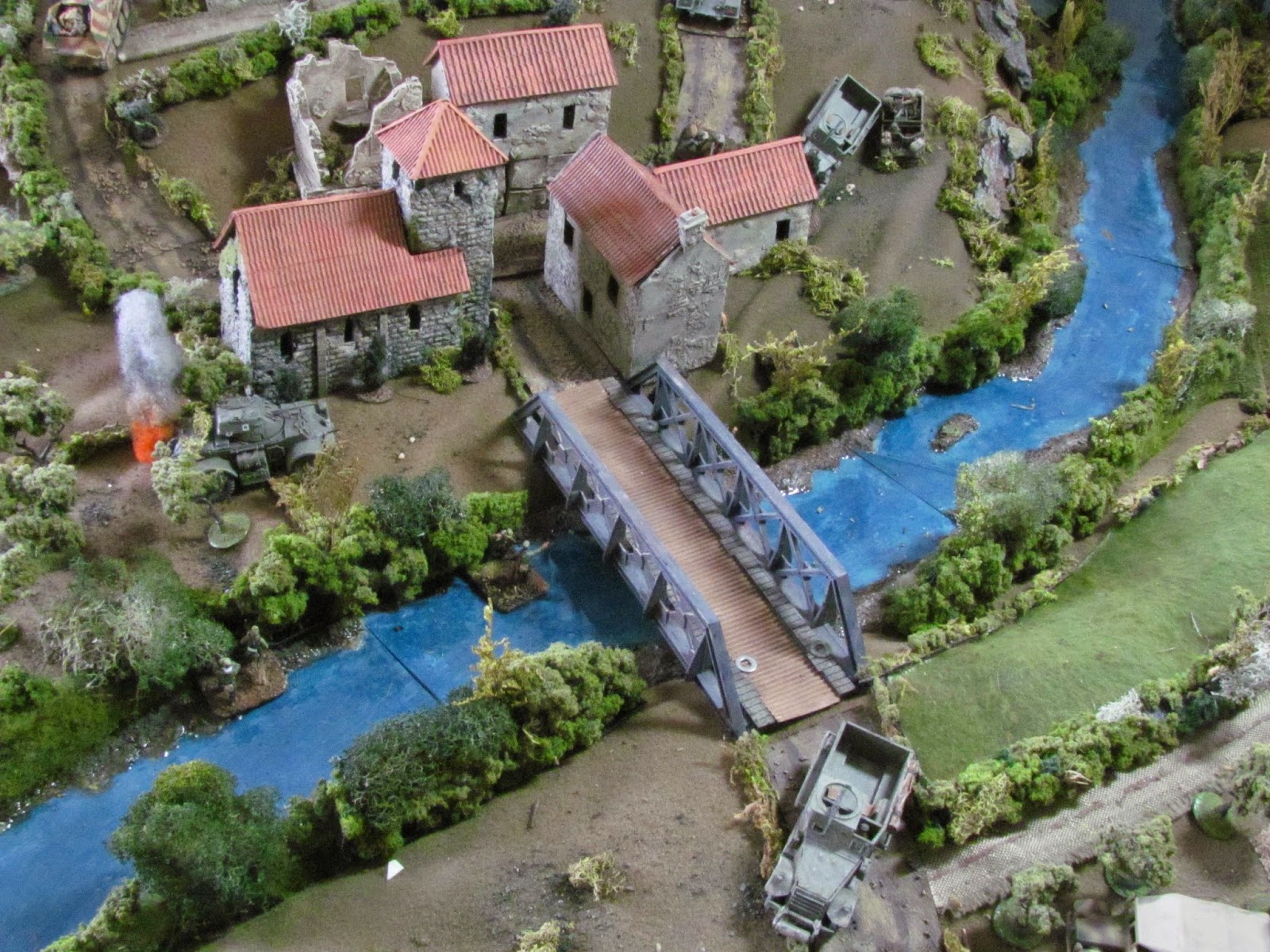 22. Game end
The game ends with neither side achieving its objective, although the Allied forces are likely to do so in the near future. The German engineers never recover from their panic and leave the bridge only three quarters prepared for demolition. The motor company took a pounding, ending the fight with only about a quarter of its forces, but the Germans took many casualties as well. In the end the Allies score a minor victory on the basis of casualties alone, slimly out-performing the defenders who needed to inflict damage at a rate of 2:1.
Posted by Bill Slavin at 7:18 AM