We replayed one of our favourite Battlefront WWII learning scenarios the other day – a quick play game set during the Battle of the Bulge, Kampfgruppe Peiper – The Sanatorium by Richard de Ferrars.
It was played in 20mm using the Battlefront WWII rule set. The game went badly for the Americans, almost entirely because of some formidable die rolling on the part of the Germans. But the game photographed nicely and gave me a chance to set up a Christmassy table.
Interestingly enough I replayed it with another player a week later, exact same German set up, and the result was the the absolute opposite! 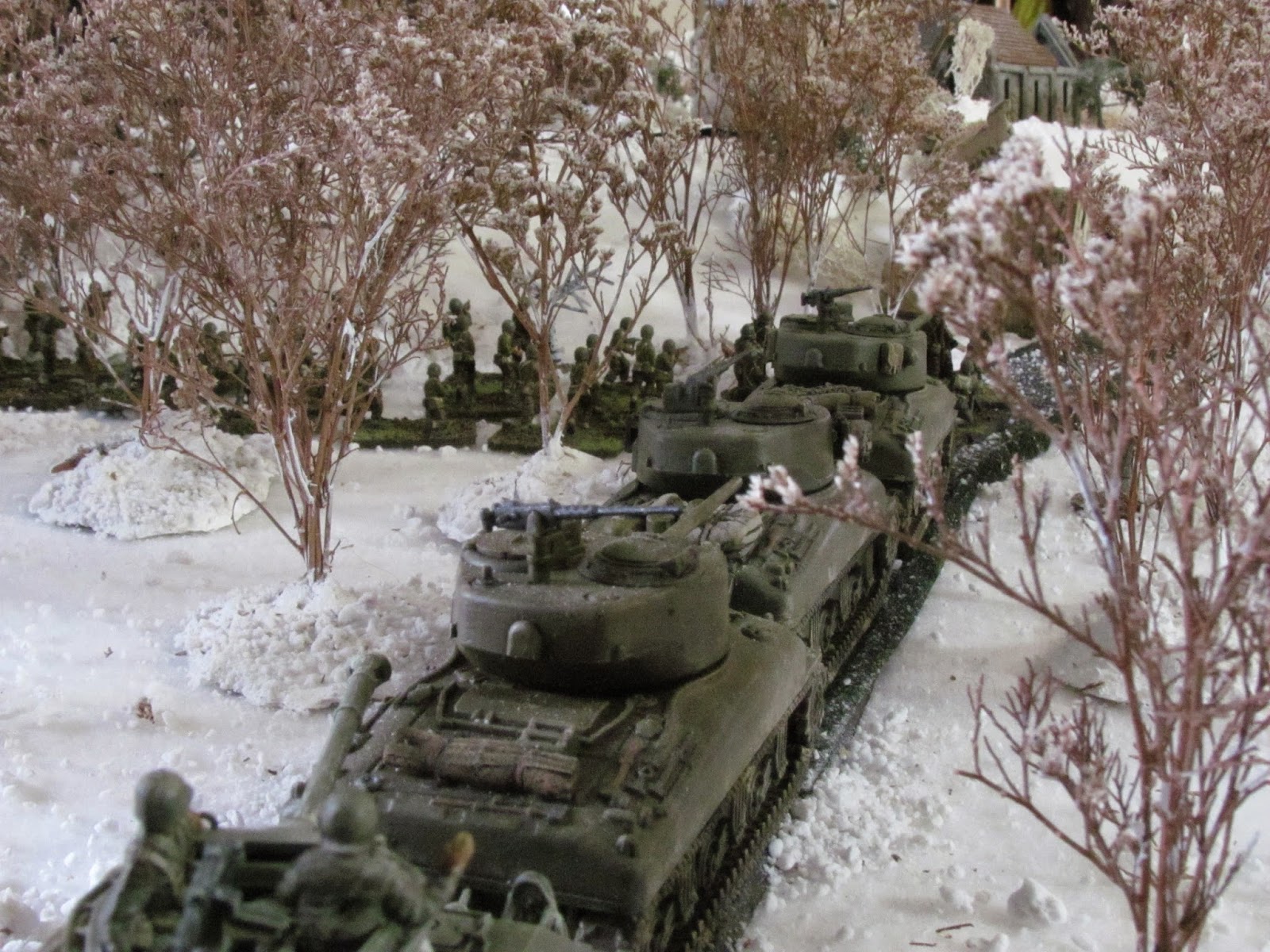 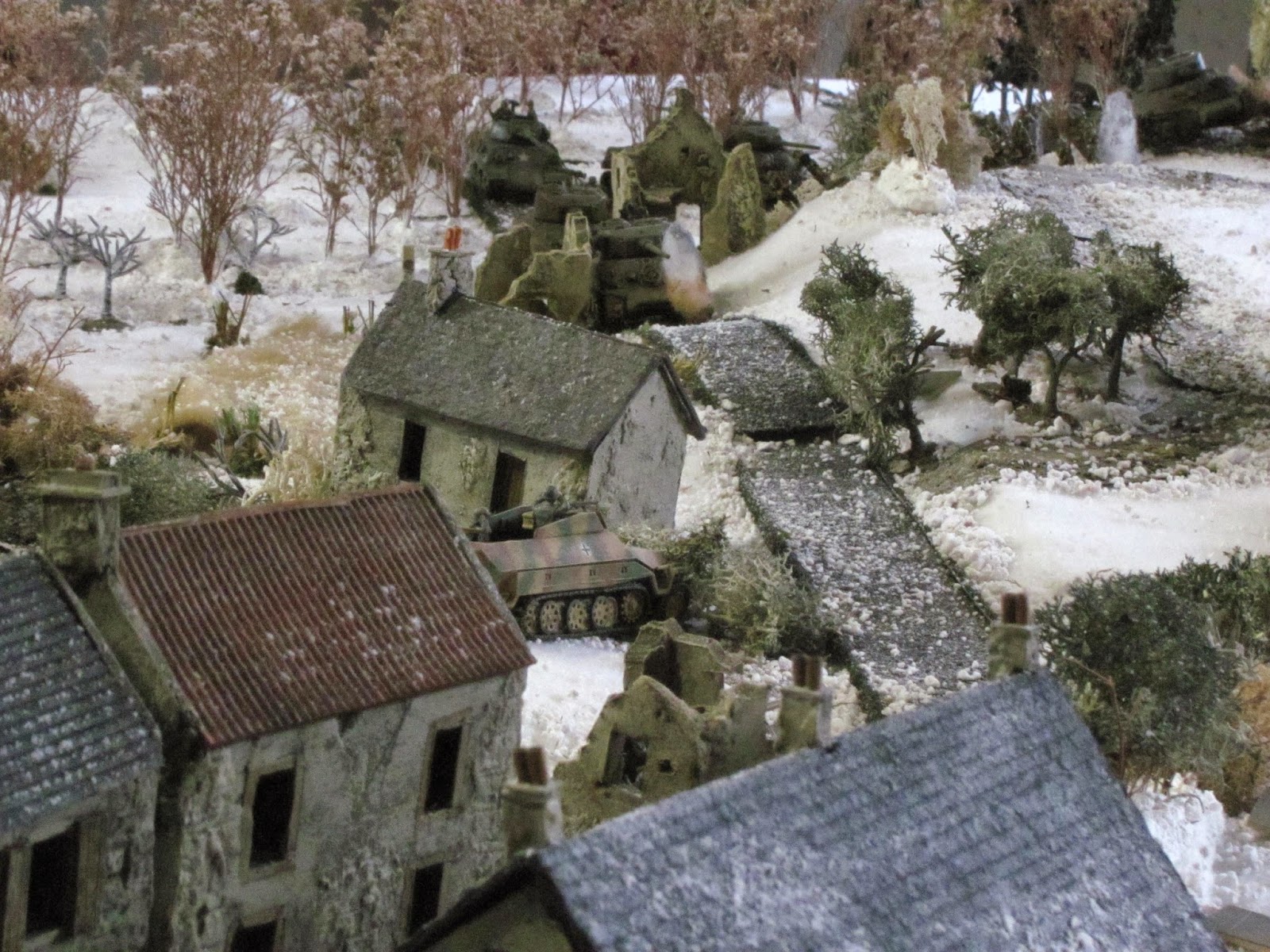 2. Germans open fire
As the American armour and infantry emerge from the woods the Germans open fire. An Sdkfz. 251/9 shells the advancing infantry of B Co. while a Pak 40 at the north end of Stoumont along with a Pz. IV on the high ground to the east fire on the armour. 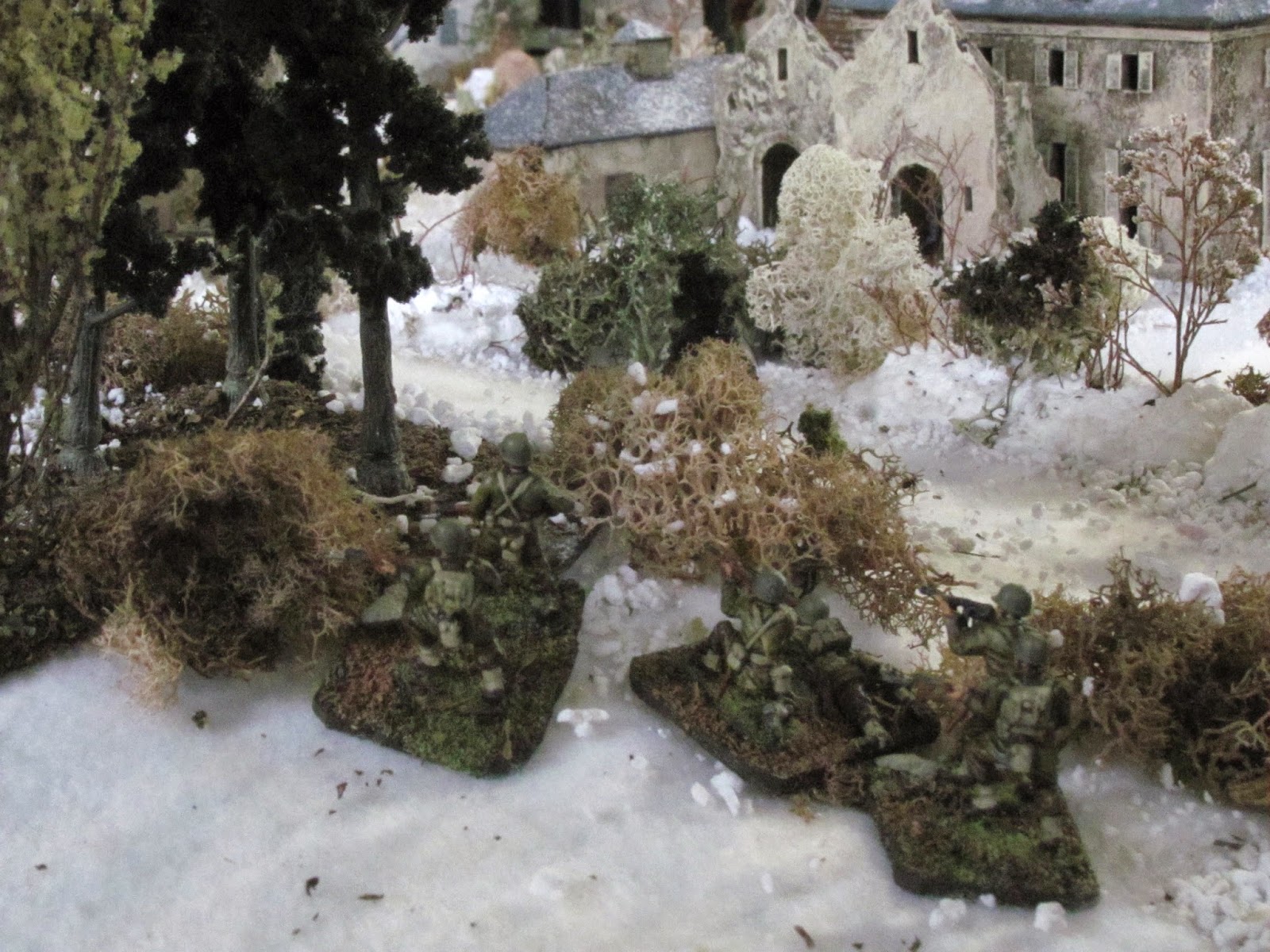 3. C Co. moves along north flank through woods
Meanwhile C Company makes its way through the woods to the north of the Sanatorium unobserved. 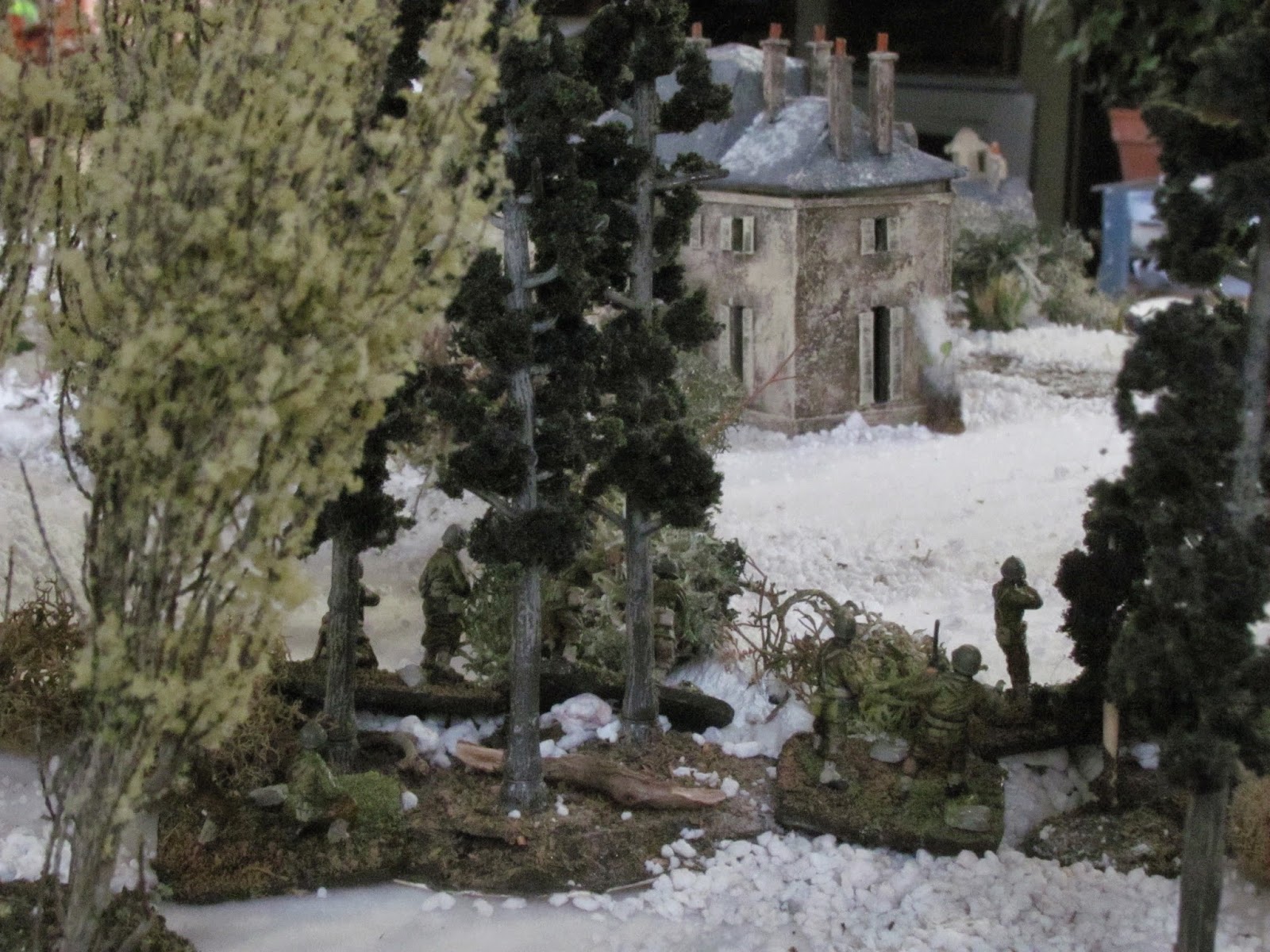 4. German MG's spotted
German machinegun fire comes from the west end of the Sanatorium, cutting up B Co.s' attack. The guns' positions are marked and suppressed by return mortar and tank fire. 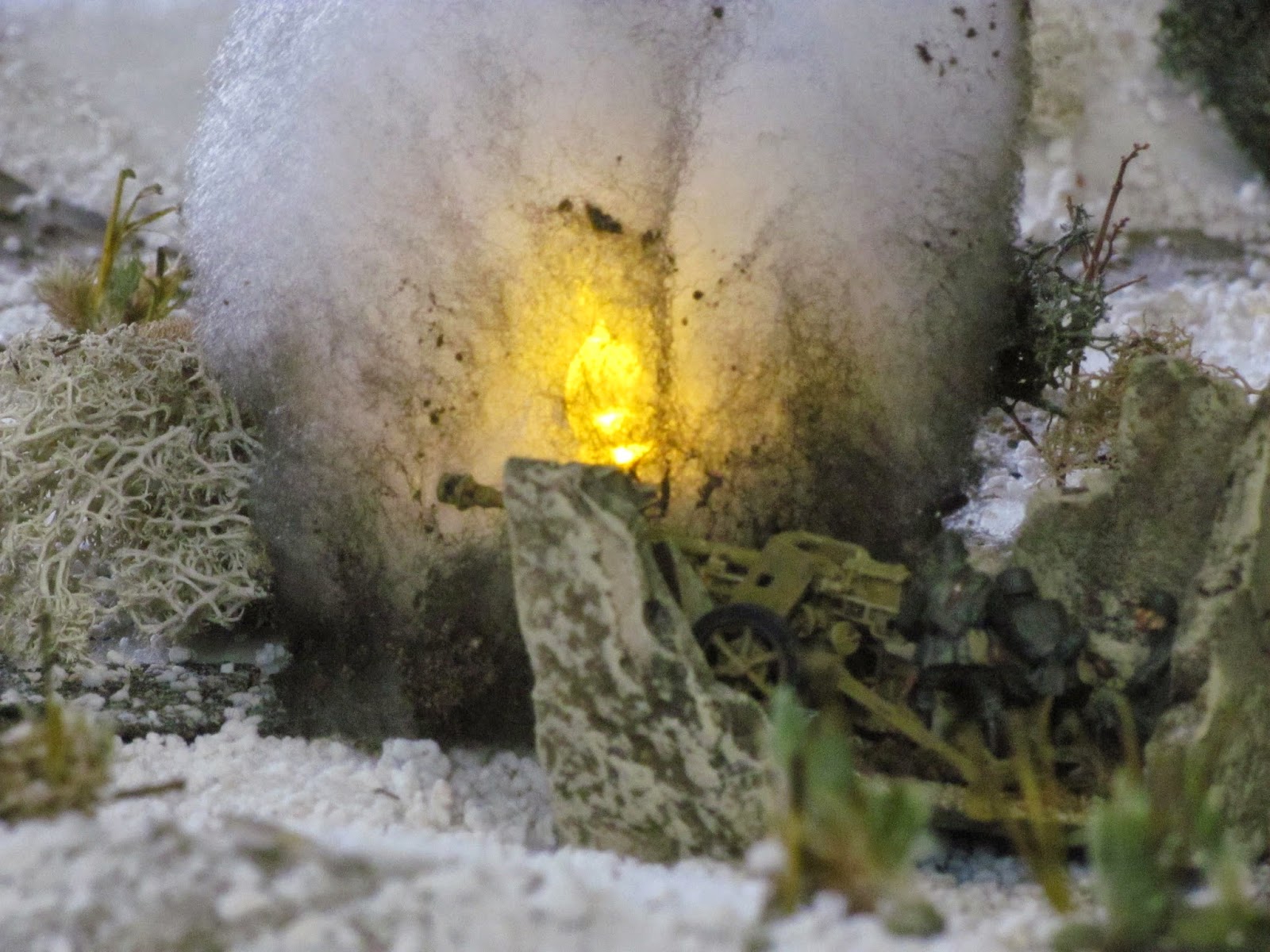 5. Pak attack!
The German PaK 40 is silenced by mortar fire before it can cause any serious damage, opening the way for the American armour to advance. 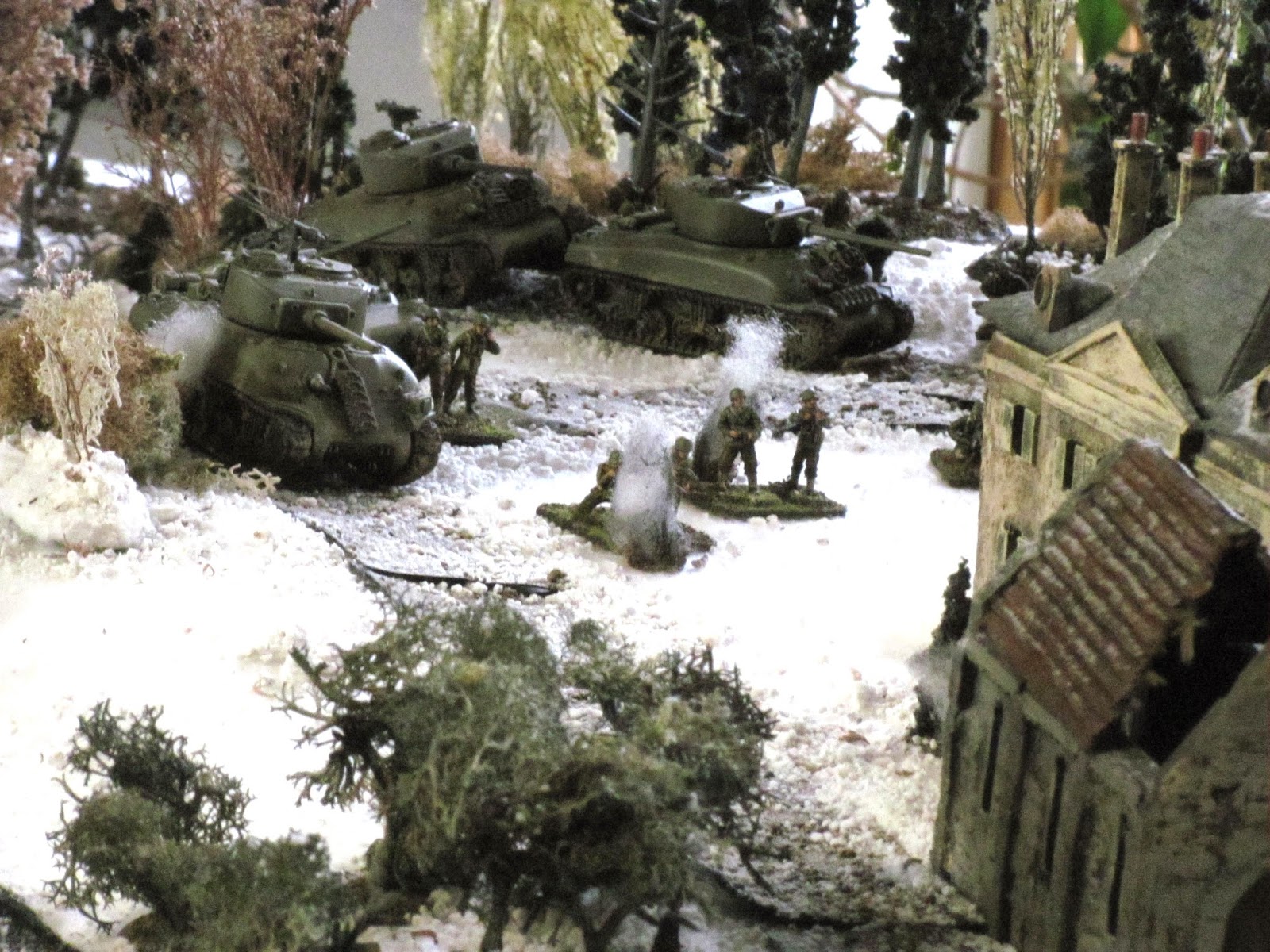 6. First assault goes in against Sanatorium
The Shermans of C Co., 740th Tank Battalion struggle up the sloppy slopes, some bogging down as they move to support B Co's attack. The German small arms fire is deadly accurate and American casualties start to mount. 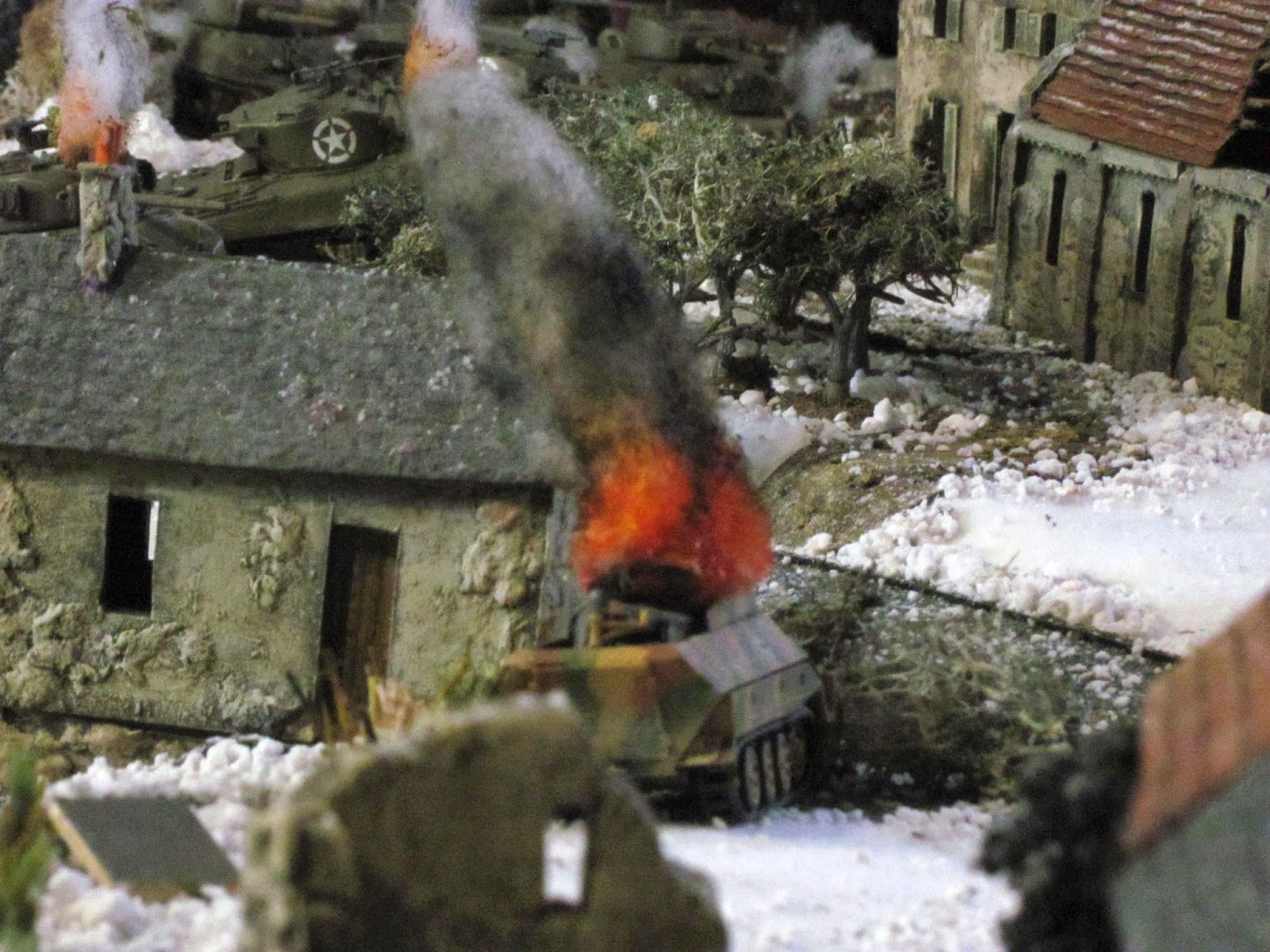 7. Sdkfz. 251/9 KO'd
With the antitank gun knocked out, the armoured halftrack turns its 75mm gun on the approaching armour, slowing them down. But it is no match for the tanks and is quickly set aflame. 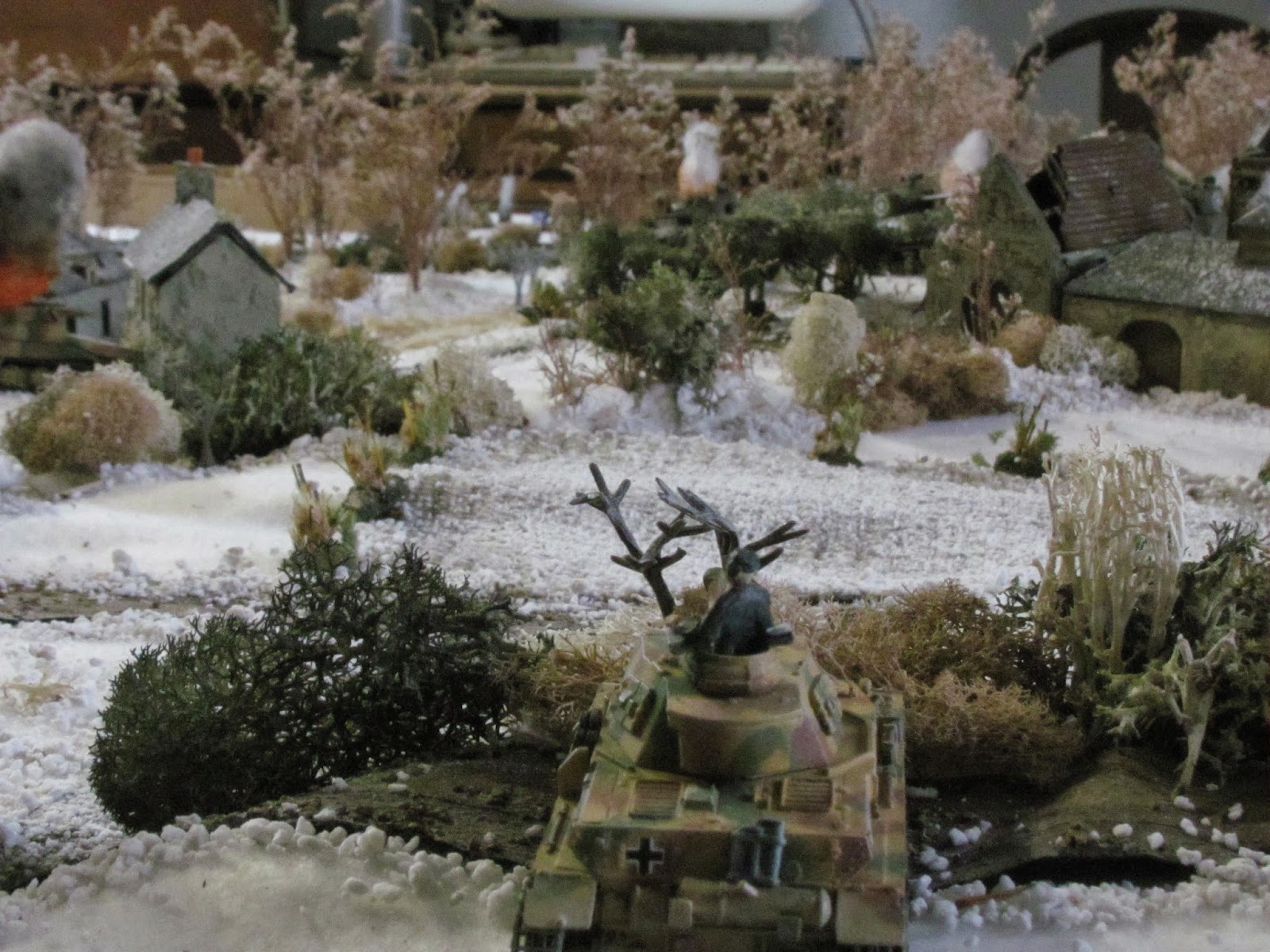 8. View from the high ground east of the Sanatorium
The lone Pz. IV continues to shell the American armour from a distance, but both sides are too far apart to do more than harrass. 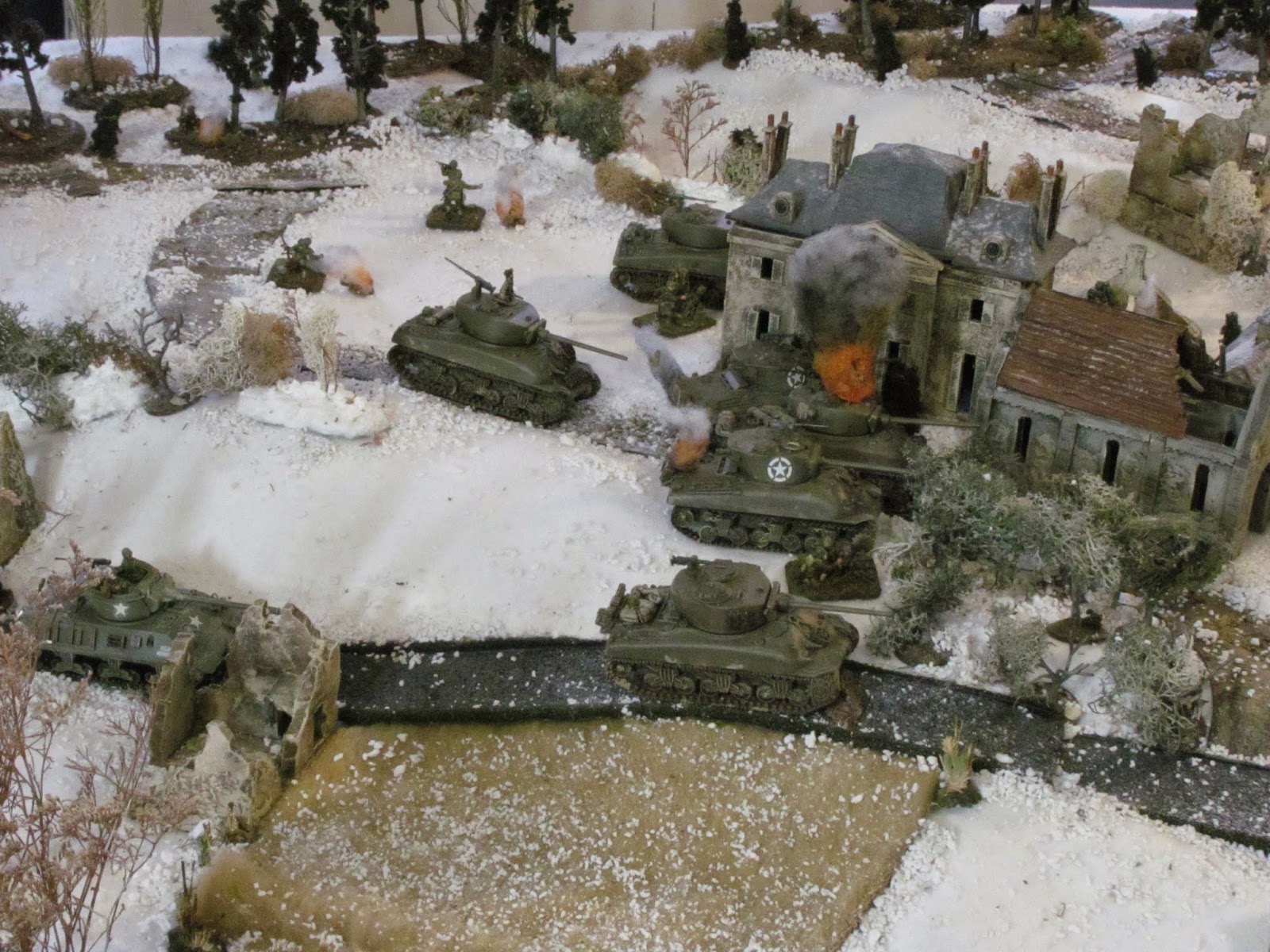 9. Sherman KO'd as attack breaks down
Some of the Shermans move in in close support of the battered B Co., but the Germans drop back deep, drawing the tanks into panzerfaust range. The first American tank is knocked out as most of the remainder of B Co. lose nerve and flee. C Company has more success north of the Sanatorium, moving in from behind to knock out a German mortar position before executing a failed close assault on the northeast corner of the objective. 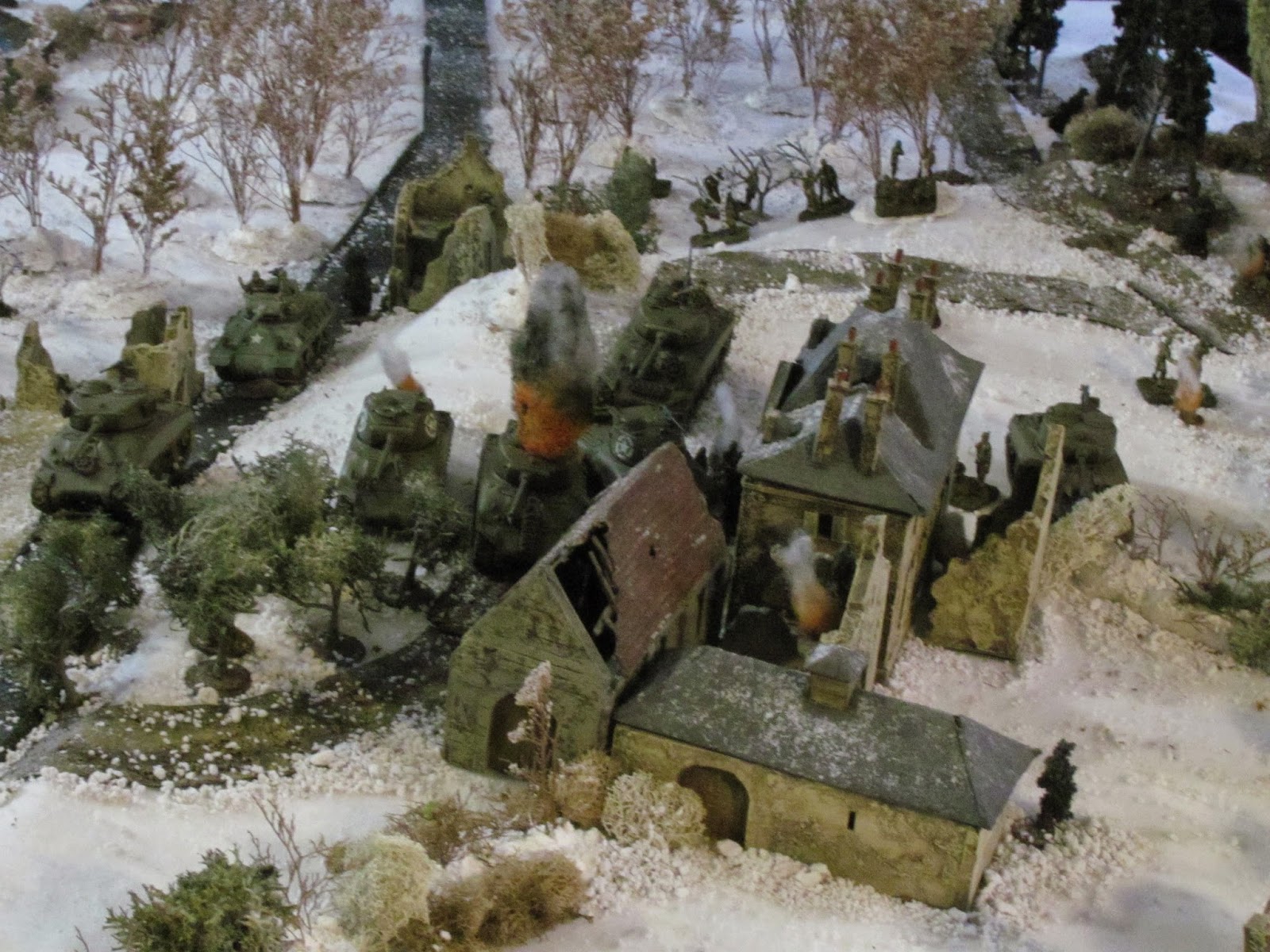 10. Overview
One Sherman is in flames as much of B and C Co. retreat back to the woods. Those infantry who hold tight manage to secure a hard fought foothold in the west end of the Sanatorium, as the remaining German pioneers garrisoning the buildings drop back, trying to hold on to the east end of the complex until help arrives. 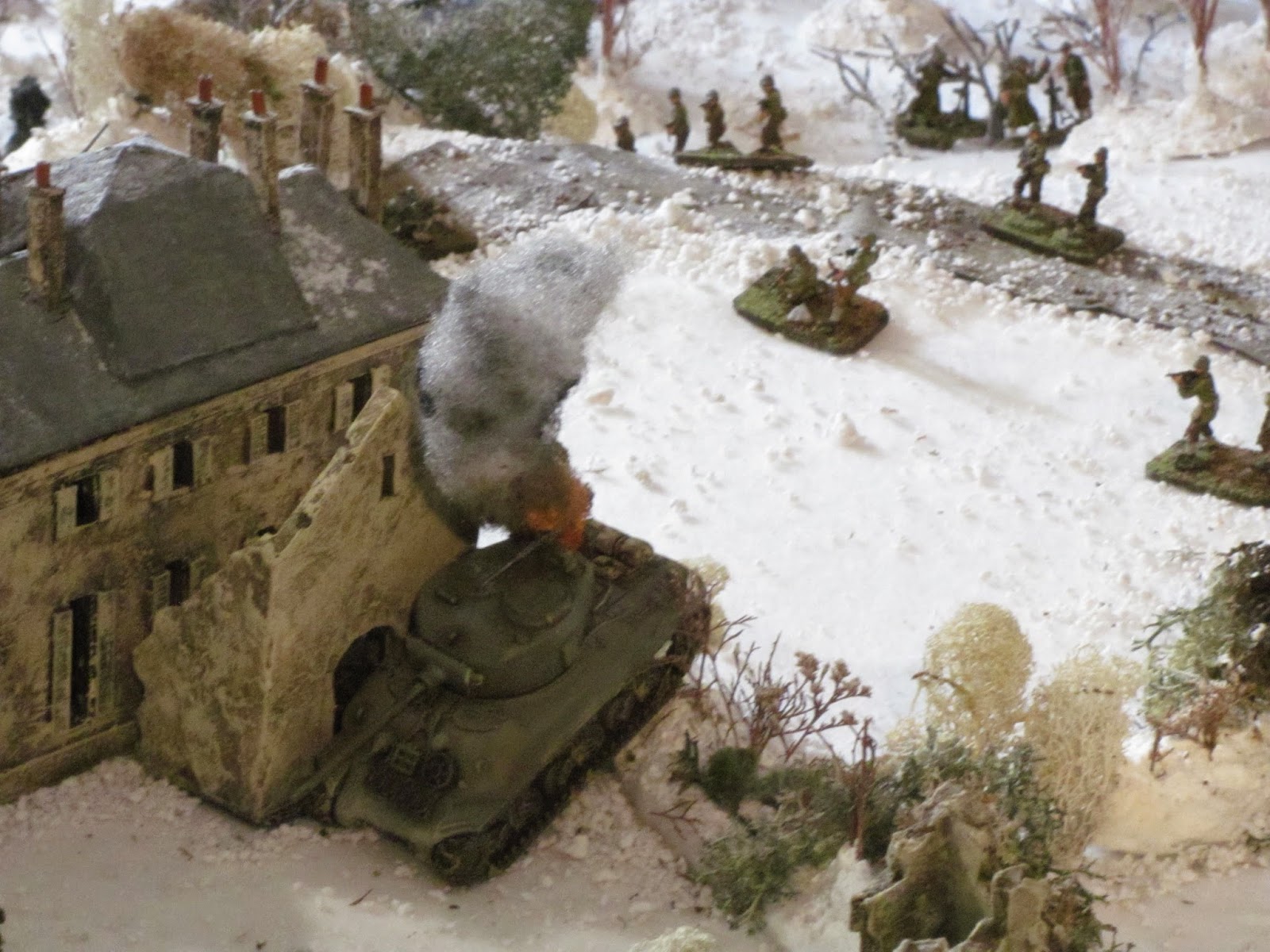 11. Second Sherman KO'd
A second Sherman is KO'd by the Pz. IV as the tank attempts to move around the north side of the Sanatorium. In the background can be seen surviving elements of B and C Co. rallying and advancing back towards the fight. 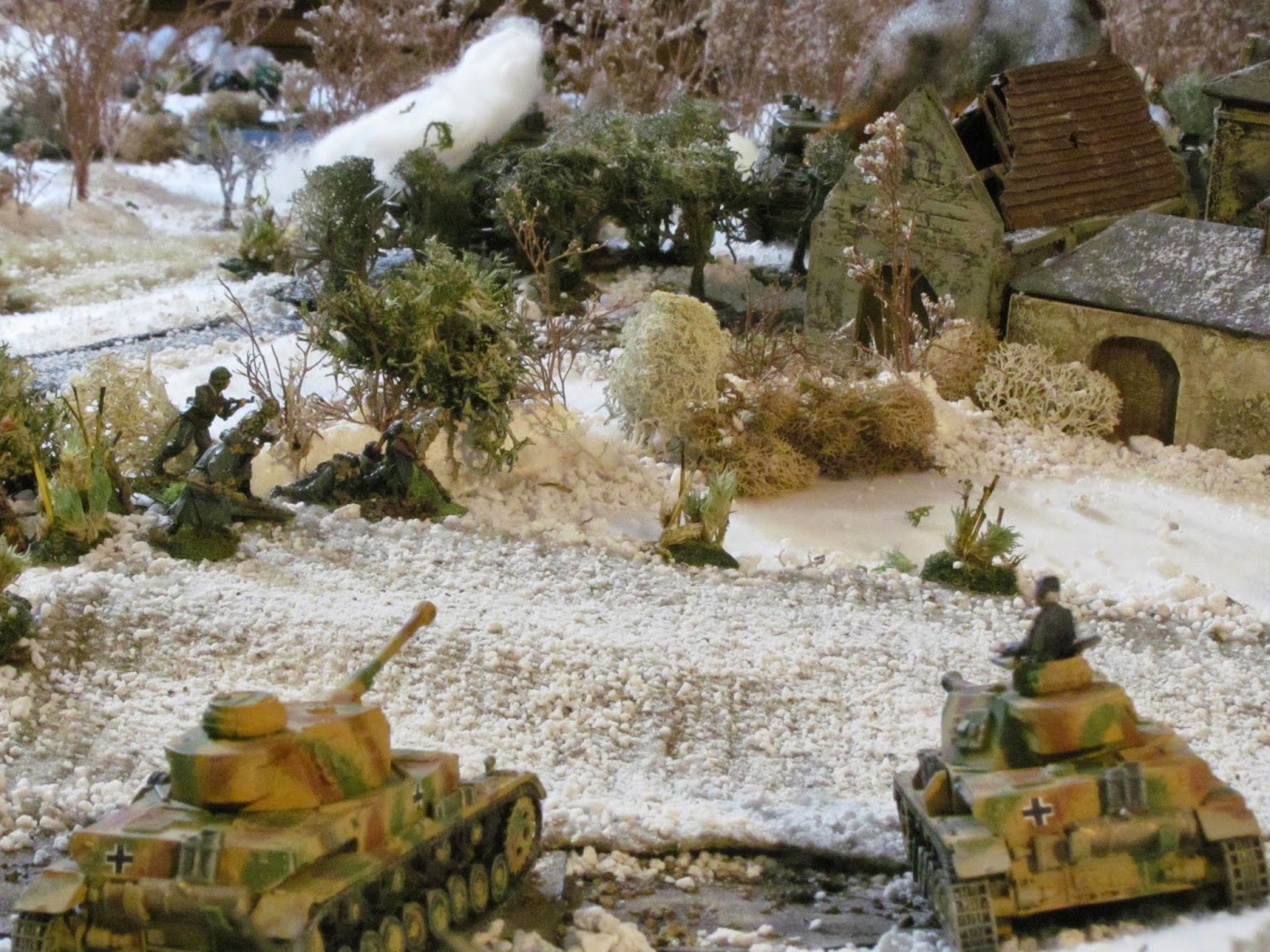 12. Reinforcements arrive
Things are looking bleak for the Americans as German reinforcements from Stoumont and armour from the direction of Rouat arrive to support the units still fighting it out in the Sanatorium. 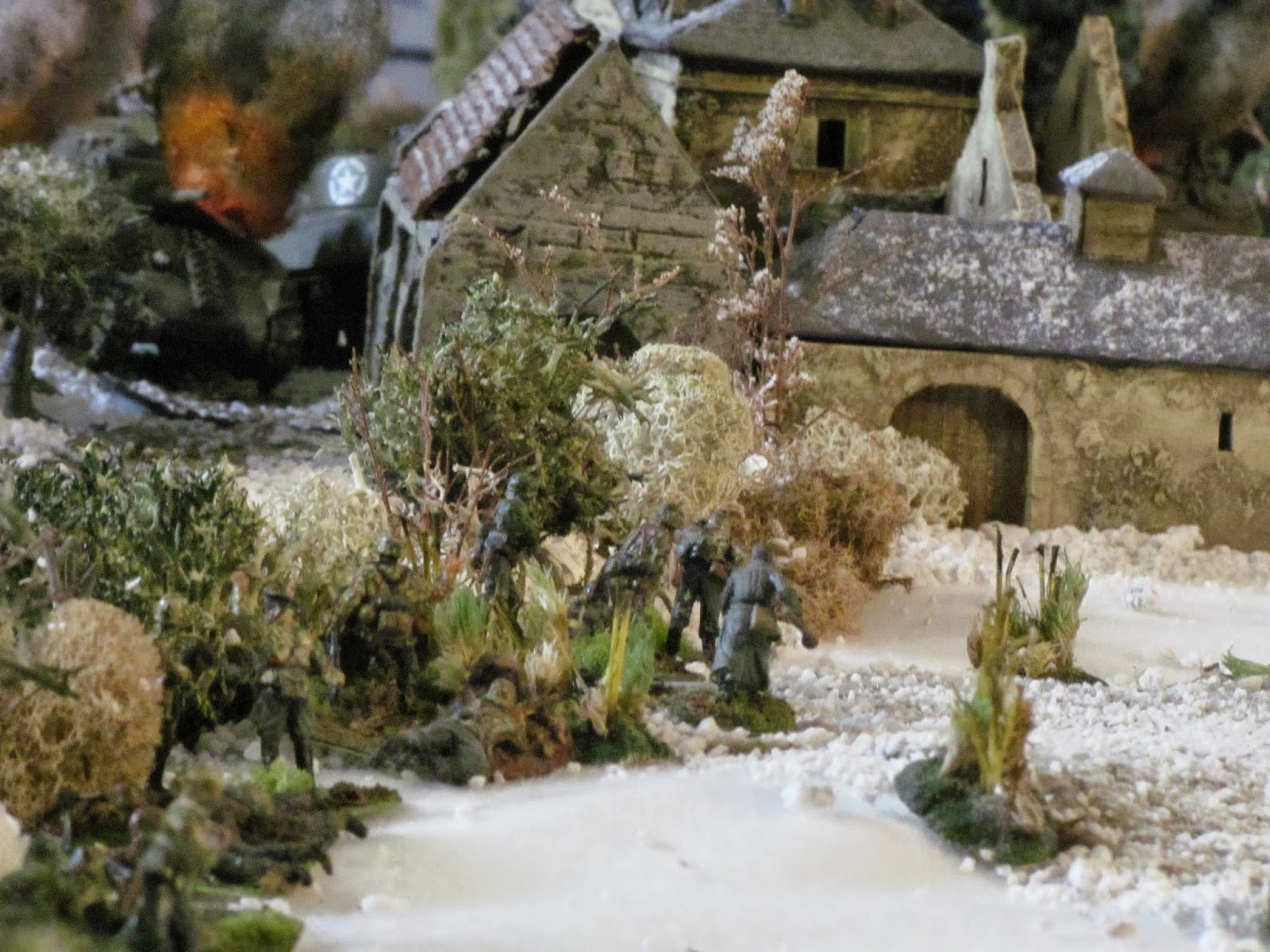 13. Sprinting to the Sanatorium
Under cover of a low hedgerow, infantry from 9 Kp., SS-Pz-Gren Regt. 2, make a dash towards the east end of the Sanatorium. 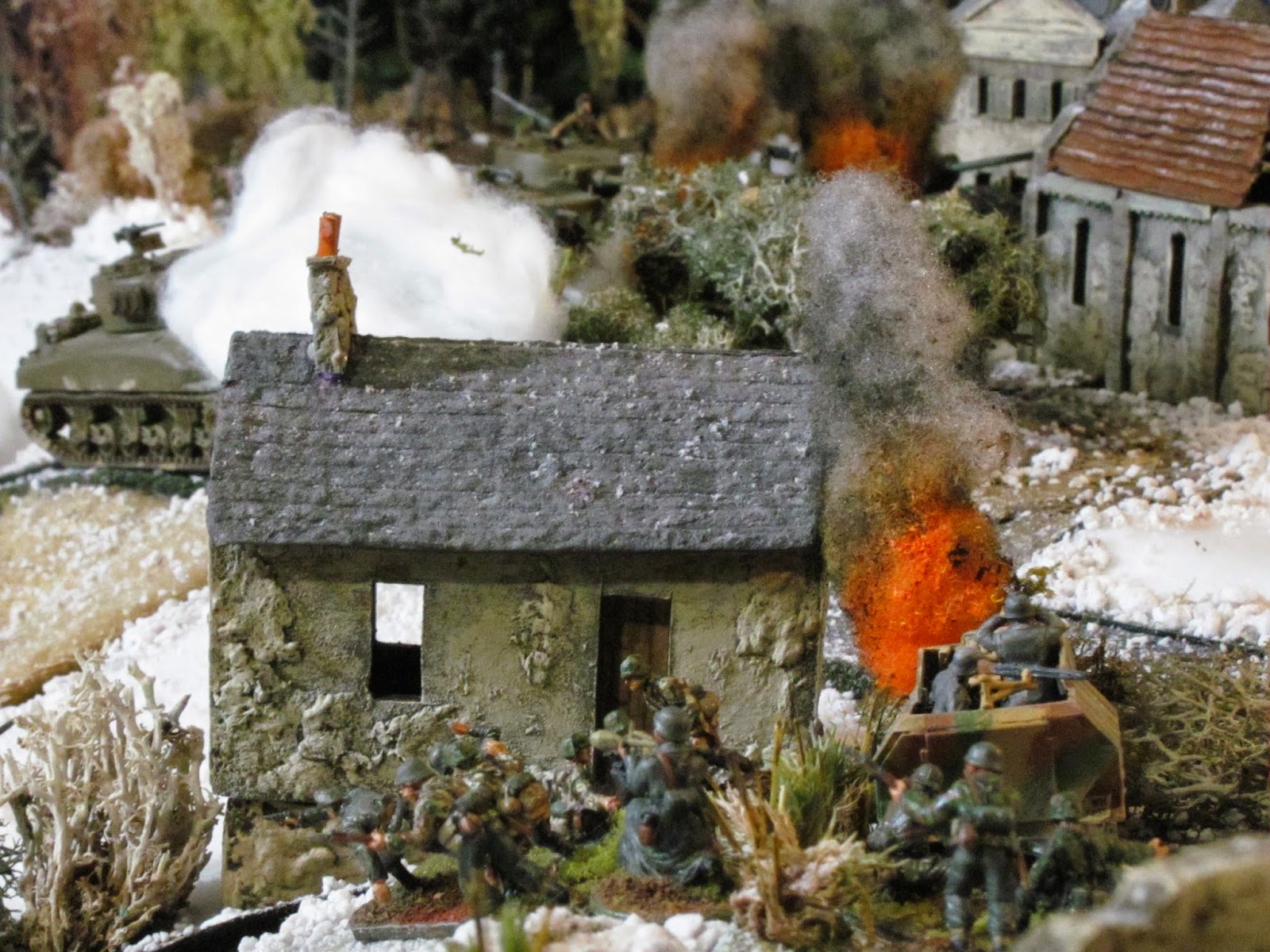 14. Tank-hunting party
A second group of infantry breaks off to the west, to engage the American armour that has gone hull down on the paved road south of the Sanatorium. 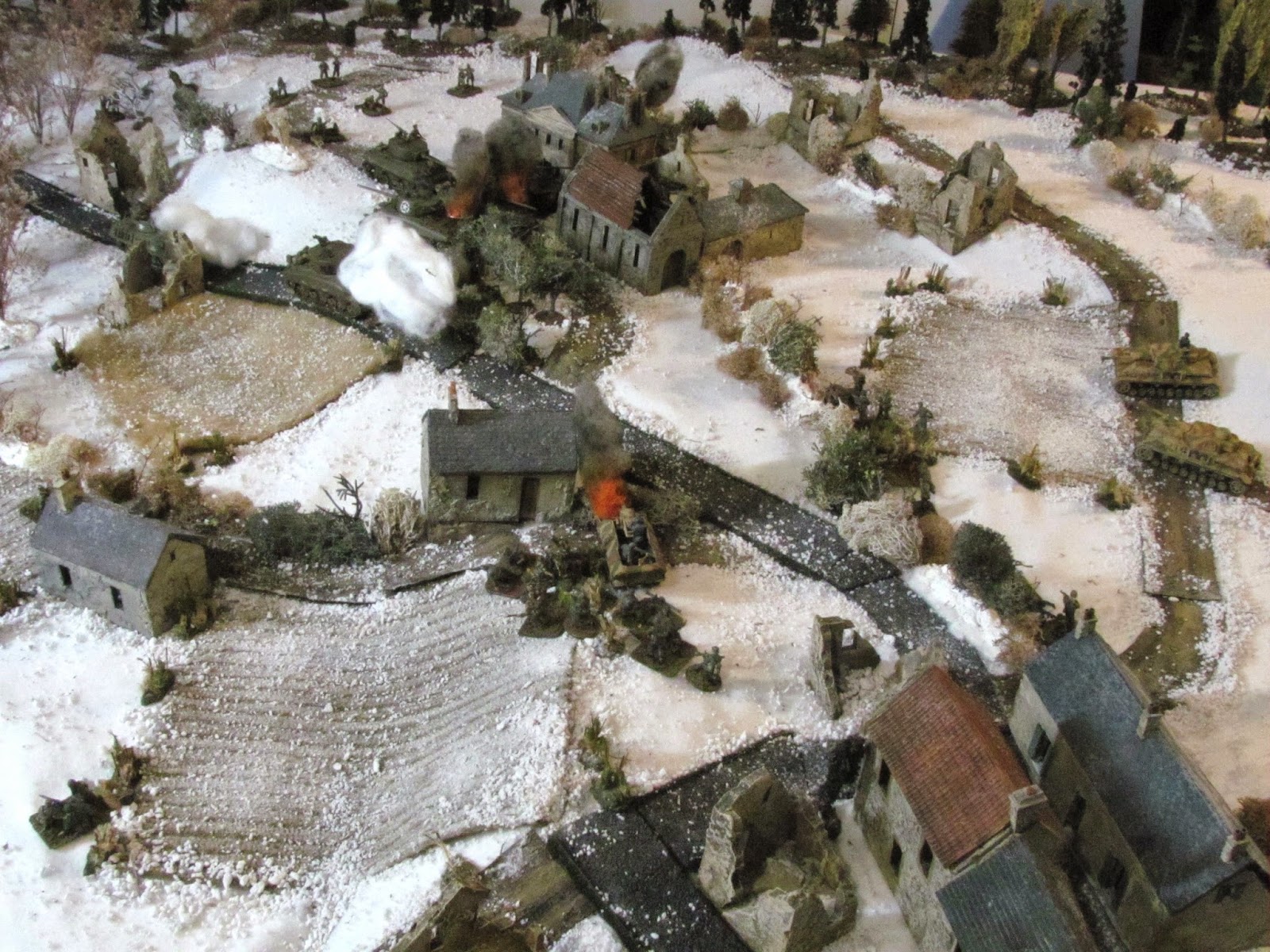 15. Counterattack overview
In the lower centre one group of the reinforcing infantry moves past the burning Sdkfz. 251/9 towards the armour south of the Sanatorium while a second group (centre right) moves to support the pioneers in the Sanatorium. Under cover of smoke laid down by the German mortars, the German armour (far right) moves forward to take up more advantageous positions closer to the action. 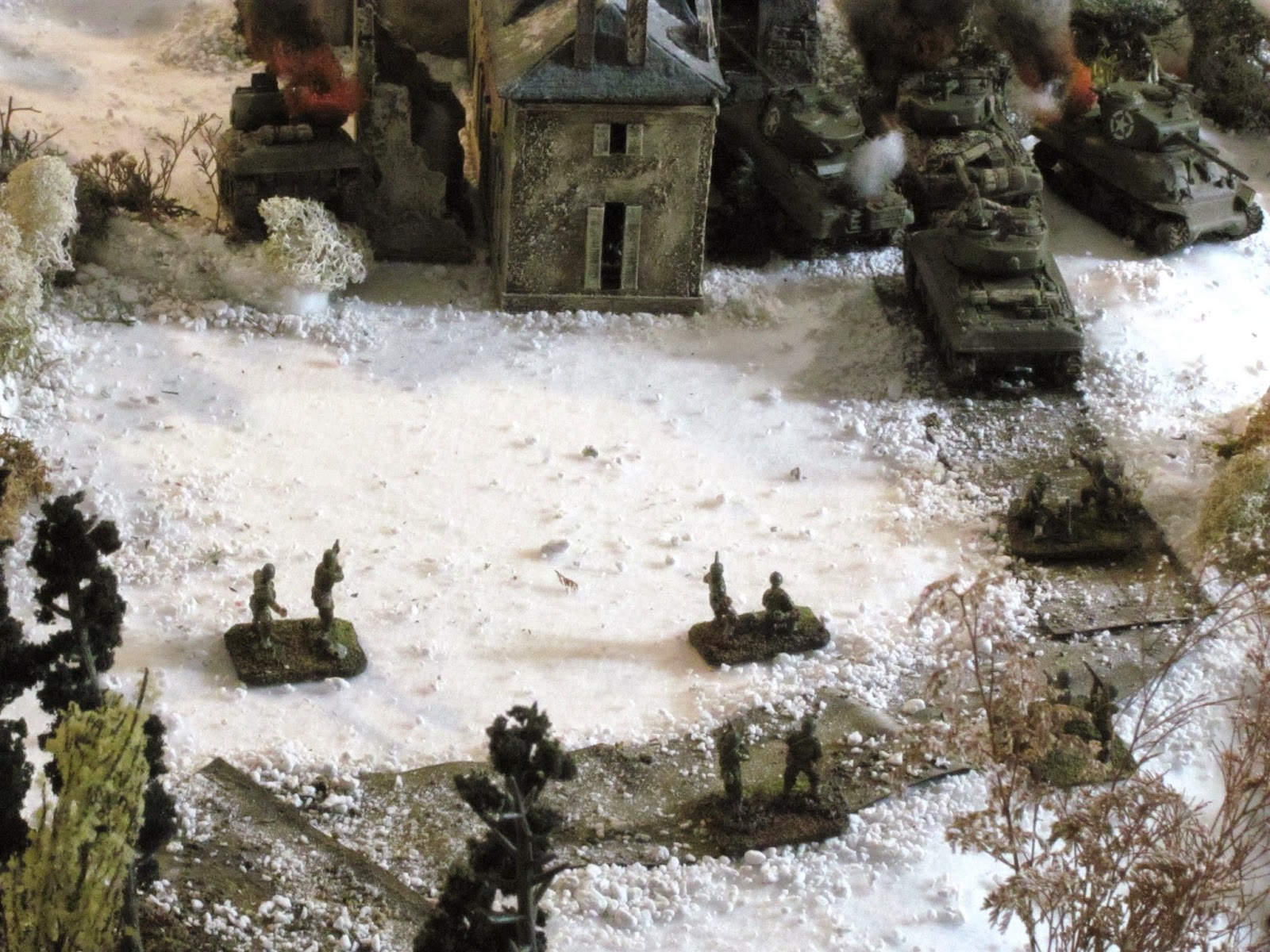 16. B Co. rejoins the attack
Stragglers from B Co. re-emerge from the woods to bolster the failing attack on the Sanatorium. But bad luck continues to plague the Americans as a third tank (upper right) fails a maneuver roll and turns to flee, getting knocked out by the waiting panzers. 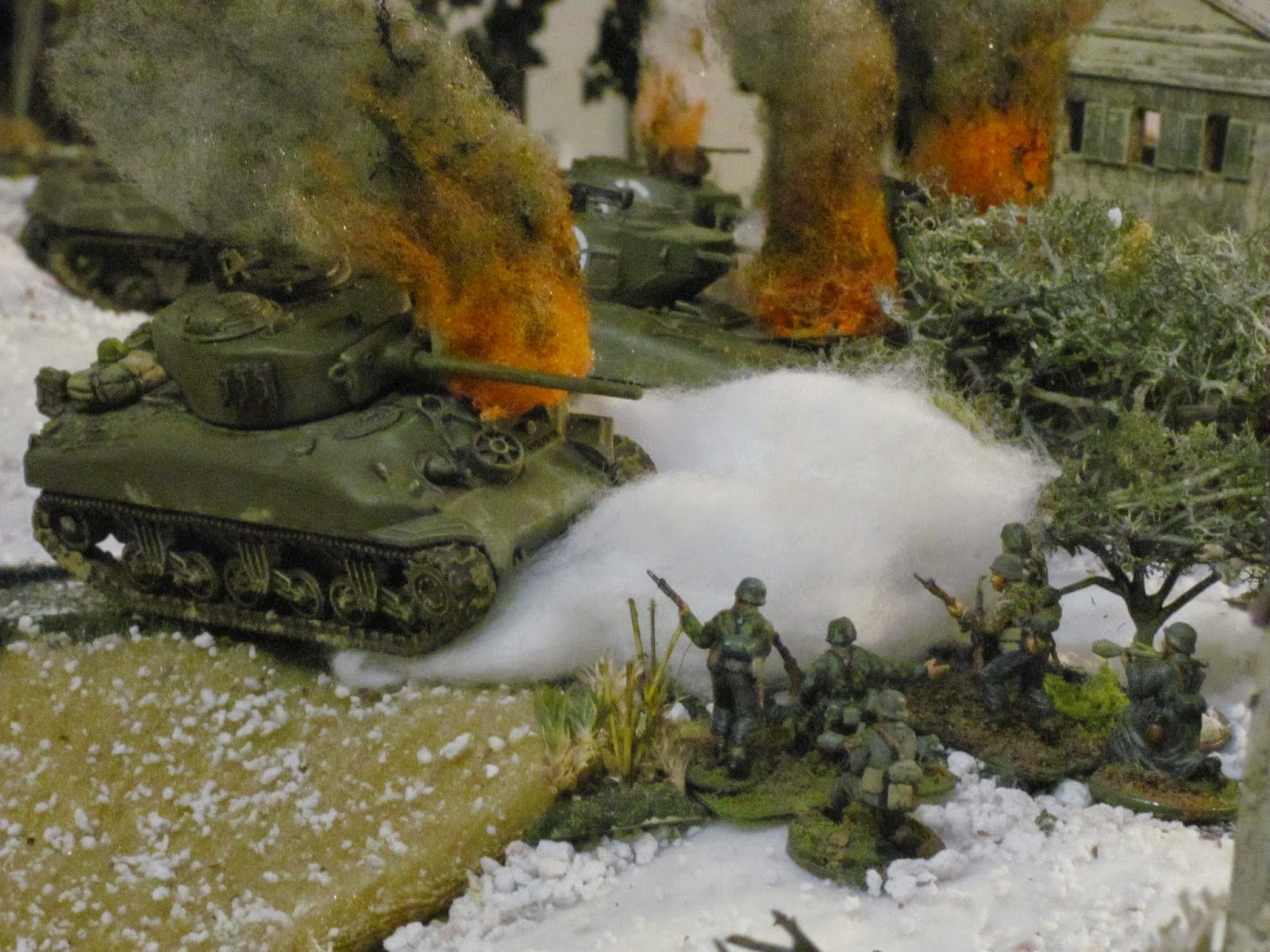 17. A fourth tank down
An American tank on the south road falls to close assault from the German infantry after being disordered by Pz. IV fire. 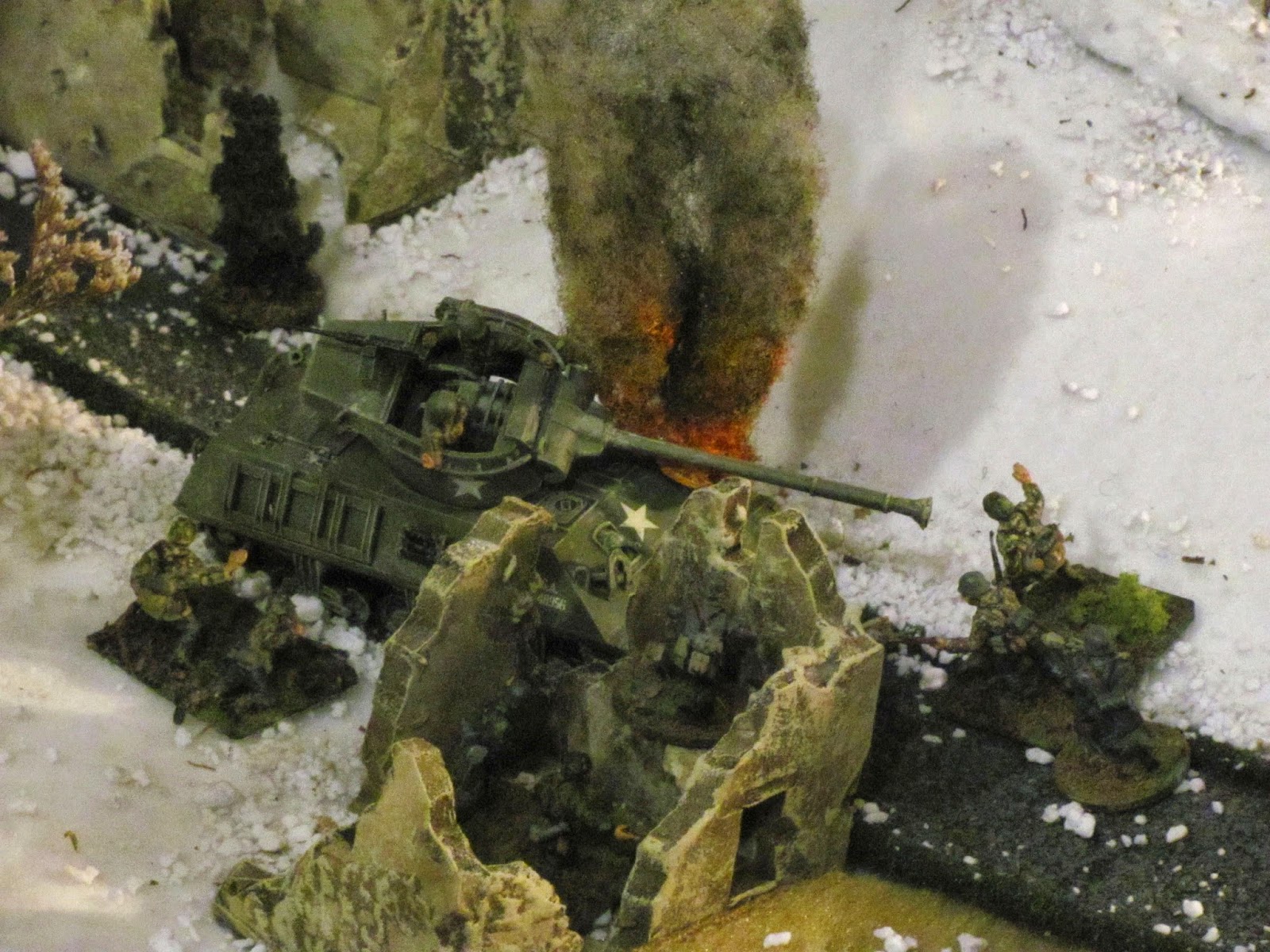 18. And Jackson goes up in smoke
As does the Jackson, close assaulted by the same group of tank hunters on the next turn. 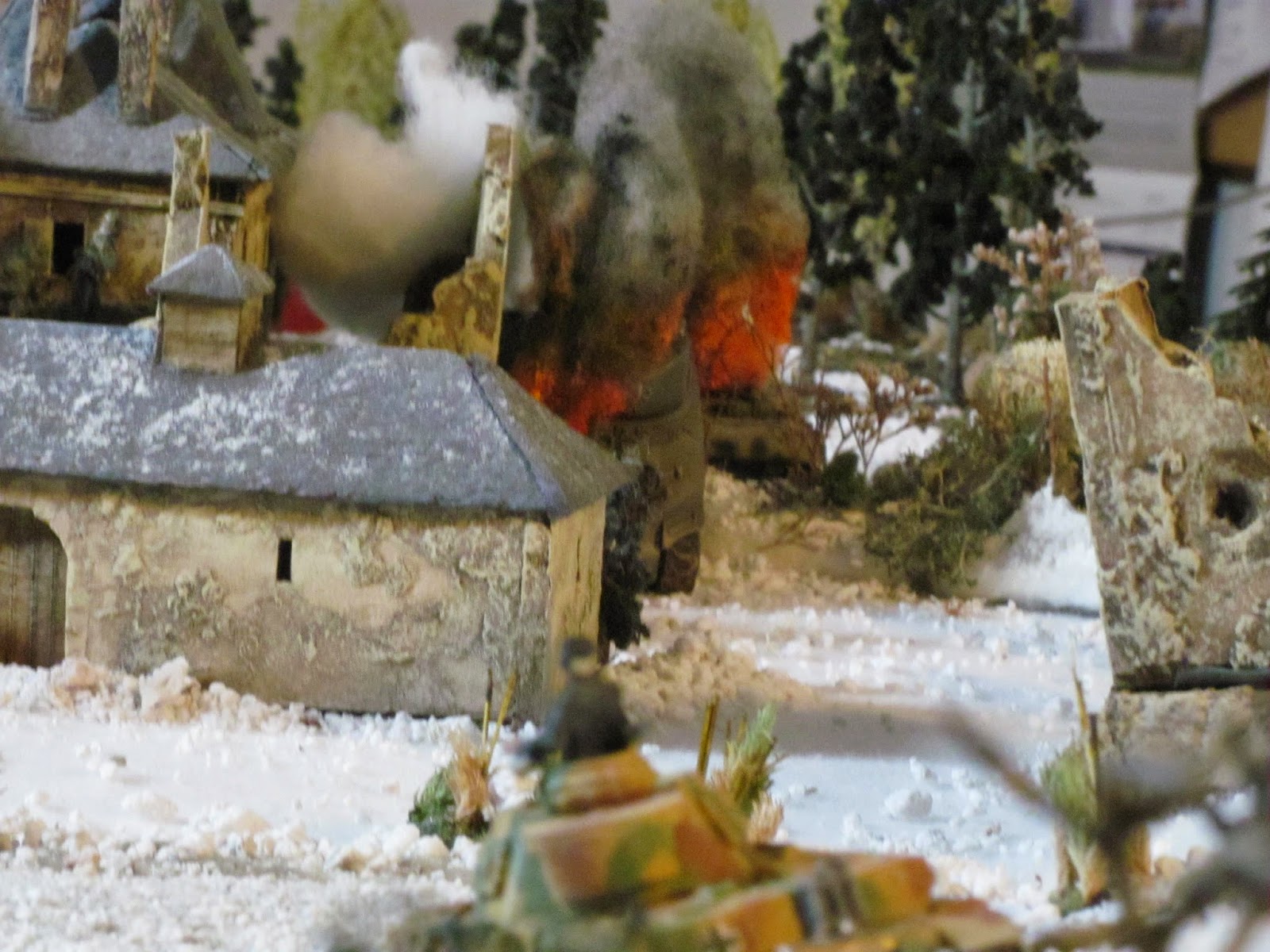 19. American command tank KO'd
The sole remaining Sherman is put out of action by a Pz. IV as it tries to make its way around the north side of the Sanatorium to lend support to the infantry desperately trying to retain a foothold in the complex. 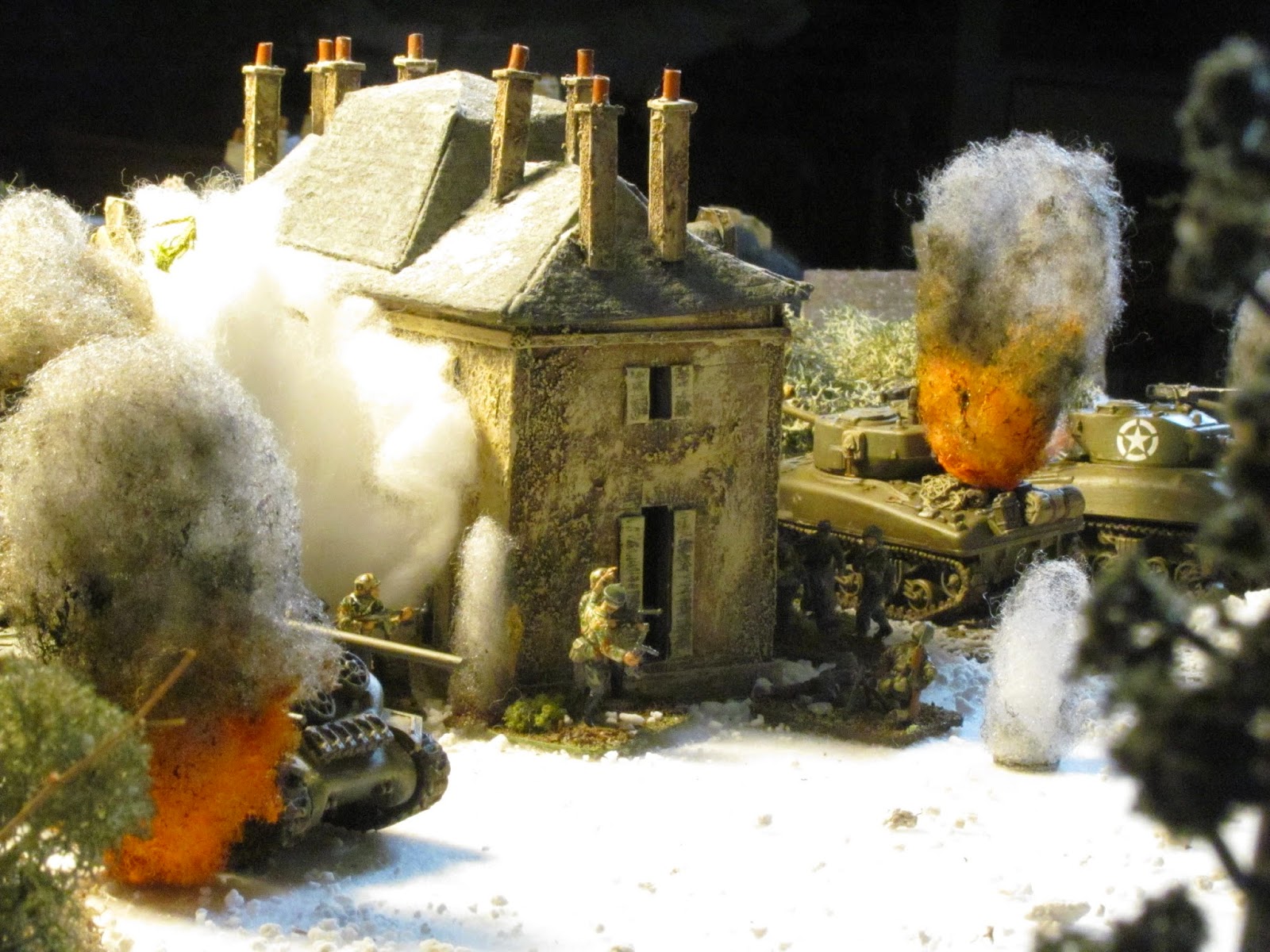 20. End game
With no American armour support left the German reinforcements pour in and around the Sanatorium, dispatching the battered Americans and seizing the building complex in its entirety. 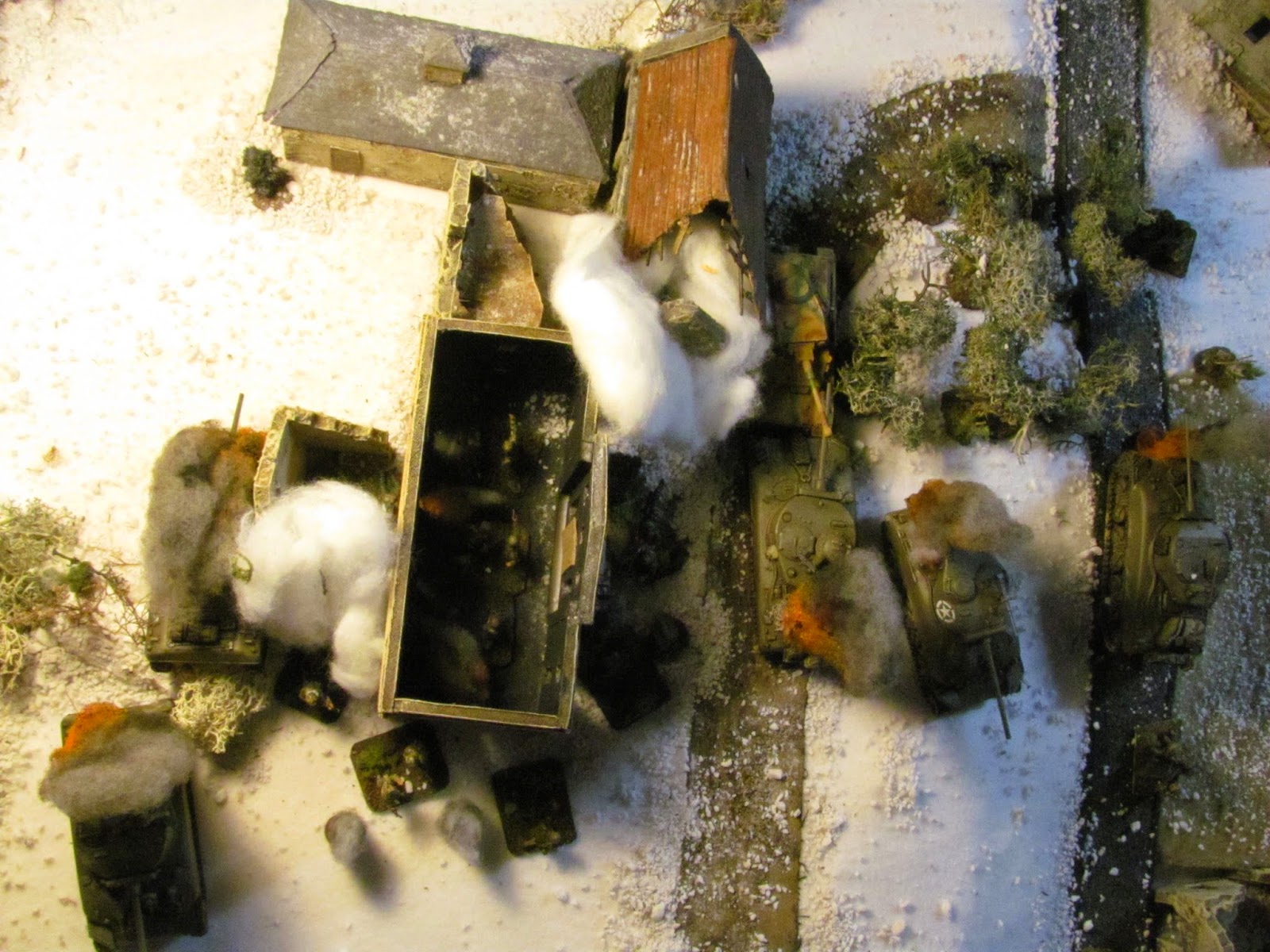 21. Battle's conclusion
Surrounded by burning Shermans one of the Pz. IV's advances on the objective, but its help isn't needed. A seen from above, the last of the American attackers succumb to close assault and the Sanatorium returns to German control. A tough game for the American player as luck abandoned him at every turn and sat firmly on the German player's shoulder through out.