Here is an after action report from our most recent game, a replay of Andy Parkes' Route Leopard, written for the Battlefront WWII rules system.

Based on the 1st Parachute Battalion's move to fight their way into Arnhem and the German attempts to throw together a blocking force, this scenario is fairly unique in that the German reinforcing elements are determined randomly (based on elements that were actually present and available in the area). Although British orders were to proceed along the Amsterdmsweg, an early German demonstration of armoured halftracks in this game sent the paras along dirt tracks bordering the railroad to the south, in an attempt to circumnavigate the defenders.

This scenario was a great deal of fun to play out, so much so that I played it a second time solo with a very different result! These pictures are from our refereed game. 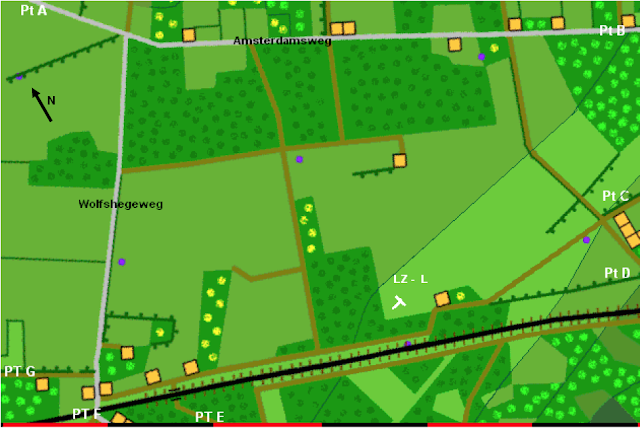 Route Leopard looking east, with the distant high ground the objective. The Wolfshegeweg is the paved road in the foreground, running north and linking up with the east/west paved Amsterdamsweg running through the woods in the distance. A high railway embankment also runs east/west through the course of the battlefield. 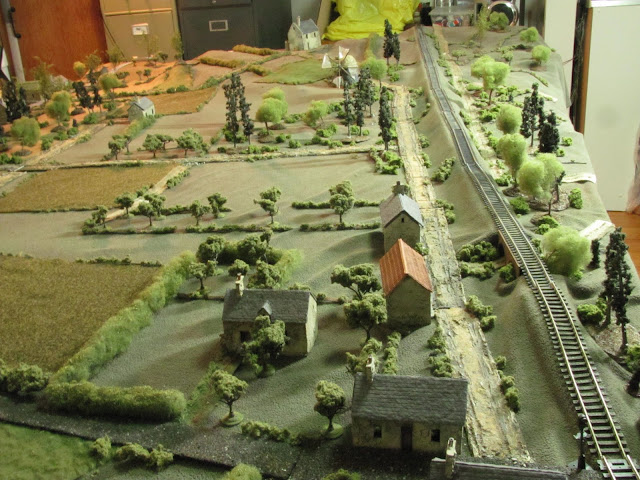 The Germans lie in immediate ambush as the lead Airborne element, C Troop of the first A/ Recce Sqn., crosses the railway. The first jeep is shot up by German armoured halftracks as the following vehicles scramble for the shelter of the orchards and buildings. It is the German commander's intention to deny the British the Amsterdamsweg and herd them along the narrow strip bordering the railway and into the arms of the waiting German infantry. 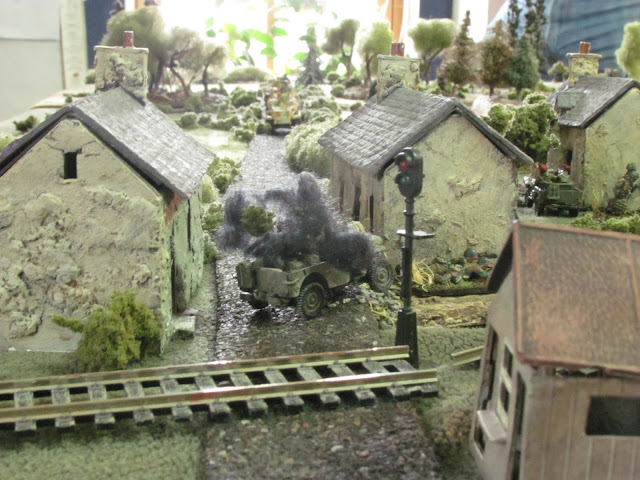 3. Another nest of Germans discovered the hard way

A second recon jeep is shot up by a hidden German HMG as they detour along the rail, with the jeep's surviving occupants diving into an adjacent orchard. German troops break from the cover of the woods to take up more forward positions in a nearby orchard. 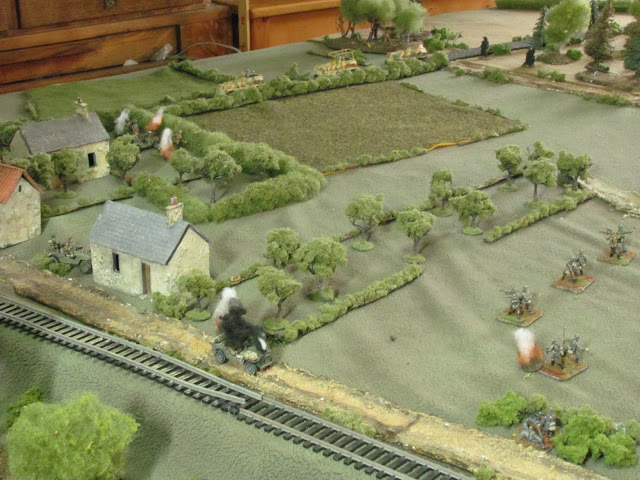 Reconnaisance elements are beaten back as R Co. moves forward north and south of the railway embankment. The disordered troops in full retreat warn the new arrivals of the menace lurking ahead. 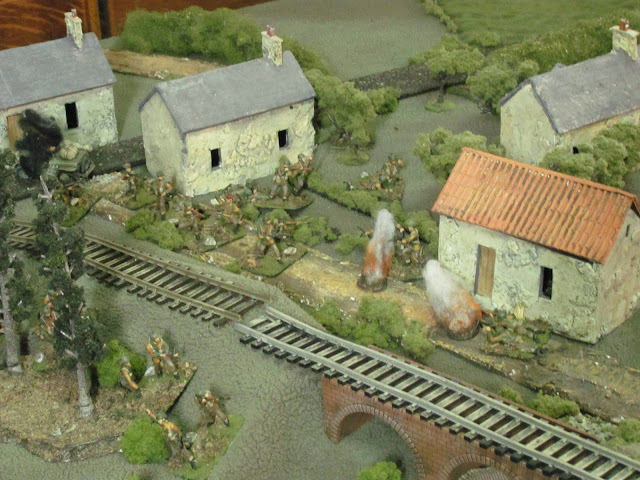 As the recon troop battles it out more elements of the 1st Parachute Battalion follow up, including the heavy weapons. The 6 lbr. on the left moves to emplace behind a high hedge and engage the German halftracks while PIATS move up north of the village to get a shot on another. 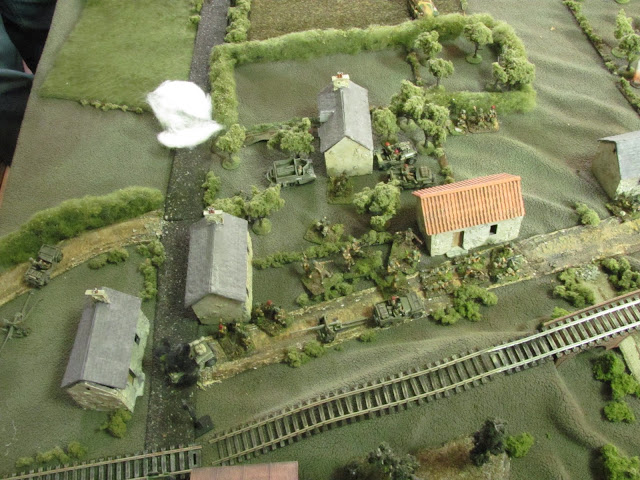 The first German reinforcements, elements of the SS Versogstruppen 9, arrive from the east, heading into the fray. Their commander leads the group with a platoon in transport that has been laid on courtesy of an incident card. 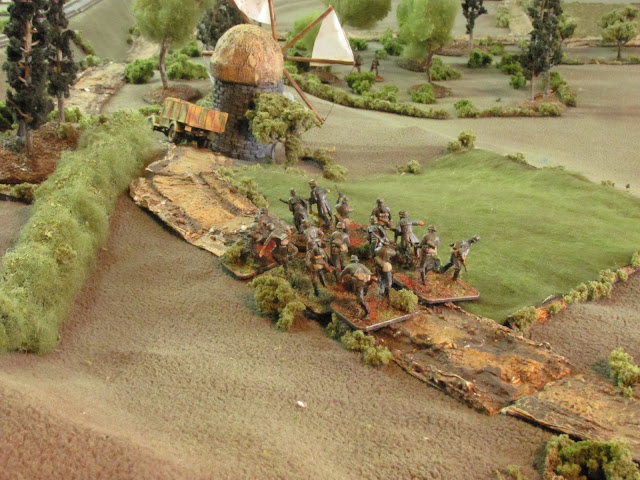 7.  Pushing forward on both sides of the tracks

While the Paras' R Co. tackles clearing the forest north of the railway, S Co., reinforced by a platoon of glider pilots that wander into the battle, winkles out German defenders to the south copse by copse. 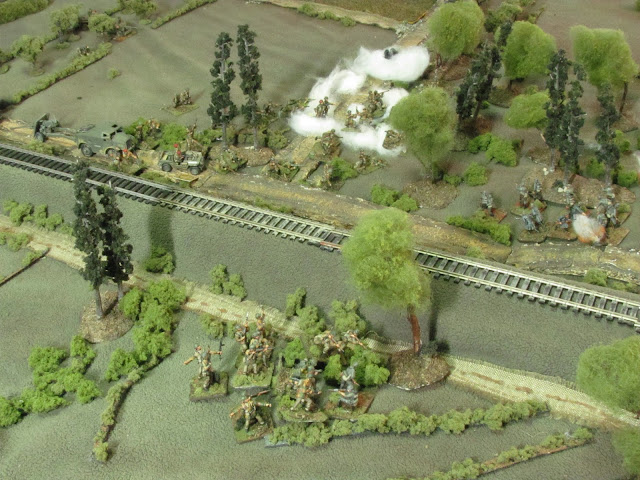 Venturing too close to the enemy, a German halftrack is knocked out by a barrage of PIAT fire. A second and third are picked off by the 6 lbrs. that have managed to emplace unnoticed, freeing the British from a major threat from this quarter. 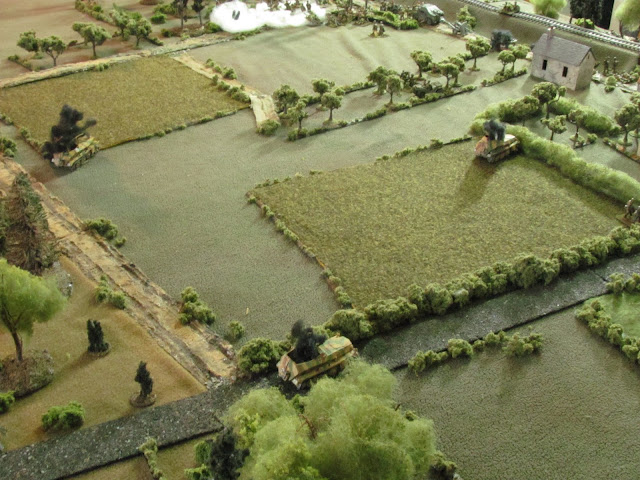 With the armoured threat to the northwest eliminated and the rest of the battalion making headway through the growing German resistance, one of the 6 lbr. troop limbers up and moves to a more forward location. 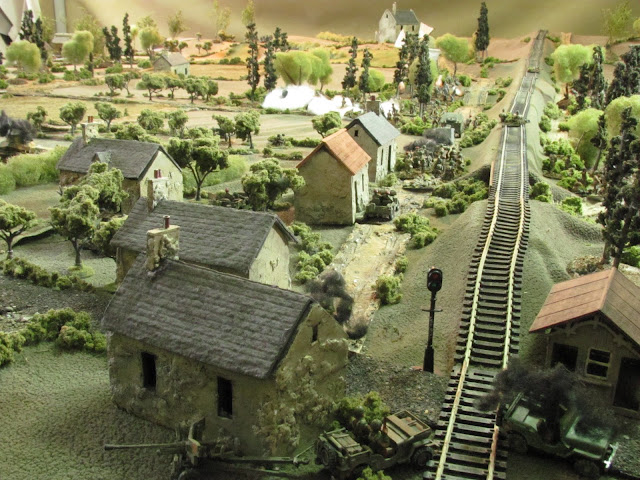 10. Pushing forward
Under cover of smoke R Co. pushes into the woods, while T Co. advances in the rear up the track bordering the north side of the railway. Some of the skittish German troops break and run. 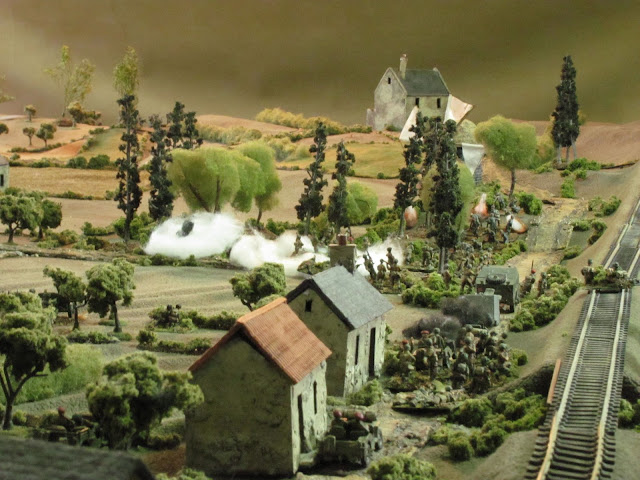 11. Paras encounter more German positions south of the railway
The reinforcing Germans takes up positions behind the first defending company on both sides of the railway. 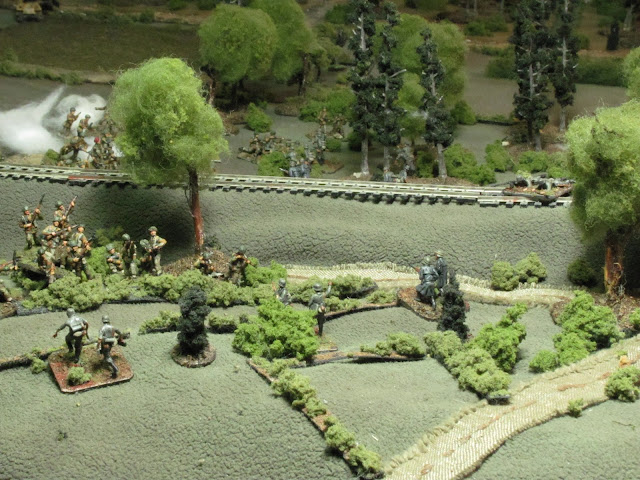 Using smoke and overwatch, R Co. systematically tackles the German defenders, who attempt to execute a fighting withdrawal through the woods. 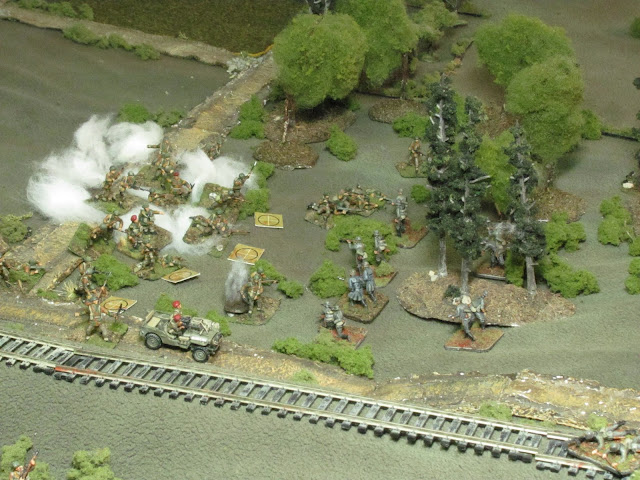 One of the British 6 lbrs. is brought forward to where the track exits the woods on the Arnhem side of the forest. It emplaces just in time to meet head on a third enemy company which has recently arrived on the scene. A lone recce bren gunner emplaced in the wind mill knocks out three of the German attacking stands before being taken out in turn. 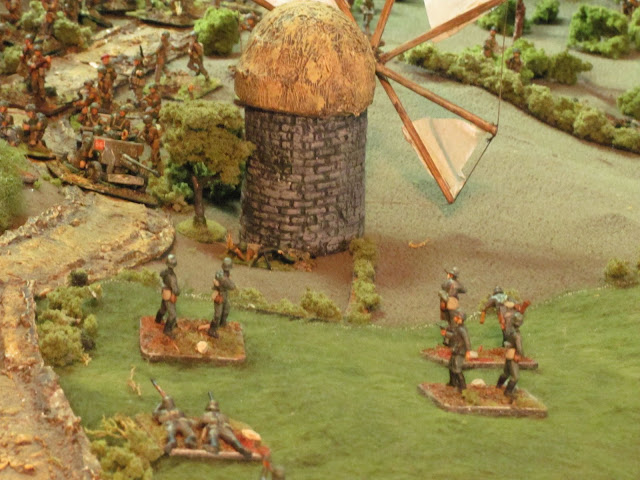 14. The big guns are brought into action

P Troop's 17 lbr. is emplaced in an orchard to cover against possible German armour arriving from the east as the paras prepare to make the push to the far side of the battlefield. 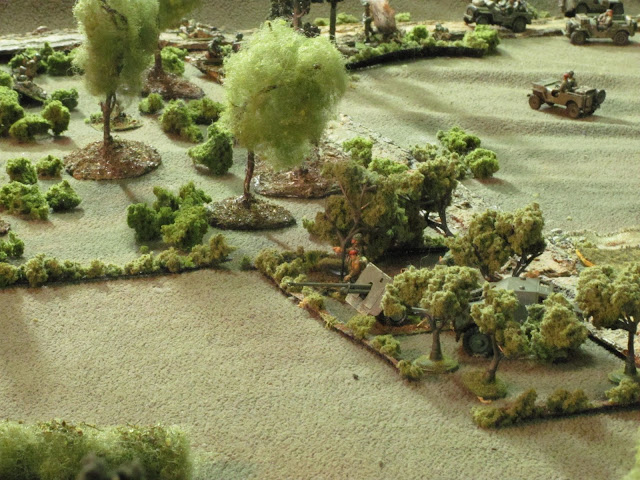 Meanwhile to the rear the British mortars, having just mounted up to move forward, have their transport brewed up by veteran troops of SS PzAufkl Abt 9 (minus their armoured halftracks, knocked out earlier) in a surprise attack on their rear echelon. One of the mortars is also destroyed bailing out and the second eliminated shortly afterwards, denying the British their battalion indirect fire support. 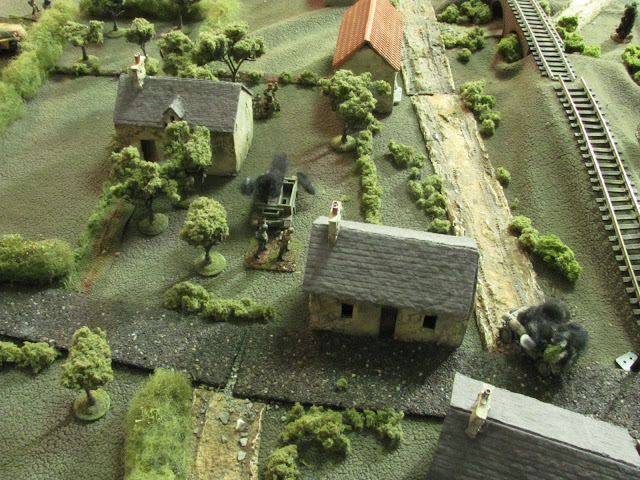 16. British commander orders his troops to press on up the railway. 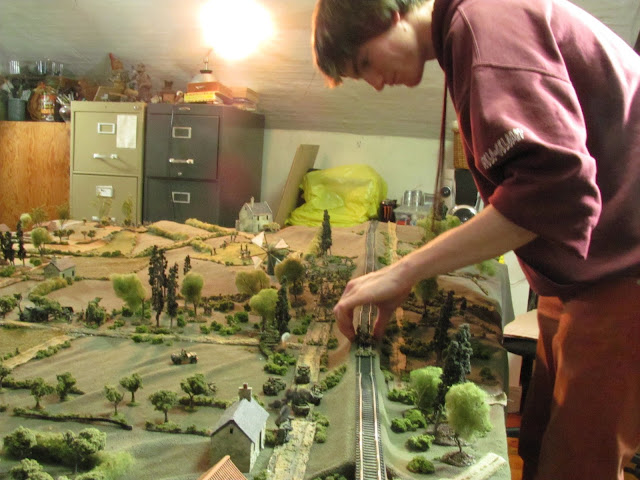 The newly arrived German reinforcements hastily set up positions along a bordering hedgerow while others try to push the paras back from the woods' edge. A few paras break through the German line and push on towards Arnhem.
The undefended 6 lbr. is quickly engaged and knocked out. South of the rail bed the few remaining defenders break and flee disordered back towards Arnhem, while a fourth veteran German infantry company can be seen entering from the east. 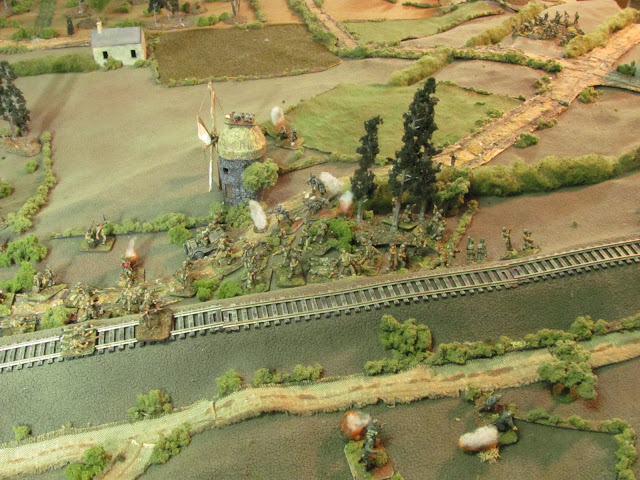 18. Hauptmann Dyment surveys his troops while grabbing a quick bite 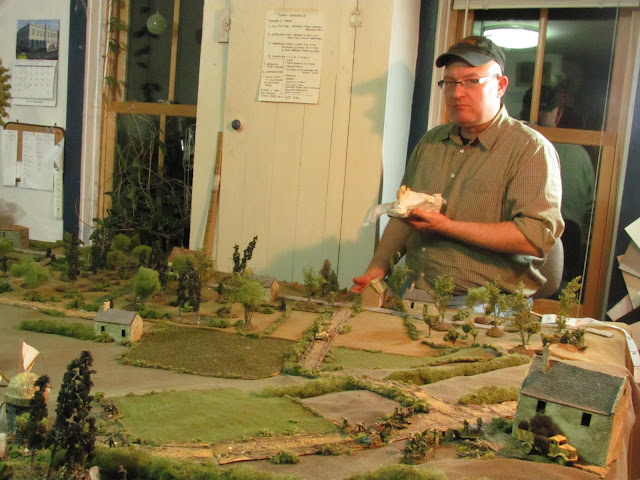 Veteran troops from SS Panzerjager 9, Kampgruppe Allworden arrive via the Amsterdamsweg and hurry to block the 1st Paras' S Co. as they push to exit the battlefield. Lead elements of a fifth German company, a towed 20mm flak, also arrive, but are reluctant to enter into the sites of the lurking 17 lbr. and stop at a distance to emplace their gun.

The Germans hastily take up positions behind a flanking hedgerow, but are spotted by the paras and immediately suffer casualties in a hail of defensive fire. Two of the three light machine guns are knocked out and the third suppressed. Meanwhile a chaotic fire fight continues at the edge of the woods as more paras break free for the last sprint. 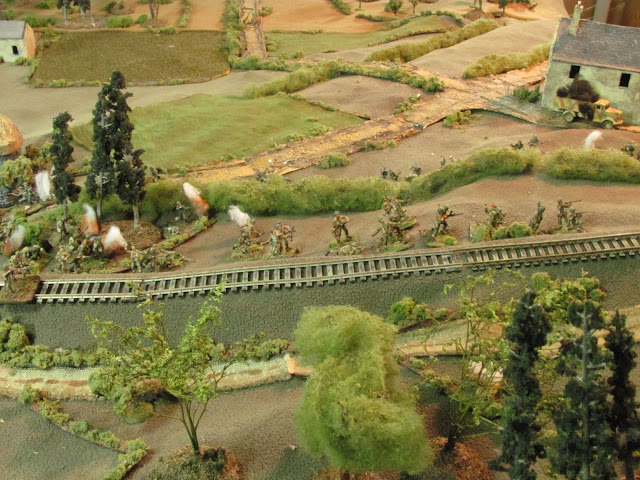 In the gathering dusk, and too little too late, a company of infantry from the 213 Signal Regiment arrive from the west via the Amsterdamsweg. Their 20mm flak, limbering up and attempting to move forward is spotted and comes under fire from the 17 lbr. and is quickly knocked out. Its supporting troops fail to get to where the action is before nightfall. 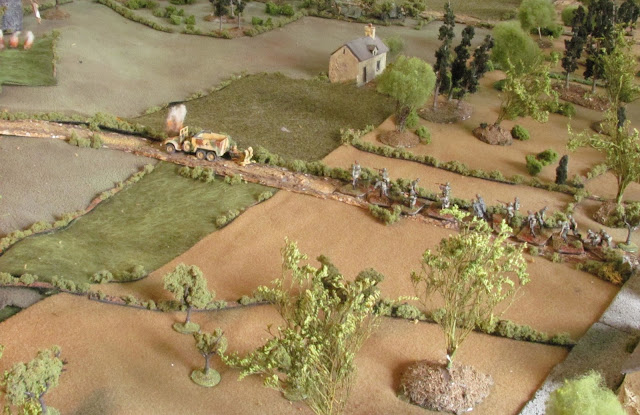 Escaping the enfilade fire the paras scramble over the railroad embankment and out of sight. In a last ditch effort to stop them the surviving Germans breach the hedge and scale the embankment, but are knocked out by enemy fire as they reach the top of the embankment.

At this point night falls and the battle ends. Although well on their way, not enough British paras exit to constitute a significant enough fighting force to get through to Arnhem, giving the Germans a marginal victory. However it was very close run thing, as the British were only one infantry stand away from gaining a major victory (because the company of paras that did exit, T Co., did so almost intact.) 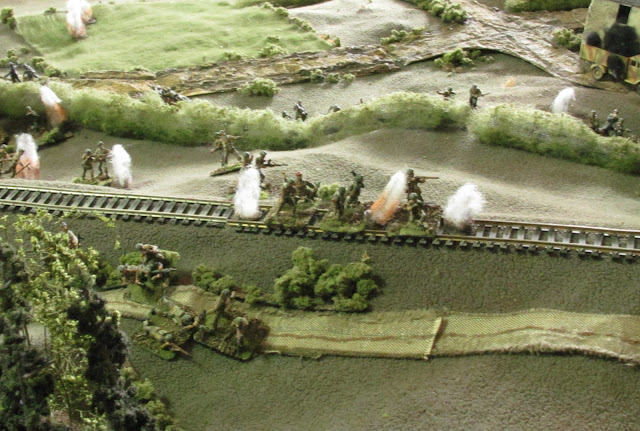