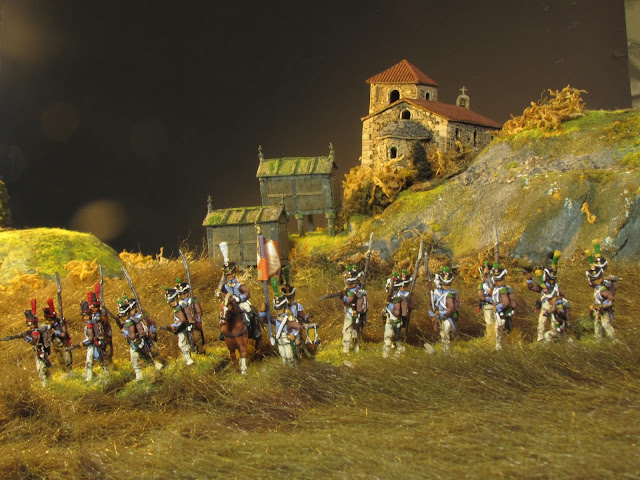 Unfortunately arriving too late for my Combat of the Coa, this unit is the latest in my ever-growing army of foreign troops that fought under the French flag in the Peninsula. They will join my Italians, Westphalians, Swiss, Nassau and Poles in my Peninsular battles.
These figures are Hat’s Légère, with a few head swaps and trimming of the plumes. They are probably a bit fancy for a Legion of mediocre troops, with more braid on the shakos than I would have liked, but the Legion du Midi, in their brown jackets, were kitted out as light infantry, although they mostly fought as line infantry.
I hope you enjoy the results.


A bit of history

First established as the Legion Piemontaise, the legion was a Franco-Italian unit raised from the French departments in northern Italy. It was one of many foreign raised legions that fought alongside the French throughout the Napoleonic Wars. Renamed the Legion du Midi in July 1804, only three battalions were raised, two of which were sent to the West Indies where most of the soldiers perished due to disease, the remainder being incorporated into the 82nd Line. The third battalion was renamed the first and sent to Spain with Junot’s third army, where it first fought alongside the Legion Hanoverienne. It continued to operate in Spain under various commanders, participating in the battles of Beja, Corogne, Busaco, and Fuentes-d’Onoro as well as smaller actions, such as that at Coa. A second battalion was raised but soon losses reduced the Legion once again to a single battalion.
The Legion du Midi did not have a stellar record, raised ostensibly as light infantry but fighting more as line throughout their time in Spain. They served in Spain until August 1811 when the battalion was disbanded with the remainder being incorporated into the 11e and 33e Légères.
Posted by Bill Slavin at 1:14 PM