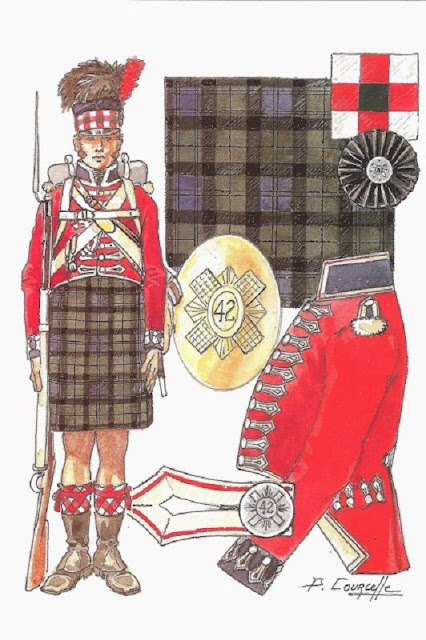 Another project I completed early this summer were these 42nd Highlanders (Black Watch) as the newest addition to my British Peninsular army. I hope to add more Highlander regiments in the future, but I enjoyed painting this first set of Italeri figures. I was a bit daunted by the dreaded kilt but was happy with the result.
For the most part the figures are straight out of the box, but a lack of command figures in this set had me getting my scalpel and modelling compound out. One of the ensigns is adapted from the drummer (with different legs, as the drummer in this kit is diminutive!) and with the second I got lazy, and decided the ensign has been replaced by one of the sergeants of the colour party, with a fairly easy conversion of a pike-bearing sergeant.
The officer was adapted from the officer in the uninspired Hat British Light Infantry set, receiving a bearskin, officer, sash and claymore, held in a more realistic manner.
All the sergeants received the proper sash, worn over the shoulder, and claymores were added to those in the colour party.
I think future Highlander Regiments may have to wait as the command conversions were fun but a bit time consuming and I have my eye on some of the very nice looking Strelets sets of Highlanders that are now available.

So a bit of history for this illustrious regiment...

After the Jacobite rising of 1715 Highland militias were raised from clans loyal to the British crown to keep control of Scotland. These six companies of Highlanders, with companies drawn from different clans (one company each coming from Clan Munro, Clan Fraser of Lovat, and Clan Grant and three from Clan Campbell) eventually became known as the Black Watch, probably as a result of how they dressed. Four more were added in 1739 at which time they were officially formed into the 43rd Highland Regiment of Foot.