We did a refight of the battle of Espinosa de los Monteros based on a scenario I wrote a couple of years ago (an earlier AAR can be found here). Spoiler alert, but the Spanish lost again, this time badly through no fault of my poor opponent who was unable to conjure anything over five on a 10-sided die while I regularly rolled tens. The Spanish, of course, did historically lose this battle but when you look at the ground it was a strong position and I still think, all things being equal, that the Spanish should be able to make a good go of it.
I was a bit slack on the photos, really only recording the mid-to-end game, but you should get the picture…

The battle was fought using Age of Eagles II rules and with 1/72 scale miniatures, almost entirely HaT with a smattering of Emhar, all from my own collection. The scenario can be found at this link. 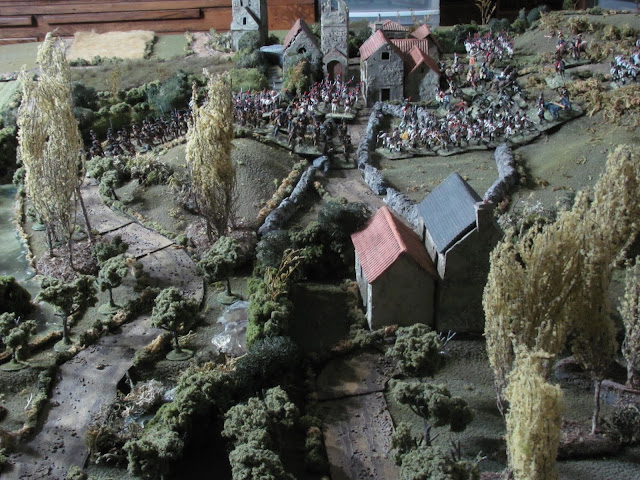 1. View from the French lines

Blake arrays his forces in front of Espinosa de los Monteros, placing his best troops in the centre and high ground (right of picture) while his irregular Andalusians under Acevedo hold a small hill bordered by the river on the Spanish right (left of picture). 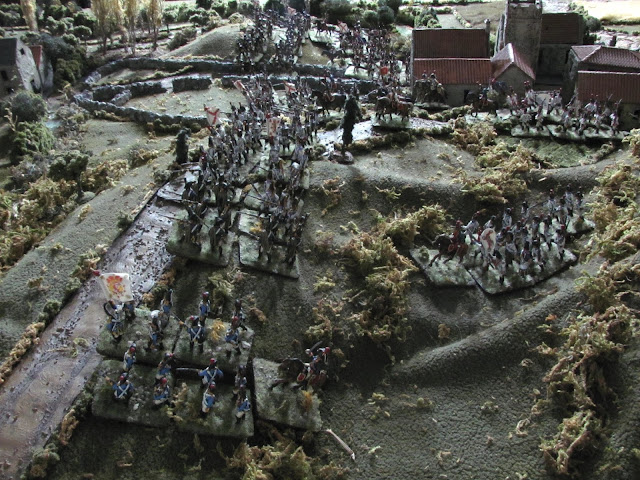 2. View from the high ground

Figuero’s Hiberians anchor the high ground on the Spanish left, with Romano’s division to their right and strong reserves behind. 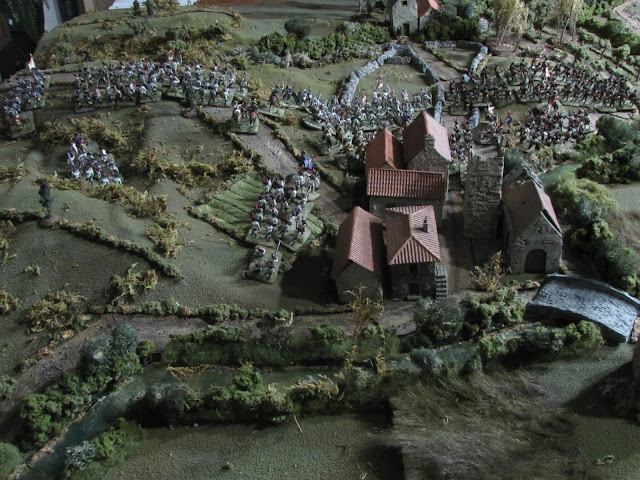 3. View from behind the Spanish lines

In the centre is Riquelme’s 3rd Division, holding an area of difficult terrain crisscrossed with stone walls while Martinengo supports both him and the Asturian militia on the right. 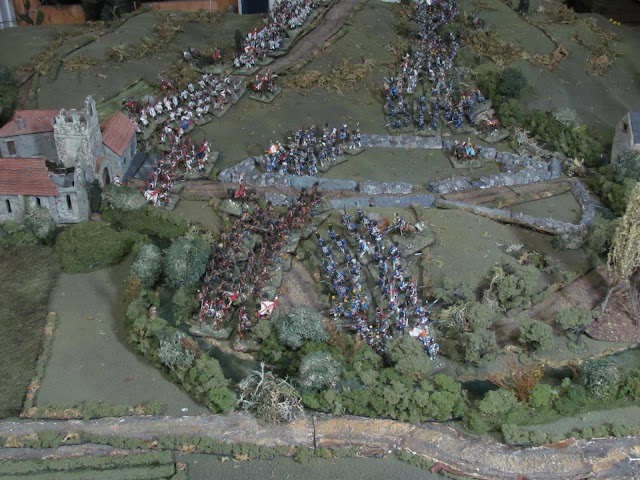 As mentioned, the camera was forgotten for a good portion of the game. So…

The French attack was based on a demonstration with Lapisse’s division to tie up the Spanish Marshal Blake’s forces on the high ground on the French right while Vilatte and Ruffin attacked french left and centre (foreground).
The Spanish moved forward to try and deny the French the advantage of the stone-walled terrain in the centre, but by the time this photo was taken had been driven back by Vilatte so that the French now control that area.
Ruffin (foreground) has advanced through the woods and is arrayed in front of the Asturians preparing to drive them from a low hill on this flank while Martinenego’s 2nd Division has been driven back into Espinosa by Vilatte, badly battered. 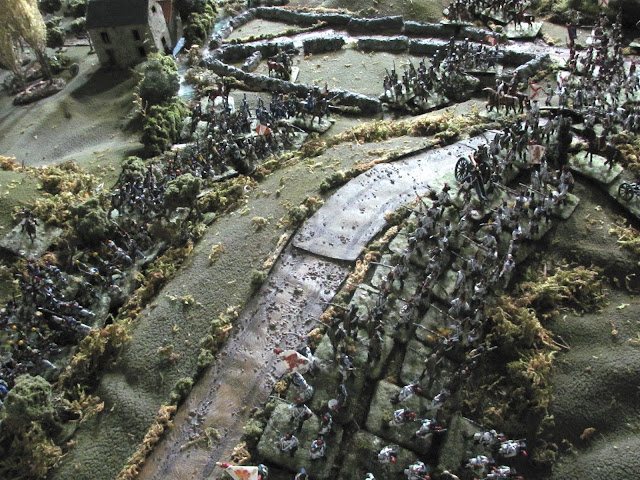 5. Stand off on Spanish left

Meanwhile, after advancing rapidly, Perrin is happy to have Lapisse hold a position in the wooded valley below the Spanish left, pinning as many of the enemy as possible here on the high ground. Blake feeds some of his reserve into this line to strenghten it. 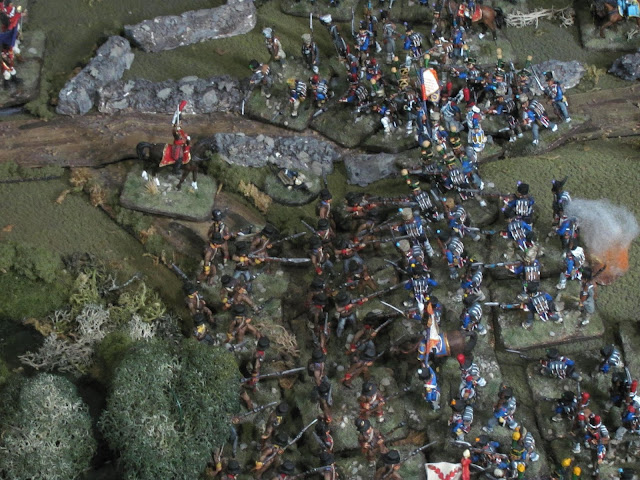 After a brief setback in which the small Spanish cavalry brigade attacks before being driven off, routed, Ruffin decisively pushes the Spanish back. 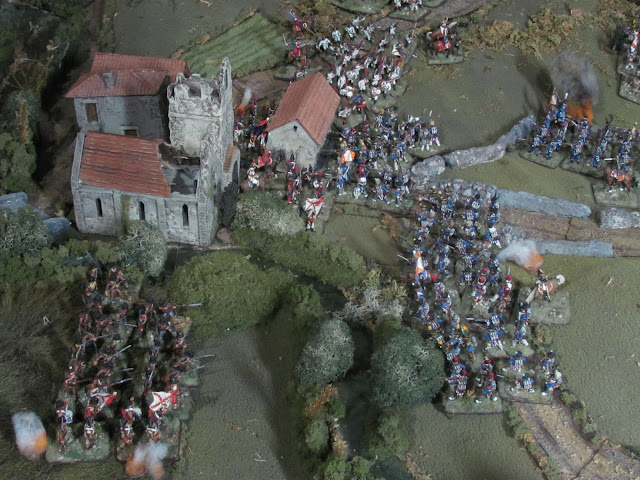 The Asturian militia is driven back over the Rio Trubera and slowly melt off into the hills, surrendering to French control the Spanish right. 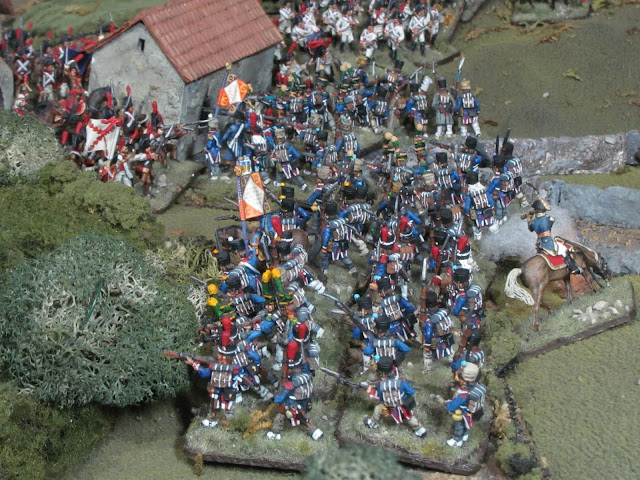 Ruffin and one of Vilatte’s brigades now focus their attention on driving the remnants of Martinenego’s
battered division out of Espinosa. 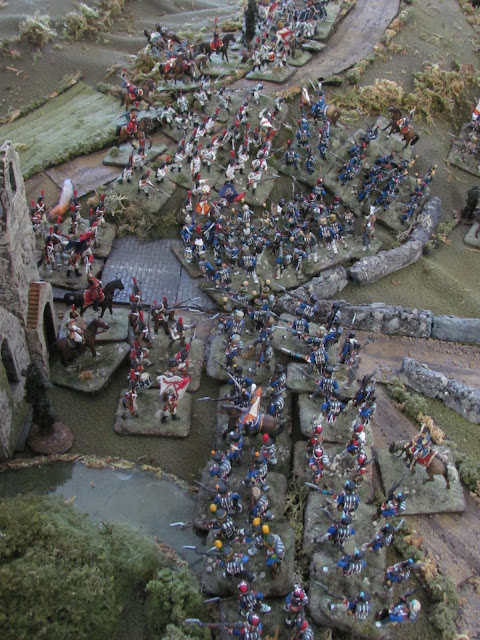 With Martinenego driven out of Espinosa the Spanish right is enveloped by Ruffin’s brigade. 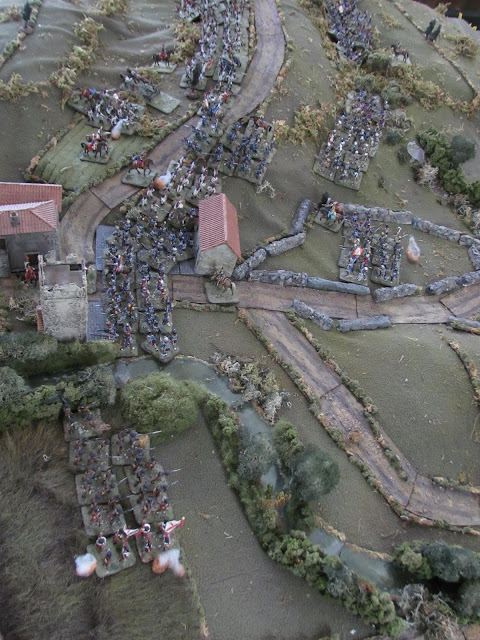 This overview shows from bottom to top:
The Asturian militia retreating form the field, while above them Ruffin occupies Espinosa. The Spanish have proven surprisingly sticky, Mahy’s brigade driving back one of Vilatte’s deep into the stone-walled area although the second (Vilatte’s élite light infantry, with the general in personal command) successfully and somewhat unwisely has driven deep into the Spanish lines.
At the top the cream of Blake’s army still holds the high ground untouched while Marshal Perrin is happy to have General Lapisse hold his position in front of them while he works to roll up the Spanish right. 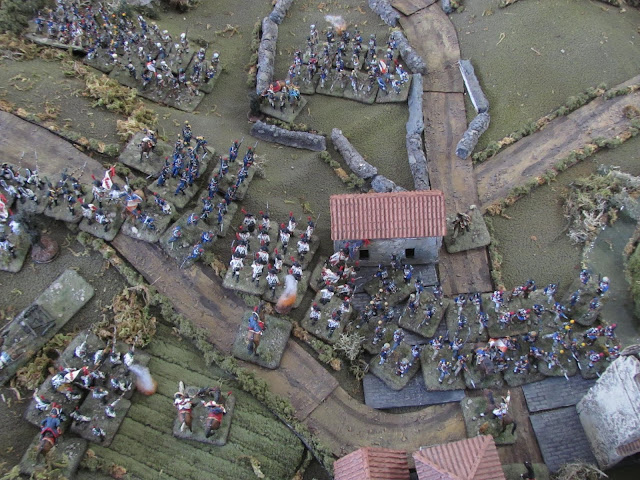 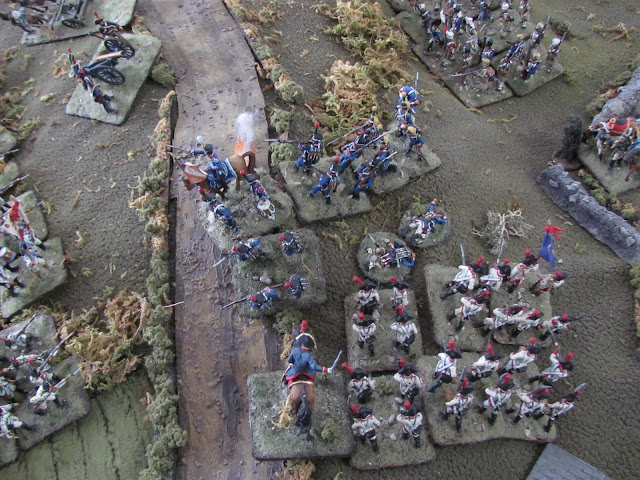 After driving off one French brigade, Spanish marshal Mahy, in direct command, wheels and drives into the flank of Pacthod’s light infantry. This French brigade has been unlucky from the beginning, driven off early and then suffering under Spanish cannon fire before this point. Musketry and cannon fire reduce them further and they are sent reeling back by the Spanish, spent, and Vilatte is captured - the Spanish’s first and only real success of the day! 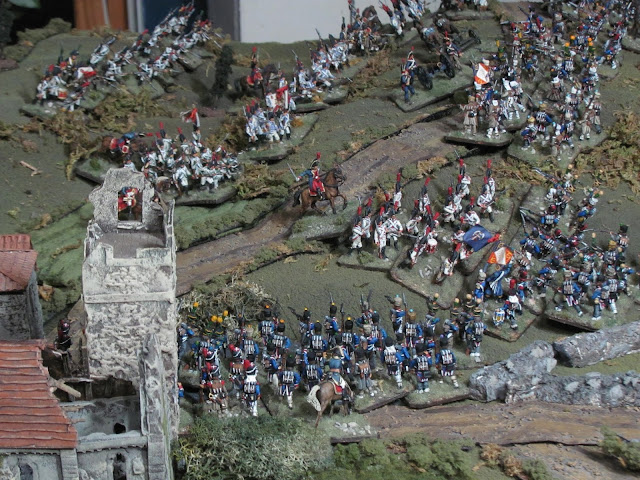 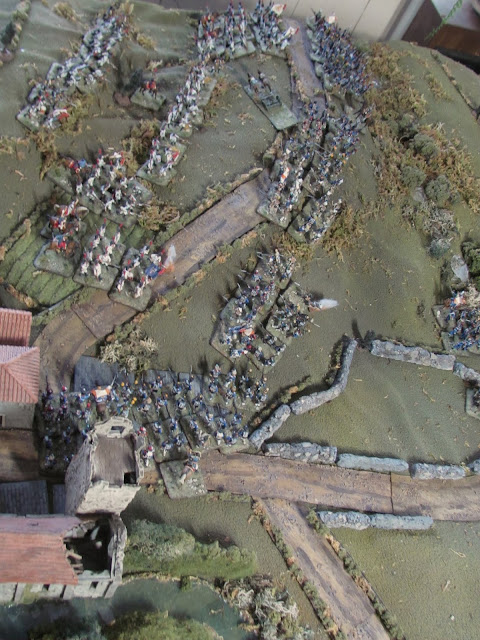 French advance solidly in line while Pacthod's battered brigade can be seen in retreat far right. 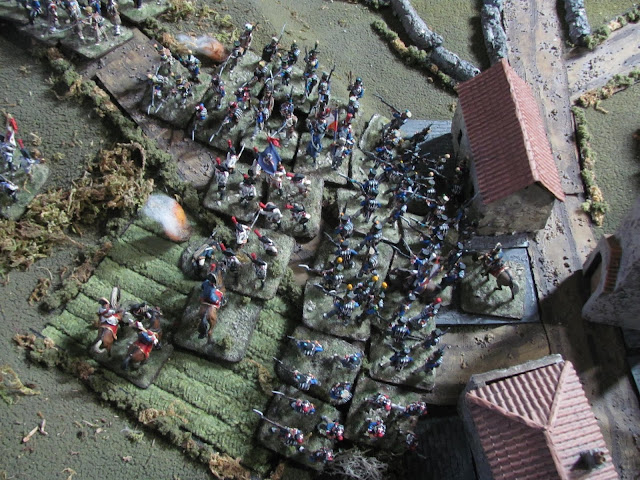 15. Between a rock and a hard place

Mahy’s brigade, Heroes of Espinosa, alone on what remains of the Spanish right are assaulted from front and flank and rout entirely from the battlefield. 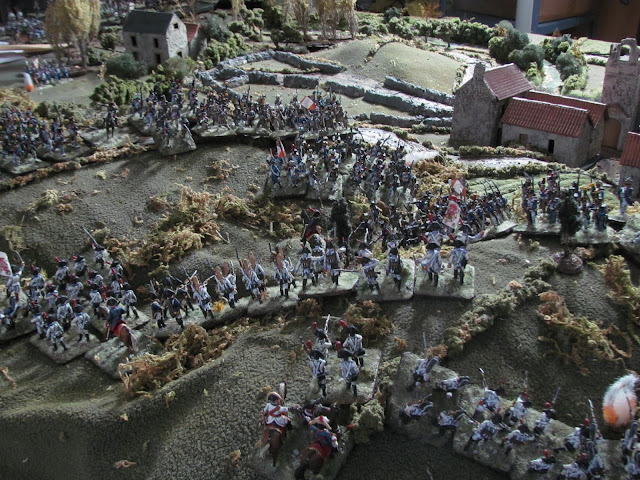 With now superior French forces encroaching on all fronts the remnants of Blake’s army retreat into the mountains, leaving the field to a decisive French victory.