I decided to add the 95th Rifles as my next addition to my growing British Peninsular War army. The British 95th Rifles don't need much introduction as they are a well known unit and much loved by wargamers. Up until now I hadn't really required them as the rule set I play is a brigade level game and the Rifles were generally parcelled out amongst the various brigades as extra skirmish troops, a company or two at a time. But I am moving towards gaming at a battalion level, especially for some of the smaller-sized Peninsular engagements and needed these in the mix as they fought throughout the Peninsular War in wellington's army.
My original intention was to base some on individual stands to act as skirmishers when required and others in group stands when I needed them in a more formal arrangement (march columns and line formations - rare for the Rifles but I believe they did fight in line on occasion). But I soon realized that this seemed an inordinate amount of figure painting as I needed to have duplicates for each unit, especially as I would need some skirmish units for all of my regiments in the future.
So I came up with the following basing scheme, probably not original to me but one that I think works very well. It allows for paired skirmish stands (which will work) and uses flexible magnet sheets purchased at a dollar store.
The only trick was pairing the magnets before I cut the top and bottom bases, as different magnets would sometimes offset the paired bases slightly through repulsion. As a result, I needed to number the base and its corresponding figures - not a big deal. I was happy with the result and am now in the process of converting the light company stands in all my existing regiments to this basing.
I thought other gamers might appreciate the idea. 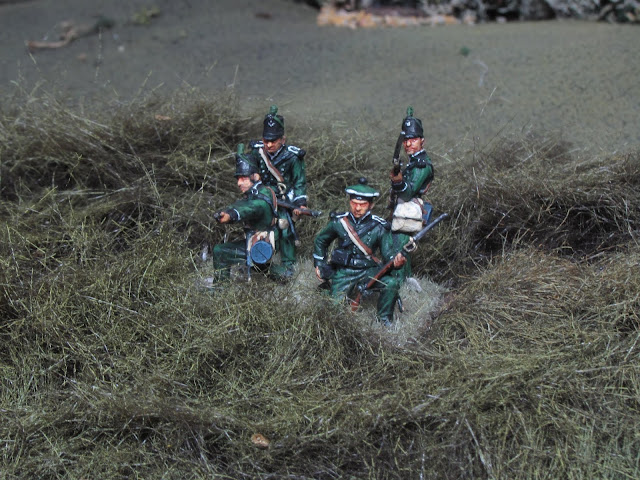