I was reading Oman's book on Wellington's army the other day, and he was going on at length about the ox carts hired by the British to move their supplies through Portugal and Spain. I have always loved these rustic vehicles - until recently they were still in use in the Azores (a place I visit often as it is where my partner is from). I remember distinctly the day I was sketching an ox cart in the small village of Sete Cidades when the woman of the house saw us, and, aghast that it had been left carelessly in the front yard, had her no-good son go out and put it way in the shed!

I was telling a friend with an interest in wood-working (as well as Napoleonic history) about these carts and their solid wooden wheels, and he was a bit incredulous that iron age wheel technology was still being used in Napoleonic times, never mind today. I'm not sure why spoked wheels weren't traditionally used on these carts and can only think that, outside of the possible absence of wheel wrights, durability trumped lightness and speed on the rough paths that passed as roads in so much of the Iberian Peninsula.
On my most recent trip to the Azores I spotted one of these carts in the town square of Maia and photographed it. Mostly these carts are no longer in use, only coming out dolled up with decorations and brightly painted for festas and special events. But it was this cart that served as my guide for this model.

Although typically they are now painted, I wasn't certain what the situation was in the early 1800's. I found a few contemporary paintings that seemed to show them unpainted or with only the wheels painted, and decided to go with the latter. (Searches for ox carts came up with litttle but a search using the Portuguese carroça de boi came up with lots, including this excellent article. )

During the Peninsula War the British army didn't have its own transport arm but rather depended upon local resources. This often meant employing the services of the Portuguese ox carts and their drivers, which were in abundance and well-suited to negotiate the Iberian landscape. Oman writes at length about this in his book, but this one description stuck with me and is probably worth repeating here:

Such stores as did move upon wheels, and not upon mule-back, were carried on Portuguese ox-waggons, to which Wellington was compelled to have recourse for want of better vehicles. These were very primitive structures—the sides of wicker work, the wheels made of solid circles of wood bounded with iron, turning axle and all, which made their grinding noise almost intolerable. The excruciating thrills caused to the ear by a train of such carts are mentioned with disgust by nearly every Peninsular diarist, on his first introduction to life at the front. The only advantages of ox-waggons were that they were light, easy to repair, and specially built for the bad roads of the country: moreover, every peasant knew how to drive them, or to mend them at a pinch. Their weak points were that they were intolerably slow—two miles an hour was a full allowance—and that they were too small to carry much. However, they had to serve for want of better vehicles—and the army could not have lived without their service. An immense amount of them were employed, some on regular and long terms of hire, as part of the permanent transport of the army, others in a more temporary way, by requisition from the district. These last were always difficult to manage; professional muleteers would not object to travel, but impressed peasants loathed quitting their own district, fearing that they might be taken far afield—perhaps into Spain—before they were released. They were always trying to abscond with their precious bullocks, abandoning the comparatively worthless cart and its stores. A picture of the sort may be taken from Hennegan’s lively narrative of a march in 1809, when he had to take an unwilling train of “embargoed” waggoners across the mountains of Northern Beira.


“Leaning on their oxen at nightfall, they contemplated in mute dismay on one side the gigantic hill which they had just descended, on the other the roaring torrent of the Douro, which in its impetuous course seemed to threaten with destruction the temerity that would brave its power. The Santa Marias of some were answered by the more emphatic carajos! of others, but even these died away before the necessities of the moment, and unyoking the oxen, to afford them the shelter of trees, the drivers spread their large cloaks in the empty sheds, and soon in sleep seemed to forget their disappointment. The poor men, taken from their homes for our service, risked in the loss of their oxen the only means of support for themselves and families.
“The following morning, however, presented a curious scene. There stood the wains, securely packed, but looking as if the earth had brought them forth, for no vestige remained of the means by which they had been brought to this lonely spot. The rumour of the proximity of the French had determined these Portuguese on sacrificing the wains, if only they could ensure the preservation of themselves and oxen. What was now to be done?”

As a matter of fact, the non-plussed guardian of the deserted convoy had to remain motionless for many days, risking the possible arrival of the French, till at last he procured boats on the Douro, and shipped his charge down to Oporto. Hennegan’s peasants got away with their bullocks—he and his escort were evidently sleepy and unsuspecting: but often a good watch was kept on the teams, and sentries placed over them. In such cases, if the weather was bad, or the French too near, the drivers would often sacrifice even their loved beasts, and simply abscond themselves, abandoning their means of livelihood.
From Wellington's Army, by Charles Oman

If you are interested in more information on the logistics faced by Wellington in supplying his army, here are a couple of excellent online references:

The Duke of Wellington and the Supply System during the Peninsula War, by Troy T. Kirby

The build was surprisingly easy to do, done over a few sessions. Here is a step by step.

And here are a few more photos of the finished models: 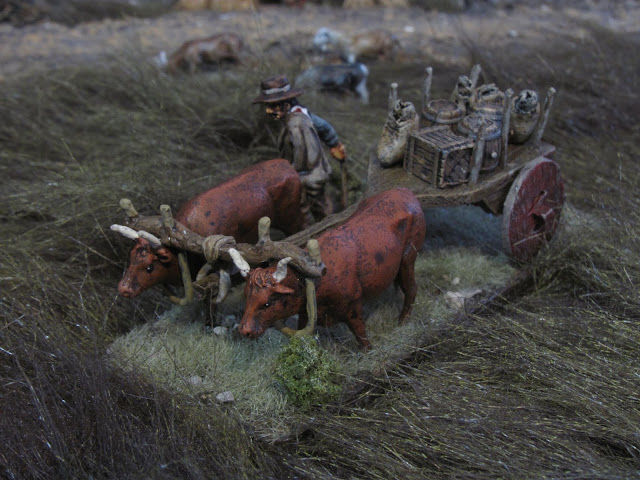 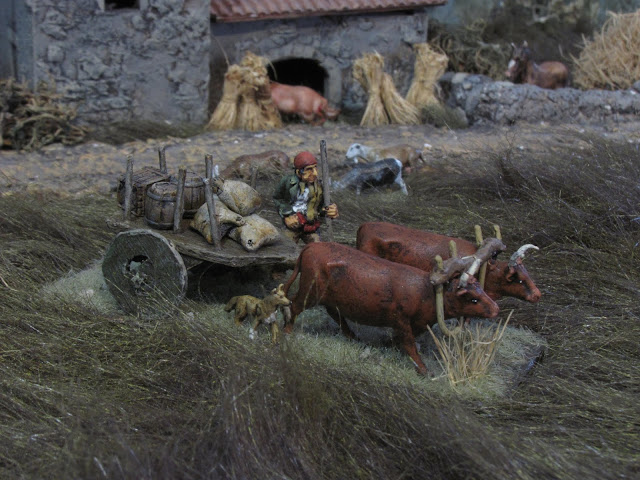 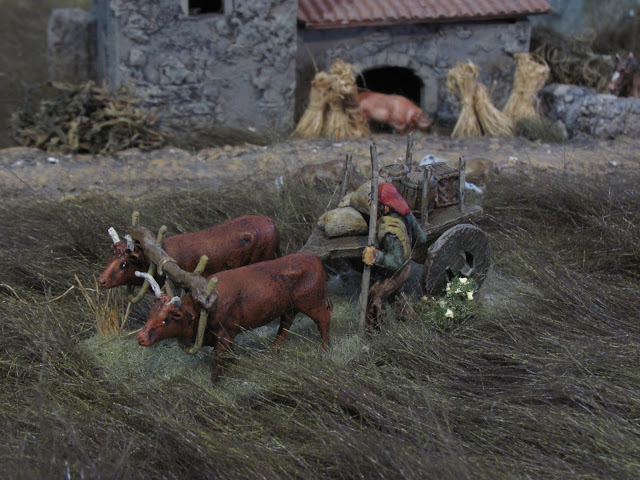