This weekend our group played out our annual Big Game (Biggish Game, really - numbers and scope have shrunk to more do-able proportions over the years!) a two day affair that allows us to seriously get our teeth into a scenario of choice. This year’s scenario was Near Smolensk, written by Michael Turner for the Battlefront WWII rule set. The scenario is set during the battle of Smolensk in Russian, July, 1941, and is a non-historical encounter that has the Russians holding a vital river crossing against attacking German armour and infantry.

It pits a German infantry battalion with support weapons, a light tank company, and the support of an SP panzerjager platoon against two companies of Russians, support weapons, an AA platoon, and a tank battalion (roughly equivalent to the German tank company). Reinforcements in the form of a company of engineers and an assault gun platoon arrive for the Germans on Turn 6 and a company of engineers and the third company of infantry for the Russian infantry battalion make their appearance Turn 8. Victory conditions were based on what objectives were held at the end of the game; 4 points for each village and ford, 6 points for the main bridge in the northeast corner. The location and number of fords were unknown to the attacking Germans but were to the Russians. (As it turned out, there were two).

The game was played out on a 7’X9’ table and played with 1/72 scale toys, mostly plastic with a bit of lead. The fantastic array of early war armour was courtesy of Phong Nugyen-Ho’s talents, most of the scenery and table building courtesy of me and the whole thing played out in the palatial dining room of Ted Hodson, who also sustained us with delicious chili, burritos and falafels!

The Russian commander decided from the beginning to abandon the village in the southwest to the Germans, opting instead to concentrate the defence in a line running along the river and encompassing the northwest village and woods just south of it, as well as the two fords located where the question mark is on the map. Minefields were placed to bolster the defence on the centre left with a smaller field on the Russian right. The small woods south of the village, seen as key to the defence was defended in depth. AA guns were set up in close defence of the bridgehead.
The position was a strong one, with well-covered routes along the river that allowed easy shifting of defending forces as the situation might require. In the end it was mostly just armour that was shifted as the bulk of the German attack fell on the most strongly held part of the line.

The German attack keyed up along the woods to the west (left), with 1st Kp. attacking north of the road towards the Russian held village, the 2nd Kp. on the south side of the road and the third tackling the small woods. As the battle played out the 2nd Kp. ended up splitting its attack between the village and in support of 3 Kp. on the woods.
German armour massed on the extreme left (north) wing of the attack. 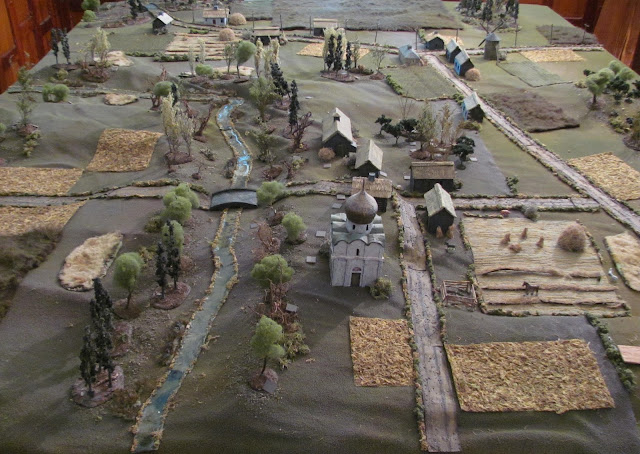 The battlefield viewed form the north. Chits represent Russia positions (some are dummies). The Germans attacked from the woods to the right of the photo, the Russian line followed the river, bulging out to accommodate the closest village and the woods beyond. 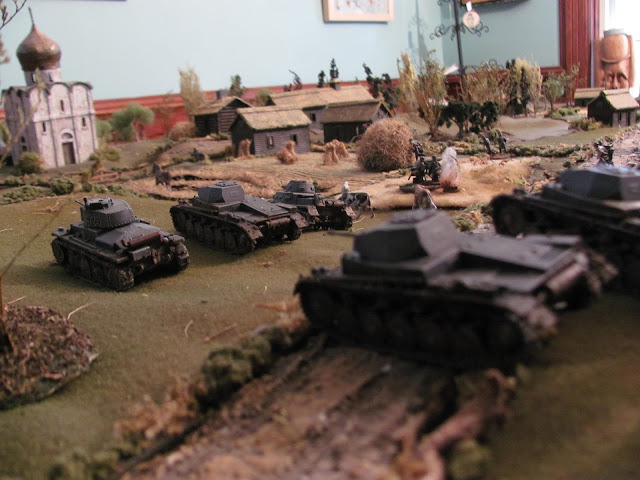 The veteran German Light Panzer Kp. spills out from around the north edge of the woods in advance against the Russian position. The Kompanie is composed of PzKpfw IIc’s, PzKpfw Ib’s and PzKpfw 38t’s. 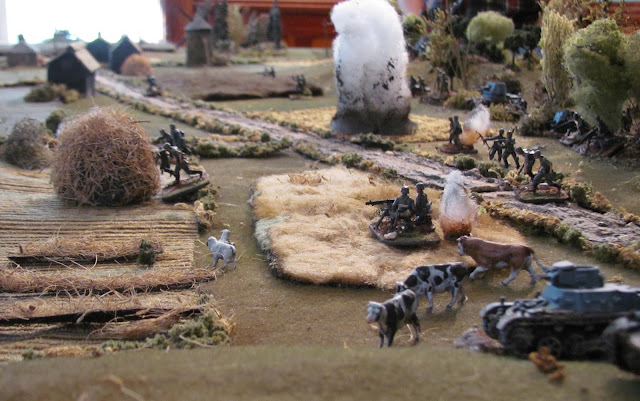 The advancing infantry start to come under fire from Russian mortars and heavy machine guns emplaced in the village. 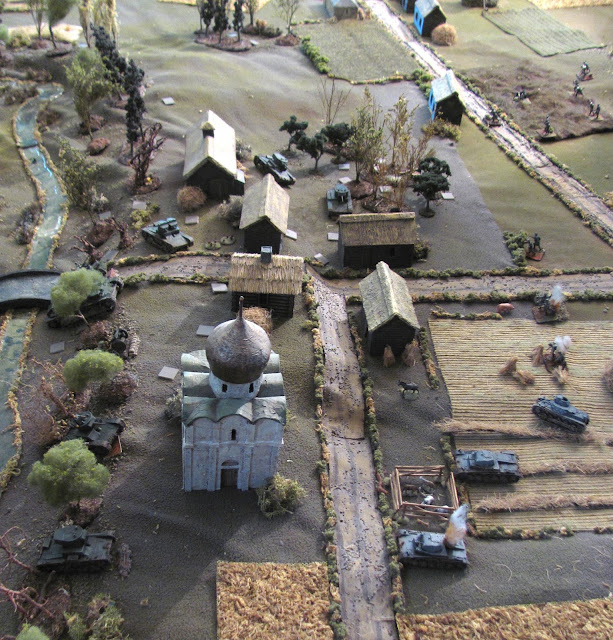 As the German armour draws closer Russian tanks open fire, exposing their positions scattered through the village and north along the river. Infantry guns and interlocking HMG fire also join in, trying to blunt the German advance. 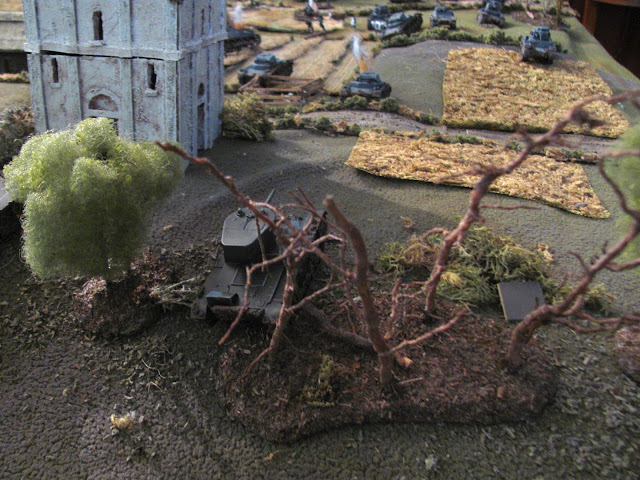 4. Fire from the river edge

The small Russian tanks are well hidden hull down in the dense woods along the river. A T26/33 opens up in ambush on the German armour. 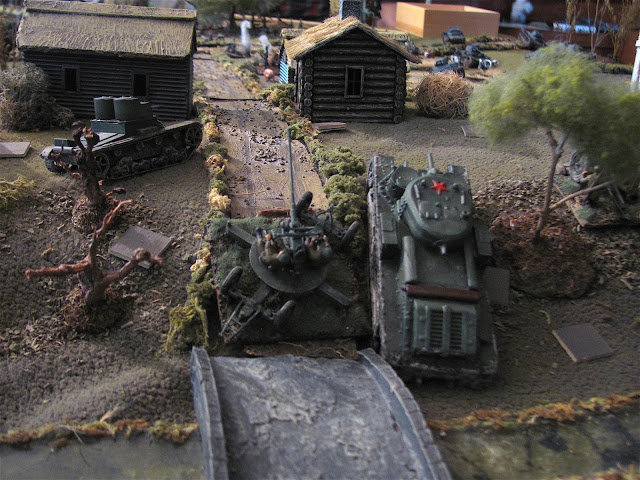 The Russian commander shifts some of his heavy armour from further south into the village as the focus of the German attack is revealed. The first T28 C emerges from the woods next to the bridge as the Russian AA opens up on enemy infantry moving down the road. 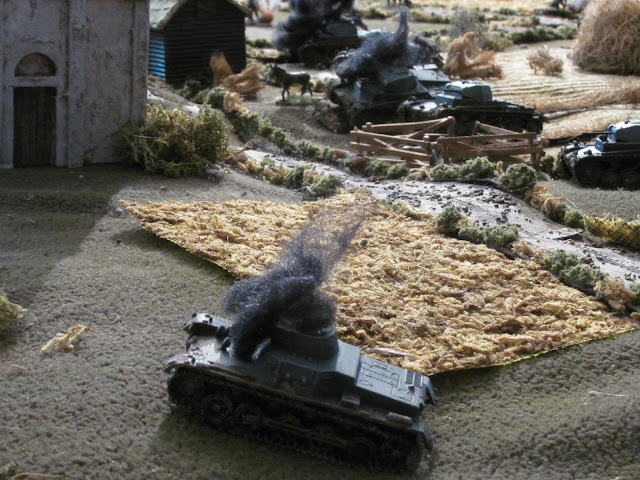 Two of the lighter German tanks are picked off easily by the Russians as they begin to close. 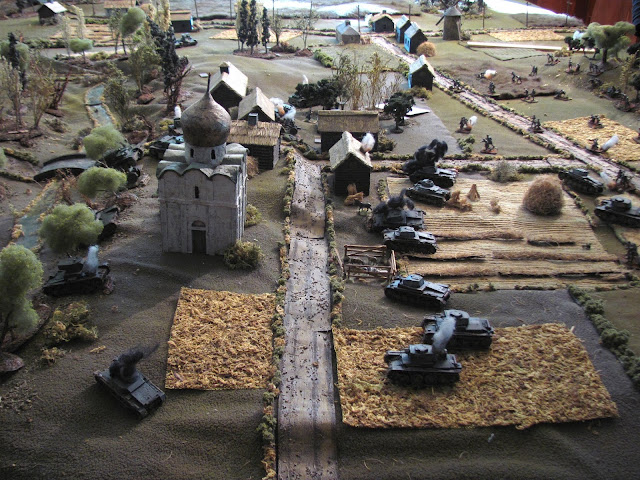 The German plan of attack is early revealed as the bulk of its armour sweeps in on the Russians’ right flank (bottom). There are enough enemy tanks to blunt this move until more armour reinforcements can be moved over from the fords (top left) to help defend the bridgehead (centre left).
On the centre right the first German infantry attack is turned back by small arms fire from the perimeter of the village while in the upper right 3 Kp. moves in from further afield to assault the small woods south of the village (centre). 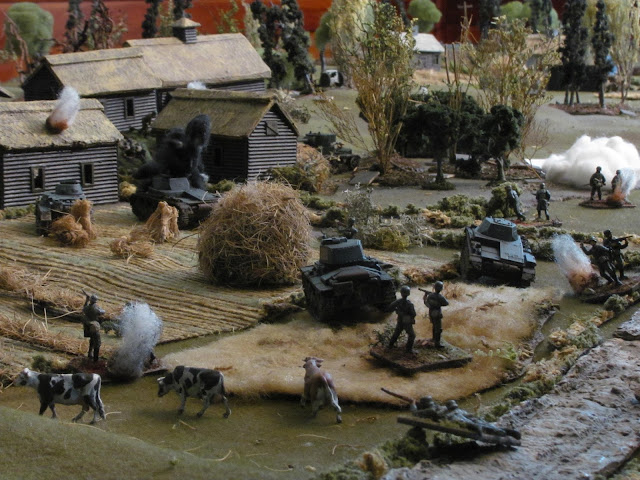 The defence of the perimeter of the village proves sticky going for the German infantry, so their tanks move in to help clear the Russians out of some of the buildings. 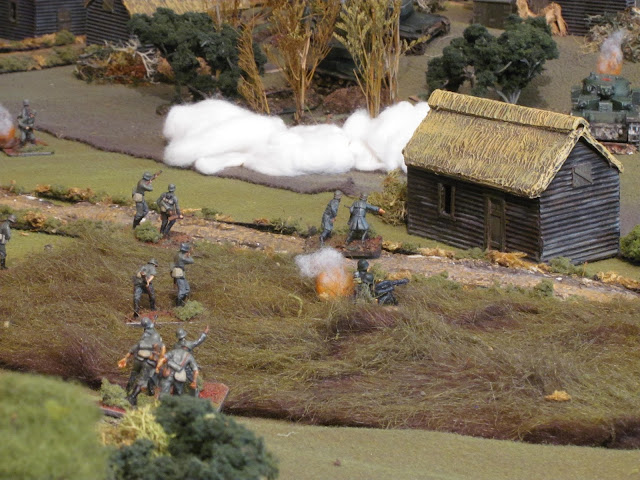 Under cover of a barrage of mortar smoke 3 Kp. moves in to assault the woods south of the village. 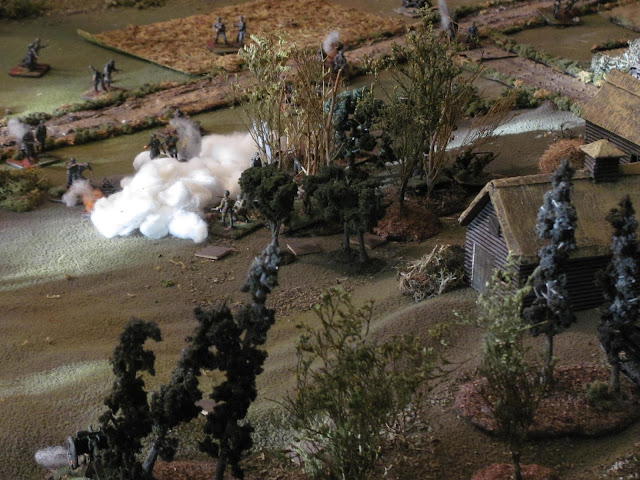 As mentioned, a key to the Russian line was a defence of the small woods south of the village in depth. The Germans fairly easily brushed off the outer defence but them came up against a second line deep in the woods. Both sides continually fed men int to this fray, and in the end the battle ended up chewing up half a Russian company as well as the loss of a tank. But it was more costly for the Germans, who in the end expended a company and a half of infantry trying to take this woods without success. 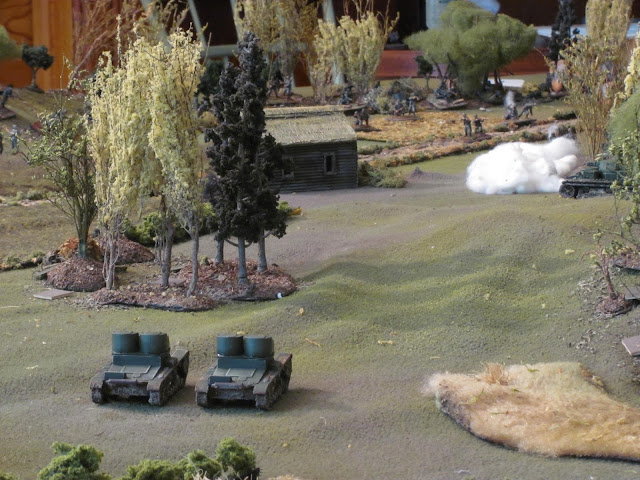 On the extreme left end of the Russian lines two more T26.31’s sally out from the woods near the ford to lend their support. But the Germans move part of their Panzerjager platoon of PzJg Ib’s to hold them at bay. 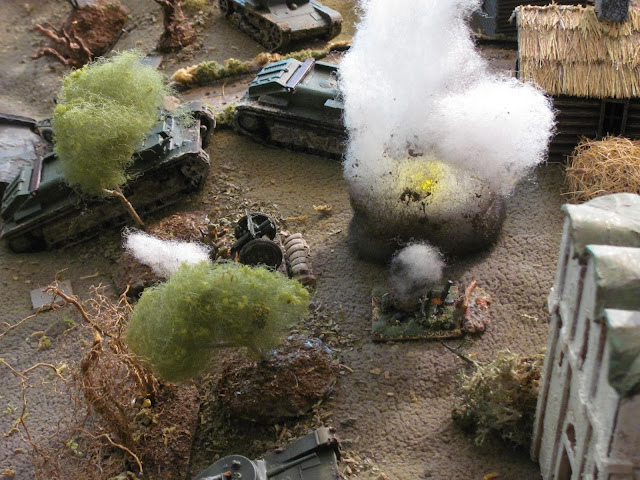 While the Russian mortars stay largely ineffective, the German mortars do a good job of keeping the enemy’s heads down. Firing a series of concentrations, this one brasses up the Russian infantry gun and one of their company mortars along the river edge. 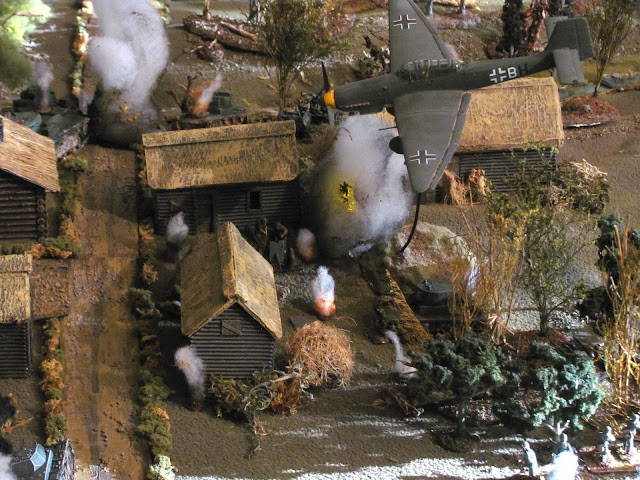 The Germans throw one of their two Stuka strikes against the village, trying to break the impasse. But Russian AA fire blunts the attack and damage was minimal. 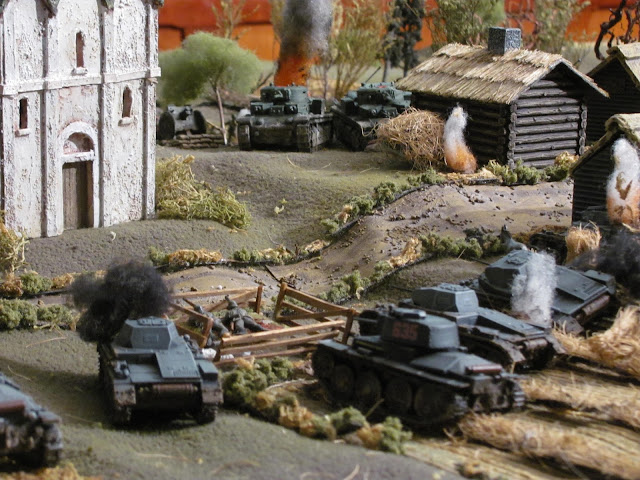 The armour on both sides settle into a bit of a standoff, with the Russians, in strong positions between the village and the bridge hold back the Germans who are reluctant to move into close range of the Russian tanks. 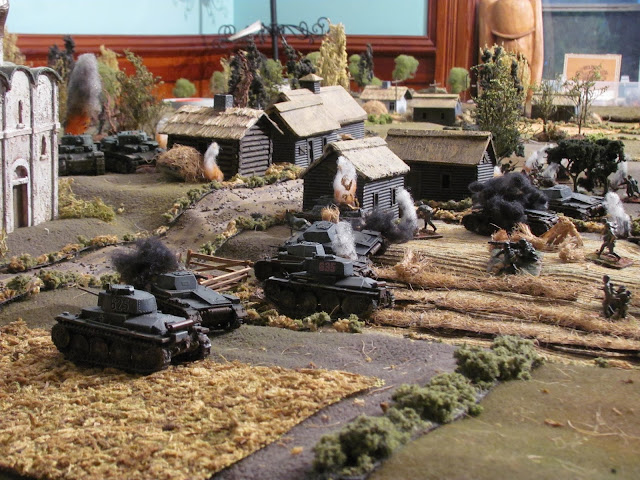 With the outer houses cleared by their armour German Kps. 1 and 2 resume their assault on the town, forcing their way into the western most houses. A fine shot from one of the 38t’s KO’s one of the two T28’s at the bridge as it attempts to maneuver into a better firing position. This is traded off against the loss of a third of the light German tanks. 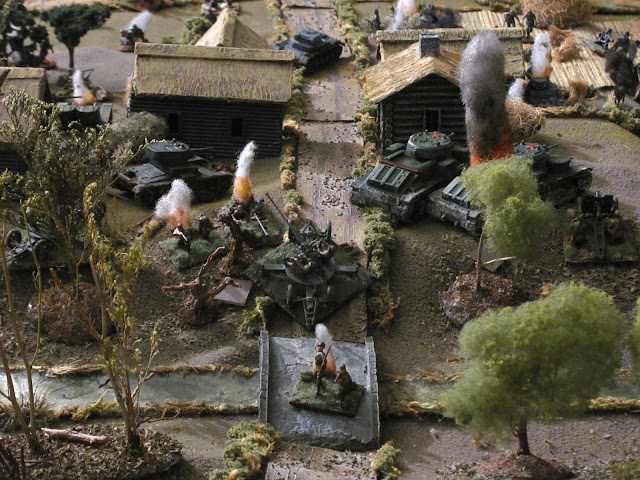 A the end of Day 1 with four Russian tanks knocked out, including one of the dreaded T28’s and the Russian command tank, things look bleak for the defenders. Much of the Russian infantry company holding the village break and flee for the bridge as the Germans start to make headway into the village. 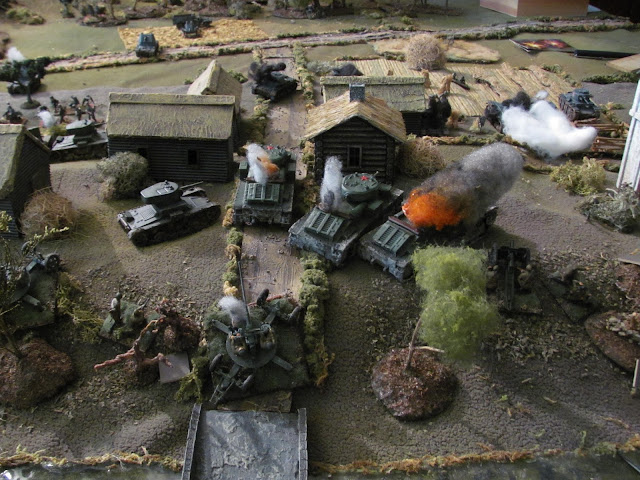 What a difference a night’s sleep makes! The Russians return the next day, moving the third of their T28’s from further down the river into the village. Two enemy tanks are brewed up in quick succession bringing German light armour losses to over 50%. In the small woods, too, the Russian infantry beat off yet another German attack to take the woods, and move some light armour into support the troops on this flank. 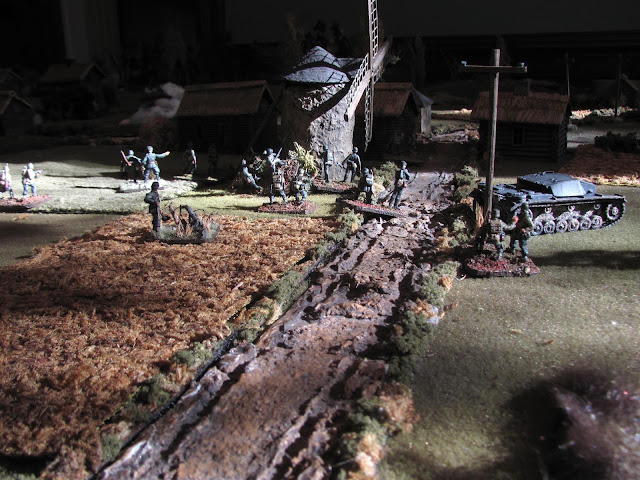 German reinforcements arrive at a key point, disembark from their transport and move to invest the second village but find it abandoned by the enemy. However these troops are now dismounted and a long way from the action!
One of the newly arrived Stug’s support them while the second peels off to go help the battered 3rd Kp. fighting it out south of the the other village. 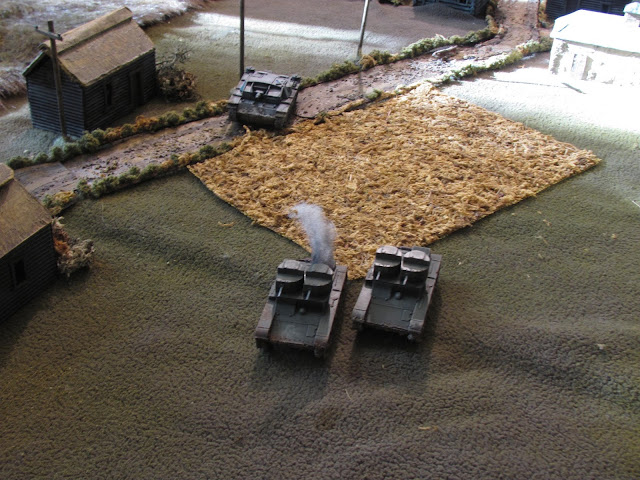 With their tails between their legs the two T26/31’s that had been demonstrating on the Russian left flank are hustled by the Stug back towards their postions by the ford. But their presence has served the Russian purpose, drawing off valuable AT resources in defence of the German troops on this wing. 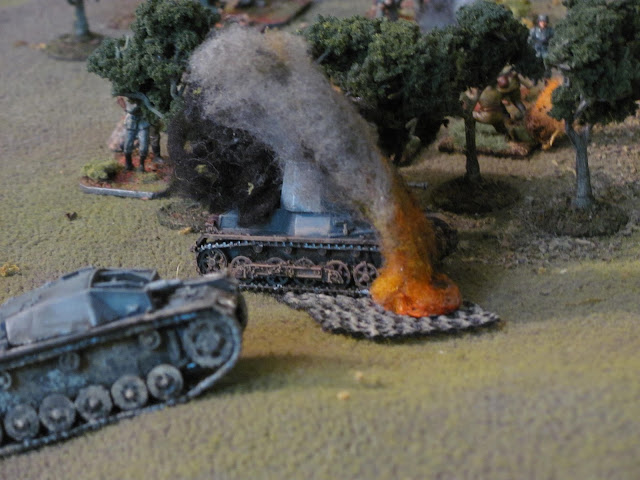 20. So that's where the minefields are!

Desperate to break the deadlock that has stymied 3 Kp.’s attempt to take the woods, the Germans move in one of their Panzerjagers as well as a Stug. But the SP gun runs afoul of a minefield, discovering late in the battle where the Russians have placed this asset, and is put out of action. 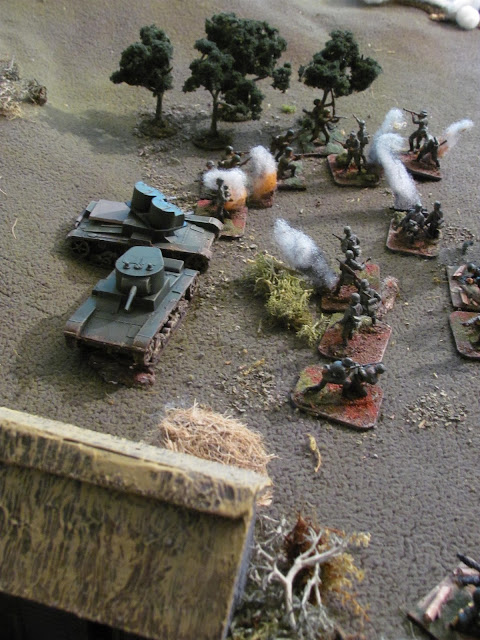 21.Russians hold the woods but at a cost

Wth the trees stripped away to see the action in the woods (flocking marks perimeter) the remnants of 2 and 3 Kp. rally once more in a do or die attempt to carry the woods. They partially succeed, clearing the way for a close assault on the Russian armour which destroys one tank and drives off the other. But it is too little too late as morale finally fails and the German infantry abandon the position en masse in a headlong dash back towards their lines. 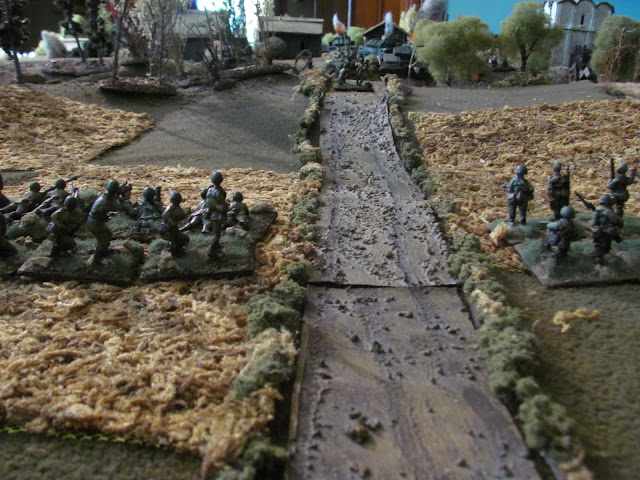 Russian reinforcements, a third infantry company and a company of engineers arrive east of the river and only a short march to the crucial bridge and bridgehead which is still in friendly hands. 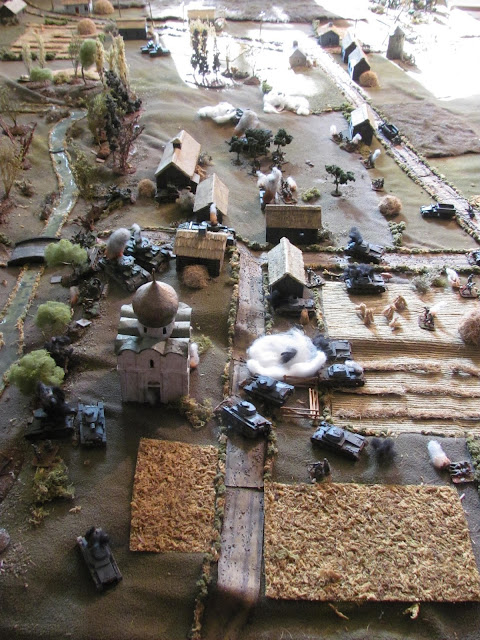 This overview shows the end of the battle. After two full days (real time) of hard fighting, the German armour still stays stalled out northwest of the village. Although hard-pressed, the Germans maintain a superiority of armour over the Russians. But the German infantry have taken a beating, with all companies well in access of 50% casualties, demoralized and in full flight while the Russians are still well in control of bridge, fords and one of the villages with more infantry coming in in support. The Germans call it a day.
We all agreed it had been a satisfying two days of locking horns in miniature. Despite some serial bad rolls on the part of the German players they still took the micky out of the Russian armour and, at the end of Day 1 of play, looked as if they might well carry the village and woods, with only Day 2 turning the tide irrevocably in favour of the Russians.