The Battle of Espinosa de los Monteros was fought on 10 and 11 November 1808 at the township of Espinosa de los Monteros in the Cantabrian Mountains. It resulted in a French victory under General Victor against Lieutenant General Joaquín Blake's Army of Galicia.
On the first day of the battle, Victor, seeking an easy victory to erase his humiliation at Valmaseda, launched a series of ill-advised attacks that were thrown back with heavy losses by the disciplined regulars of General La Romana's Division of the North. By nightfall, Blake's positions still held. On the morning of 11 November, Victor regained his composure and coordinated a massive French attack that pierced Blake's left wing and drove the Spaniards from the field.
Although not a decisive defeat in itself, the hopeless confusion of the tattered and weary Spanish army, which had neither a government nor a military command structure to coordinate it, meant that Espinosa marked the deathblow to Blake's Army of Galicia. Blake, to his credit, led his remaining men through an heroic retreat west through the mountains, escaping, to Napoleon's disbelief, Soult's pursuit. However, when he arrived at León on 23 November, only 10,000 men remained under his banner. (edited Wikipedia entry)

In our refight the scenario focuses on the second day of the fighting. It was played out on a 4.5' X 4.5' board in 1/72 scale, using primarily HaT miniatures (with some Emhar for the Spanish line) and using the AoEII rule set.
The Spanish outnumbered the French but a large percentage of their force, the Division Asturiana were rated irregular conscripts, while the remainder of their force was largely conscript. The French on the other hand, commanded far better forces including, in AoE terms, one brigade of élite light infantry. Victory conditions were based on losses plus additional VP's for the French if they successfully seized Espinosa and the bridge crossing. Army cohesion rate was set at 30% losses for the French and 25% for the Spanish.

The day dawns with Blake, having driven off Victor's forces the day before, preparing for a second onslaught. 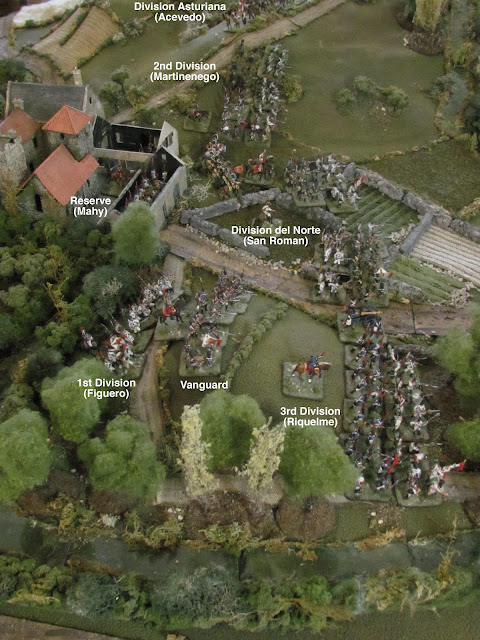 Blake deploys his forces in front of Espinosa, anchoring his right on the Rio Trueba and his left high up in the hills north of the town. 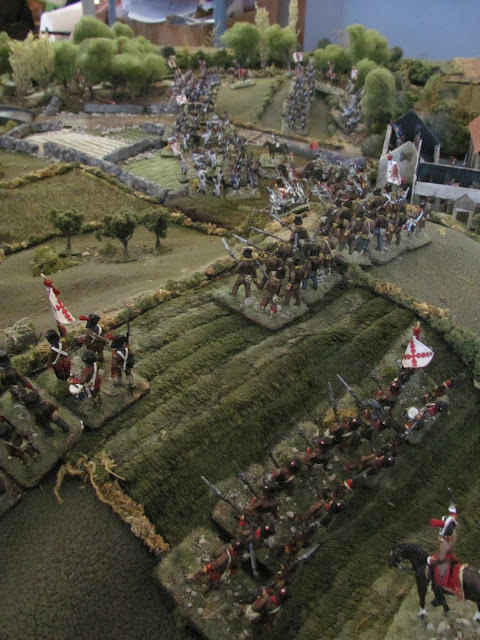 2. View from the Spanish left

Acevedo deploys his Asturians in three lines of battle just back from the ridge to protect them from French skirmishers. These are newly formed militia with less than a month's training and probably the weakest part of the Spanish line but it is hoped that the steep hills in front of them will deter the French from advancing on this flank as it did in the previous day's battle. 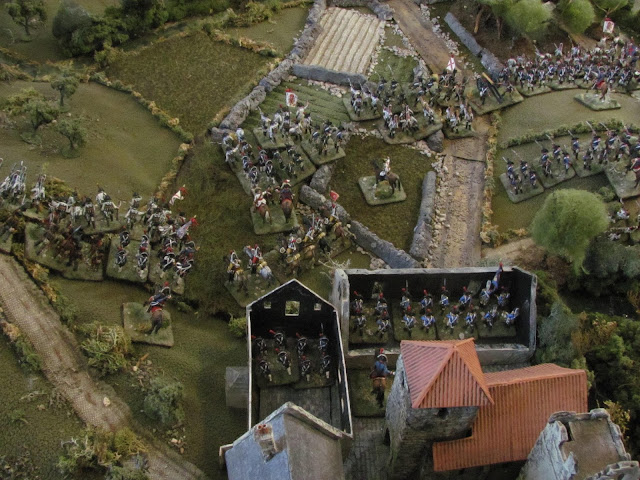 The Spanish position centre and right is very strong with the lone Spanish battery deployed dominating the road, and an area of stone-walled fields bordered by woods stretching between Espinosa and Quintana de Los Prados, providing the Spanish with plenty of defensive cover. 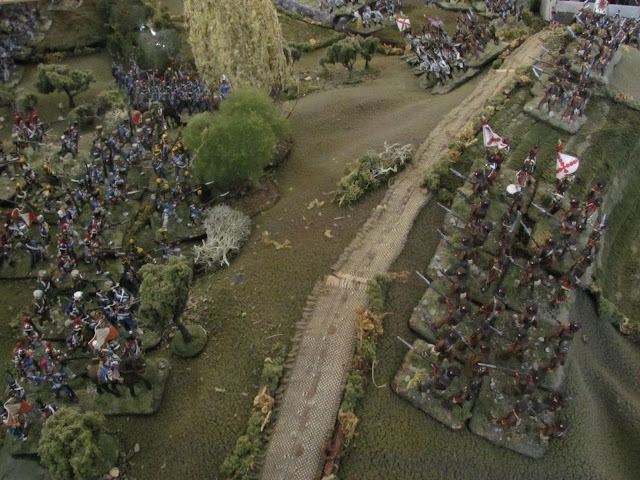 In tirailleur formation Victor quickly pushes his 1st and 3rd Divisions up into the hills against the weak Spanish left. The woods covers their advance as they approach the Asturian militia deployed out of sight beyond the ridge. 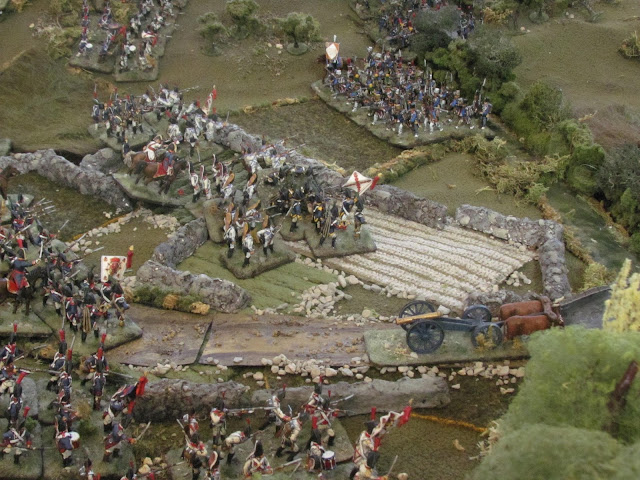 Blake advances his right along with his cannon to engage Lapisse's 2nd Division before they can take advantage of the walled fields west of Quintana de Los Prados. 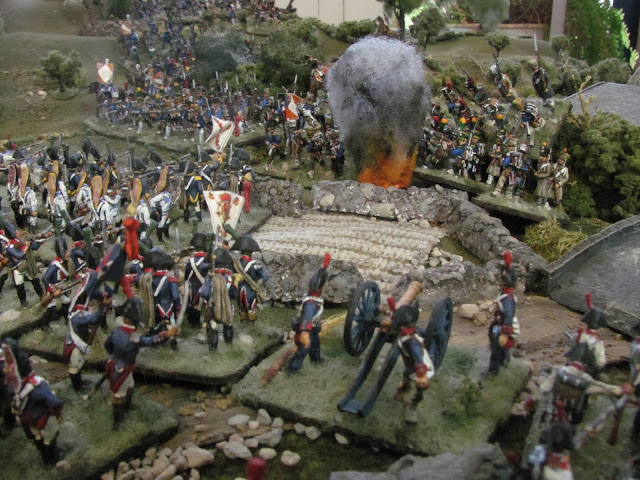 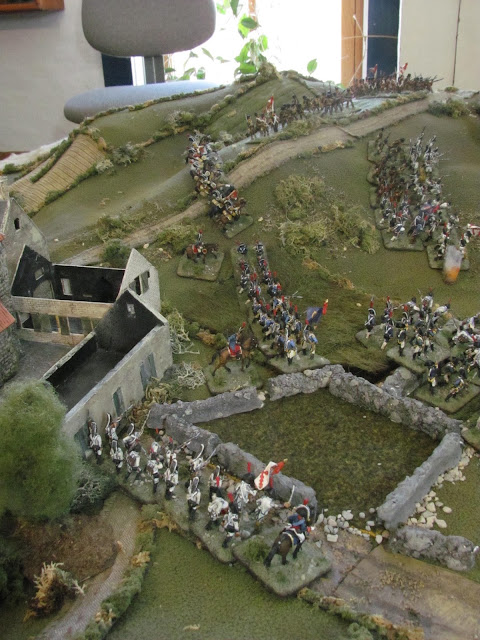 7. Spanish shift to the left

Realizing Victor is sending the bulk of his forces against his left, Blake shifts Martinenego's 2nd Division (upper right) along with San Roman's Almansa Dragoons up into the hills in support. Martinenego's troops immediately come under fire from the thick screen of French skirmishers. Meanwhile the reserve, under Mariscal do Campo Mahy, exits Espinosa to fill the gap. But the going is slow for the Spanish in this difficult terrain. 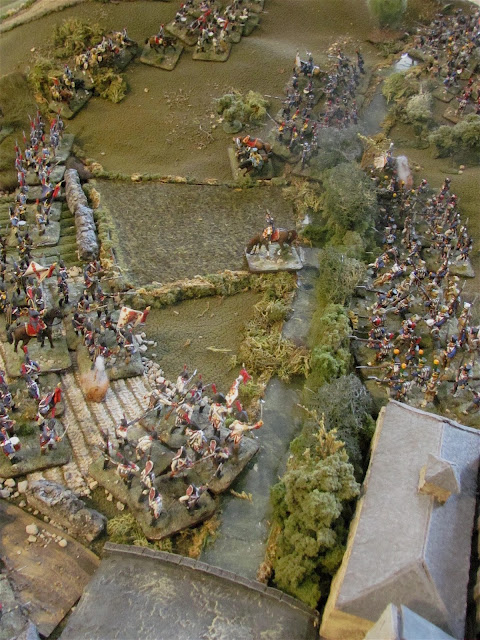 An initial French assault hits the Spanish right, gutting and driving off the Spanish vanguard and making deep inroads into the Spanish lines. But the Spanish counterattack, and Lapisse's troops are driven back out of the walled fields. 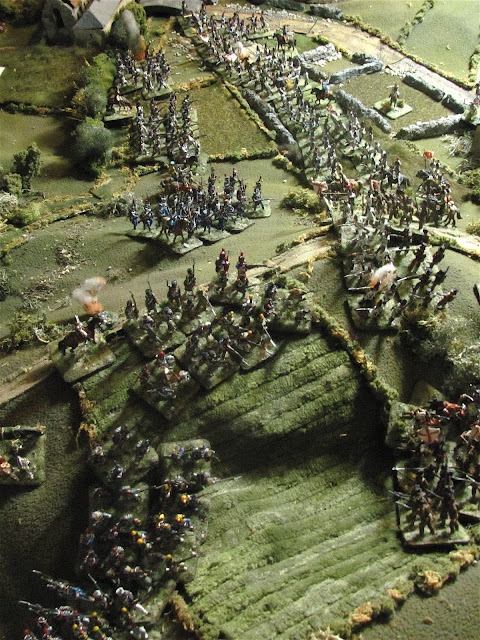 Seeing the French forming into line of battle and unable to get his reinforcing troops up into the hills quickly enough, Blake attempts to pull his Asturian Division back towards Espinosa. But the untrained militia prove hard to get moving and de Ruffin's 1st Division drives them off the ridge with casualties. Martinenego's troops, however, manage to form up to the Asturians' right, and the Spanish line holds, although pivoted now so that it is angled from the hills down to Quintana de los Prados. 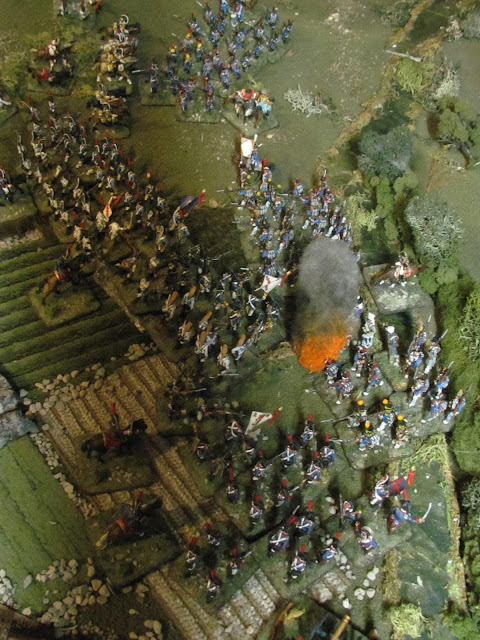 The Spanish right continues to hold, with both of Lapisse's brigades seriously battered and worn. The Spanish now venture out from the protection of their walled fields and take the fight to the enemy, while to the west (top left) the Spanish cavalry, in their first and only action, charge the French centre, hoping to blunt their attack. They are easily driven off but force the French into square. 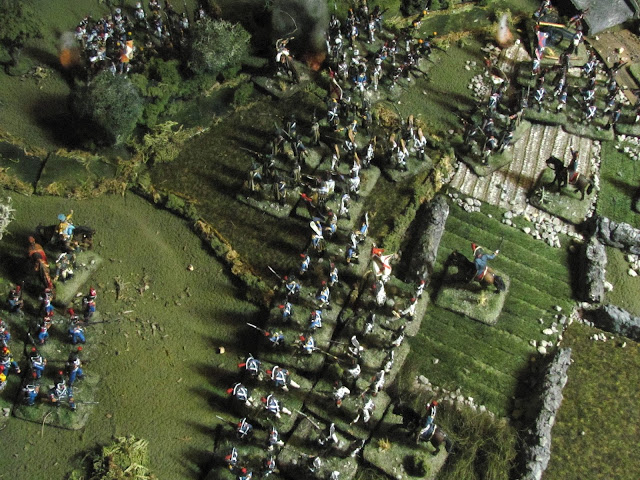 As seen from above, Lapisse's 2nd Division is once again forced back over the run off north of Quintana (top) while Mahy's reserve supported by Figuero's 4th Division advance against de Pacthod's légere (left). 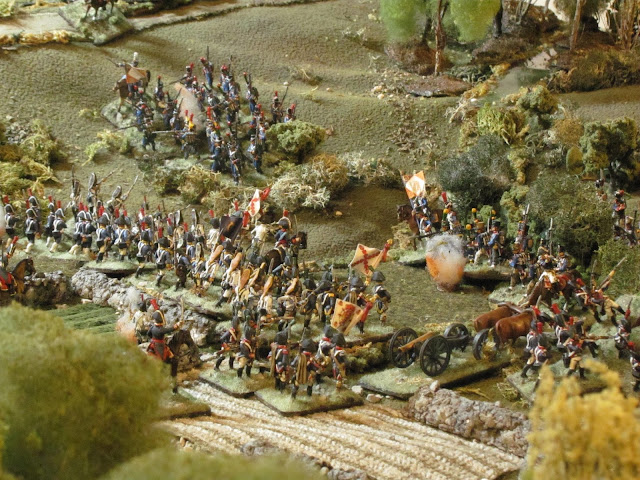 De Pacthod's brigade (upper left) becomes increasingly isolated as the French left is driven back while the right has disappeared into the hills north of Espinosa in pursuit of the retreating Asturians. 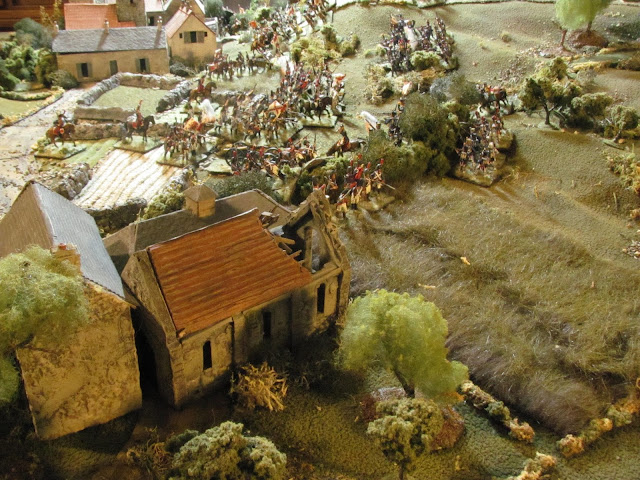 With one of Lapisse's brigades spent and retreating from the field Riquelme sends his soldiers across the runoff north of Quintana where they emerge on the flank of Lapisse's second brigade. 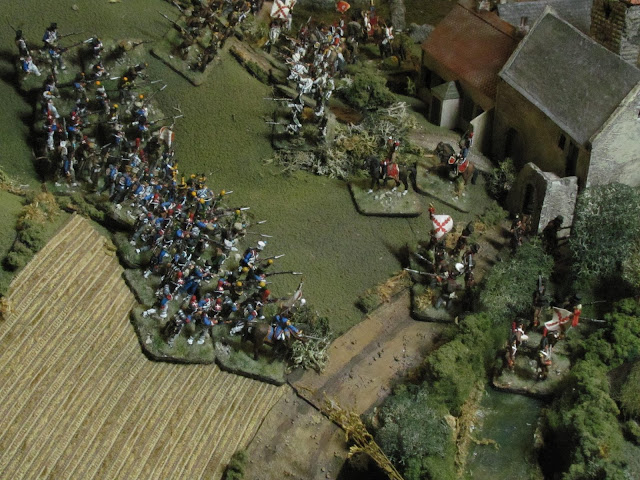 14. Asturians driven from the field

Two of the three brigades of Division Austriana rout across the Rio Trueba as the French turn the Spanish left above Espinosa. Remnants of Martinenego's division fall back on the town. 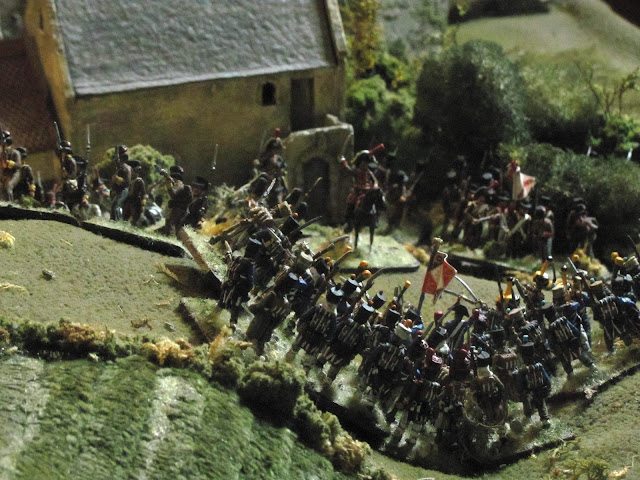 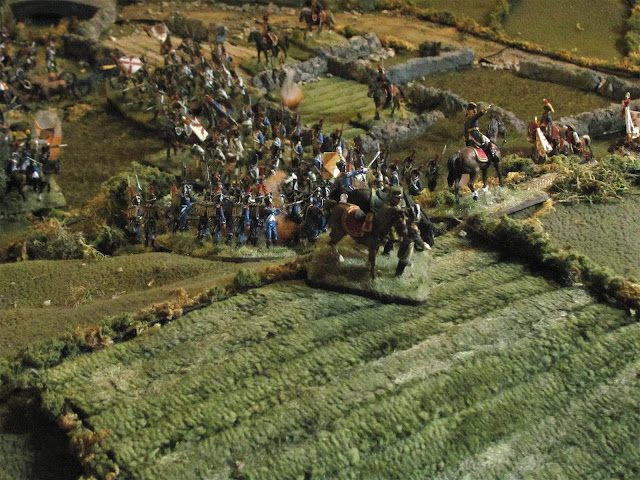 16. Vilattte and de Ruffin direct their forces from the ridge

From the ridge Generals Vilatte and de Ruffin direct their troops in their assault on Espinosa. 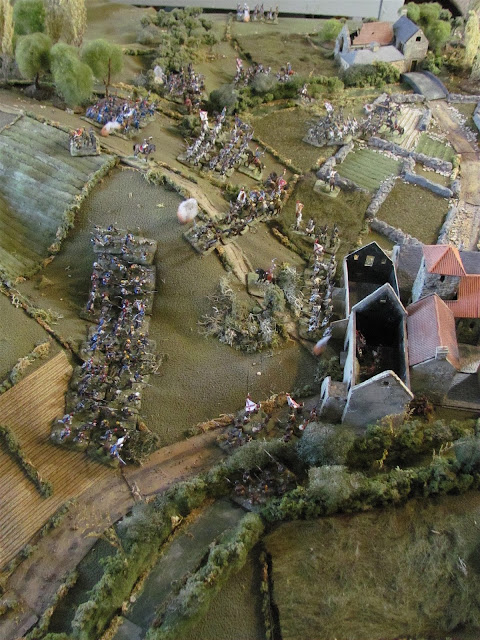 At bottom left the 1st Division and Brigade Puthod advance on Espinosa as most of the Asturians rout over the Rio Trueba and the battered Spanish 2nd Division reel back into Espinosa. In the upper left Vilatte's light infantry are driven back into the hills by the Spanish centre while on the Spanish right Riquelme shatters one of Lapisse's brigades (top centre) while the second retreats back into the hills. 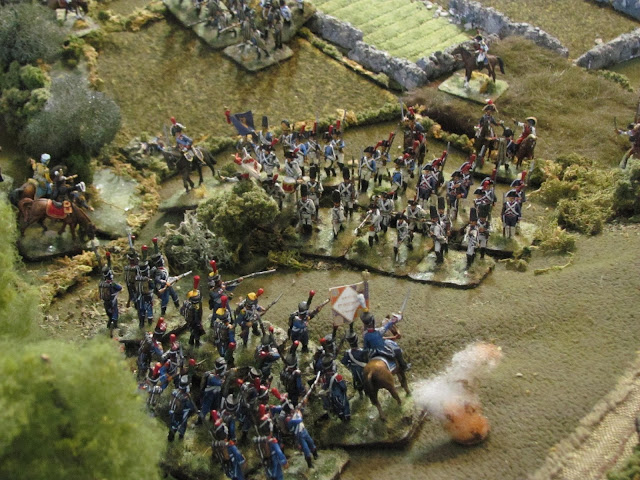 18. Brigade de Pacthod retreats in front of the Spanish centre 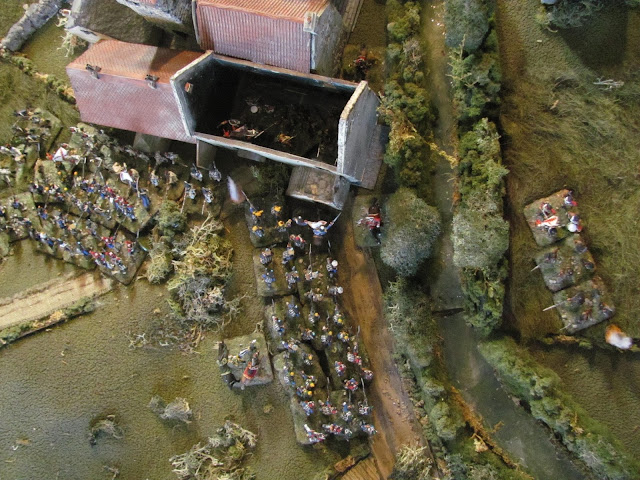 The French right storms the town, shattering one of Martinenego's brigades before they can properly deploy into the houses and driving the second deep back into Espinosa, from where they rout shortly afterwards. Including the last of the Asturian brigades (shattered by enfilade fire), all five Spanish brigades on the French right are now destroyed or routed. 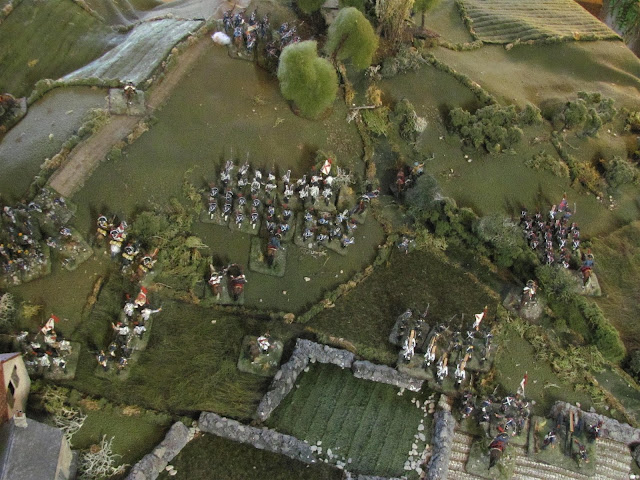 20. Beginning of the end overview

At the top Vilatte's light infantry retreat further into the hills along with one of Lapisse's battered brigades (off picture). Despite their successes on the right, the Spanish losses on their left are so great that they begin to lose any army cohesion as the French (far left) turn that flank. 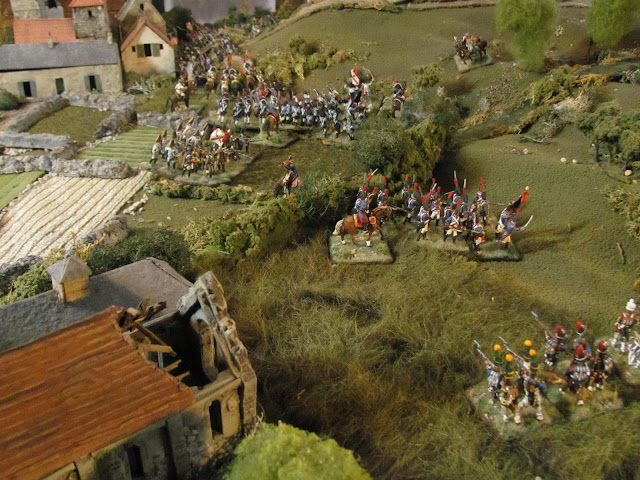 The second of Lapisse's brigades briefly rallies (bottom right) to send some skirmish fire into the Spanish flank before retreating from the battlefield in disorder. 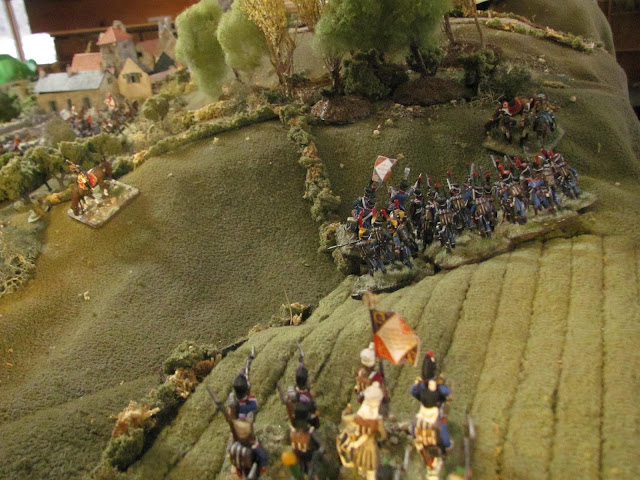 22. Victor attempts to rally his troops…

Marshal Victor Perrin (upper right) and General Lapisse (upper left) ride into the hills to try and stop the troops on this flank from exiting the battlefield. 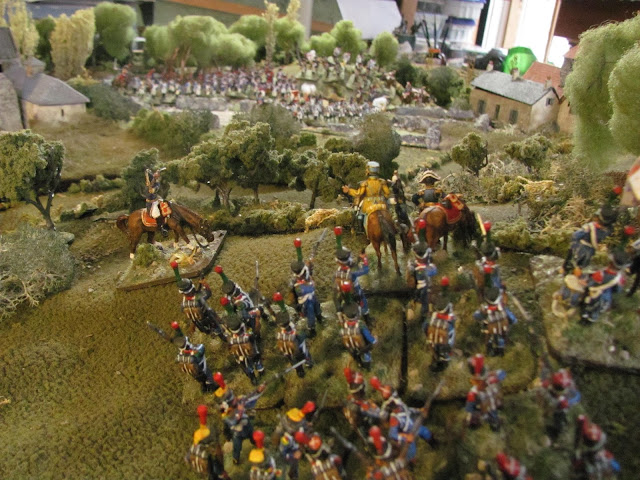 23. In time to witness the Spanish retreat

Lapisse's remaining brigade slips away but Victor manages to rally Vilatte's légere and lead them back over the ridge in time to see the Spanish retreating from the field. 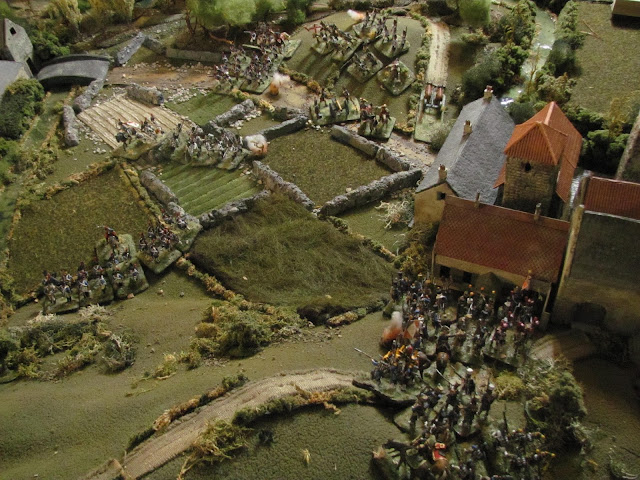 24. Spanish withdraw across the Rio Trueba

The battle ends with the remaining Spanish soldiers retreating and routing from the field as a result of the loss of army cohesion. The French, although less badly battered, are not much better off and have no stomach for the pursuit, happy to see them go. The fight ends in a French victory, in possession of the bridge at Espinosa but at the substantial cost of a third of their army.
The ending of the fight was a bit anticlimactic. During the battle the French had such success on the Spanish left, and the Spanish the same on the French left that the entire battle pivoted from north-south to east-west. But in the end Spanish losses were such that they were forced to retreat and leave the field to the French.
Posted by Bill Slavin at 4:14 PM