I've been waiting for a long time for the HaT French in Greatcoats 1808 to be released and finally gave up. For quite a while I've been wanting to introduce a few greatcoated figures into my French Peninsular army, so I resorted to buying the 1805 set with bicornes.
The troops making up these two regiments (based on the 54th and 94th) are from the HaT 1808 line infantry set and the HaT 1805 greatcoat set, with one standard bearer figure and sapper stolen from the light infantry command set and altered. I head swapped shakos onto the greatcoated figures, some heads from the line set, and then, after getting tired of destroying perfectly good plastics, from an old set of Airfix French artillery I had bought on a visit to England in 1975! So much for sentimentality…
But the Airfix heads were the right size, although the shakos a bit diminutive. As I planned to make them covered these were heightened slightly before covering them in modelling paste.

Other alterations were shako covers on some of the line, converting a greatcoated grenadier sergeant to a 54th Line standard bearer (I know, he should be a sub lieutenant, but he isn't - maybe a deuxième porte aigle who has stepped in?)
I also added the cloth on the back of some of the shakos to keep the sun off the soldiers' necks, something I've seen in a lot of images from the Peninsular War! This was simply a small piece of paper, attached with mat medium and then reinforced with a bit of modelling paste.
The painting I based on information gleaned from JJ's Wargames excellent blog as he has covered both these units in past posts. Anything I got wrong are my own errors!
All in all a lot of fun and now at least some of my French are looking like proper veterans. I still have half a box or more of the bicorne figures but may paint them as-is to mix into some pre-1808 scenarios. 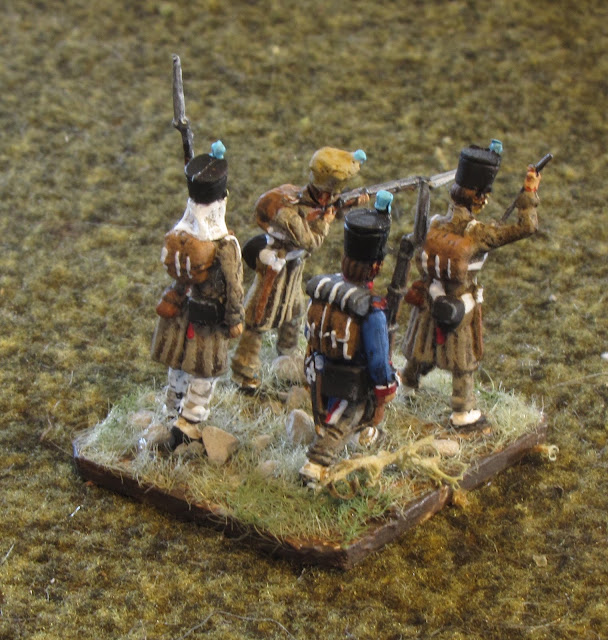 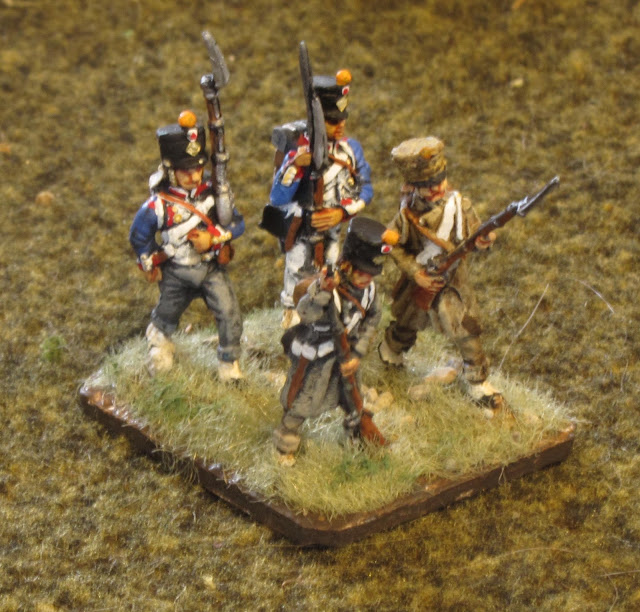