We played the Primosole Bridge scenario this weekend, a scenario I wrote a few years ago for the Battlefront WWII ruleset. It is the first in a series of Italian scenarios that we plan to play in chronological sequence as a sort of campaign over the next while.
The scenario is based on Operation Fustian, a British Airborne drop designed to seize Primosole Bridge, 7 miles south of Catania and an important bridgehead for the advance of Montgomery's 8th Army up the east coast of Sicily.
On the night of July 13, three days after the launching of the Allied invasion of Sicily, paratroopers of the British 1st Parachute Brigade set out to seize Primosole Bridge spanning the Simeto River. It was an audacious plan, with the intention of paving the way for the 8th Army’s advance up the Sicilian east coast. The flight was a disaster with friendly fire shooting down a number of planes and scattering the rest. The jump was widely dispersed and of 1,856 British paratroops only a fraction were dropped close enough to the bridge to join in the fight.
Unknown to the attackers, their German counterparts, paratroopers of the 1st Machinegun Battalion of the 1st Fallschirmjäger Division were dug in about 2000 meters south of the bridge. A number of the British paratroops were dropped near these German positions and at first the defenders mistook them for expected fallshirmjäger reinforcements. The battle rapidly split into two fights as a small group of British seized the bridge from the startled Italian defenders while others battled out for the high ground south of the bridge (hills designated as Johnny 1, 2 and 3). Both groups were joined by other men from the brigade who trickled in during the night. By the morning of July 14th 12 officers and 283 other ranks had gathered around the tenuous bridgehead.
This scenario is based on the fighting around Primosole Bridge on that day, focusing on the battle for the bridgehead. 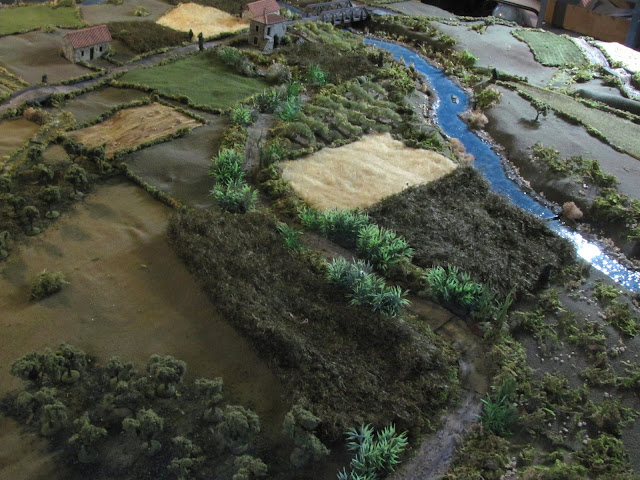 The battlefield as seen from the northwest. The Fallschirmjäger ad hoc company entered from this corner, crossing a sunken road lined by a cactus hedge and using the tall crops and vineyards to close with the British, who were dug in around the bridgehead.
The Fallschirmjäger signals company attacked from top left while the 88's positioned in the orchard middle left. 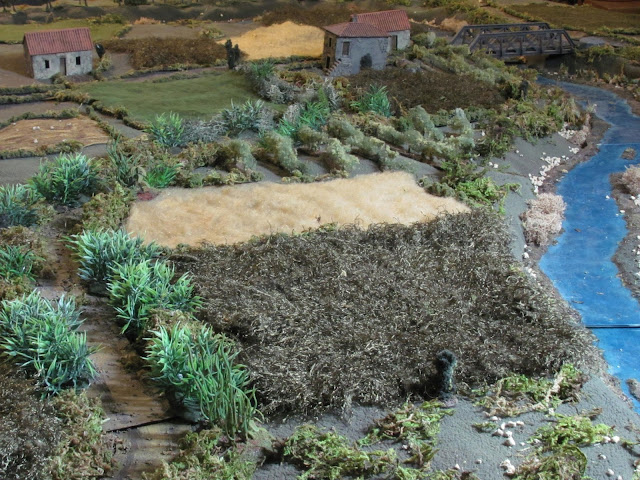 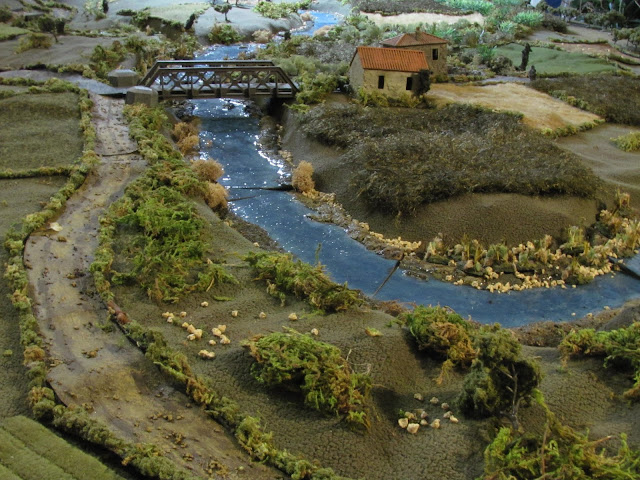 Primosole Bridge spanning the Simeto River, with its pillboxes guarding the south access. Scattered elements of the the 1st Parachute Brigade had earlier seized it from the Italian defenders and are now dug in on the north bank. We played this scenario blind, with no dummy markers and the defenders only placed when they were spotted. Their placement was based on previously setting up and then photographing their positions before removing them. 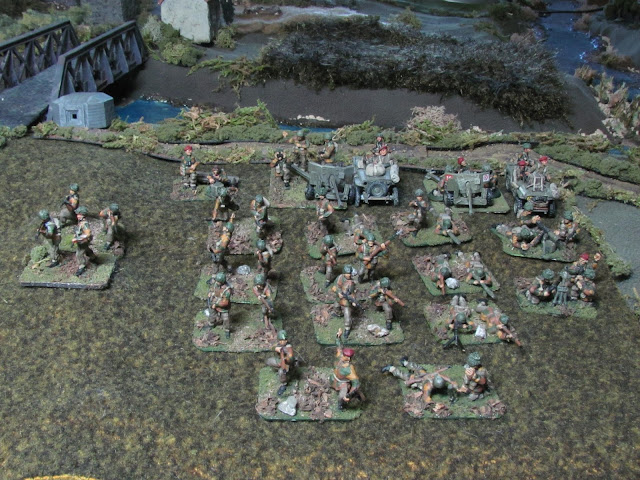 The bridge is defended by troops of the 1st Battalion, 1st Parachute Brigade with elements of the third attached, totalling about company strength in total. A Vickers machine gun and 3” mortar, along with a troop of 6 pdrs. from the 1st Airlanding Battery bolster the defence. More elements of 1st battalion (2 stands) will arrive on Turn 5 of the fight. The bridgehead is under the command of Lieut. Col. Jock Pearson of the 1st Battalion with Brigadier Gerald Lathbury, earlier wounded by an Italian grenade, also present. 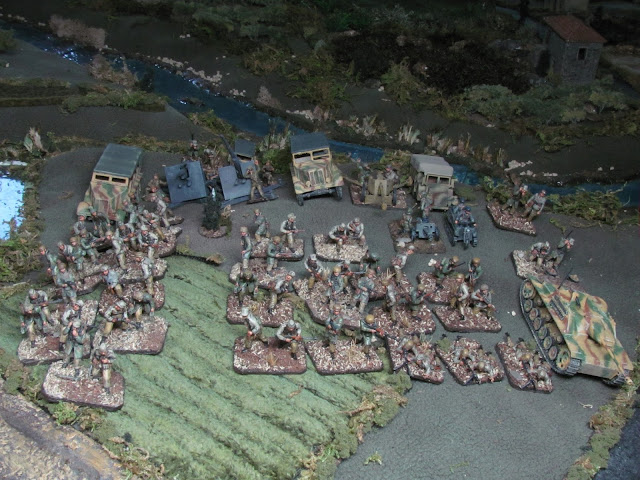 The German response to the attack is a hastily gathered kampfgruppe made up of the 1st Fallschirmjaeger's signal company, and a larger ad hoc company composed of cooks, quarter masters and administration staff from Catania Airfield. The kampfgruppe is bolstered by an 88 AA battery, a Pak38 50mm AT gun and a 75mm recoilless gun. A Stug III G lends its heft to the attack and a light battery of 105's gives indirect fire support. The Germans outnumber the defenders by more than two to one, but these are not the crack Fallschirmjäger troops that make up most of the 1st FDR. 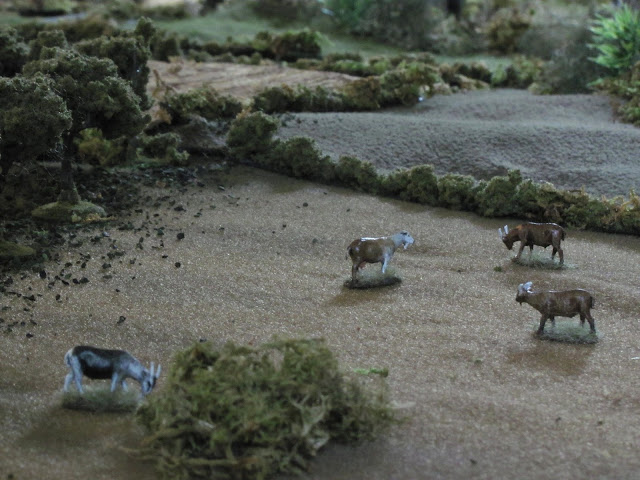 Okay, this is totally gratuitous but the night before playing I realized in a panic I had no Sicilian farm animals so painted up a handful of goats, a flock of chickens and a donkey. 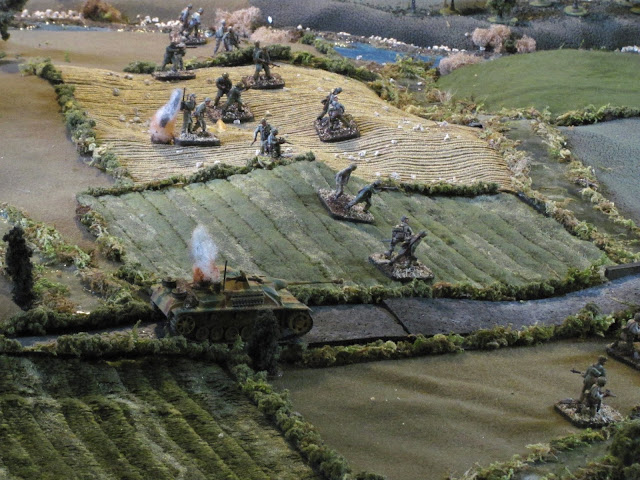 Receiving light shelling from a 2” mortar, the Fallschirmjäger signals company advances through open fields on the east side of the Catania highway, supported by the Stug III. The Stug immediately comes under fire from the British 6 pdrs. dug in by the farmhouse northwest of the bridge. 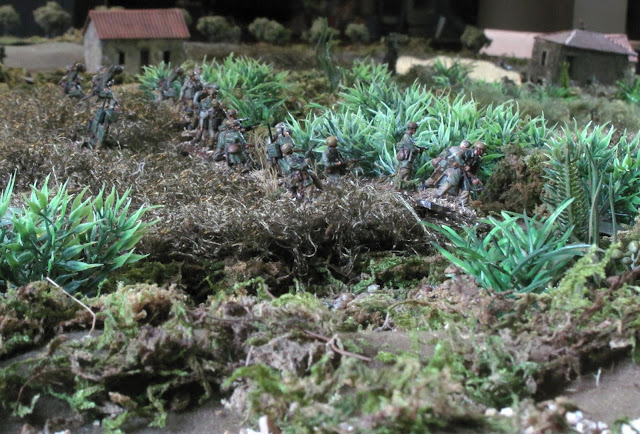 On their left flank the Germans quickly disappear into the orchards and tall crops as they approach a cactus-lined sunken road. 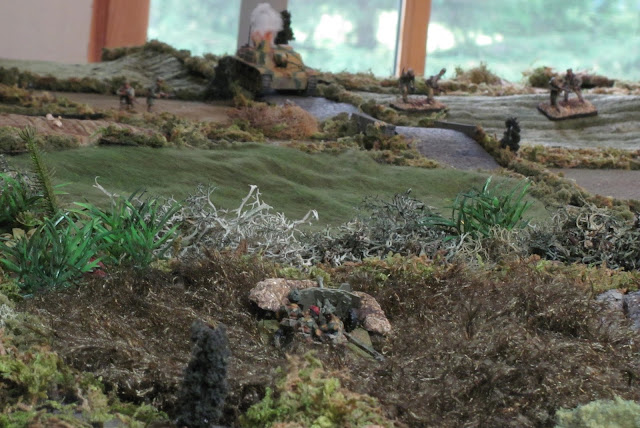 One of the two 6 pdrs. disorders the Stug as it moves down the Catania highway. 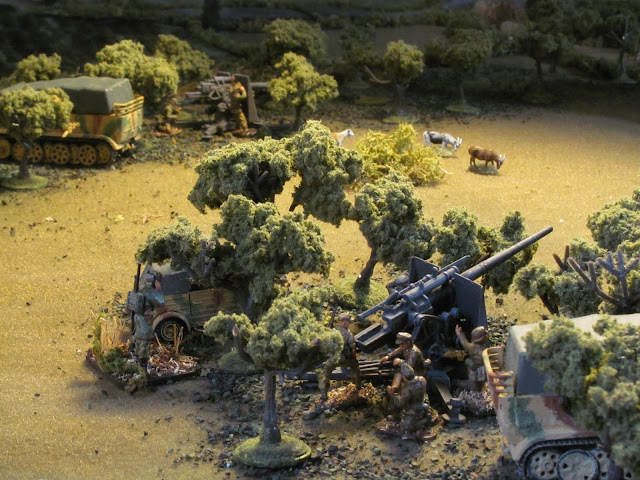 From the protection of orchards the German 88's begin shelling the British positions. Although too far away to do serious damage to the dug in paras, they manage to keep some of the enemy units suppressed. 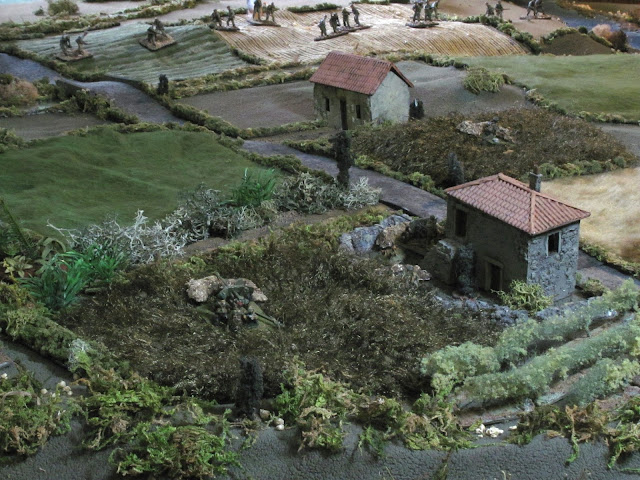 With the 6 pdrs. and mortars now firing, the German FOO marks down their positions and drops some shells on the British positions. In a lucky stroke for the Germans, the British 3” mortar is KO'd on the first stonk, depriving them of a vital asset as it is their only indirect fire weapon of any consequence. 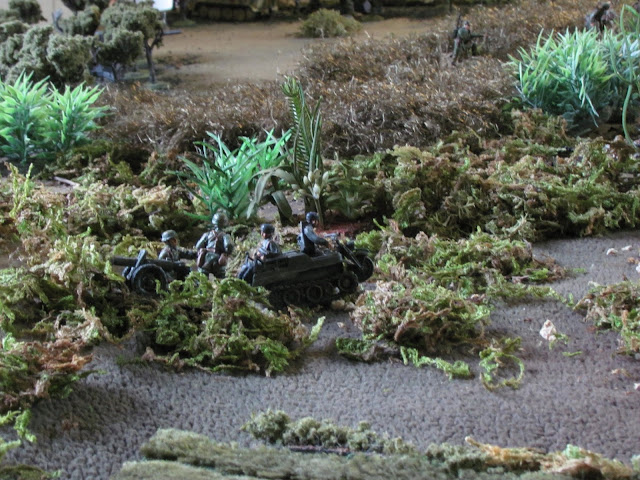 With its 75mm gun in tow, the Kettenkrad moves up along with the ad hoc company, to lend its fire support to the attack. 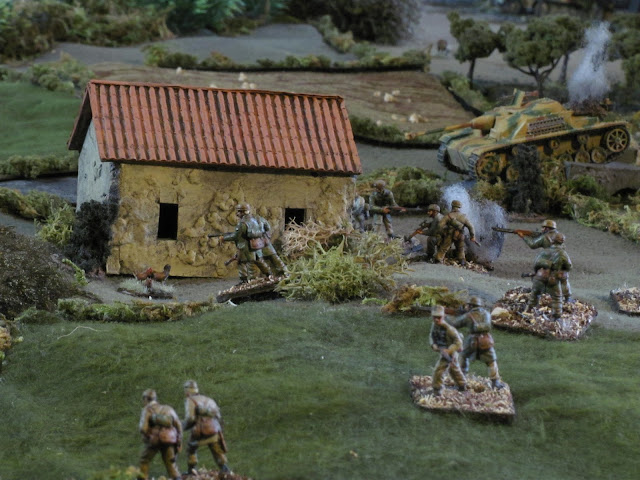 The signals company engages British paras in the first farmhouse but are driven off with casualties, as the Stug creeps forward in the background under continuous fire from the 6 pdrs. 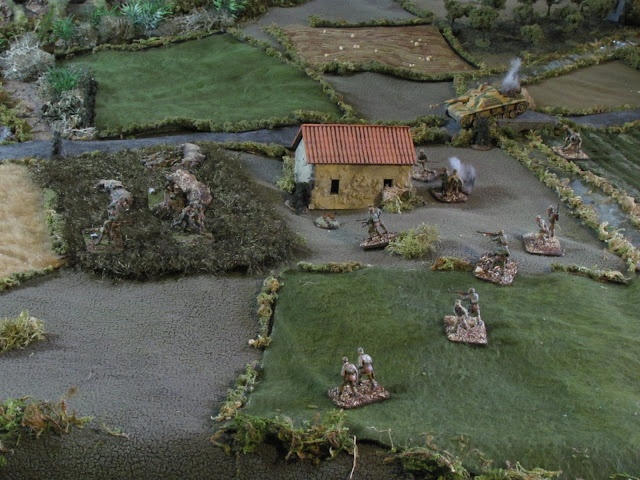 More British open fire from hidden positions in tall crops south of the first farm. The signals' company casualties begin to mount as their advance is stalled. 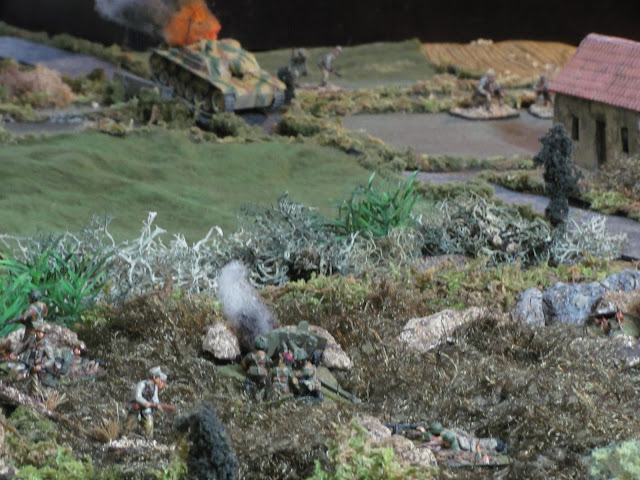 The 6 pdrs. score a direct hit on the Stug, knocking it out as lead elements of the German right flank begin to threaten their position. 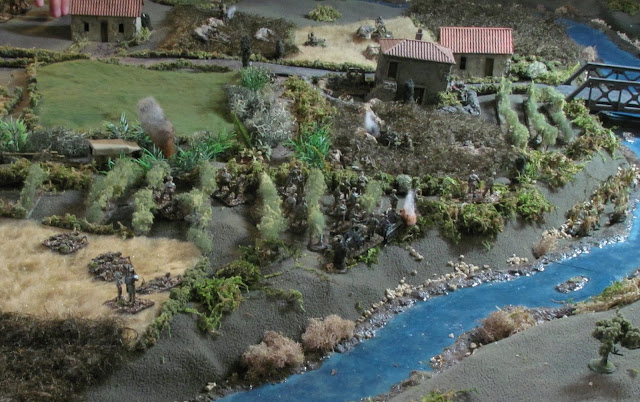 Approaching unobserved the ad hoc company falls on the British positions nevertheless waiting in ambush on this flank. Despite initial heavy casualties sheer force of numbers allows the German paras to make headway. Their 50mm AT gun is knocked out before it can emplace as its transport tries to tow it into a useful position. 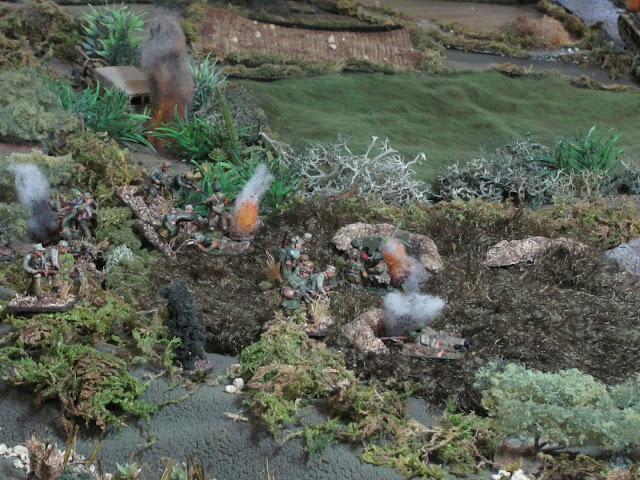 Taking heavy casualties, the Fallschirmjäger ad hoc company storms the British left flank, forcing its way into their positions and engaging one of the enemy 6 pdrs. in close combat. 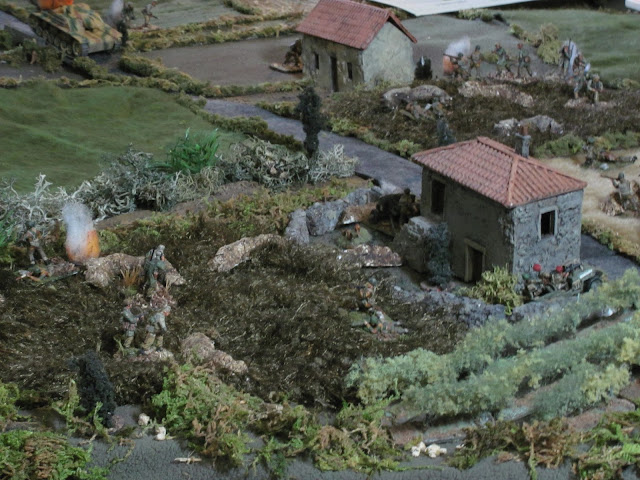 This overview of the bridgehead shows the ad hoc company (lower left) making headway as the signals company still battles it out with the stronger British elements dug in on the British right flank. One of the 6 pdrs. has now been eliminated. 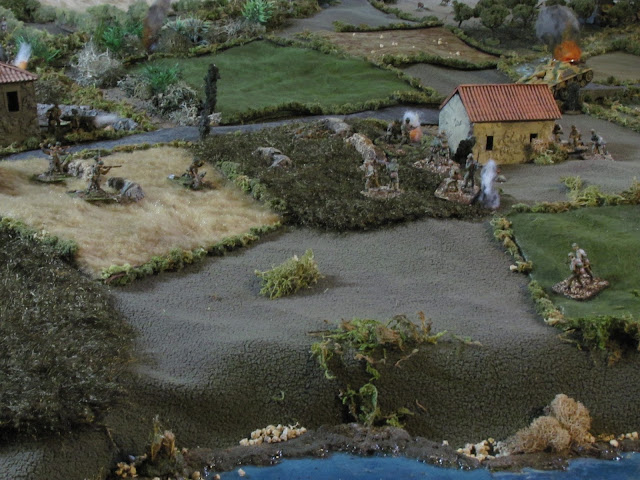 13. Airborne fall back towards bridge

The signals company on the German left flank finally seize the northern farmhouse and clean out the British first line of defence. Surviving British paras fall back to a second line dug in north of the bridge. 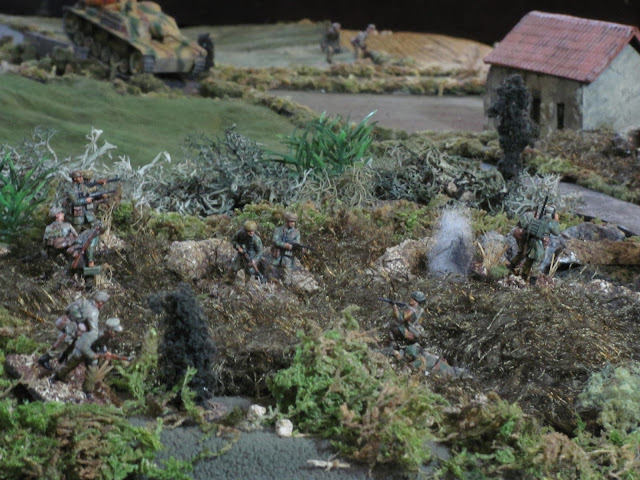 14. Cleaning out the last British resistance northwest of the bridge

The last British paras and remaining 6 pdr. fall to the fallschirmjaeger's attack as resistance on this flank is eliminated. 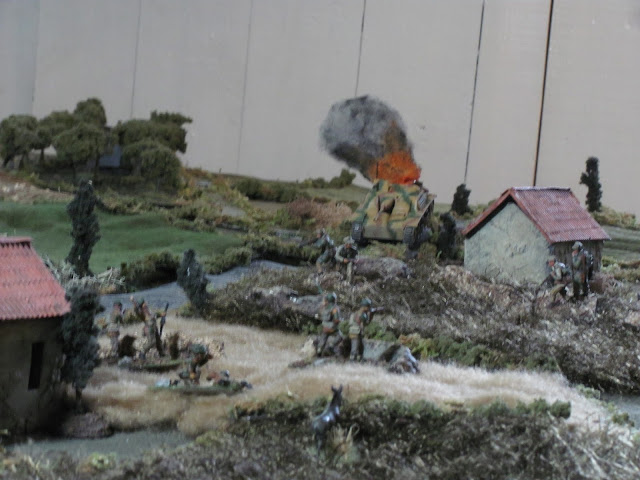 The remaining British consolidate their position on the right, but German artillery continues to soften them up as the German signals company engage them in small arms fire. 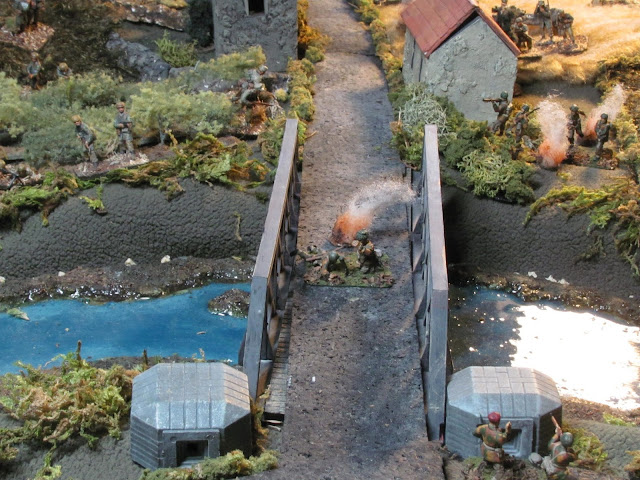 A failed morale roll sends most of the remaining defenders fleeing for the bridge, where they are cut down by enemy waiting in ambush on the north bank. Their commanding officer, Lieut. Col. Jock Pearson, already retreated across the bridge, witnesses the rout from one of the bridge's pillboxes. 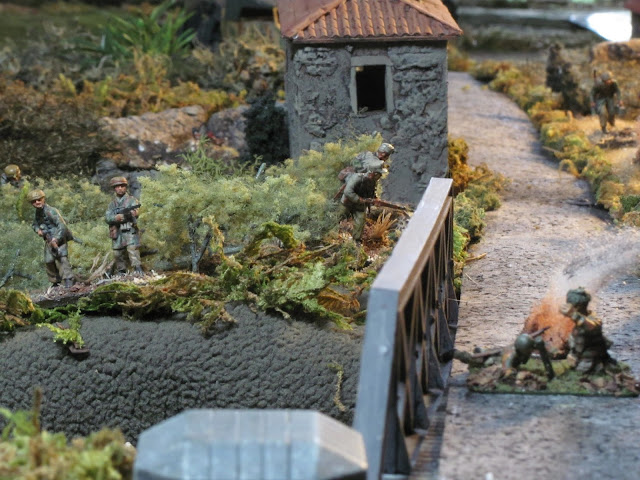 The British mortar crew meet their demise as they try to flee across the bridge. 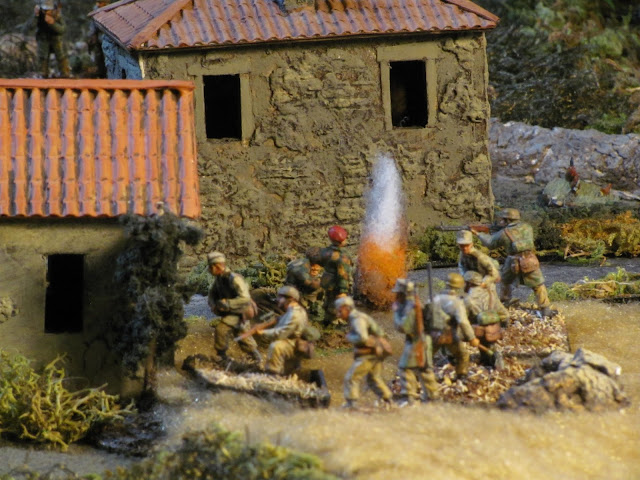 The last surviving British infantry stand north of the bridge is KO'd by artillery fire as Brigadier Lathbury, forced out of his position in the upper floor of the farmhouse across the road, succumbs to close assault. 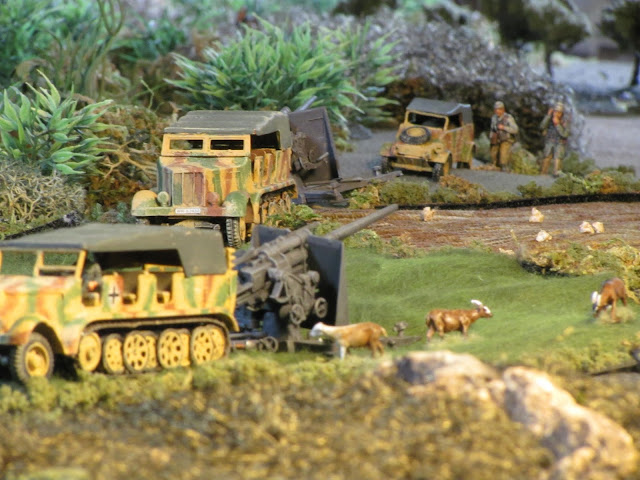 19. 88's roll up to consolidate bridgehead

With the threat of the 6 pdrs. eliminated the 88's limber up and move forward to help consolidate the bridgehead. 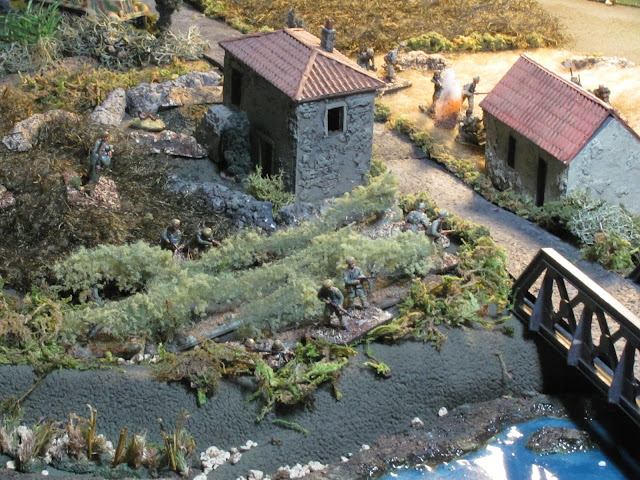 The battle ends with the Germans in full control of Primosole Bridge. Lieut. Col. Jock Pearson withdraws from his lone position south of the bridge, along with the straggler elements of 1st Battalion that failed to ever link up with their comrades. There was a slight chance that elements of the 8th Army might arrive towards the end of the fight, but these failed to show and the scenario resulted in a major victory for the Germans. A tough scenario for the British to win (historically they were pushed back off the bridgehead) it still was close fought, with both German companies taking more than 50% casualties, placing them in a position where it could just have easily been them that broke and fled, leaving the battlefield to the British.

The Historic Battle
The fight on the 14th of July was only the first of many days’ fighting around the Primosole Bridge. The rapid response by Stangenberg, whose attack went in about 2 p.m. on the 14th, succeeded in driving the British off their objective. By 5 p.m., running out of ammunition, the small force of British paratroops abandoned the north shore of the bridgehead, and were soon driven from the south side as well, withdrawing about 1200 meters south of the river. There they held on until midnight, at which time they worked their way further south, leaving their wounded behind. Unknown to Brigadier Lathbury, less than an hour after abandoning the bridgehead, at 7:30 p.m., lead elements of the 4th Armoured Brigade and the 6th Durham Light Infantry made contact with the remnants of Frost’s 2nd Battalion, still managing to hold onto the high ground of Johnny 1. Of the 295 defenders of the Primosole Bridge, 115 had been killed wounded or captured by the end of the day.