We played a small pick up game this weekend, fielding my much-loved 2 pdr. portees, and three newly painted German panzers in a non-historical fictional scenario set somewhere in the chaos following the battle at Gazala, as the Allied forces fell back towards Egypt.
The game was played in 1/72 scale on an 8' X 5' table using Battlefront WWII rules. In this scenario, a small Australian blocking force is sent to occupy the ruins of a desert fort at a crucial road junction. Armoured help is on the way, but will it be enough to stop the German column in hot pursuit of the fleeing forces? Short answer … no. 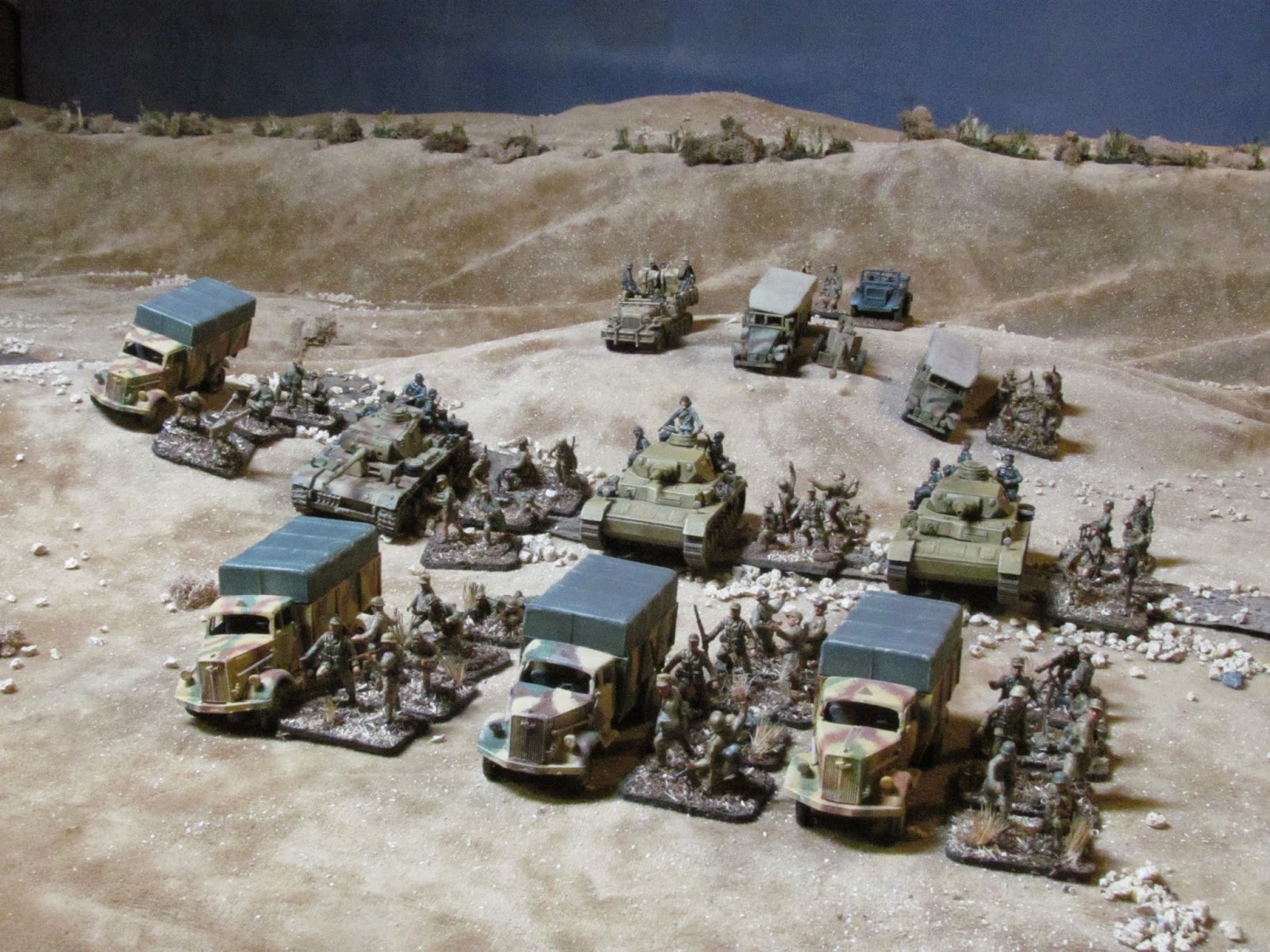 The German force consists of two motorized infantry companies (one short of transport and partially entering battle as tank riders), with an Sdkfz. 10AA halftrack and a towed 5cm PaK 38 attached. 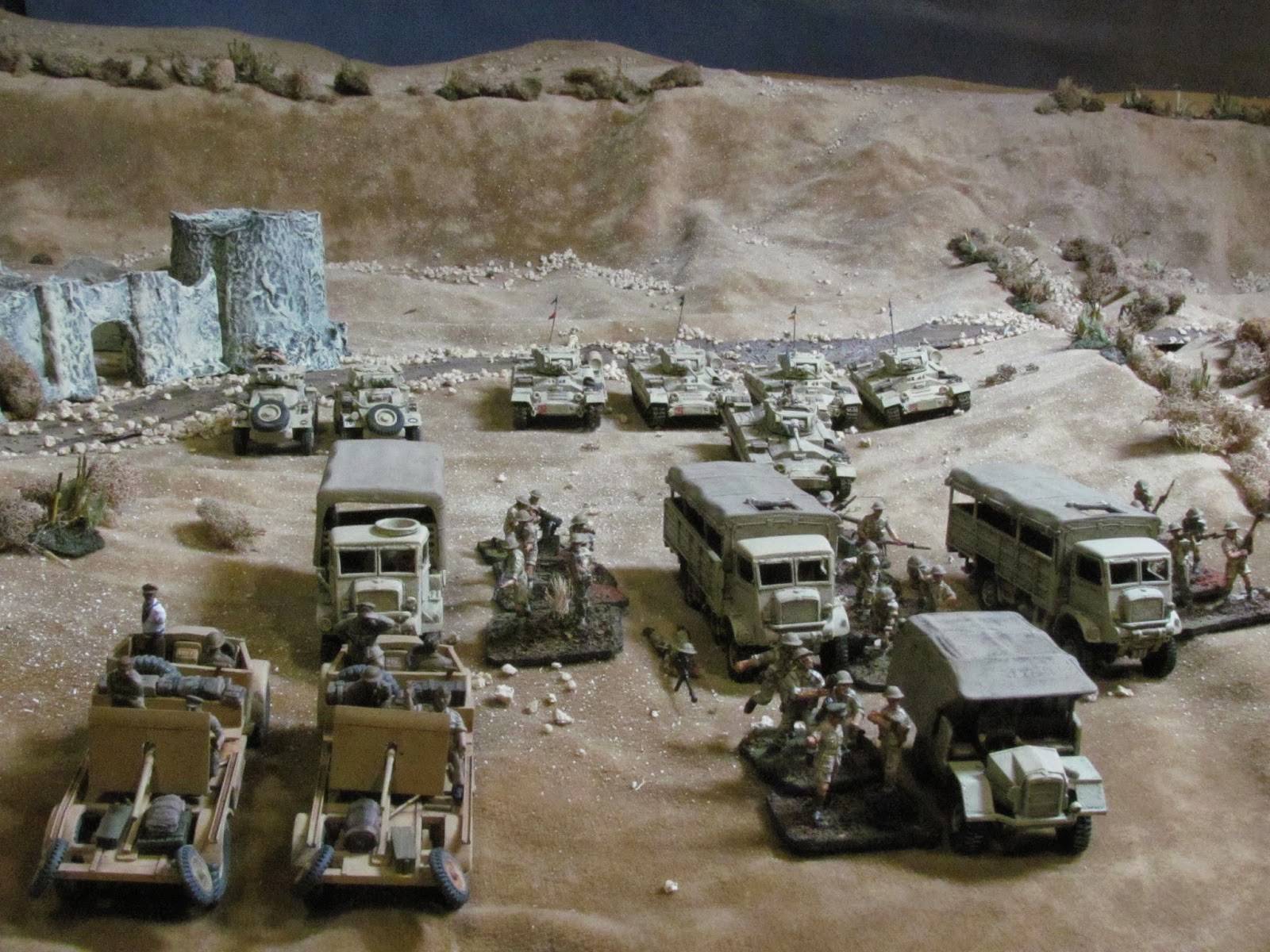 The Australian force is composed of a motor company with an attached Vickers platoon and two 2 pdr. portees.
Reinforcements, to arrive at staggered times, consist of a recce platoon (2 Humber Mk II's) and a squadron of Valentines. 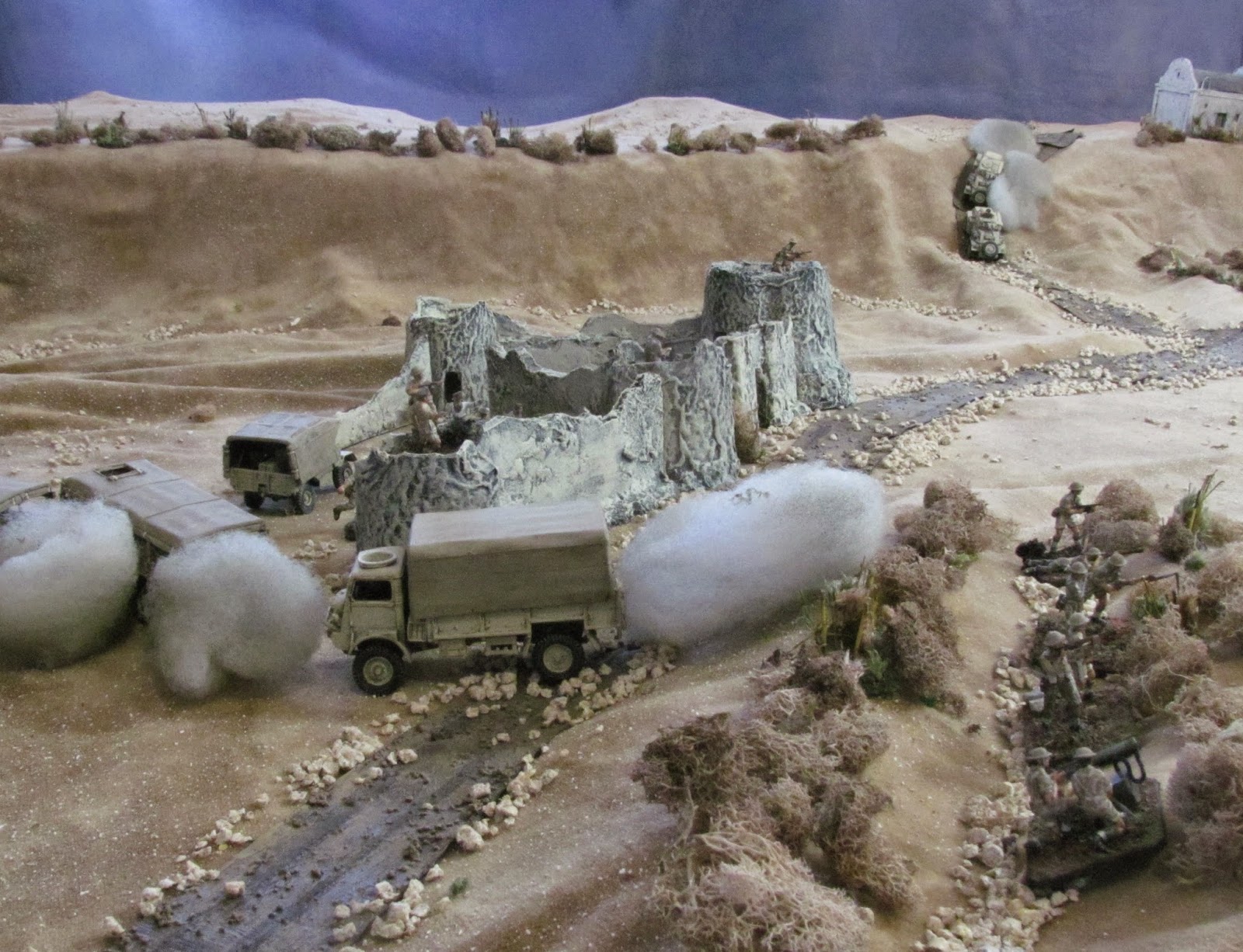 The Australians arrive on the first turn, and by the second have dismounted from their transport and taken up positions in the fort and a nearby wadi as the trucks withdraw to shelter behind the fort. In the background can be seen the armoured car platoon which is picking its way down the rough road from the escarpment, where it had arrived on Turn 2. 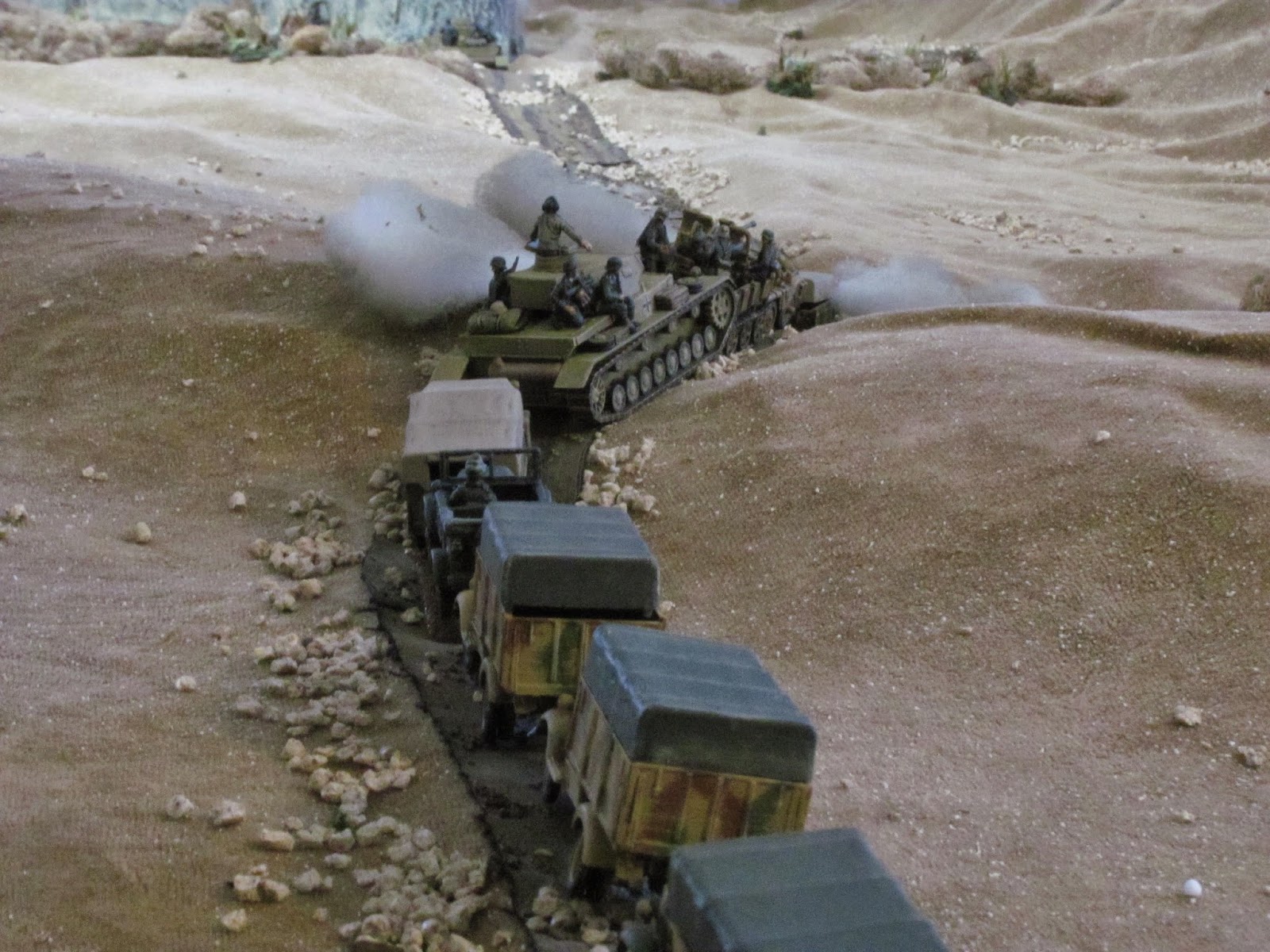 The Germans arrive from the west in convoy along the road below the escarpment. As they crest a low hill they see the fort further down the road ,as well as spotting the enemy armoured cars descending the ridge. 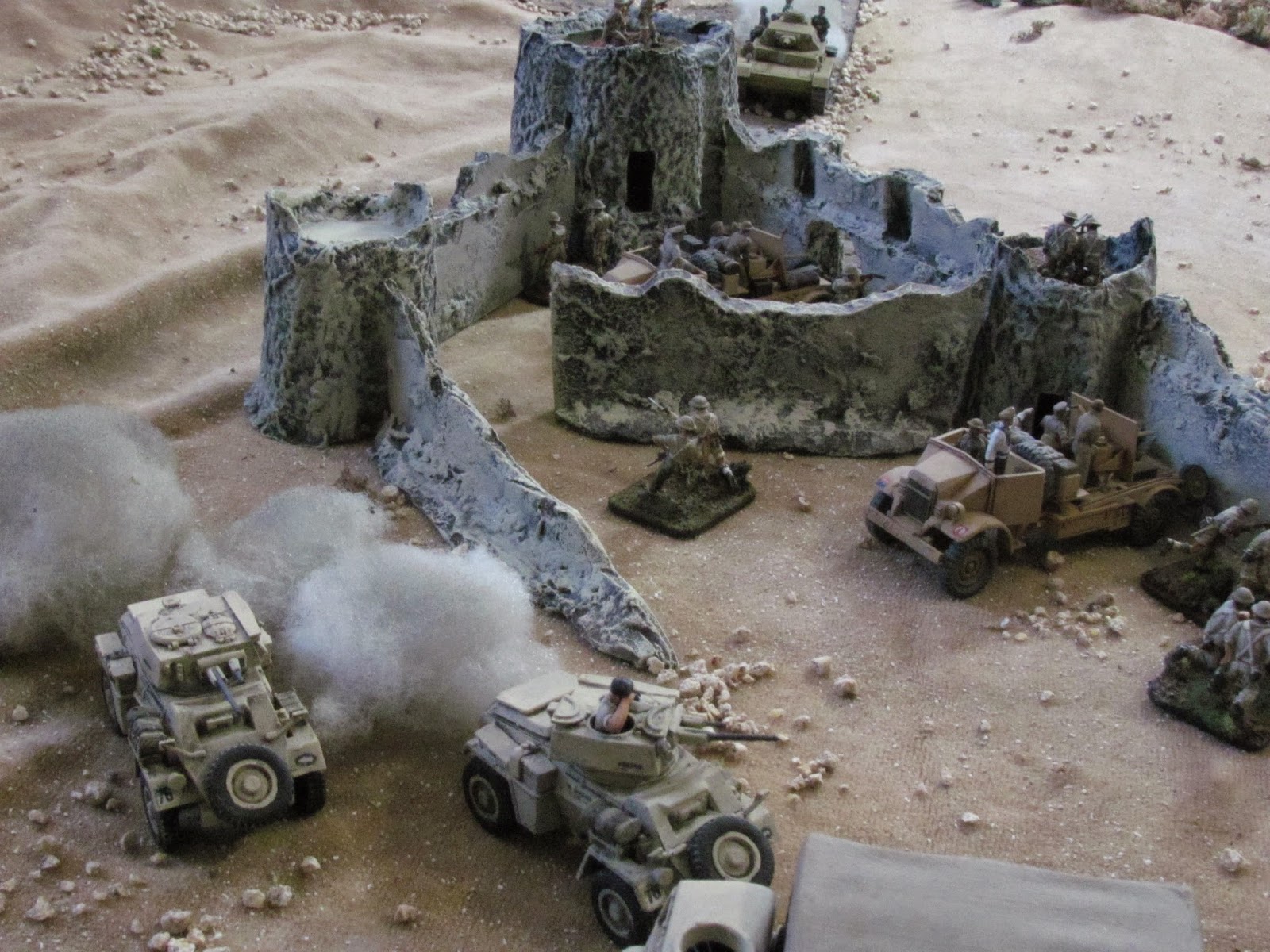 The Humbers run the gauntlet down to the fort, taking some sporadic fire from the German tanks but arriving safely. They find the Australians preparing their positions in the fort, with the portees holding fire until the approaching German armour comes within range. 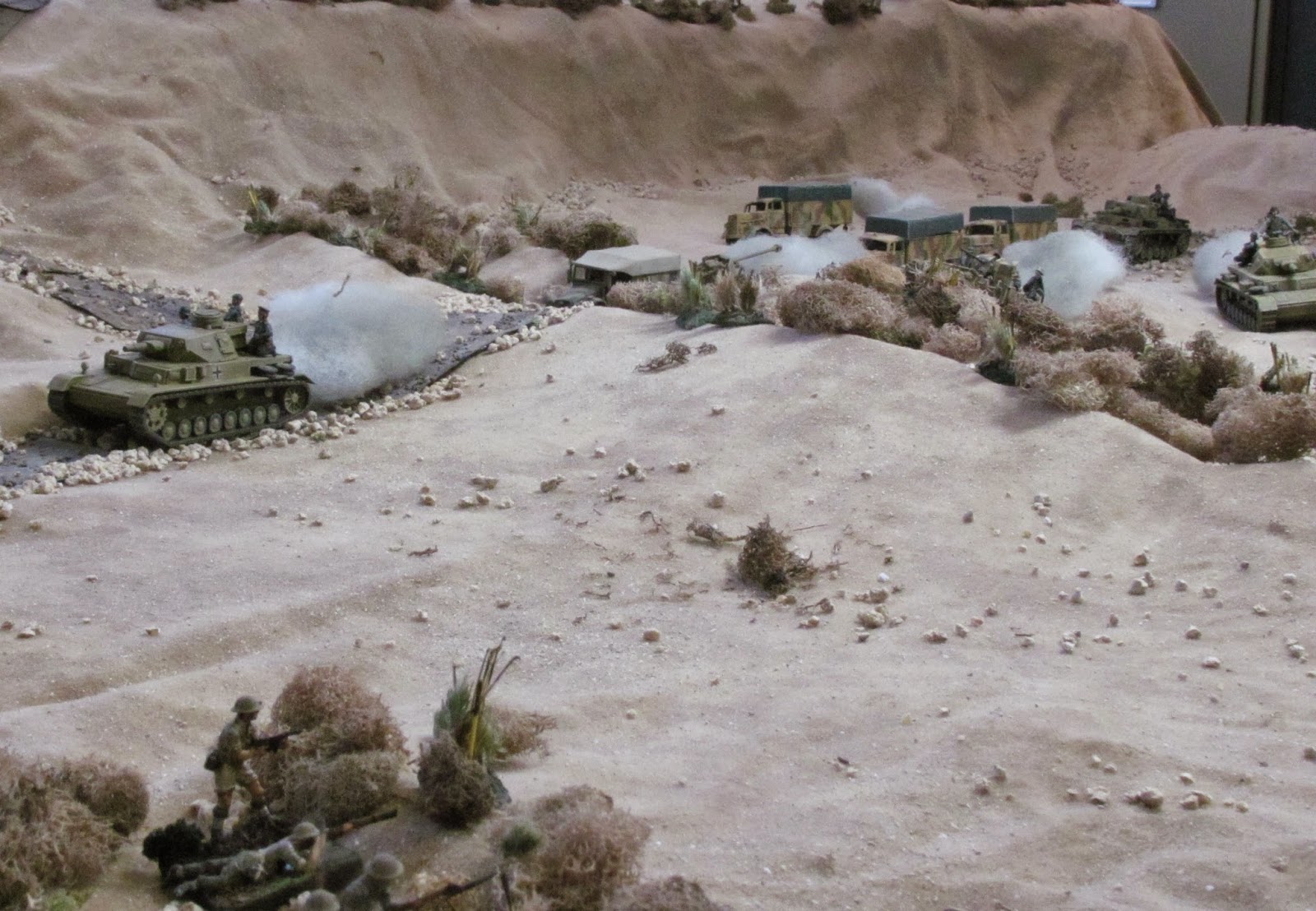 With the arrival of the armoured cars, the attackers suspect the fort is defended. The lead tank rolls forward, inviting enemy fire while the remainder of the column breaks from the road, spreading out to occupy a wadi that spans the road at right angles. In the foreground can be seen the Australian infantry, hunkered down in the smaller wadi close to the fort and still undetected. 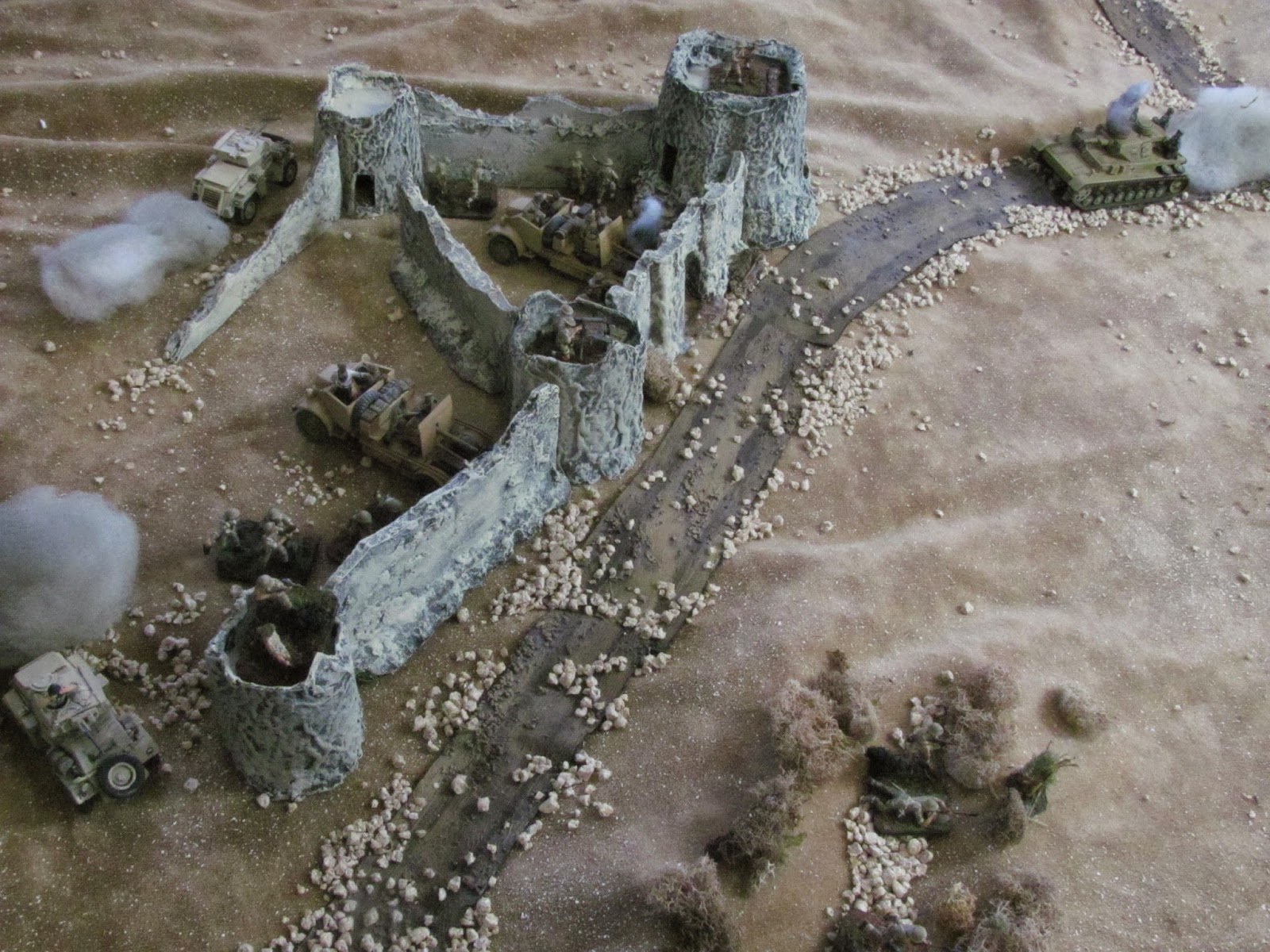 The portees open fire on the lead Panzer IV, suppressing it but doing no real damage. But the 2 pdrs.' locations are now marked… 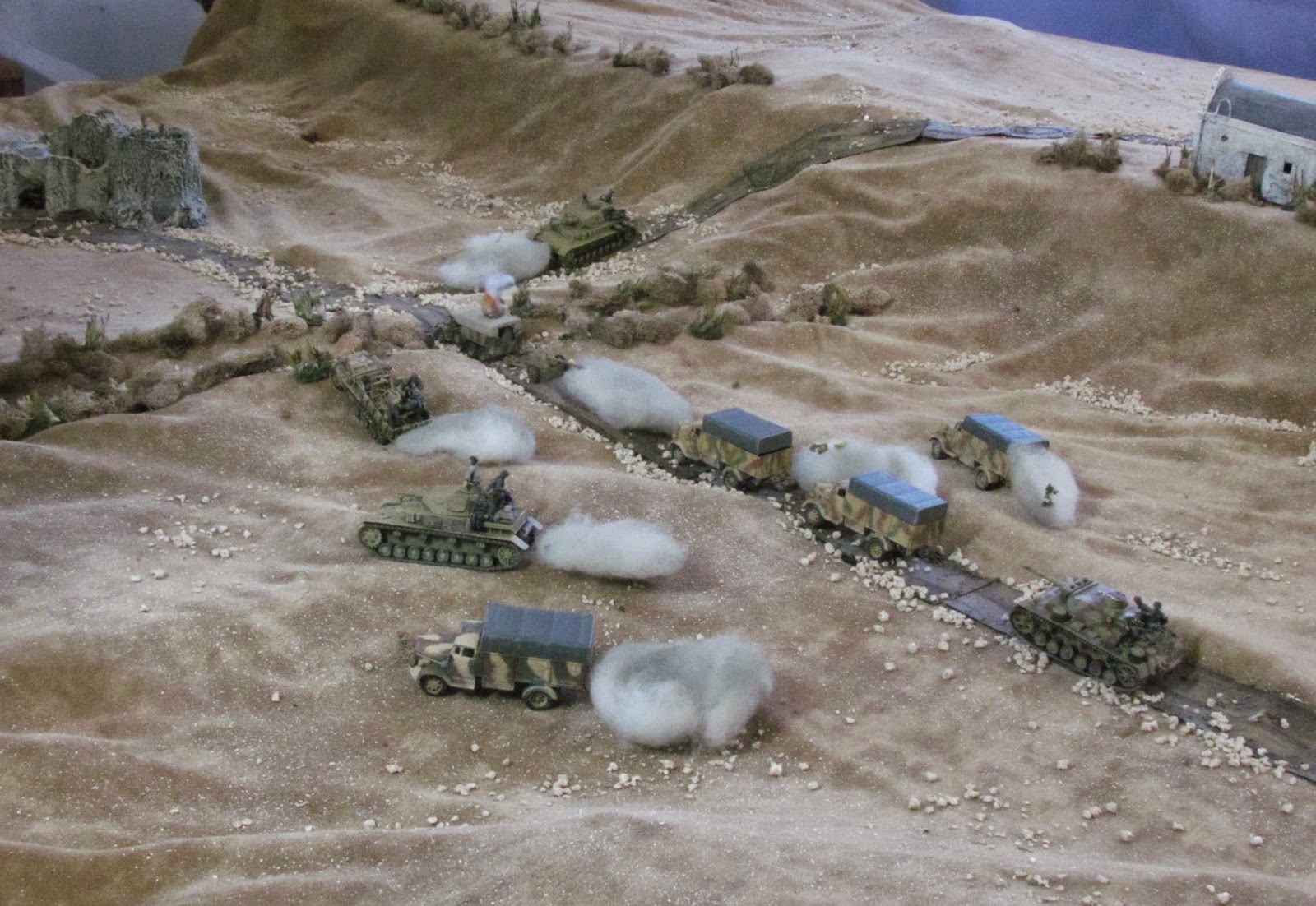 8. View of attack from German side

The German vehicles roll off the road and approach the wadi. Their AT gun takes some mortar fire where the road crosses the wadi, but soon recovers, with the crew unlimbering and hand hauling the gun into the wadi where it emplaces. In the background the lead Panzer IV withdraws from the fight, reversing towards the ridge. 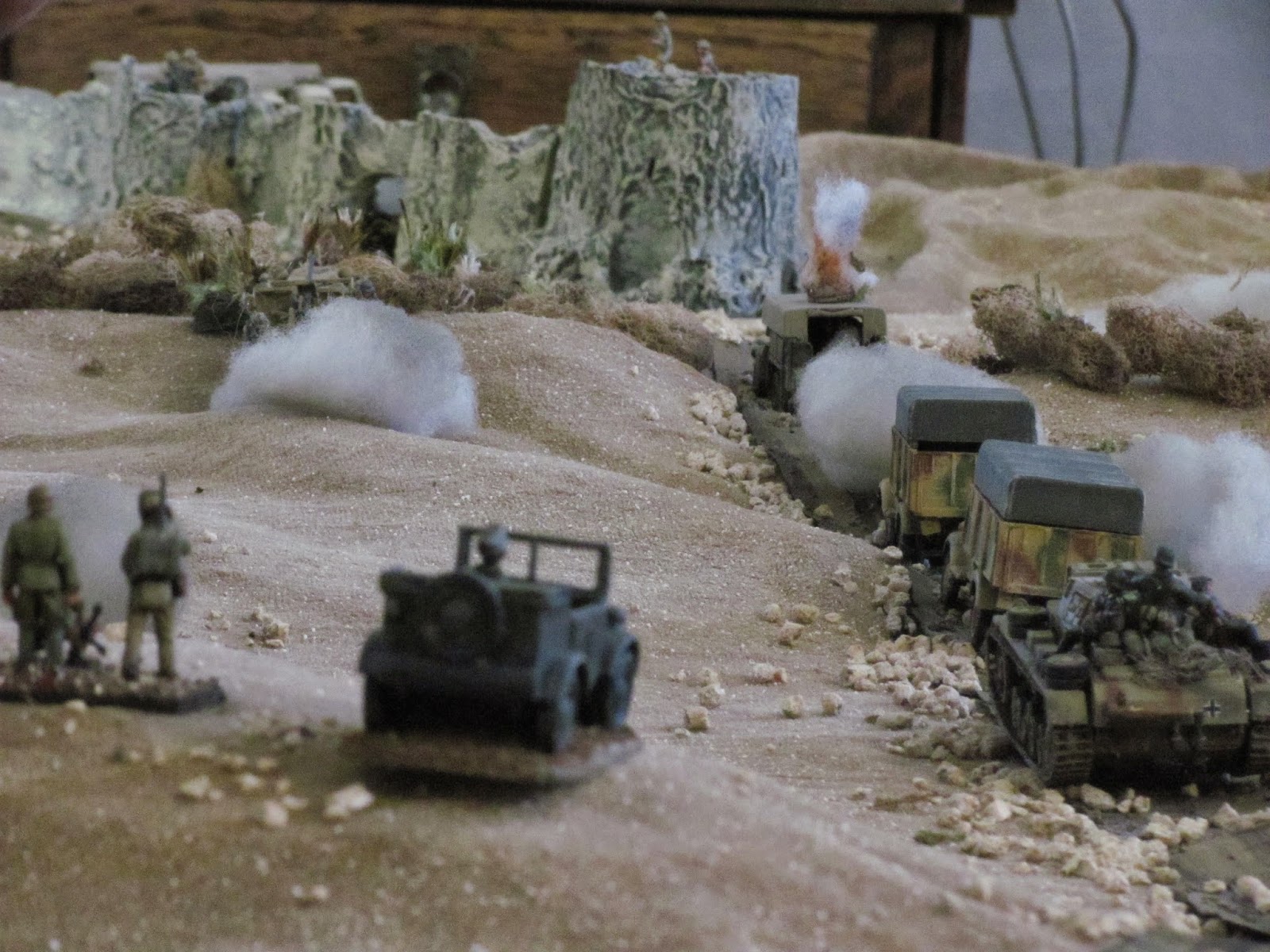 From his location on the crest of a low hill, the German battalion commander watches his troops move up the road towards the first wadi. The enemy portees positions' as they fire are marked by the commander, who passes on the information to the German 80mm mortars now emplaced behind the hill and ready to fire. Their first shoot knocks out one of the two portees. 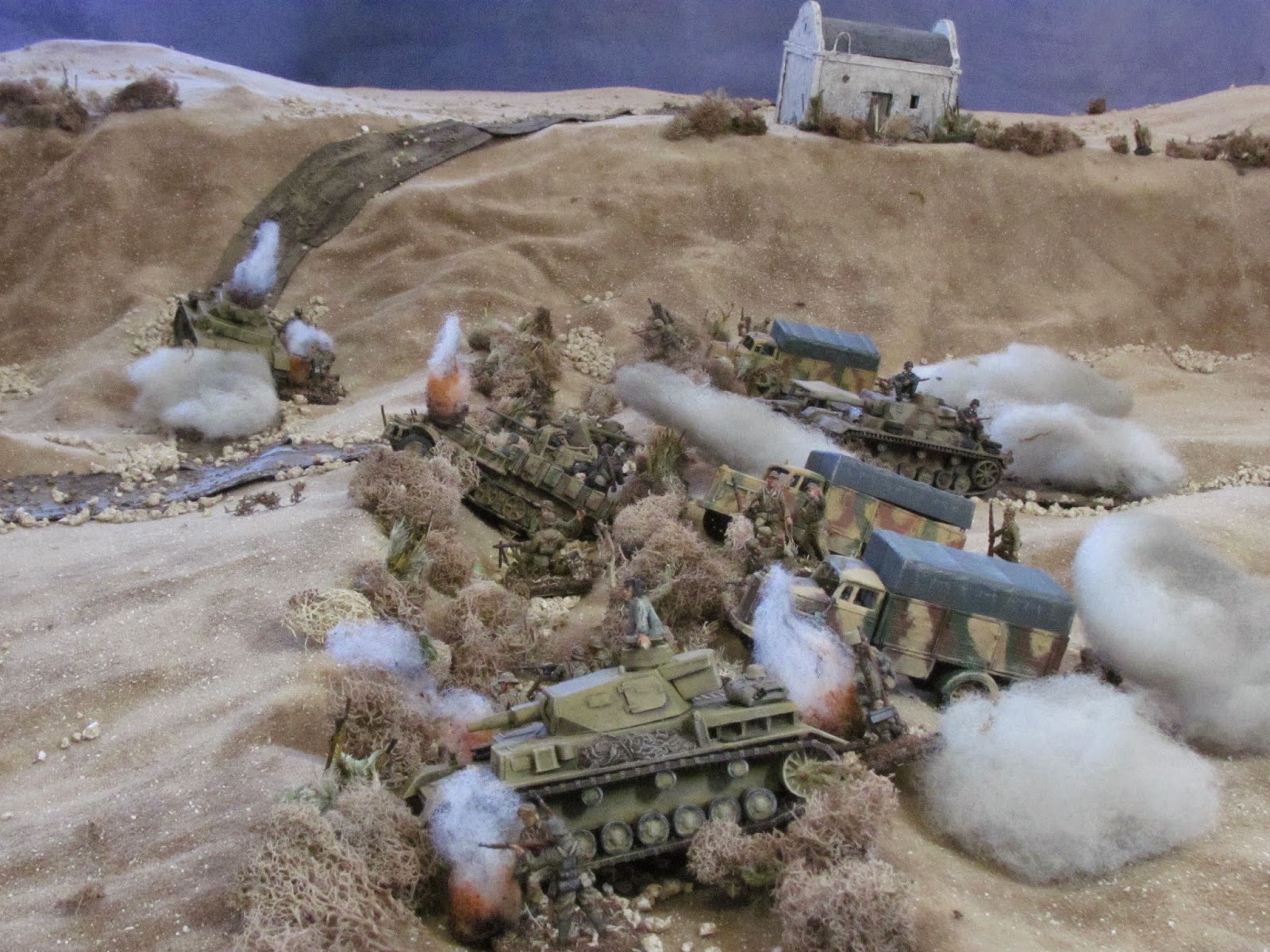 The Germans enter the wadi, with troops dismounting from their transport and taking up positions. 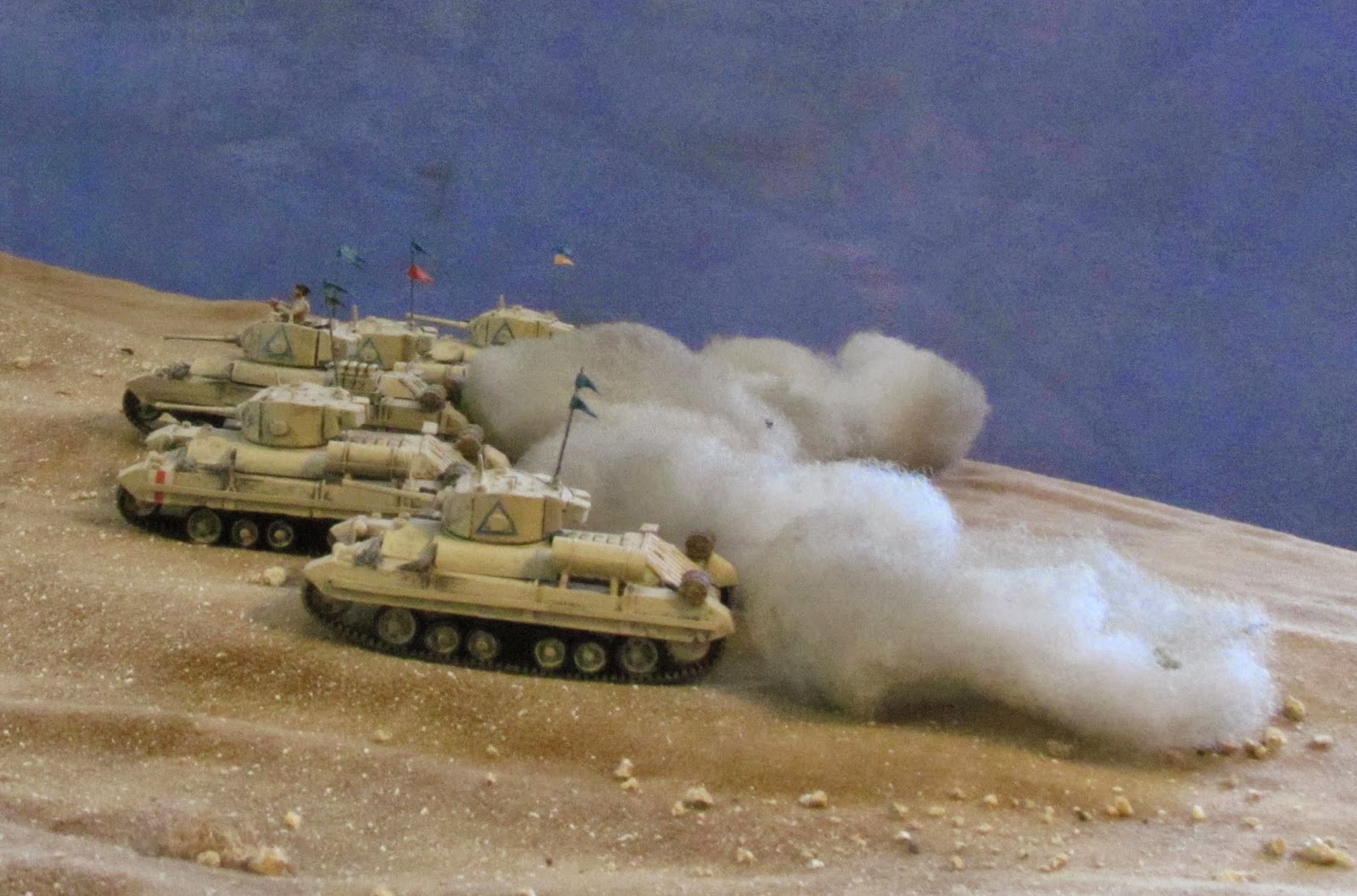 The British tanks finally arrive, at a time and place randomly generated. But their arrival is delayed considerably and their entry point ends up being at the corner of the battlefield furthest from the fight, both factors which will prove crucial to the outcome. 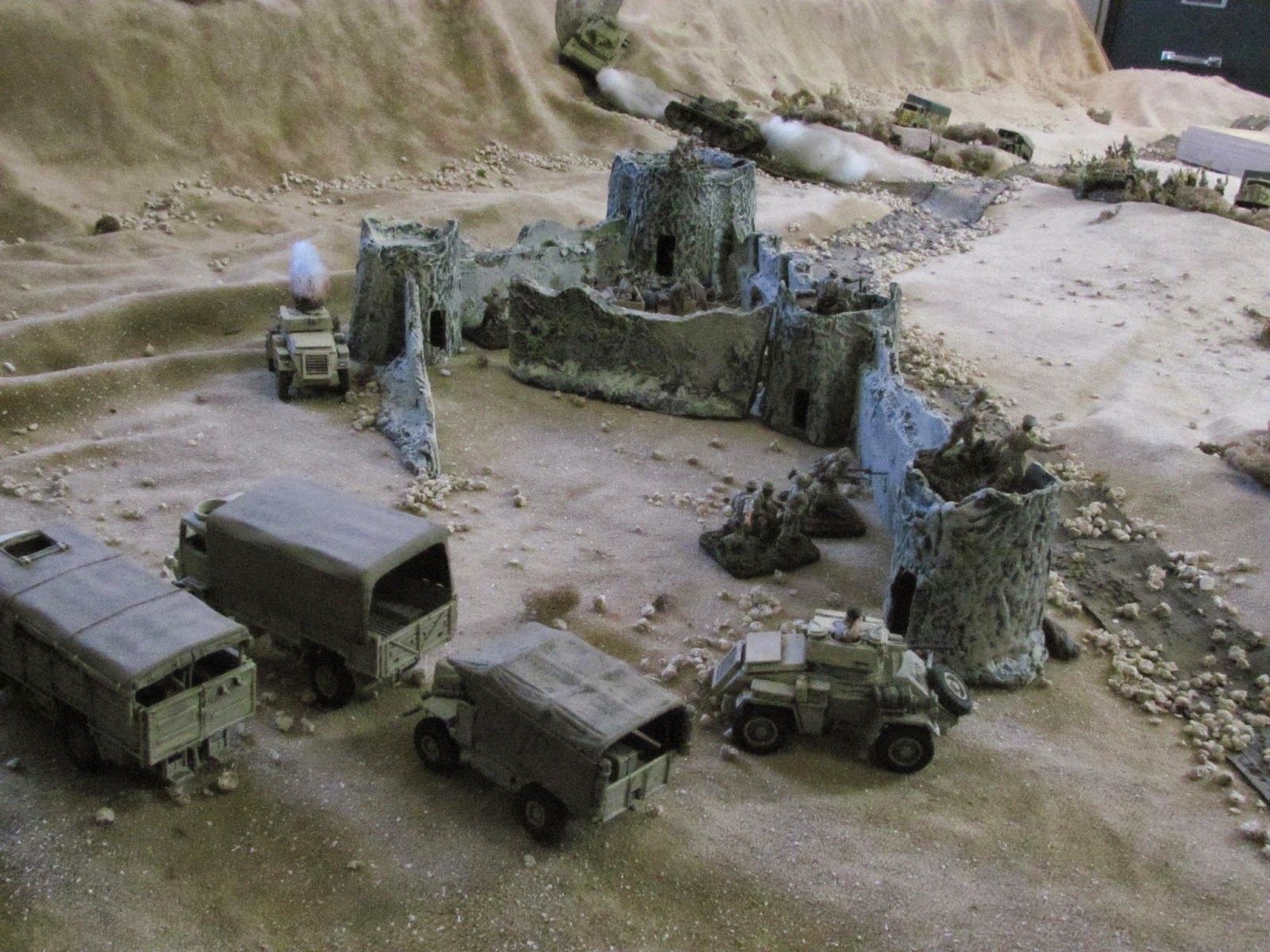 12. Waiting for the storm

Down one portee, the Australians nervously hunker down in their positions, desperately trying to improve them as best as possible before the enemy attacks. The armoured cars and remaining portee trade long distance shots with two of the German tanks, which are now making their way up the escarpment road. 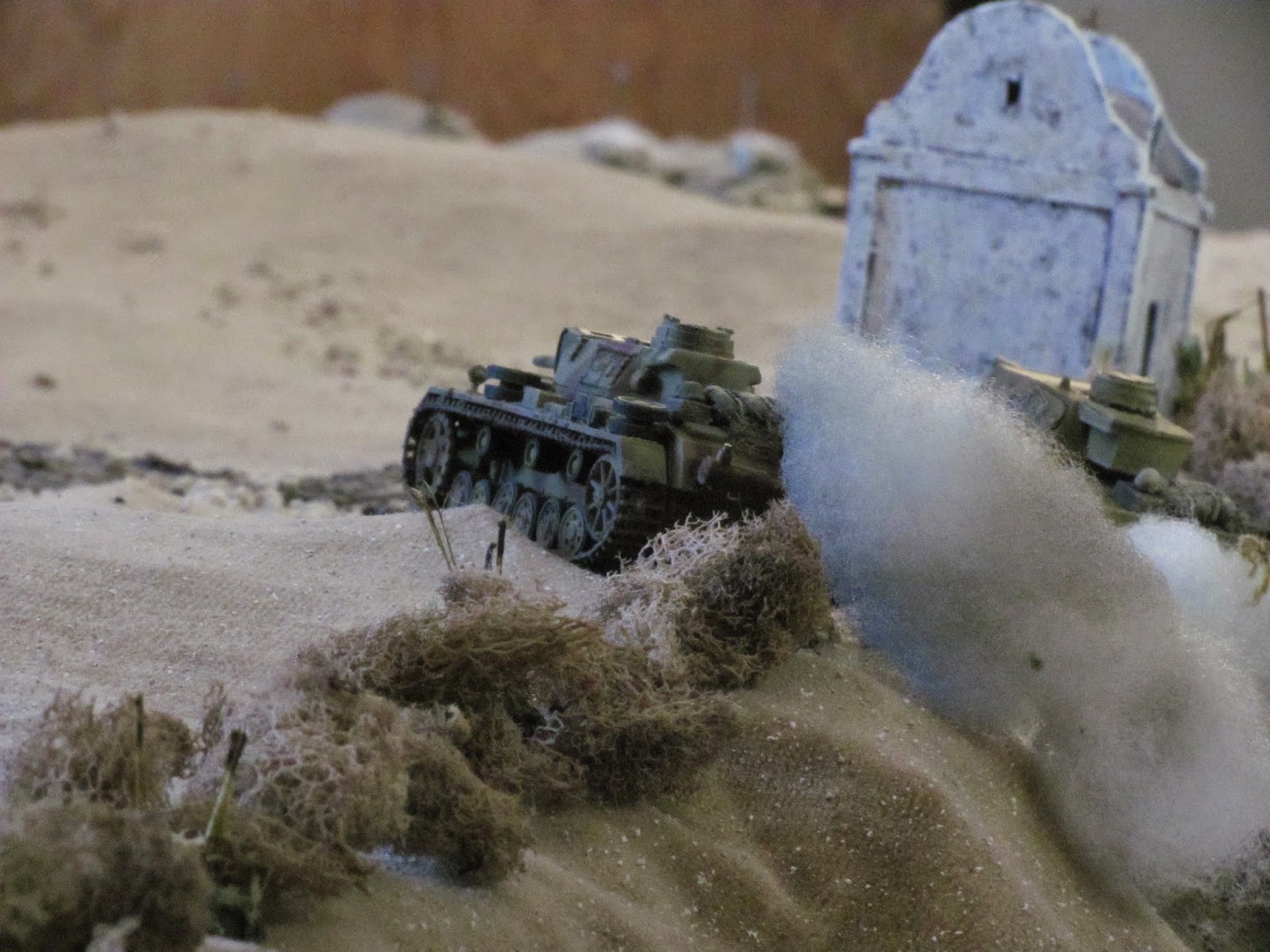 The German commander, having seen the British AC's descend from the escarpment and knowing enemy armour is prowling in the area, worries that there may be more and dispatches two of his tanks up to the top of the escarpment. A hill blocks the sight of the approaching Valentines, although their dust clouds can be seen as they approach. 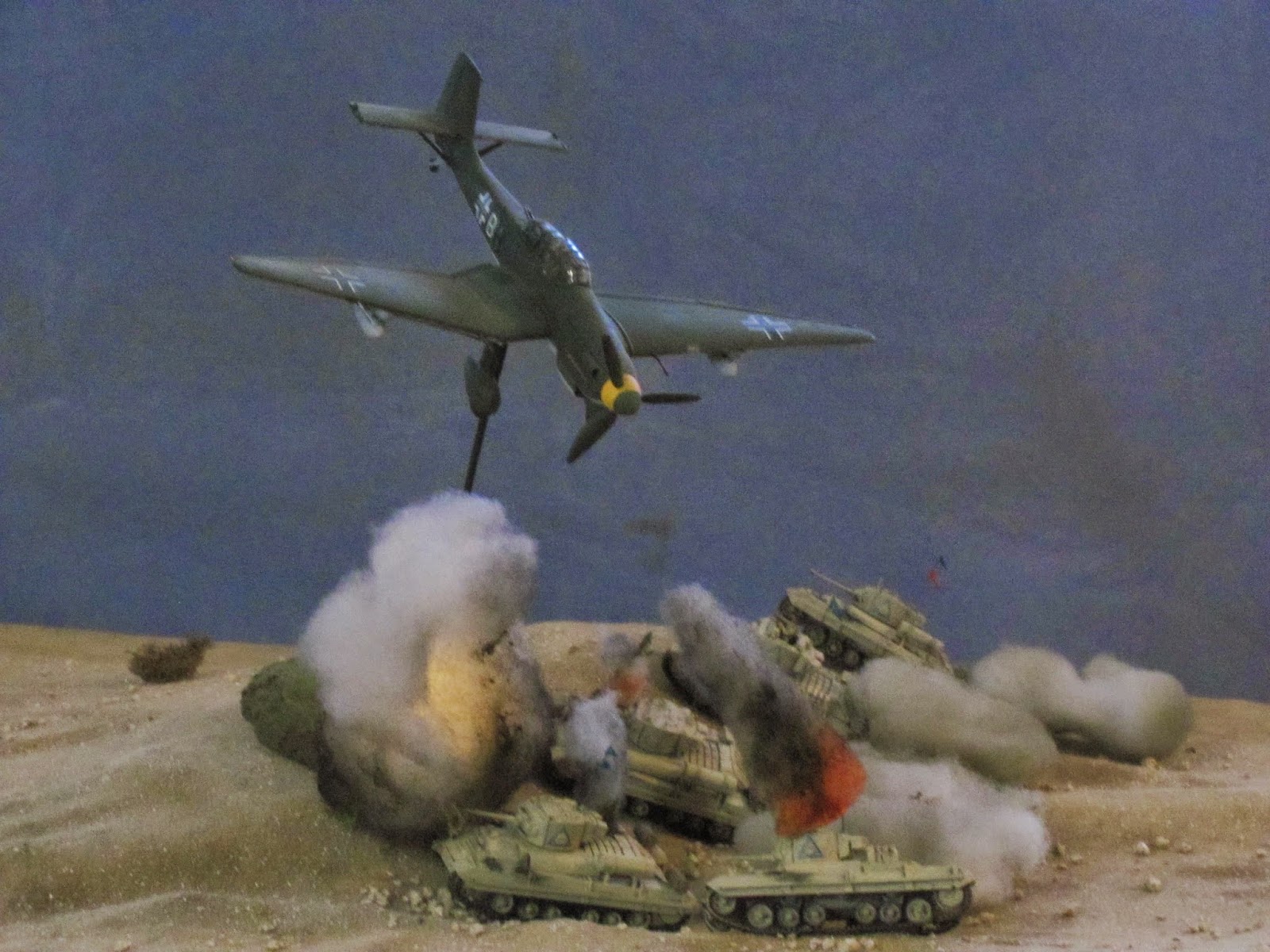 Before the Valentines even come within sight of the enemy a Stuka sweeps out of nowhere (a 10% chance for random air support per turn for each side), catching the tanks in close formation and knocking out one while disordering and suppressing two others. 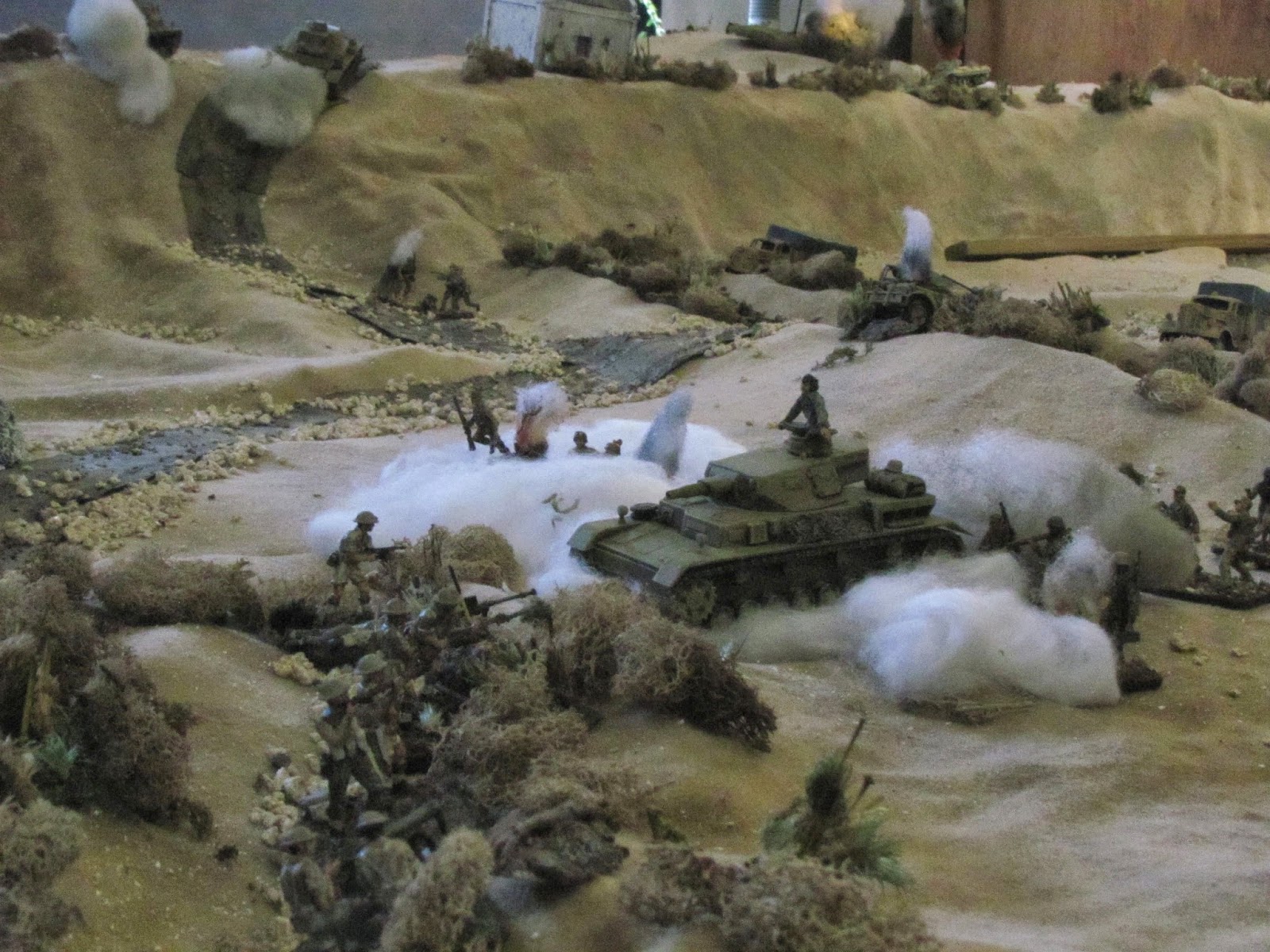 While this drama unfolds on the ridge, the German commander sends in his attack. Under cover of smoke the troops and tank cover the open ground between their wadi and the fort, concentrating first on ousting the defenders from the wadi on the Australians' right flank. 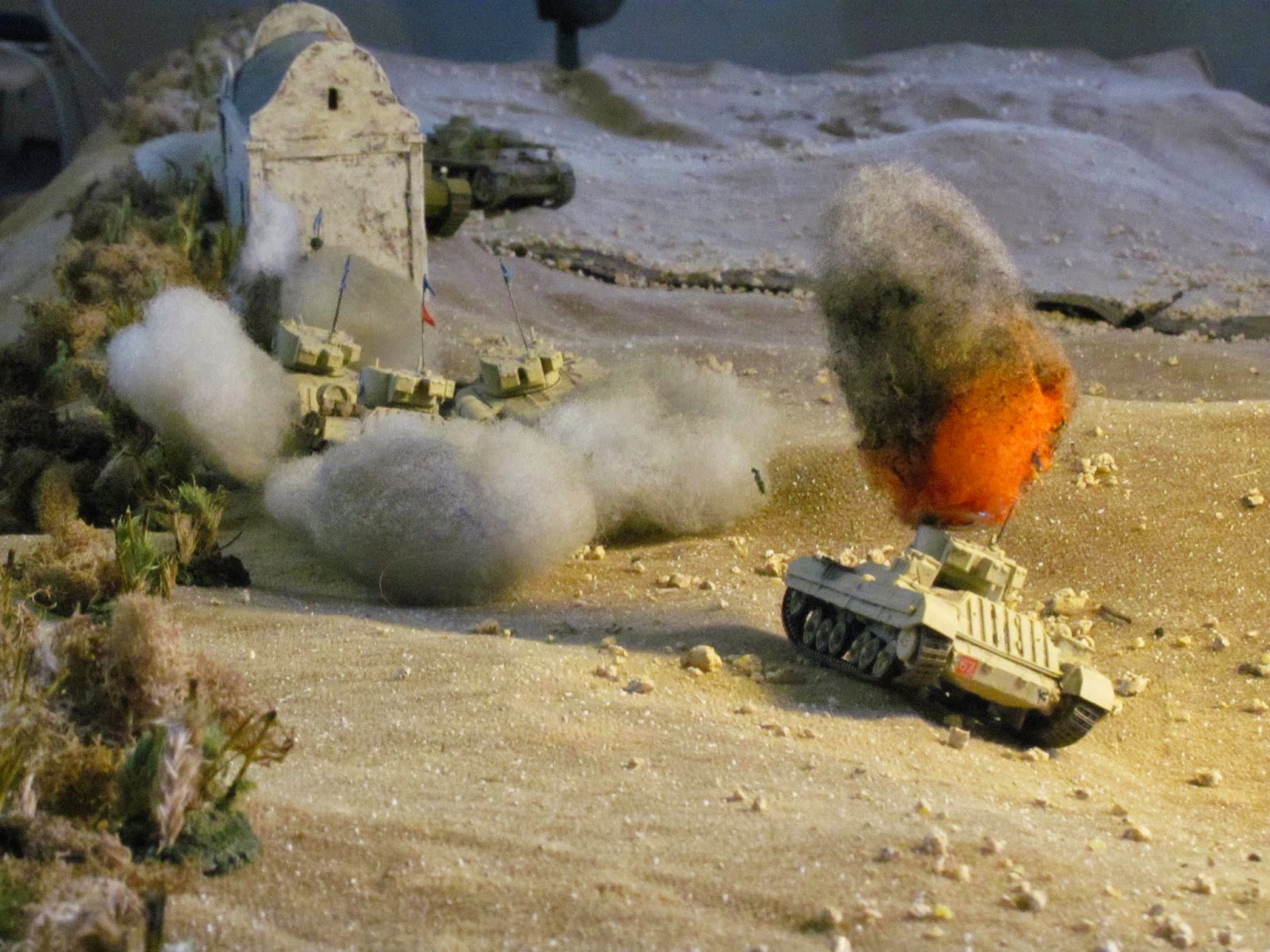 Leaving one tank burning behind the hill, the remaining tanks attempt to close the distance between themselves and the enemy armour in order to get within effective range of their 2 pdrs. 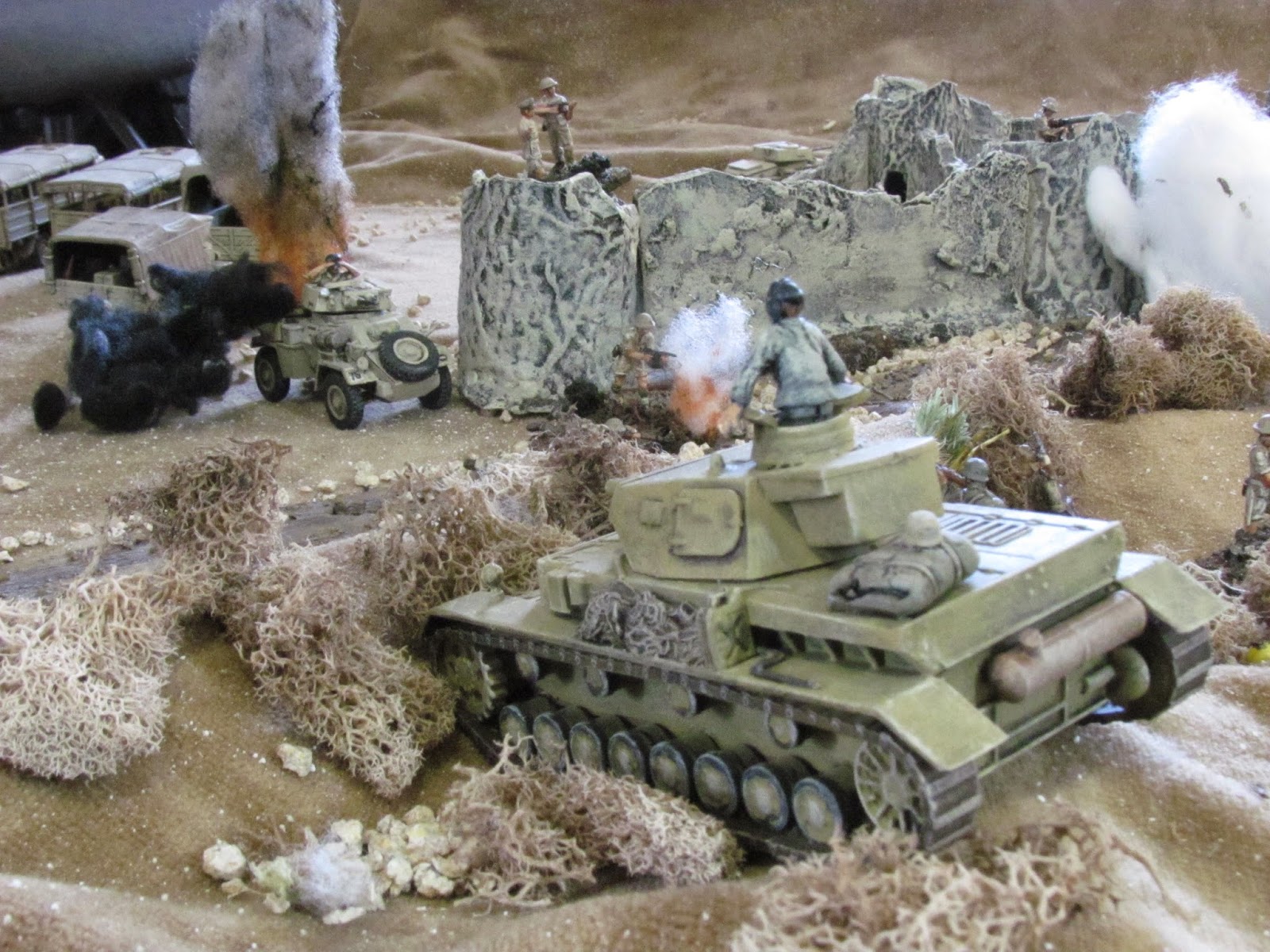 The Germans take some casualties, but manage to oust most of the defenders from their positions in the wadi. One of the Humbers falls to fire from the Pz. IV. 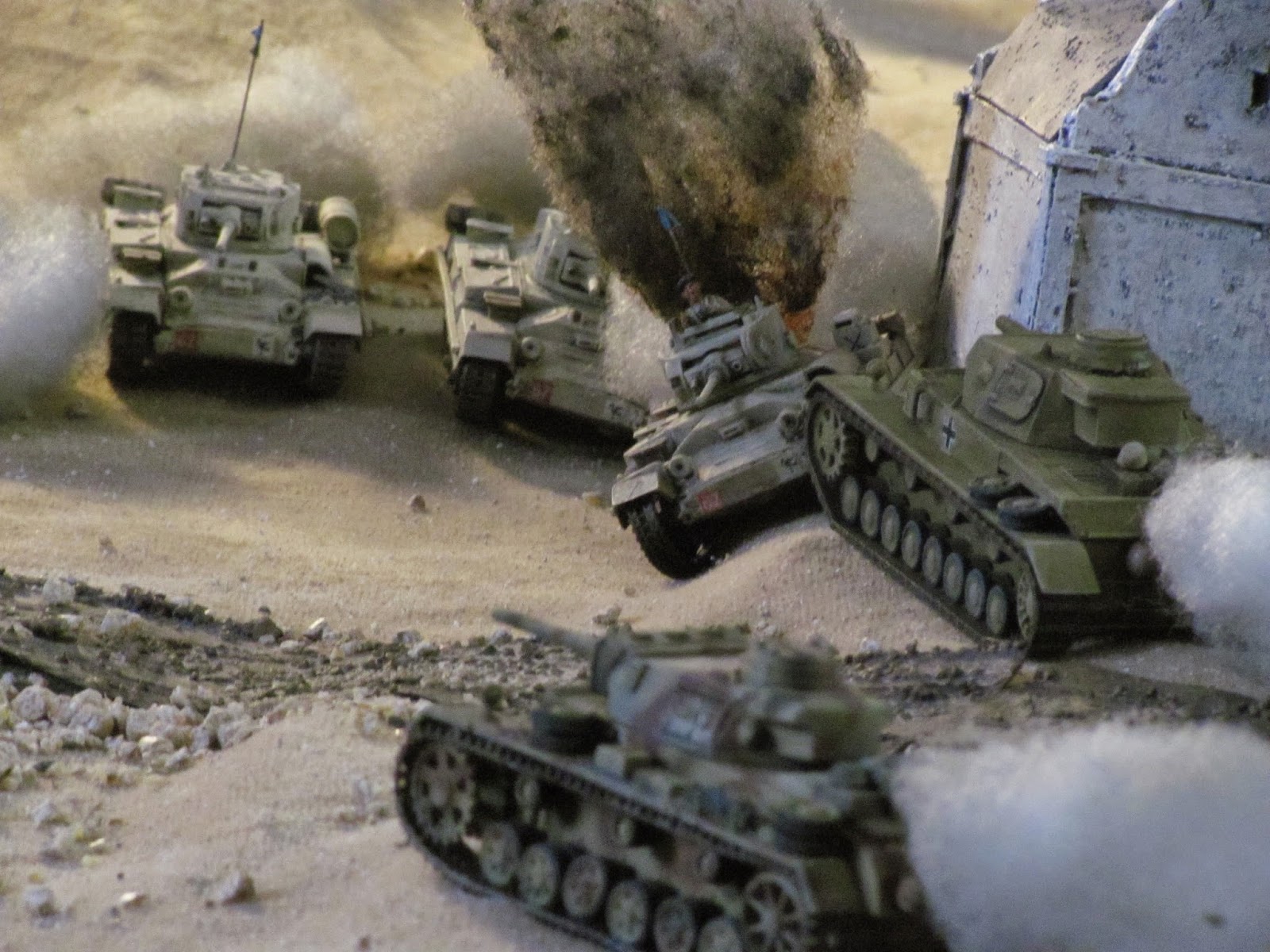 With time running out and in a desperate attempt at close assault with his tanks, the command Valentine is knocked out and a second driven back. Shortly afterwards a third is destroyed and this part of the battle is over, with the two British tanks left withdrawing. With the German tanks prepared and in position at the top of the ridge when the enemy arrived, and a lot of ground to cover in order to close, the British armour had little chance of success. 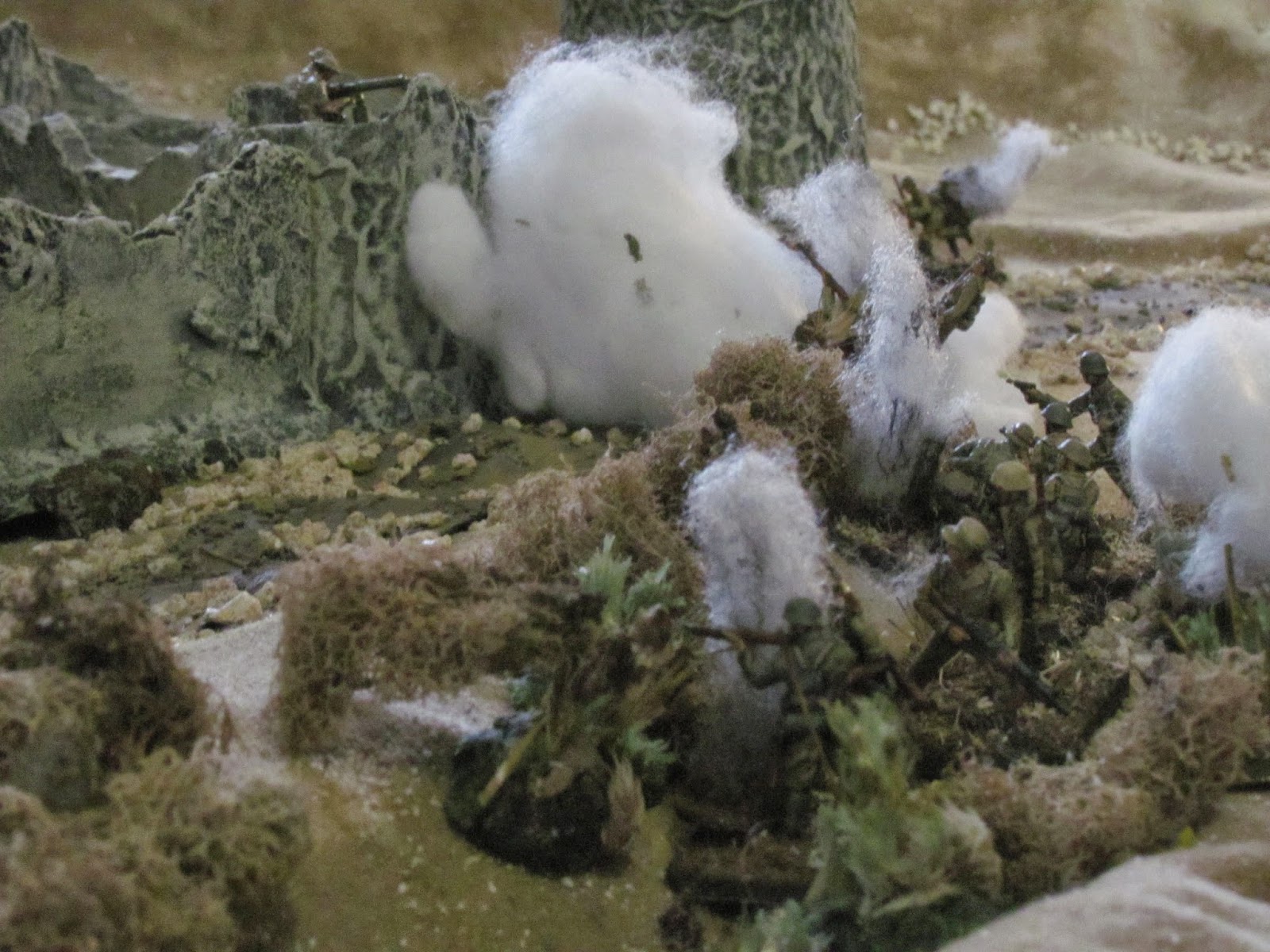 Things are going no better for the Allies below the escarpment. The wadi falls to the enemy completely, and the Germans establish a fire base here as a second attack goes in (background) under cover of more smoke. The walls of the fort are breached in close combat and some the Germans now enter the fort. 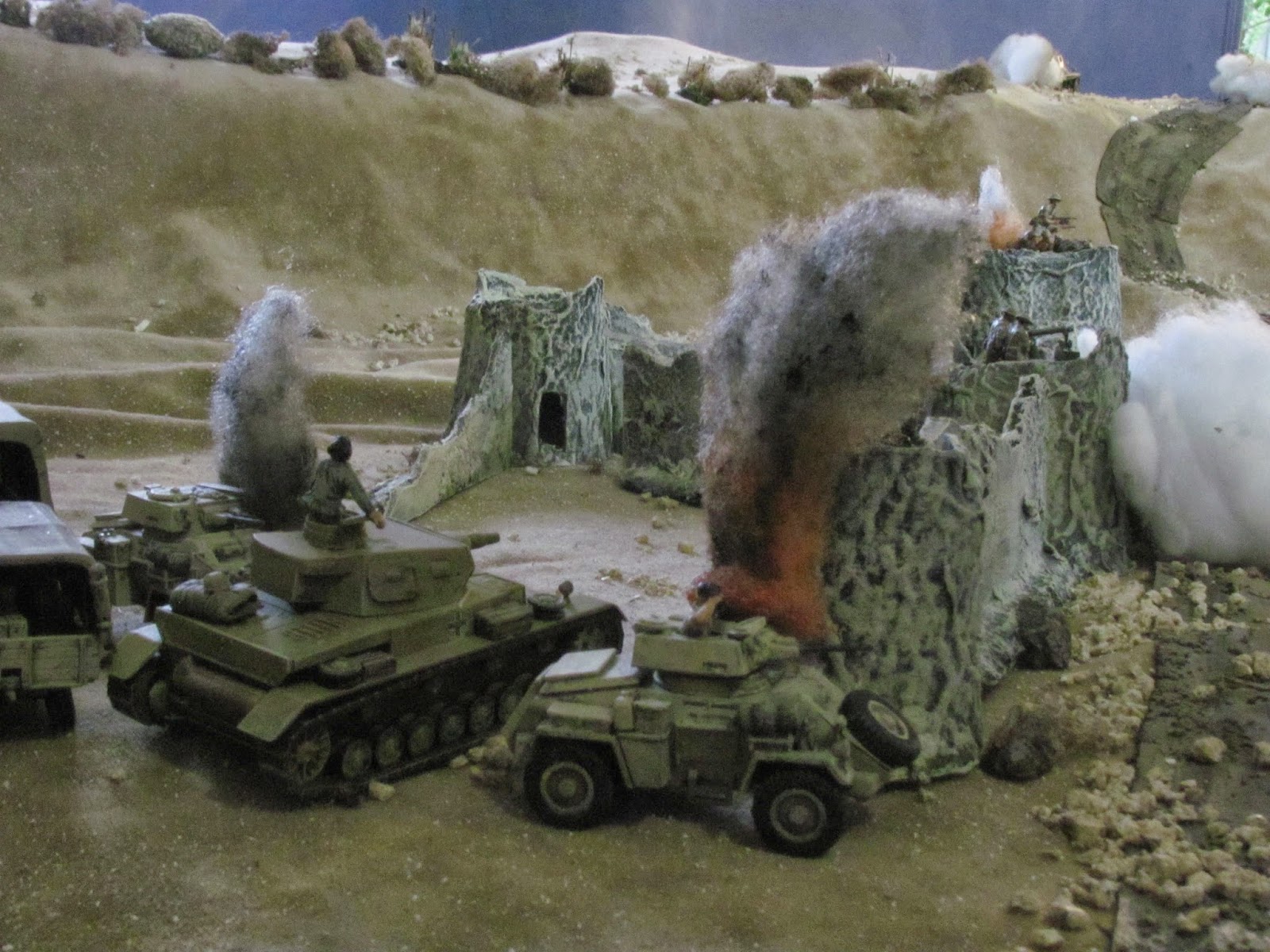 20. Cat among the pigeons

The Panzer IV rolls around into the unwalled back of the fort, knocks out a second Humber during a failed and Quixotic close assault and is in among an enemy with no capacity left to defend itself. The Australian commander, with less than half his troops left, a tank in his backyard, enemy soldiers within the walls and all help of succour brewed up on the escarpment, tosses in the towel and surrenders.