We replayed one of the Battlefront WWII chestnuts last weekend, the Dom Butgenbach scenario written by Steve Uden, which takes place during the Battle of the Bulge. It is billed as a "generic scenario", representing the few days' intense fighting that went on in that area in the German attempt to win through on the Billingen-Butgenbach road. It pits a veteran battalion of panzergrenadiers supported by armour against the trained troops of the American 2nd Battalion, 26th Infantry Regiment. The Americans have some armour and AT support but the heavy hitters are two entire battalions of 105's in artillery support.
The German objective is to clear the Billingen-Butgenbach road, leaving no enemy within 10" either side, while the Americans need to hold on and suffer as few casualties as possible in the process. The game went on for 10 of 12 turns, called at the beginning of the 11th as there was no chance of a German victory. 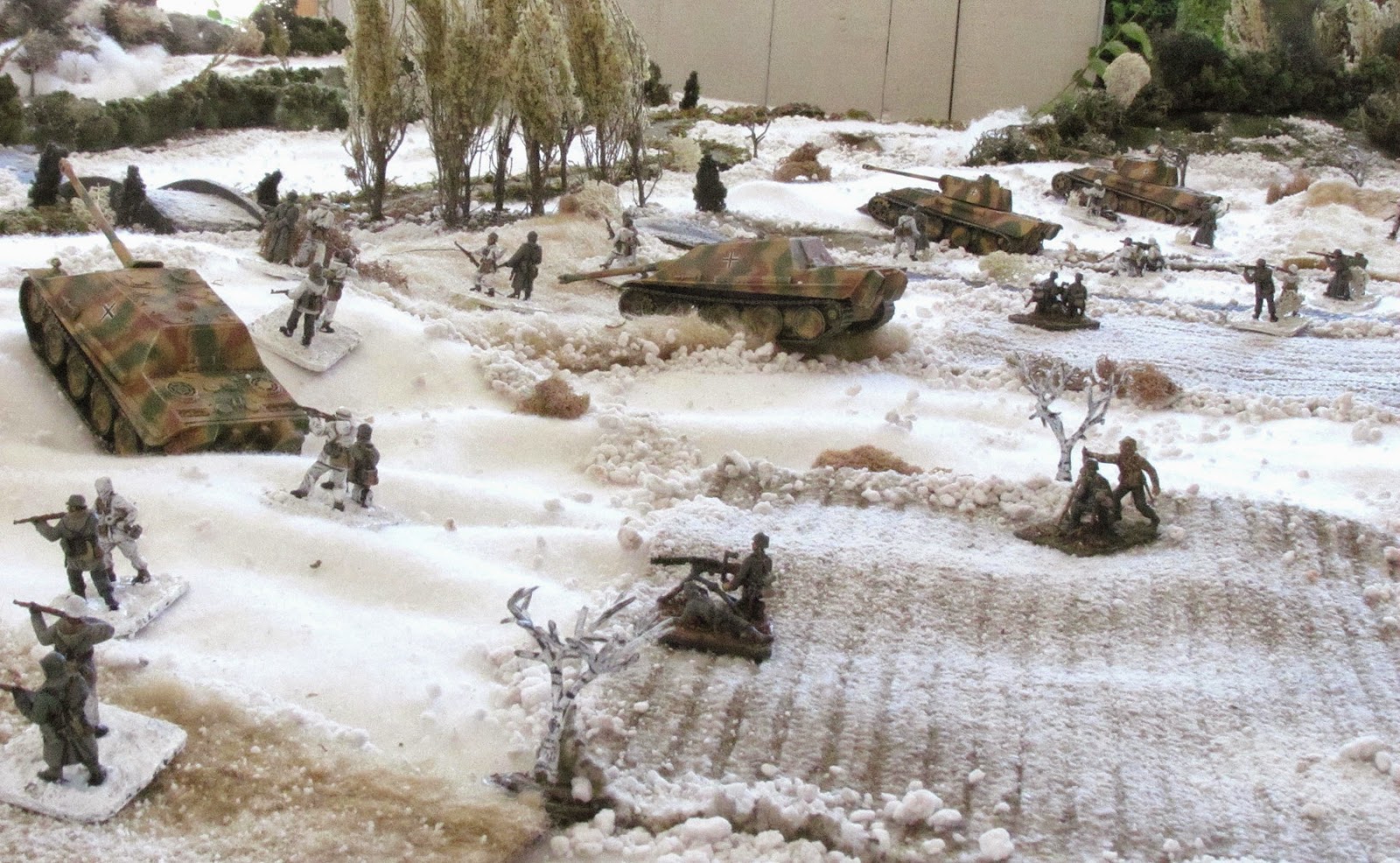 A battalion of German panzergrenadiers, supported by Panthers and Jagdpanthers of the 12th SS Division move across the open ground behind a ridge that lies before the objective. Artillery fire from two battalions of American 105's inflicts only minor casualties due to the Germans' spread out advance. 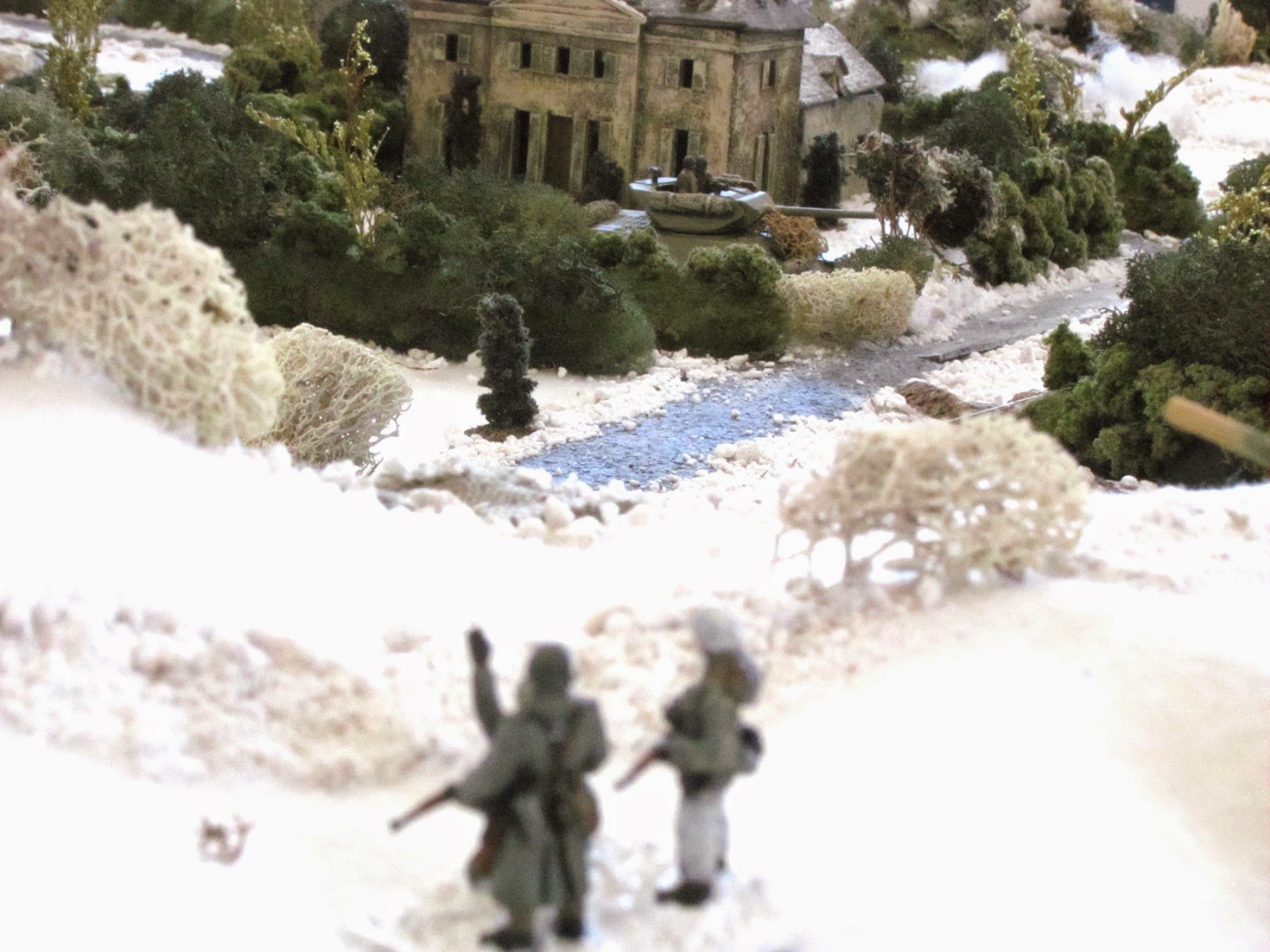 One of two M10 tank destroyers lying hull down behind the hedge bordering the manor grounds is spotted by the German battalion commander, who cautiously moves undetected up onto the high ground south of Dom Butgenbach. 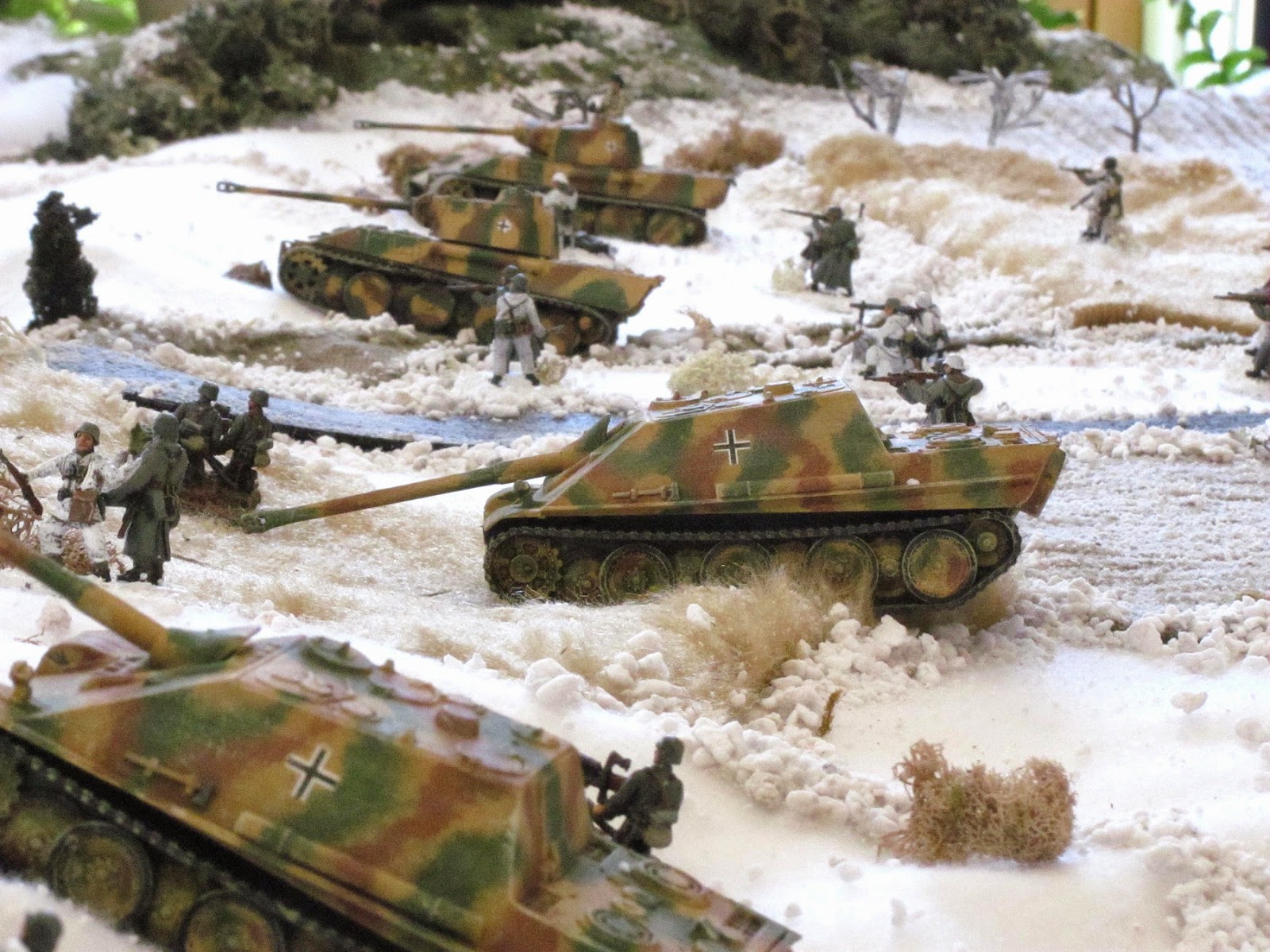 Although the American FOO's are able to see the enemy from their elevated locations the ridge still blocks the Germans from detection by most of the enemy as they form up for their attack. 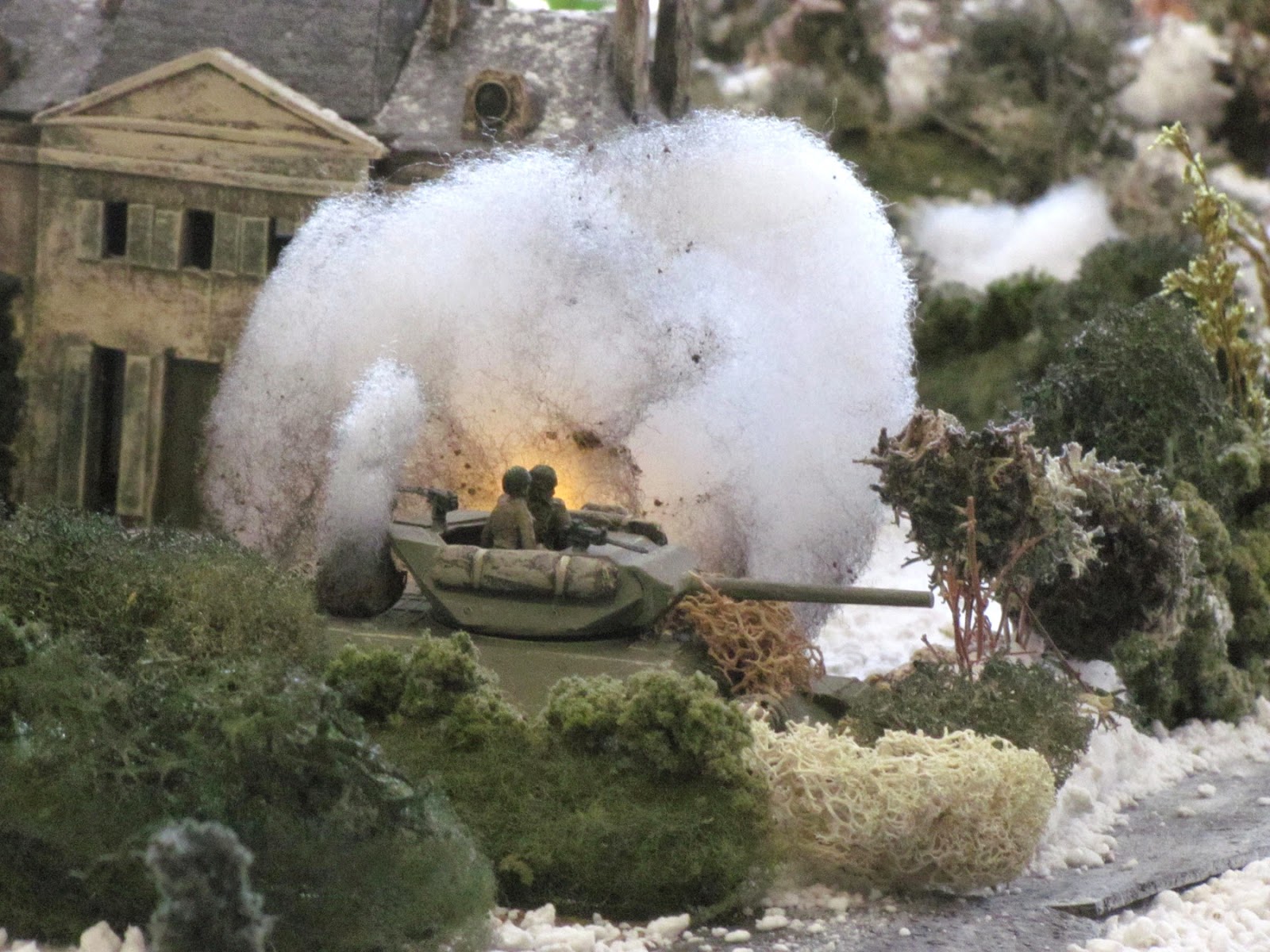 120mm mortar fire called in by the German commander crashes down on the spotted M10. 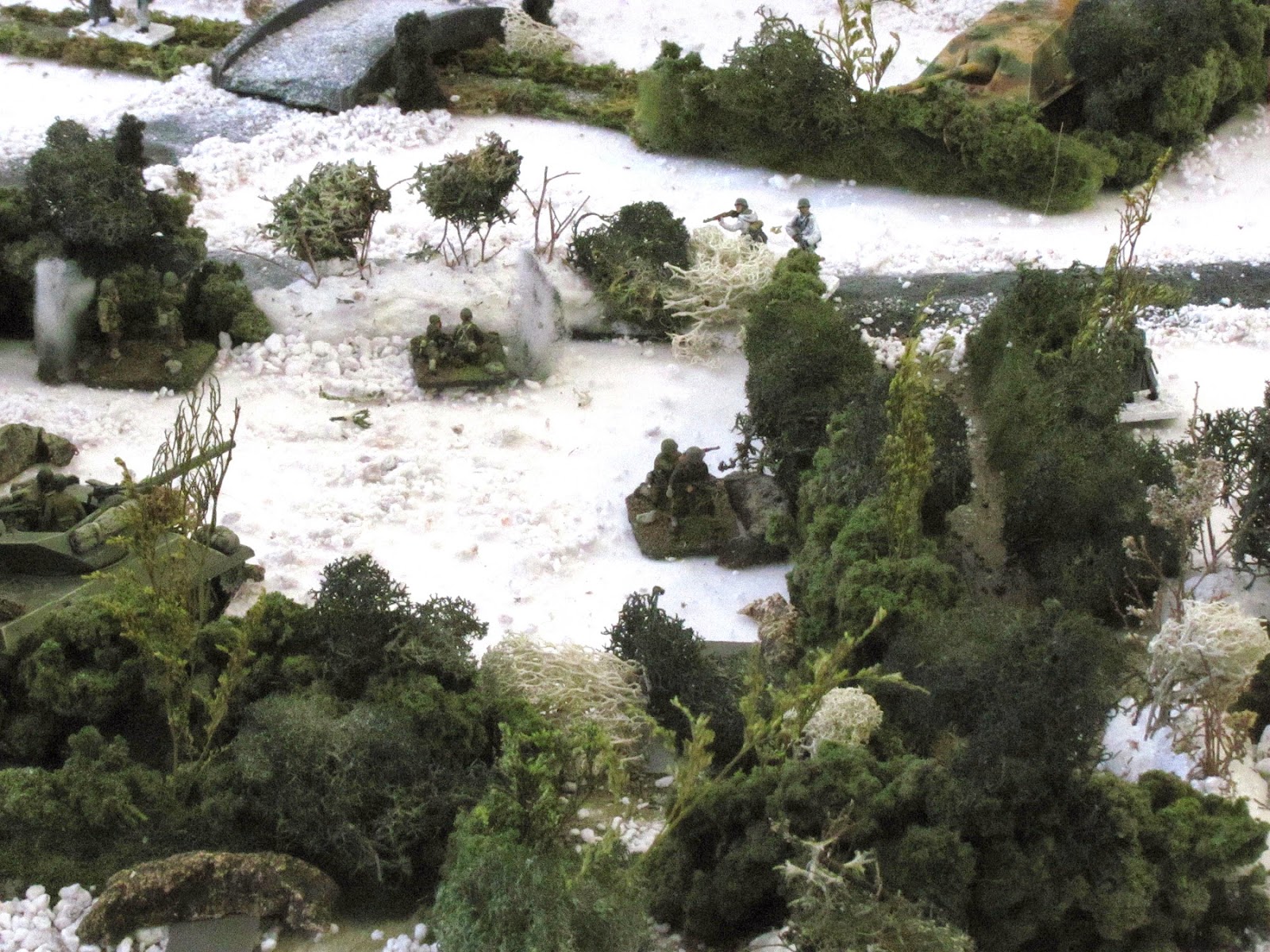 5. Driving the defenders off their front line

The first German infantry break cover and storm the manor grounds, driving the American troops off their front line (top), while the M10's, after firing once, pull back deeper into the manor grounds to avoid return fire from the much superior German armour. 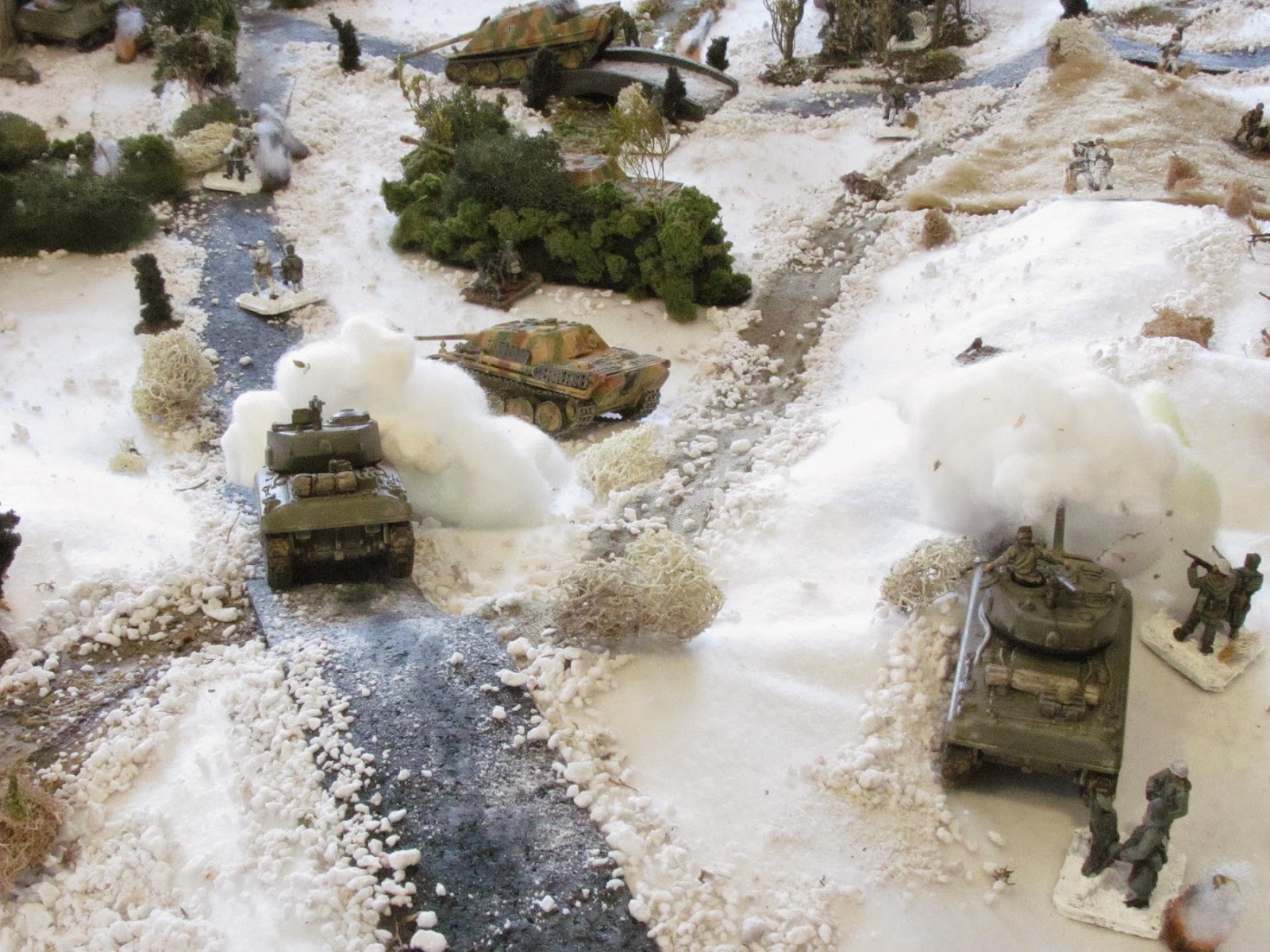 With all of the German armour committed forward, two American Shermans race up the back side of the high ground south of the manor, overrunning the German commander on the hillltop and engaging the turretless Jagdpanthers from their vulnerable rear. They are immediately smoked by German mortars, in an attempt to buy time for the German armour to get turned around. 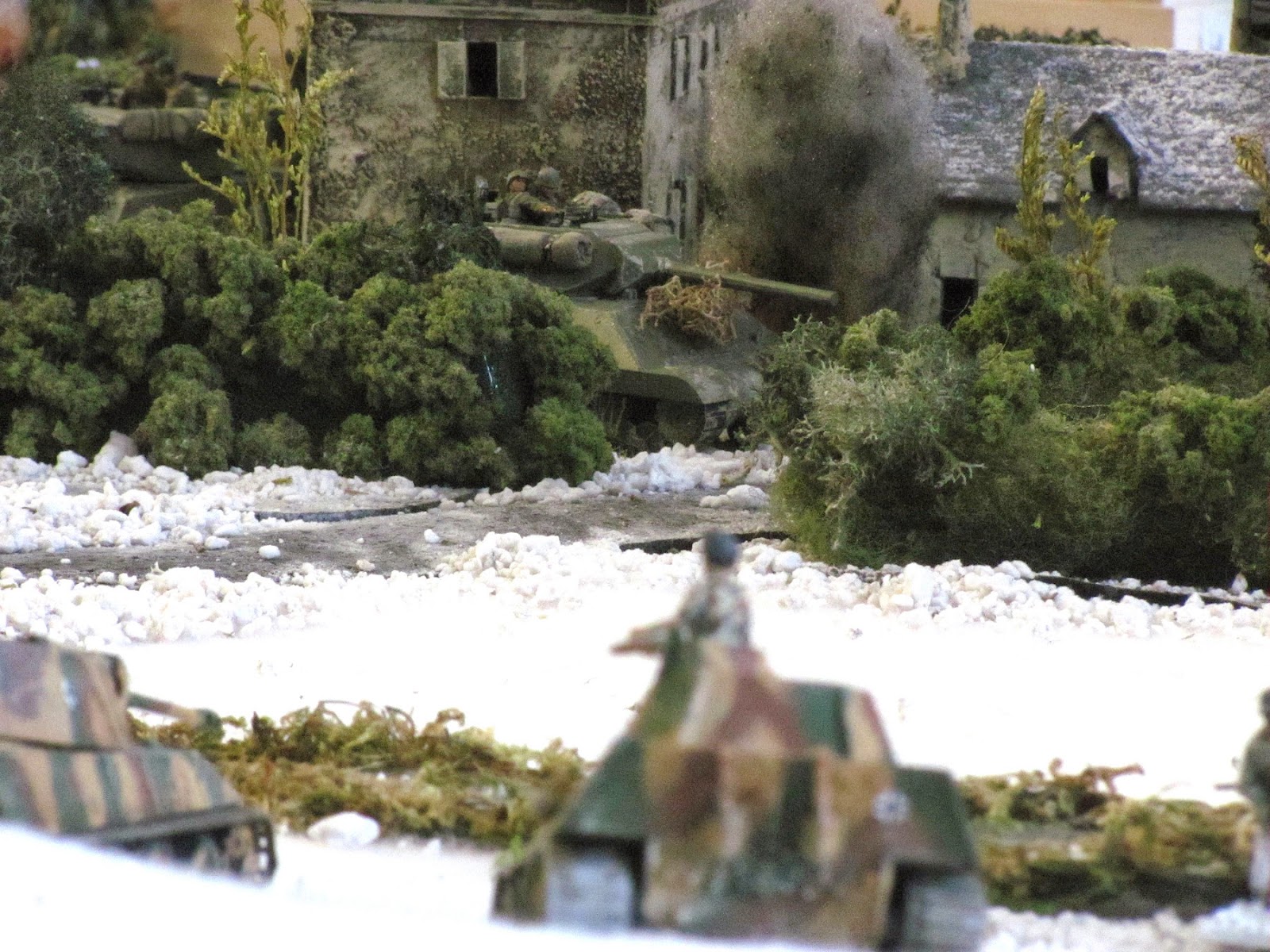 One of the M10's, poking its nose out in the hope of bagging a Panther that has been disordered by artillery, is knocked out when it fails to scoot back to safety quickly enough.

One of the Shermans which has moved into enfilade is taken out by close combat with German infantry, which also perishes in the attack, making it two American tanks down. But the Jagdpanthers have already broken off their attack to turn and meet this threat, just in time to see the second Sherman withdraw back over the ridge and out of sight. 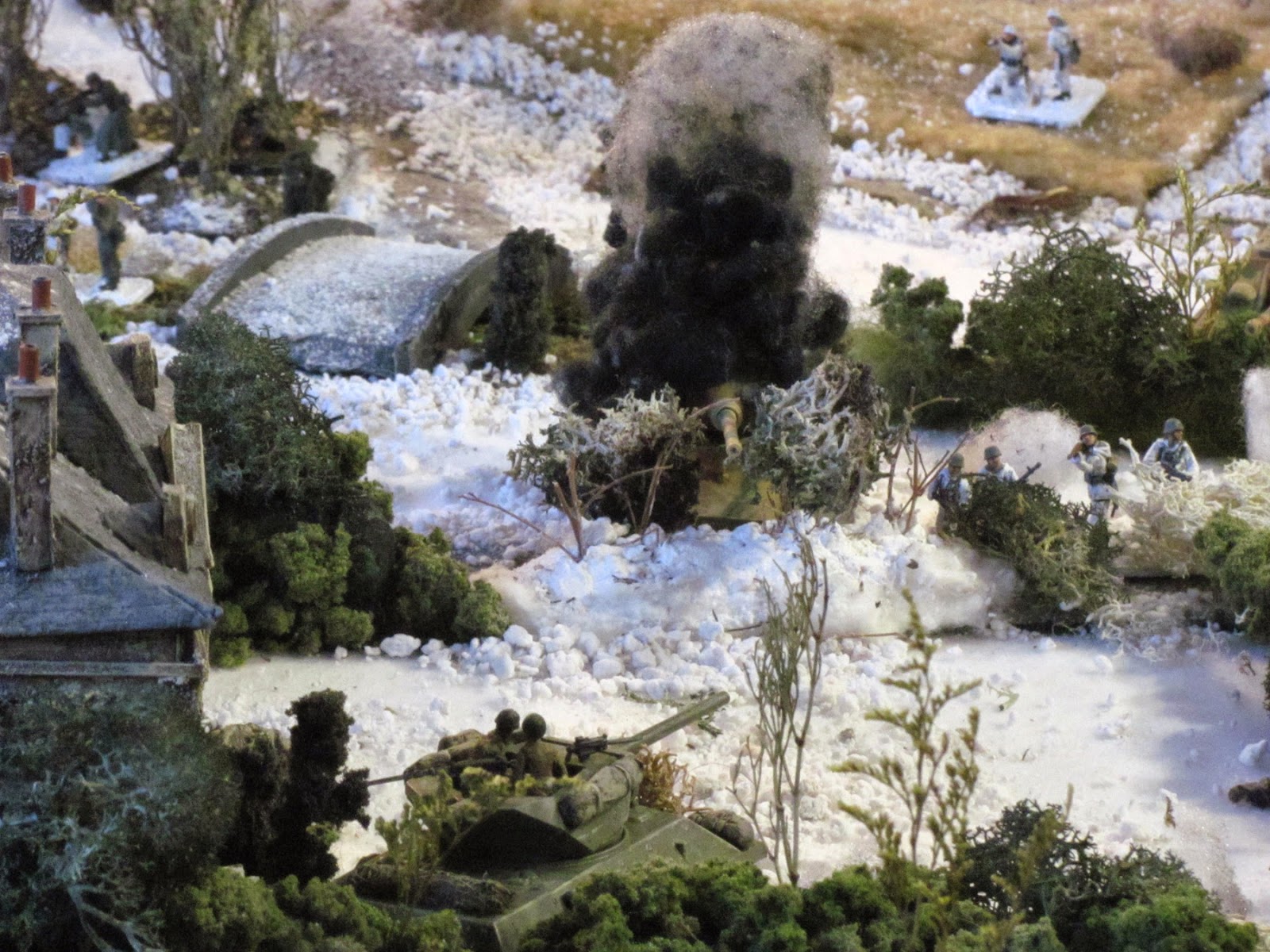 The Americans bag their first German cat with a one two punch by the M10 and 57mm AT gun, as the beast pokes its nose into the hedgerow surrounding the manor grounds. 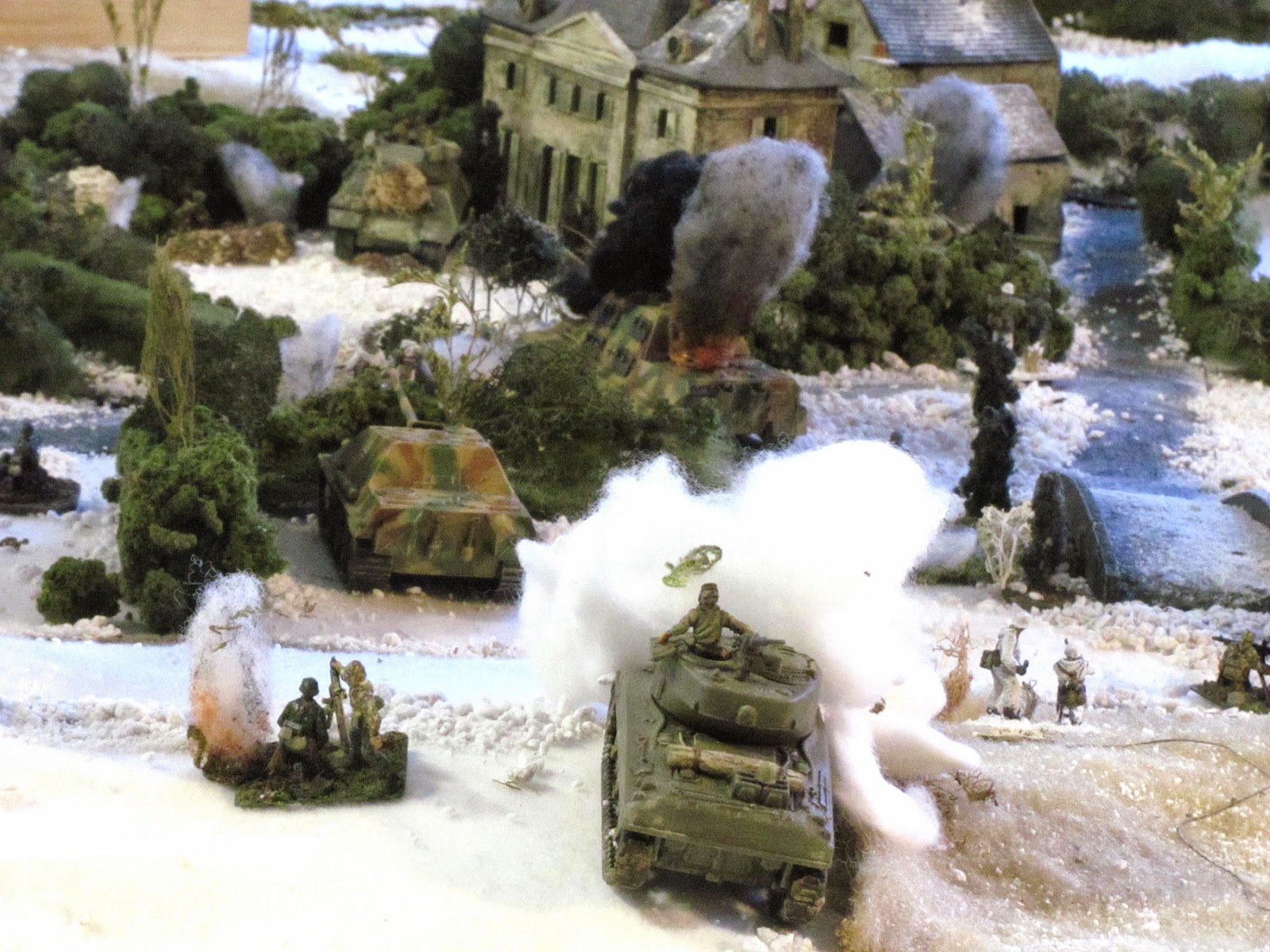 Just as the remaining German Jagdpanthers get turned around again towards the manor, the second Sherman once more pops its nose over the ridge in enfilade. Again it is smoked, but its presence is enough to distract the Jagdpanthers from the attack for a second time. (German mortar team - "Is that one ours?") 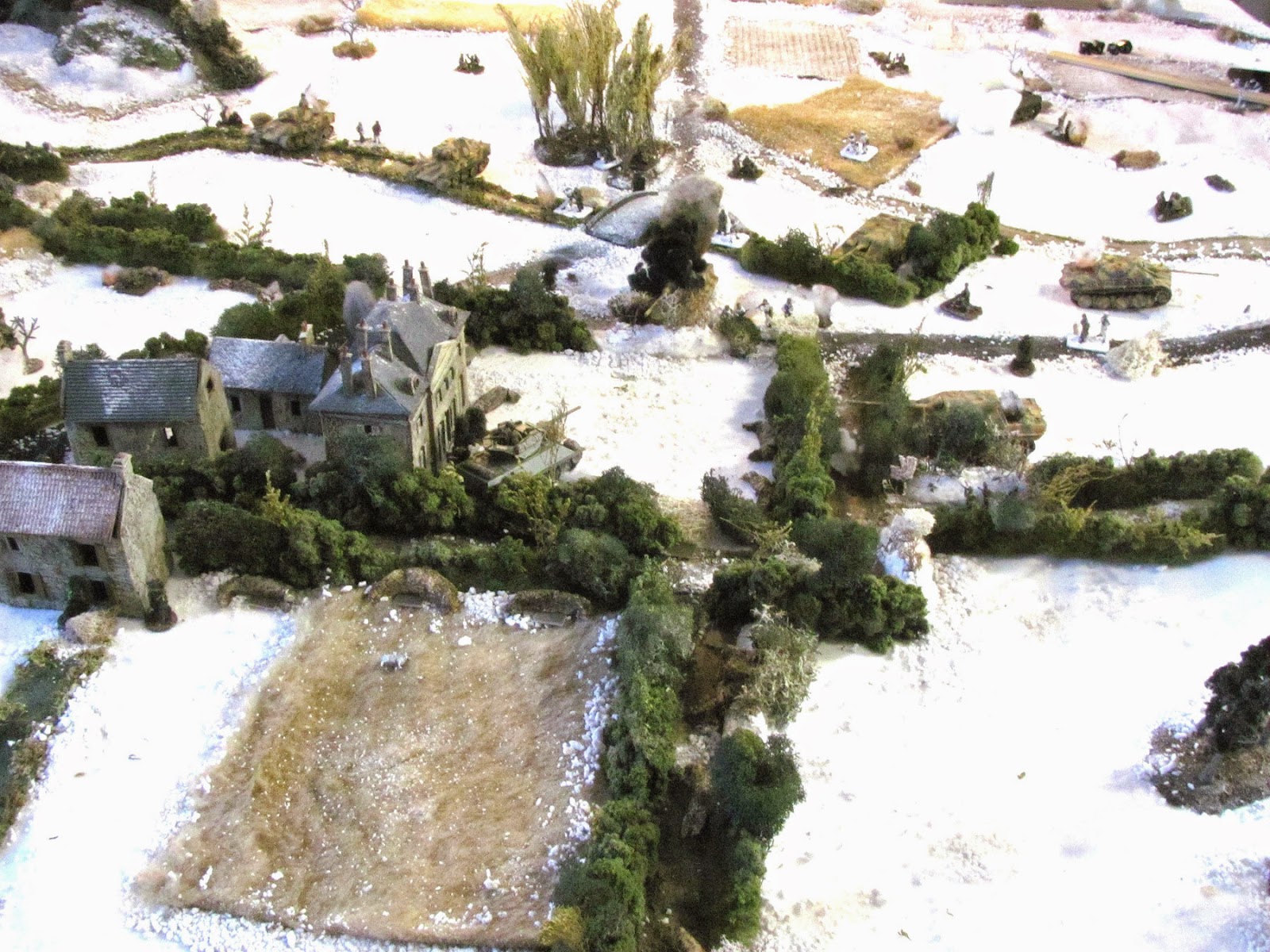 In this mid-battle overview, you can see (or not) the Sherman (top right, covered in smoke) popping over the ridge in an attempt to score an enfilade hit. Upper left the two Panthers breach the stream, supporting a German infantry company that is attacking on this flank. Machine gun fire from a number of American mg's on this flank is chewing up the attack fairly effectively. These machine guns have been left as a picket as the bulk of A Co. is withdrawn to meet the bigger threat looming around the manor.
But the big killer is the American artillery which continues to exact a steady toll on the German forces. Because they are well spread out, this toll is limited, but as a result, the German infantry are only able to get into contact with the enemy piecemeal in an uncoordinated attack.
In the mid right American bazookas continually harass a Jagdpanther from the hedge-lined lanes around the manor, taking advantage of its lack of infantry support and the tank's inability to defend to the rear and side. 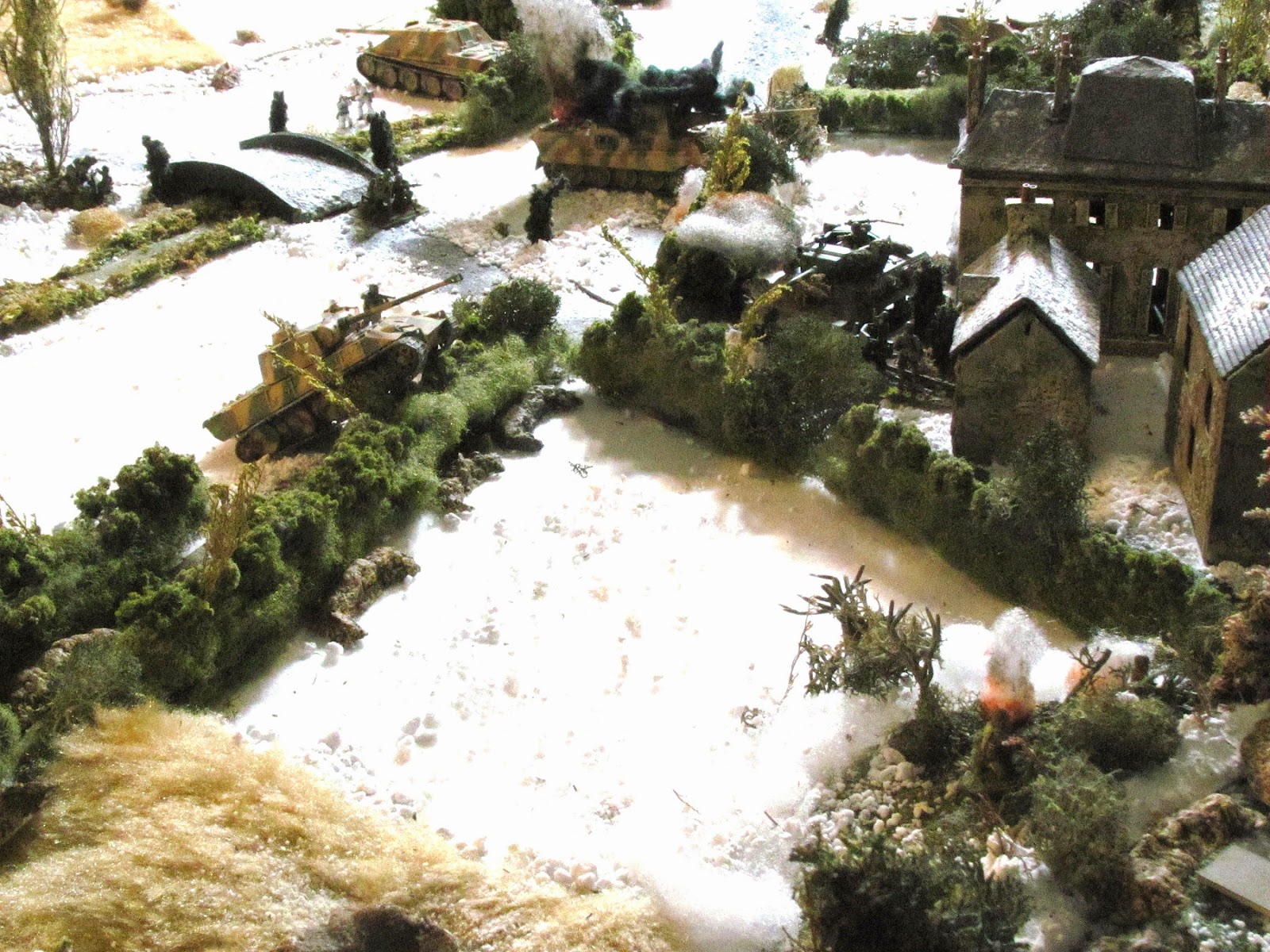 12. Clearing out the hedgerows

The arrival of the Panthers on the American left flank send the defenders fleeing back towards the hill disordered, giving up this forward line of defence and putting the battalion commander and FOO in danger of being overrun. But the Germans have precious few infantry on this flank to support these gains by the Panthers. 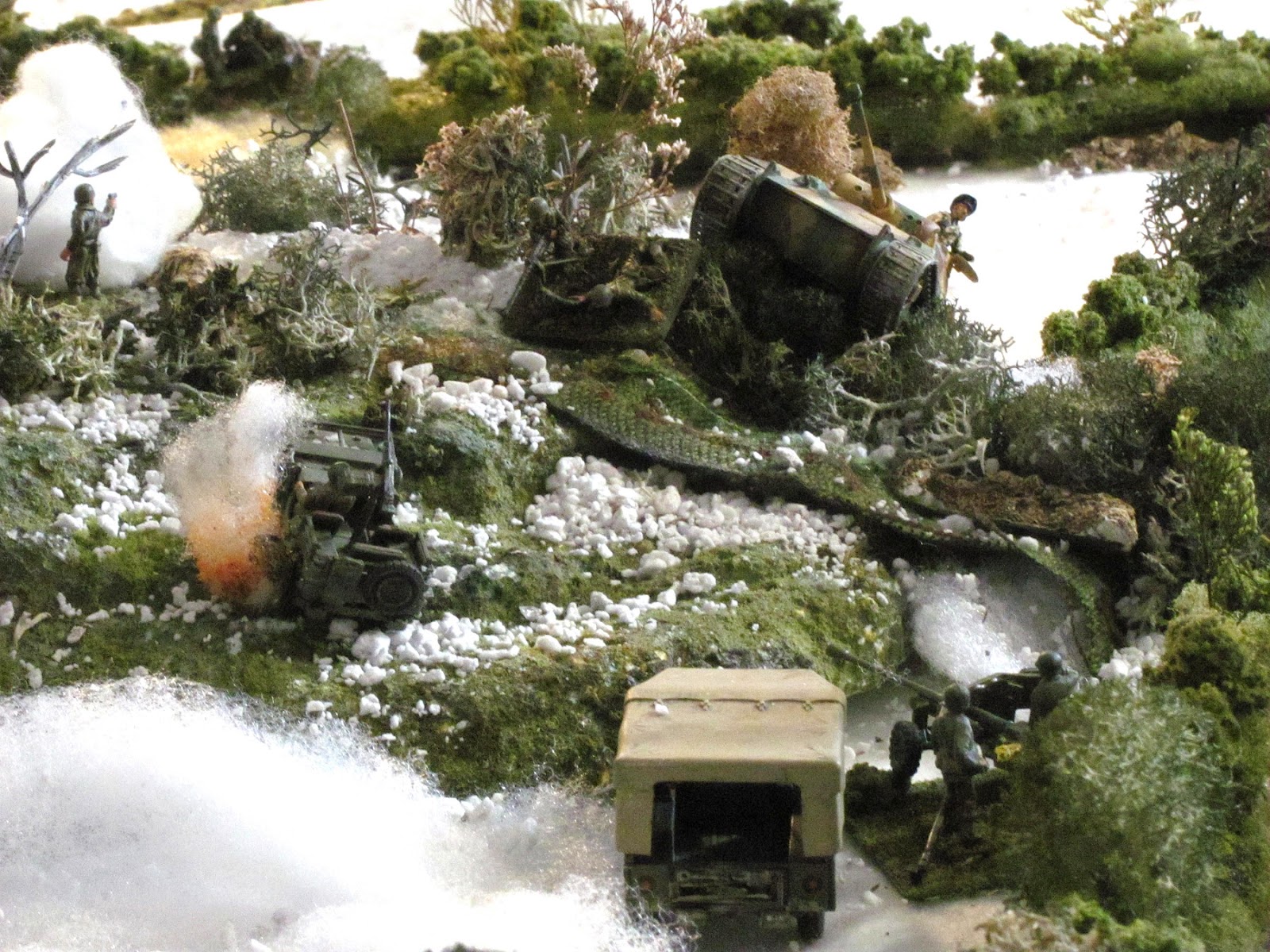 The Panthers breach the hedgerow at the top of Hill 532, forcing the 57mm AT gun to pull back or be outflanked. The FOO and battalion commander are unable to immediately withdraw but an improvised close combat by two MG stands drives one of the Panthers back off the hill. The command Panther sticks and fires at the AT gun, disordering it. 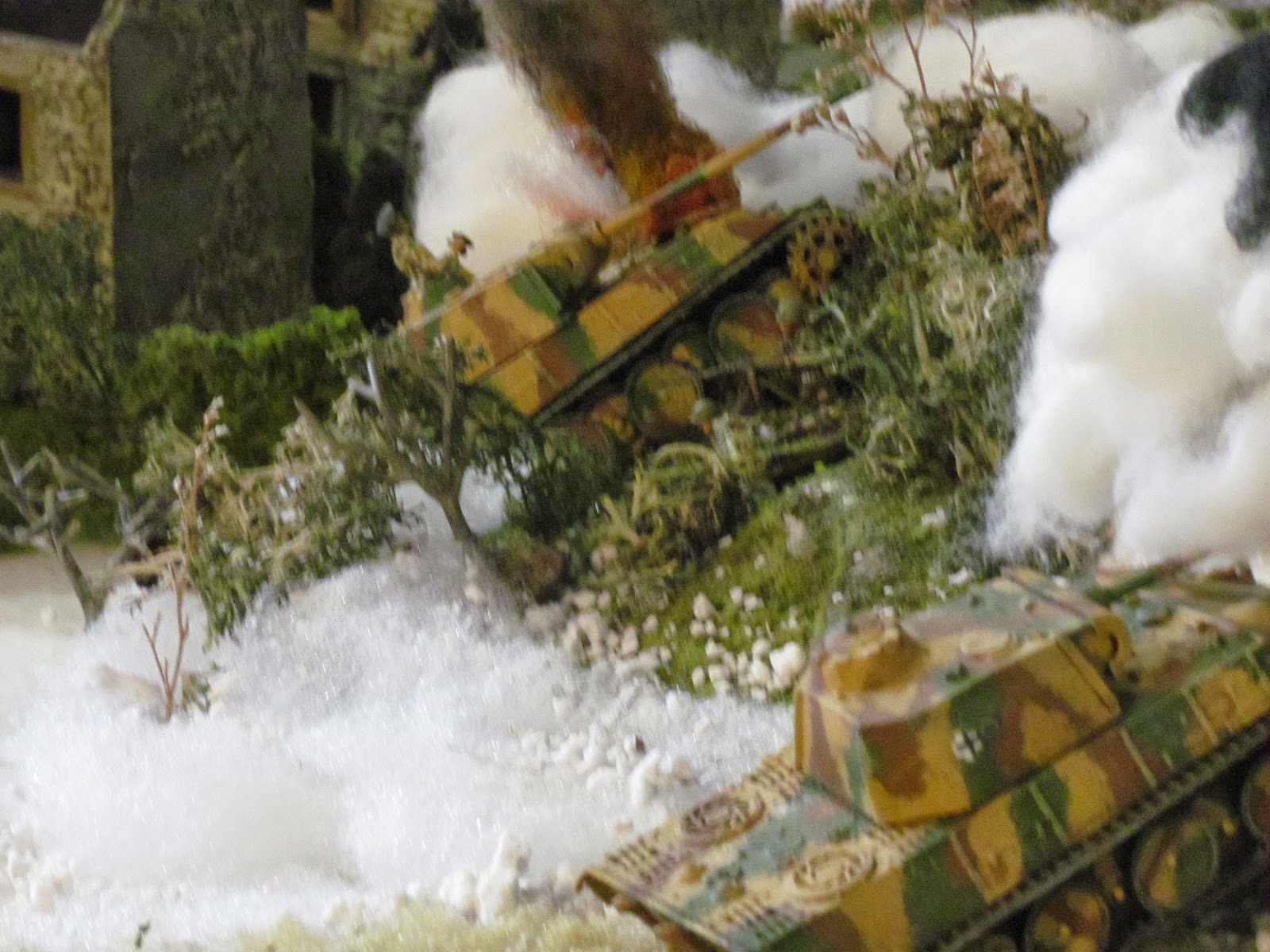 In a second CC by another MG stand the command Panther is put out of commission in a remarkable 10 vs. 1 roll. But the second Panther has rolled back up the hill. 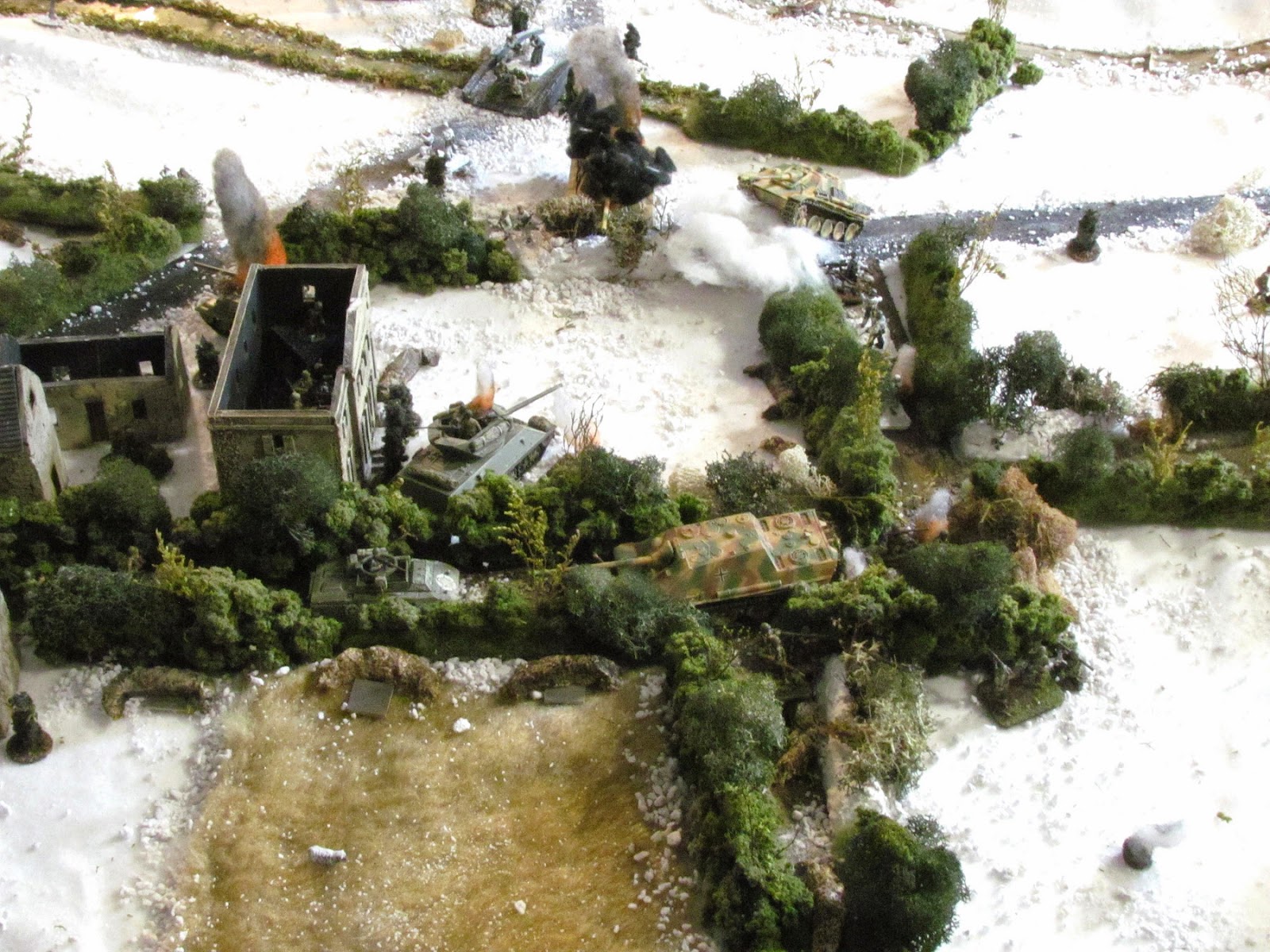 Desperate to break the stalemate that has developed in the hedgerows and lanes around the manor, the German commander makers a bid to infiltrate the manor yard under cover of smoke with his infantry (top) but a barrage of small arms fire wipes out the attack. The surviving tank destroyer trades rounds with a second Jagdpanther that has breached the hedgerow of the manor estate.

Meanwhile, south of the manor (bottom), a Jagdpanther makes a bold move, overrunning some American infantry stands among the hedgerows before being brought up short disordered by a flurry of bazooka fire and blocked by the M10's commander in his M20 armoured utility car. The Jagdpanther is forced to withdraw after loosing close combat with the infantry. 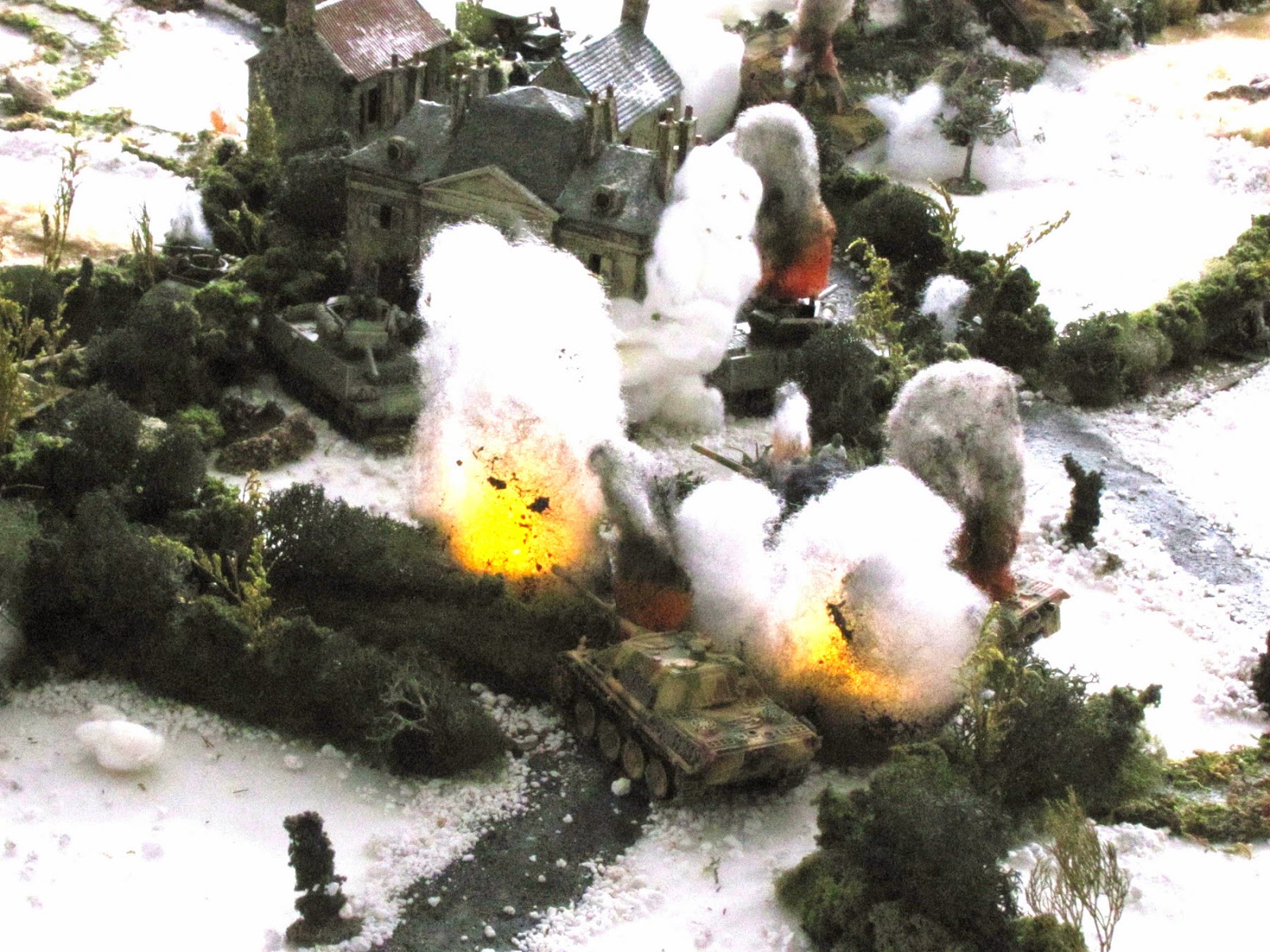 After a few rounds of failed calls for fire a “time on target” strike brings two battalions of American artillery down on the head of the breaching Jagdpanther, knocking it out along with the German company commander next to it. 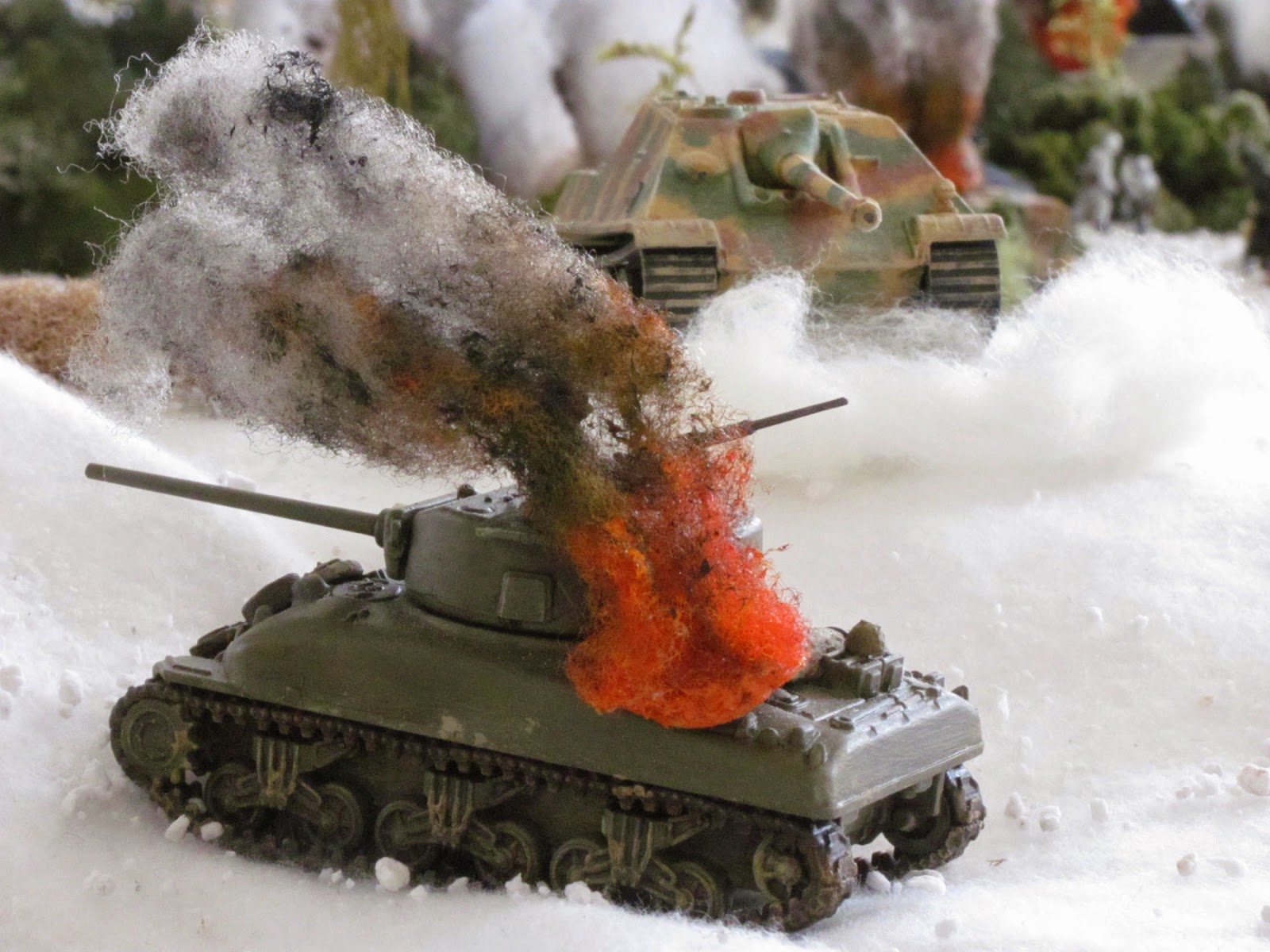 The third Jagdpanther has been trading shots over the ridge at close range with the Sherman that has been harassing the German rear, and finally KO's it - a duel whose outcome was all but certain, although it took longer than the Germans could afford! 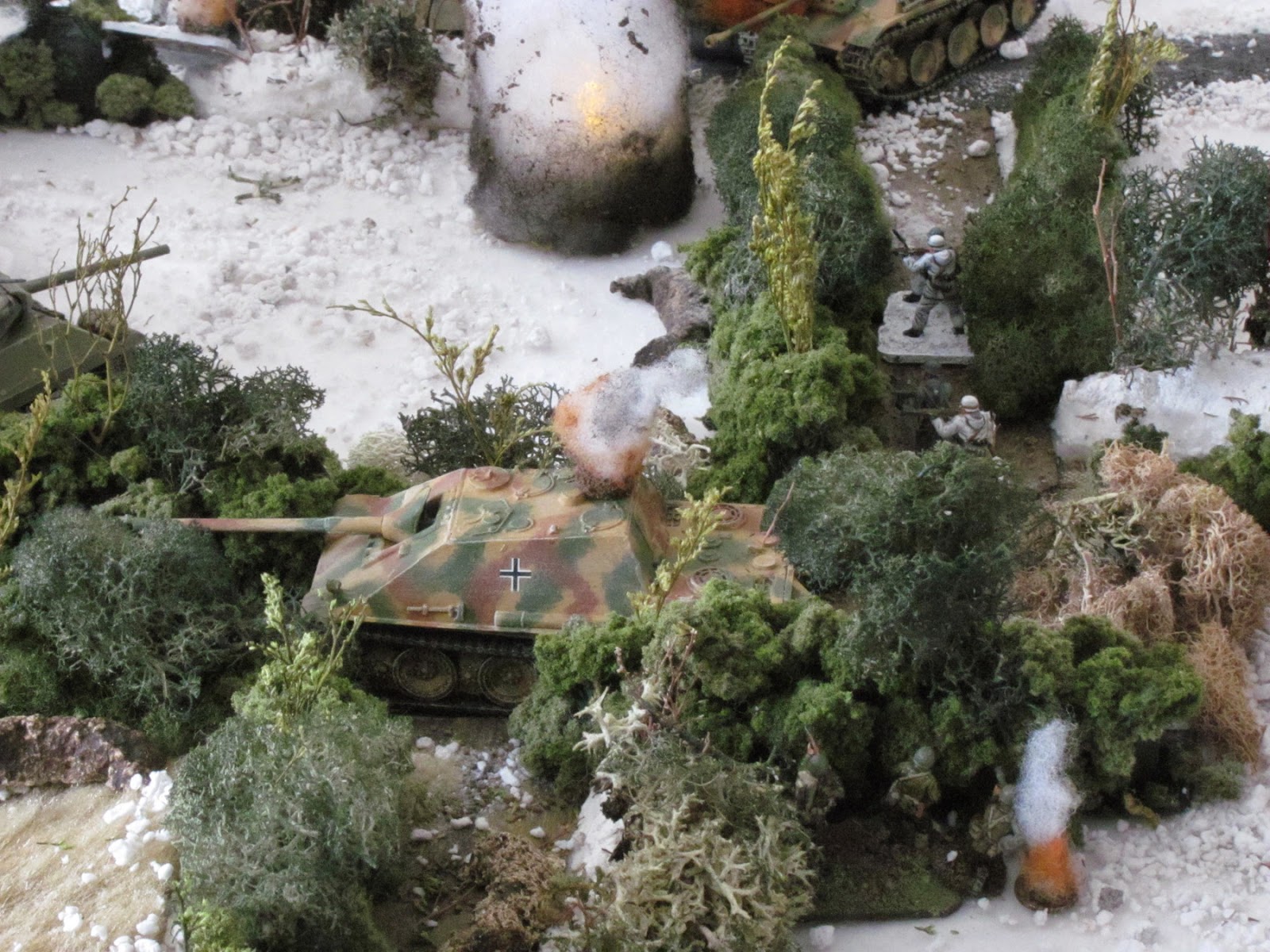 18. Back into the lane ways

The Jagdpanther makes a second attempt to force its way into the lane way thick with American infantry. It is again disordered but this time drives off the close assaults, only to fail its maneuver roll the next round and retreat. Meanwhile, with German casualties around 50% or higher for the three panzergrenadier companies, it is difficult to get any attack going as they hunker down behind the hedges. 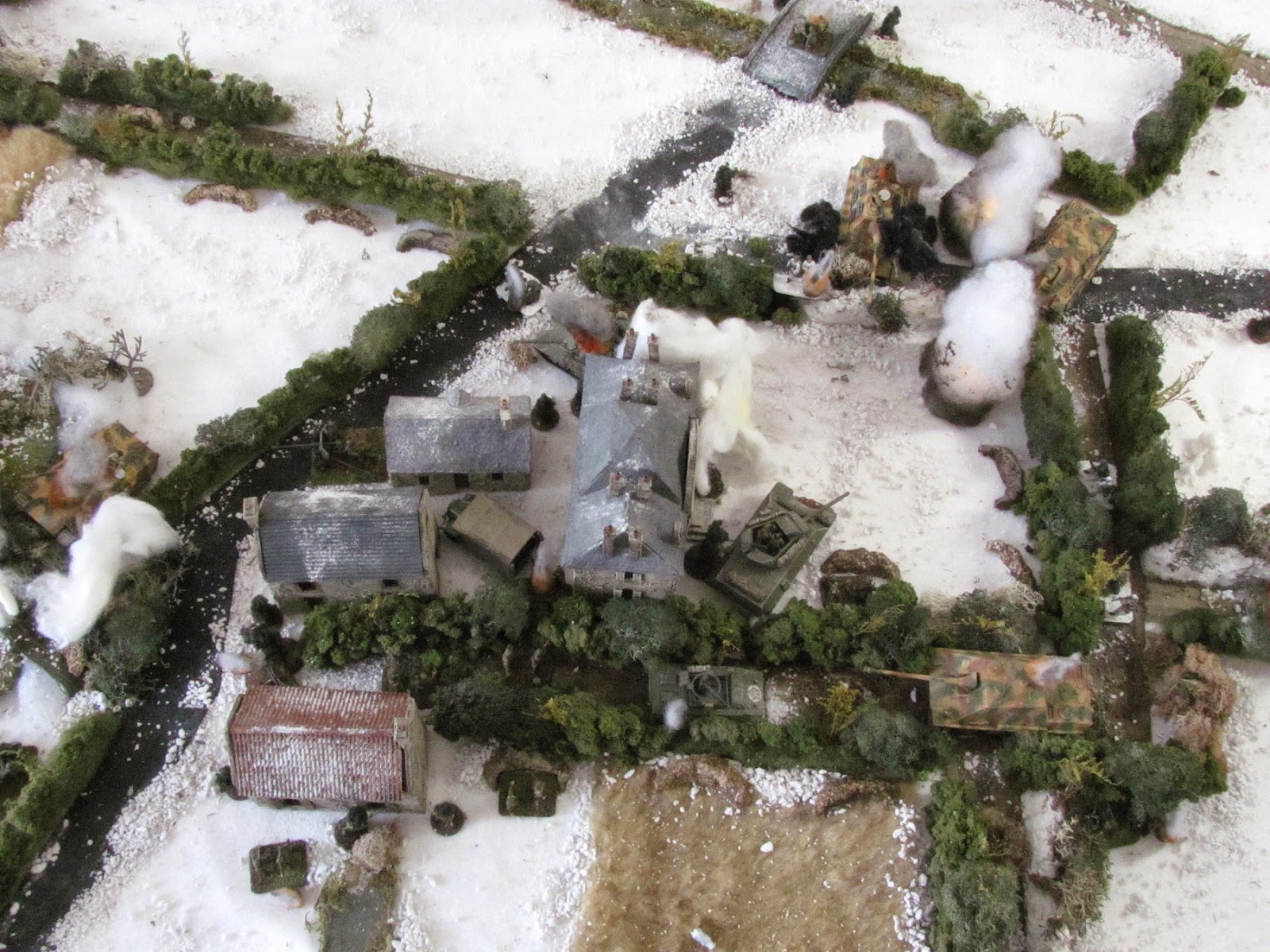 This aerial shows the Jagdpanther under the TOT with the second besieged in the lane by the manor. On the far left one Panther burns while the second (off picture) breaches to engage the 57mm. Although not seen the Americans are solidly dug in in all of the built up sectors and have so far repulsed any German attempts to gain a foothold in the manor area. 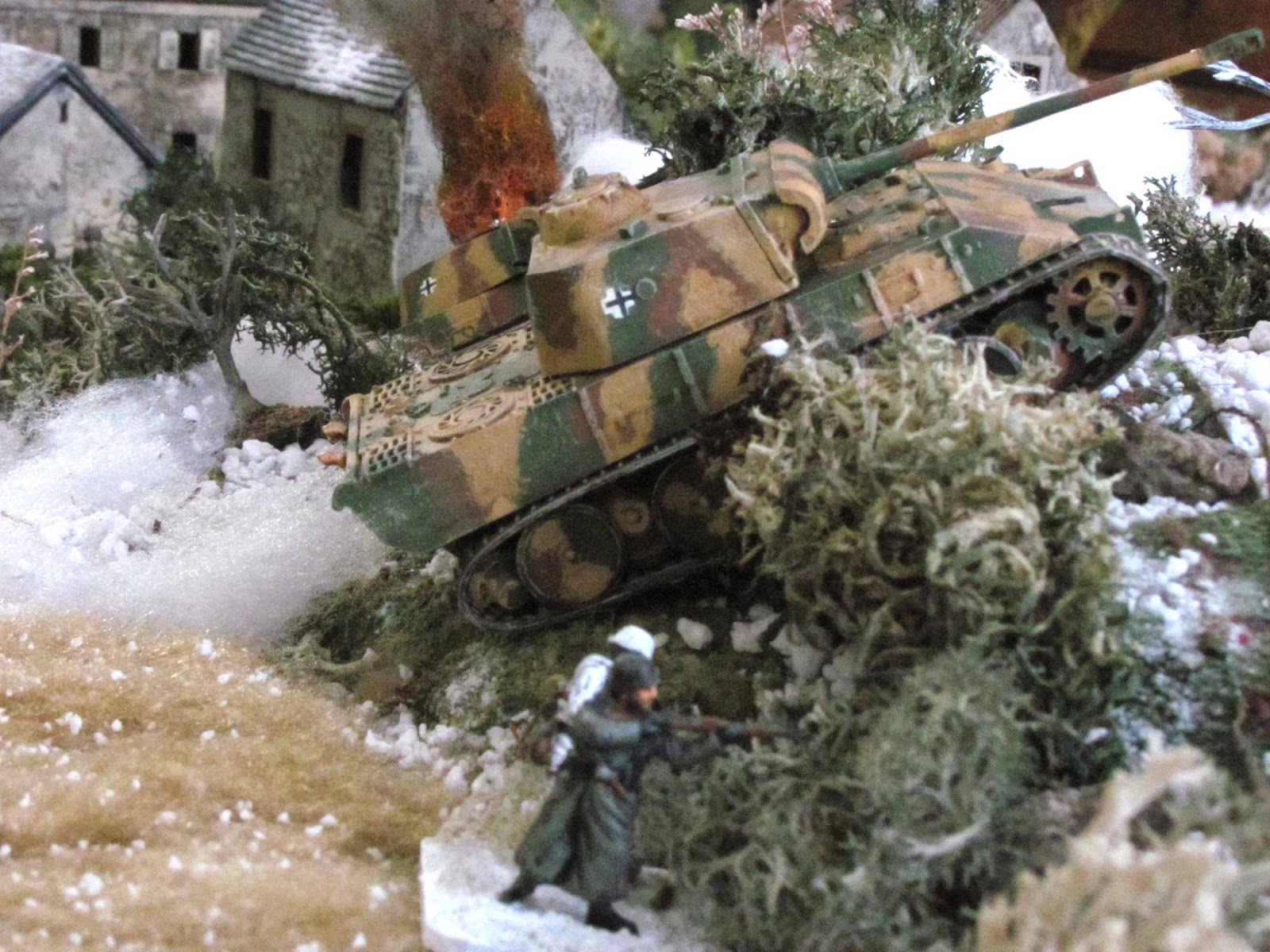 North of Dom Butgenbach the remaining Panther, supported by a lone section of infantry, manages to gain the crest of the hill formerly occupied by the American FOO and battalion commander, who have been able to finally withdraw. 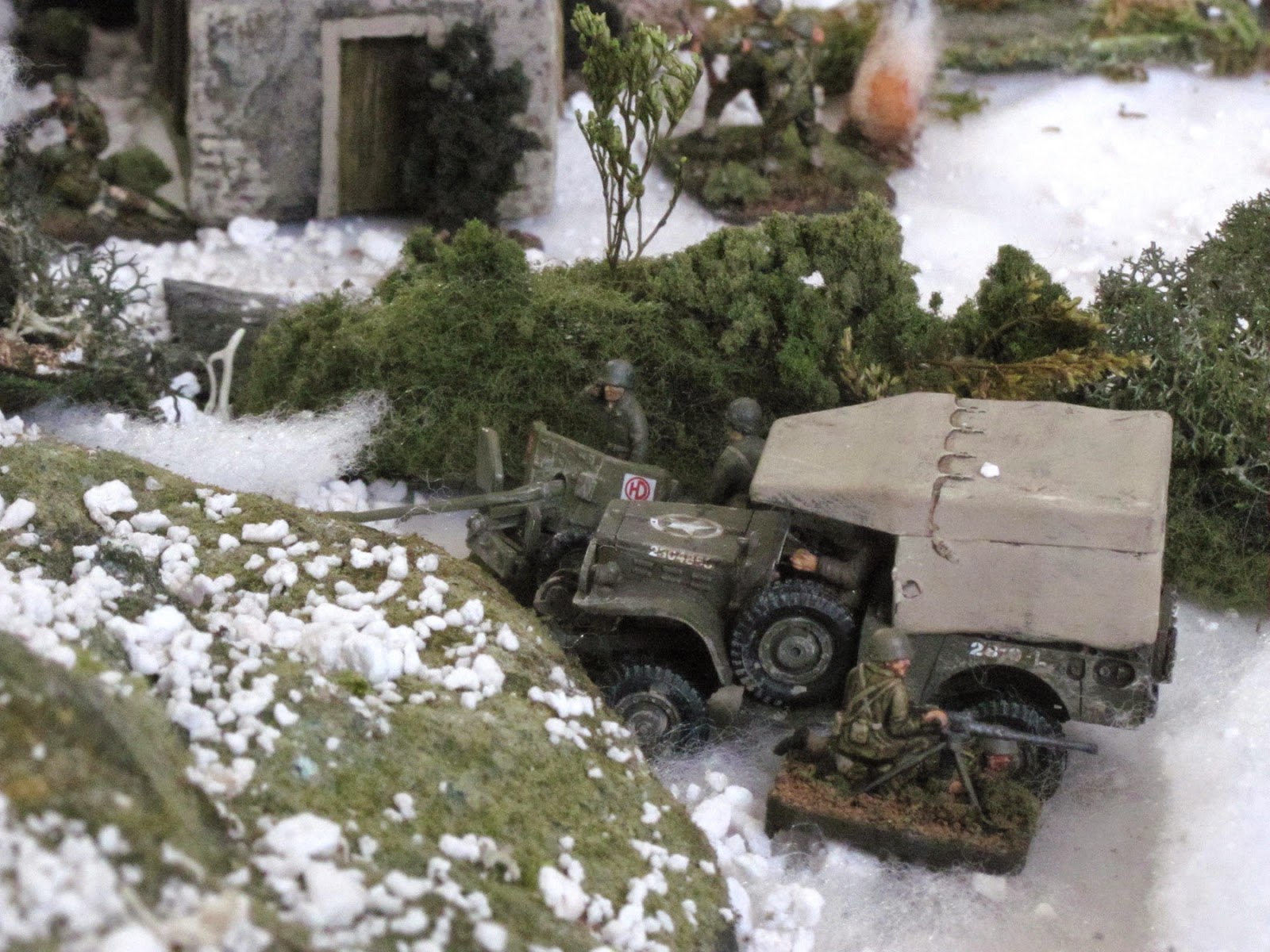 21. But the Americans wait behind the ridge of Hill 593

With the nearest Panther knocked out, the 57 mm manages to re-emplace in its new position just back from the ridge, where it waits for the second tank. 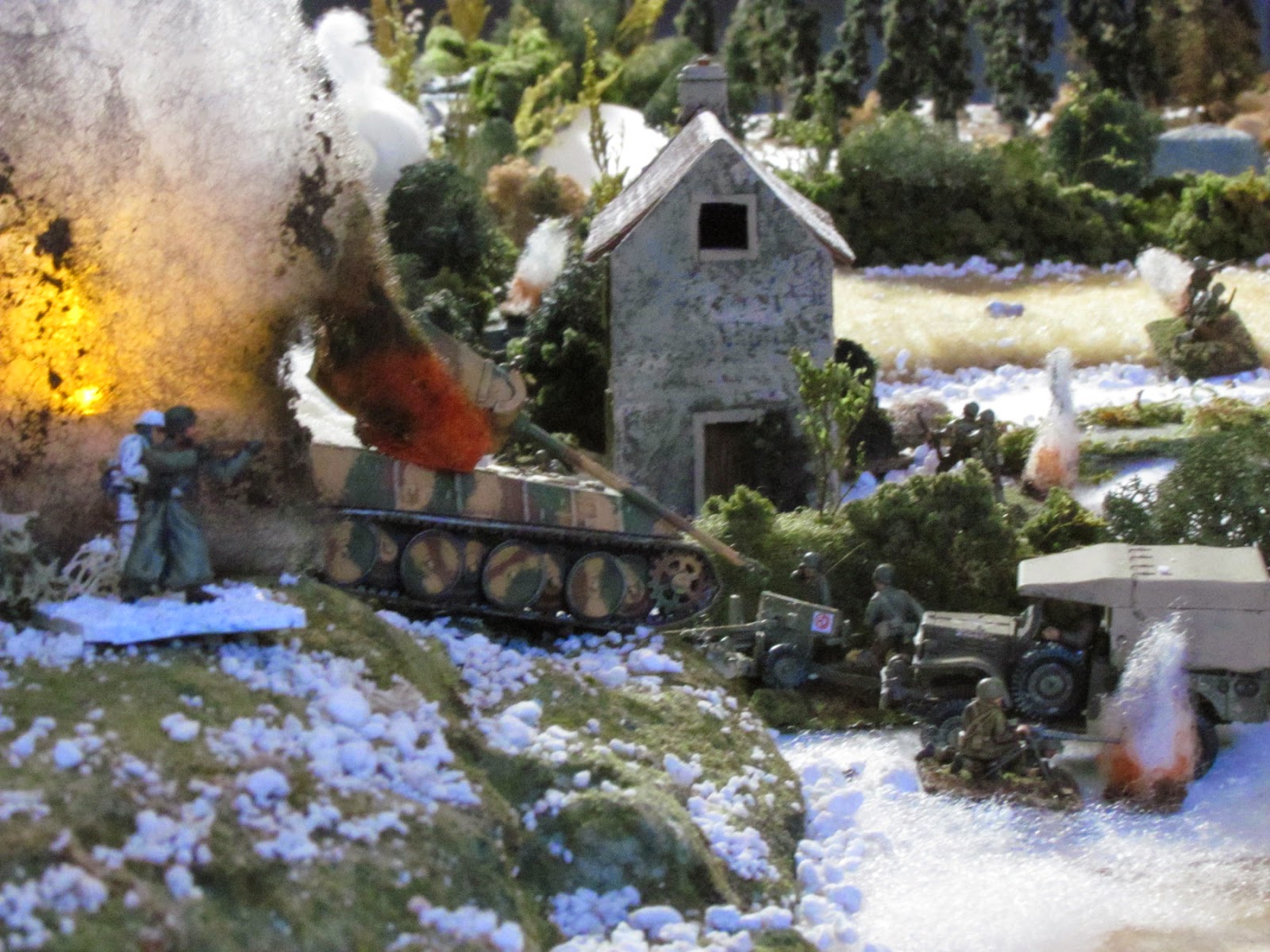 Coming over the ridge the Panther moves to close assault the American AT gun rather than take the double tap. But it is blown sky high by a well-placed round at close range. Immediately afterwards the supporting infantry are also taken out by an artillery stonk, eliminating the threat on this flank. 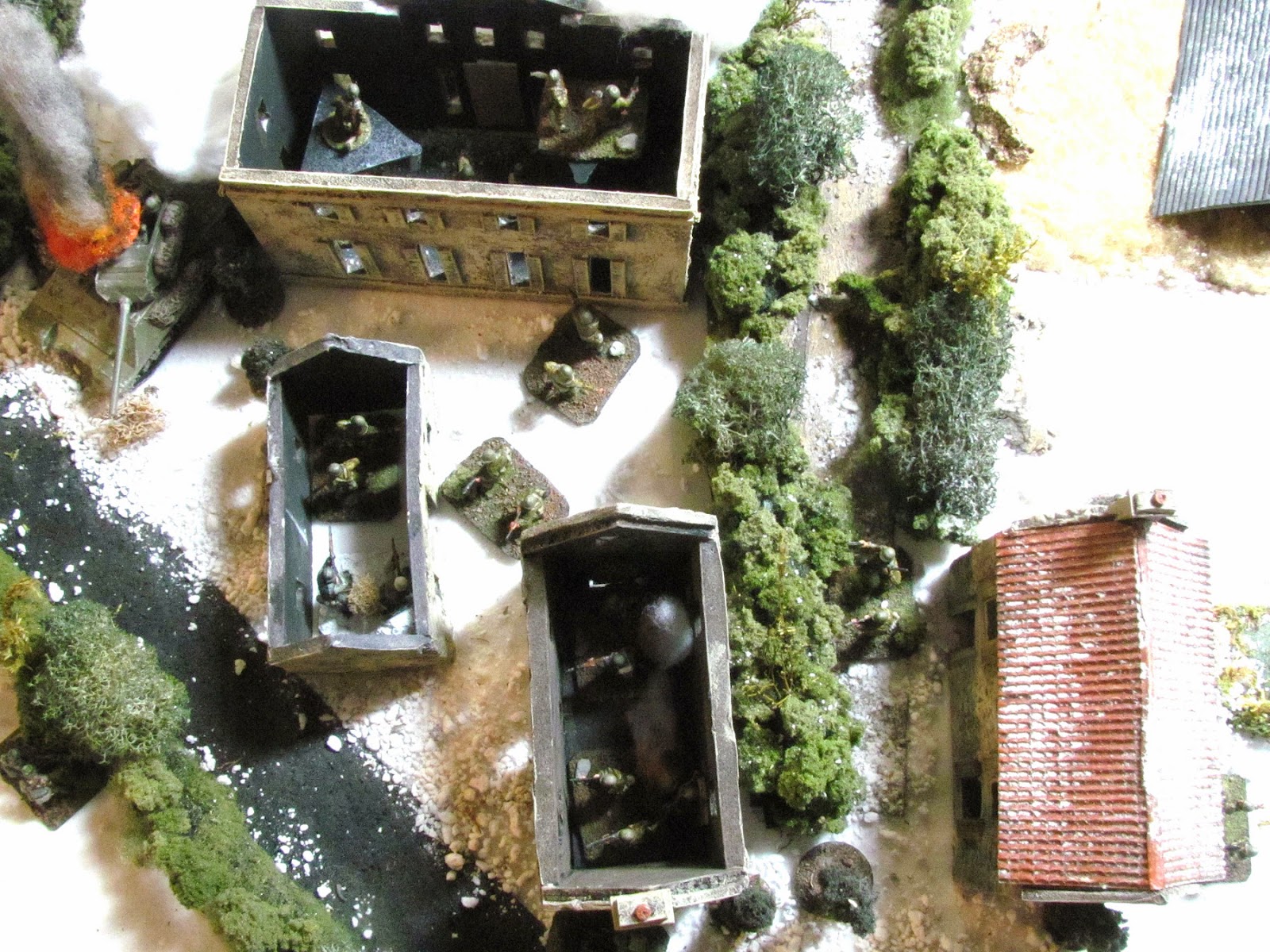 23. Only infiltration into Dom Butgenbach

Next door in Dom Butgenbach, a lone German section (in house at lower left) knocks out the 57mm AT gun emplaced here and engages the American infantry. This is the only incursion into the built up sectors of the village and the Germans are quickly driven out again by counterattack. 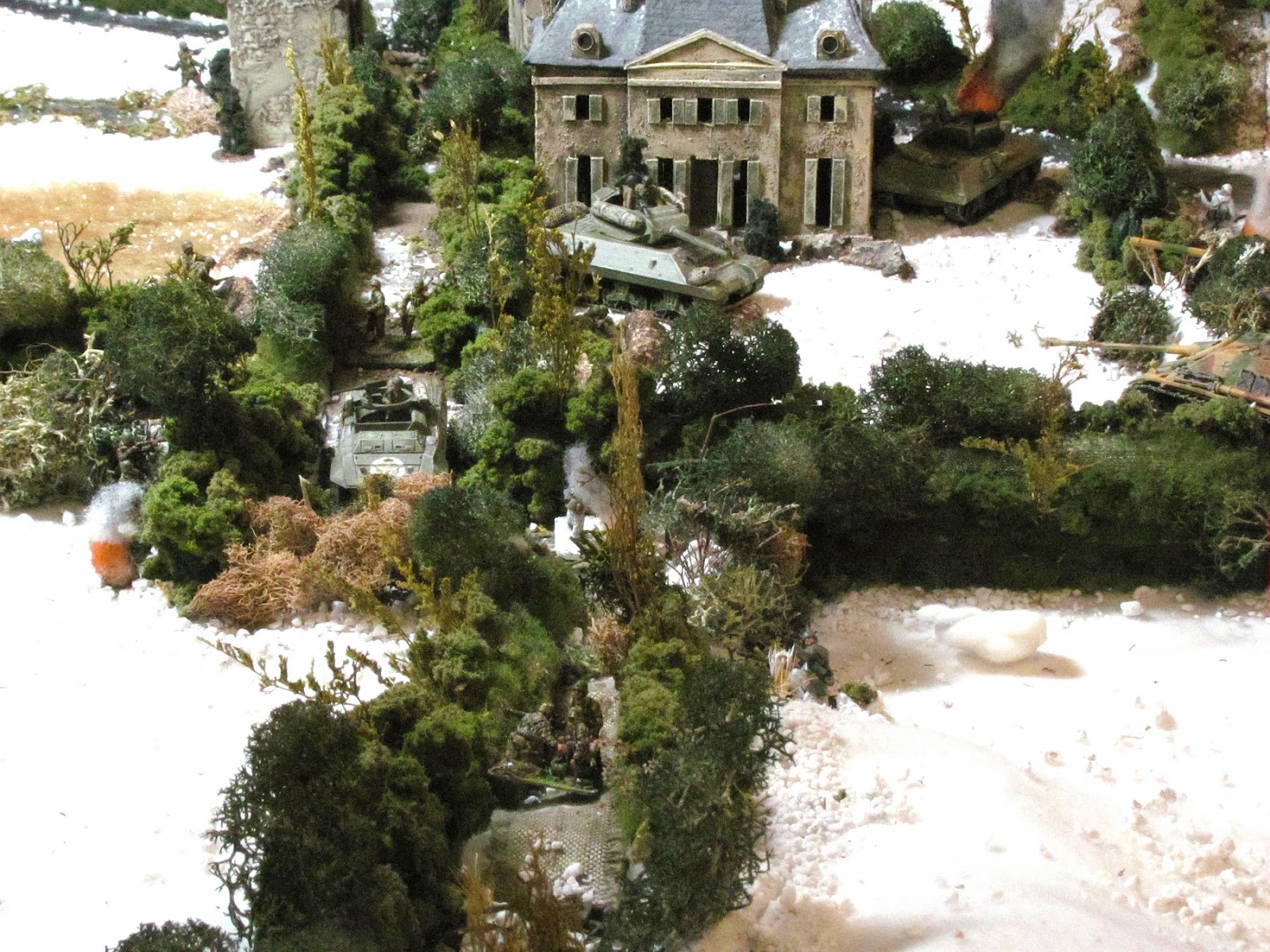 Late to the battle, remnants of the German third company, tied up by encounters with the Shermans on Hill 613, begin to move into the lane south of the manor. But they are too late to turn the tide of battle which is grinding to a close. 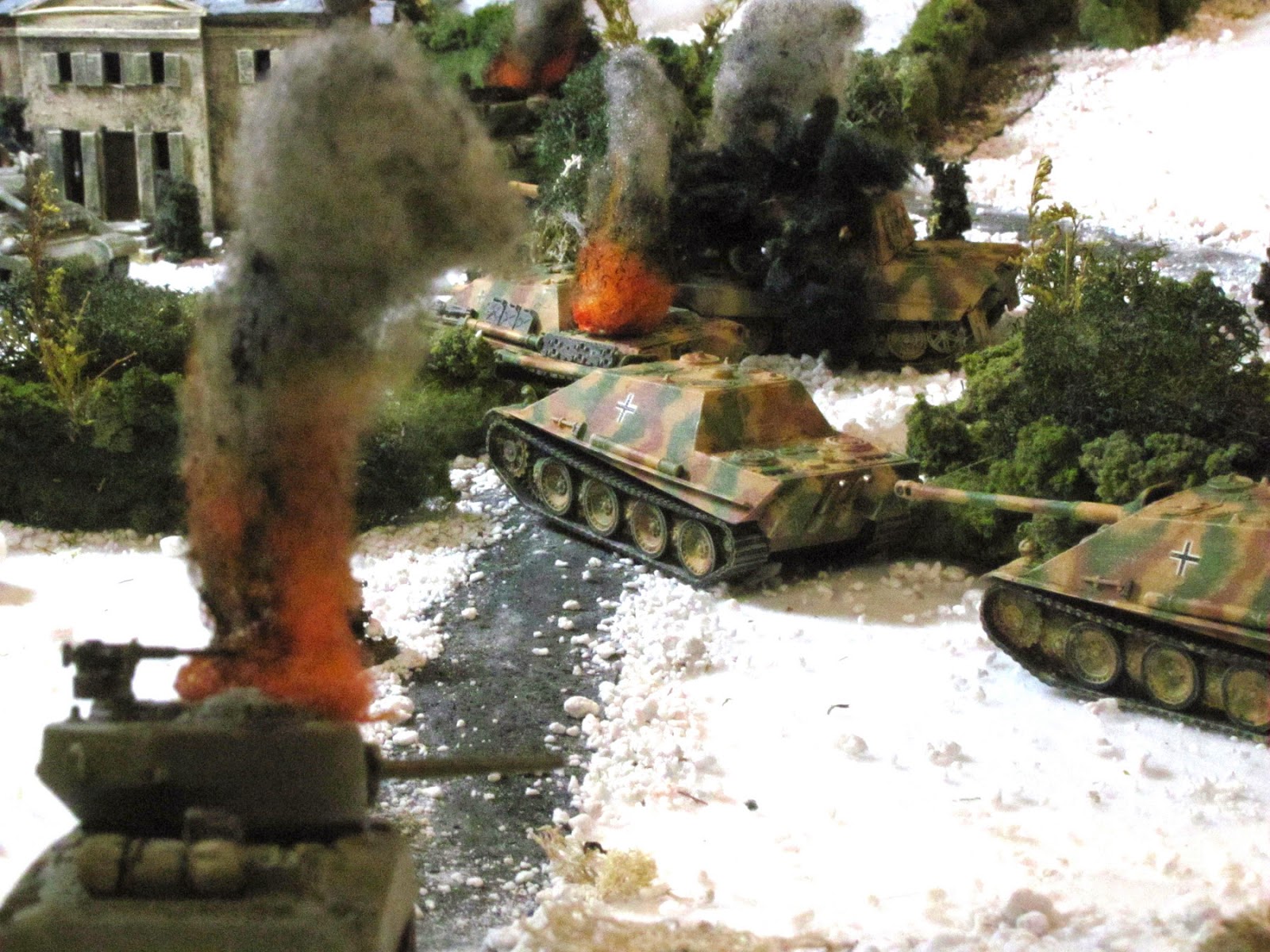 After withdrawing as a result of a failed maneuver roll, the two surviving Jagdpanthers once again move towards Dom Butgenbach through the burning wrecks surrounding the manor. But with little infantry support left, time running out and the American artillery still active, it is clear that this attack has run its course. 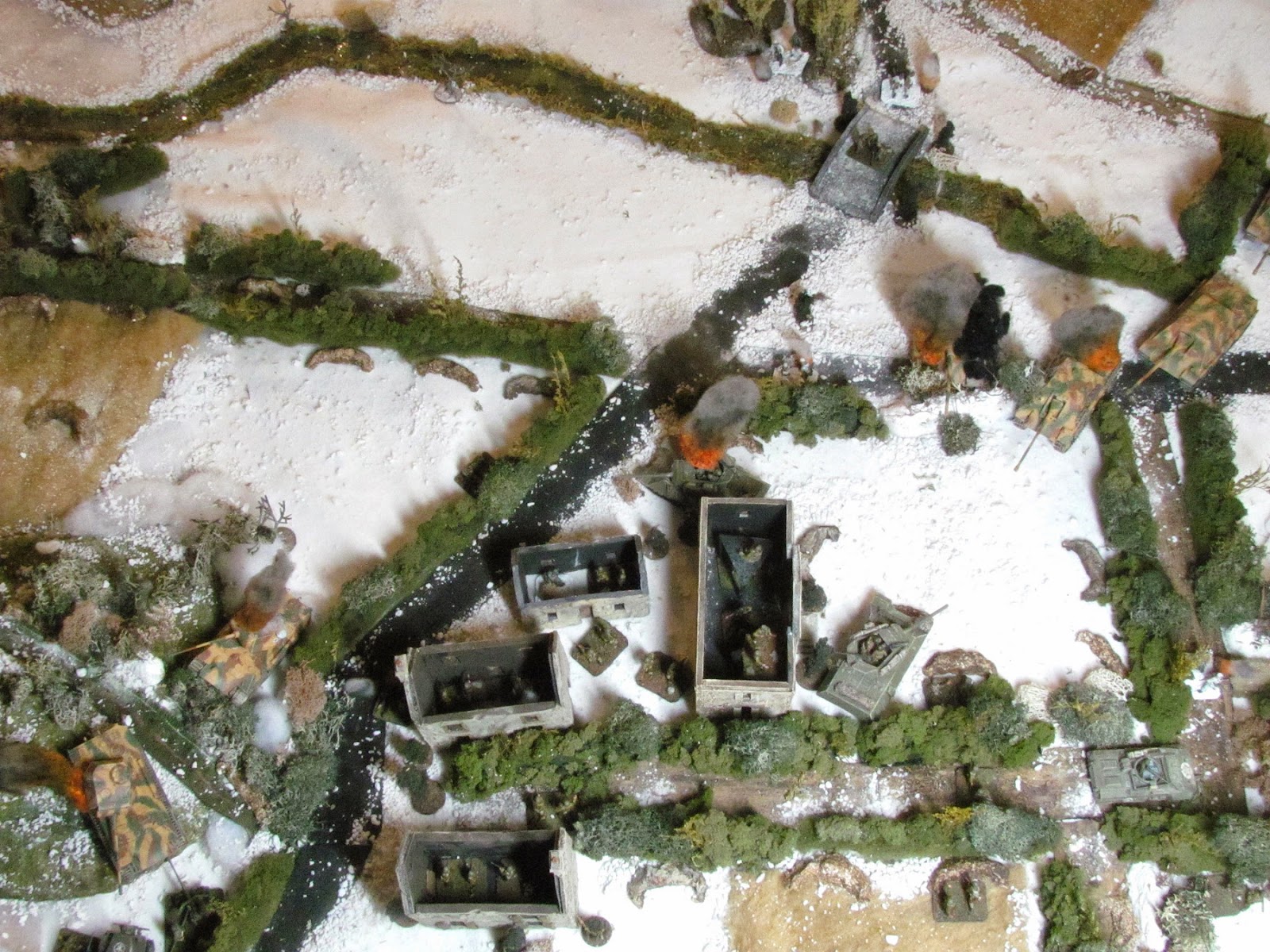 This overview shows the Americans well-entrenched in numbers in and around Dom Butgenbach. The two KO'd Panthers lie on the hill on the bottom left while the M10 still miraculously holds its position in the manor grounds. Other than the Jagdpanthers, perhaps a half dozen German infantry stands are still operating around Dom Butgenbach, but any attempt on the village will be met with a lot of small arms fire.
The German objective had been to force the road, opening a way forward. This they failed to do, and came up short on the 11 Victory Points needed to achieve a draw, only scoring seven. So victory goes to the Americans.