Somewhere on the Eastern Front, 1945


This was another non-historical scenario I put together as a Battlefront WWII learning scenario for a new player, introducing him to combined tank and infantry tactics along with employing minefields, barbed wire and AT guns in a more or less static defence.

The scenario represents a Russian armoured attack on a prepared German position, with well dug in troops protected by barbed wire and minefields backed by a heavy Pak screen. The objective is simply to inflict the most damage, with the Germans requiring a two to one ratio in victory points (i.e. inflicting twice as much damage as their opponent).

The game was played in 20mm using the Battlefront WWII rule set, and was really an excuse to trot out my newly painted HaT Russian tank riders, mounted in small groups of two and three per stand so that they can mount and dismount from the vehicles. 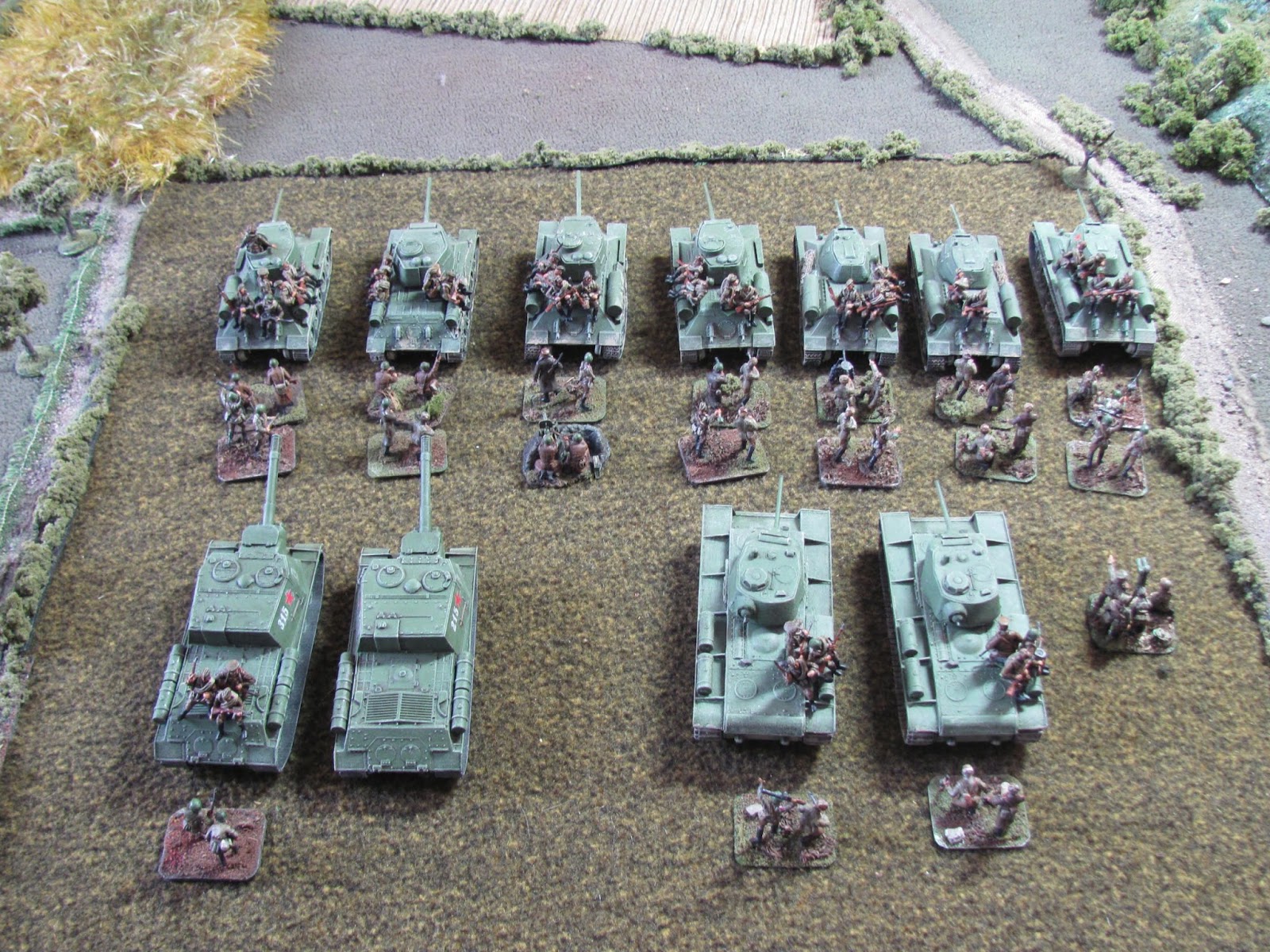 The Attackers
The Russians are attacking with a medium (T34) and heavy tank (KV1) company, with close support from a self-propelled battery of ISU 152's. An SMG company of tank riders provides infantry support, while an attached FOO in a well-concealed observation post, on the board at the beginning of the game, provides a link to the off board supporting battery of 120mm mortars. 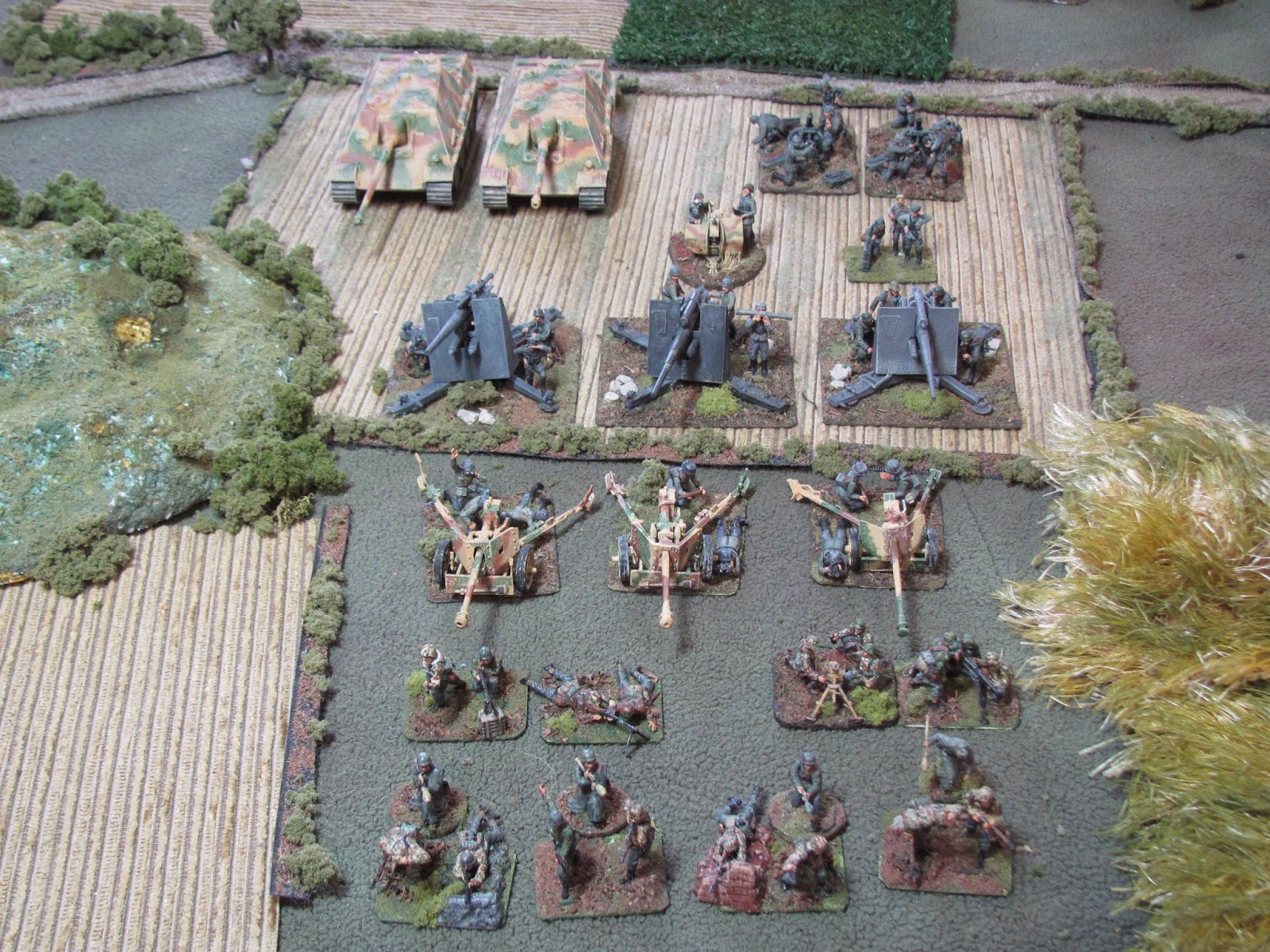 The Defenders
The German defence consists of a reduced company of infantry with three Pak 40's attached. A heavy flak battery of 3 88's and a 20mm Flak AA back them up, along with a battery of 120 mm mortars as off board fire support. A Panzerjaeger platoon of two Jagdpanzer IV's waits  in the wings, slated to arrive as a counterattack force somewhere within the last four turns of the 10 turn game. 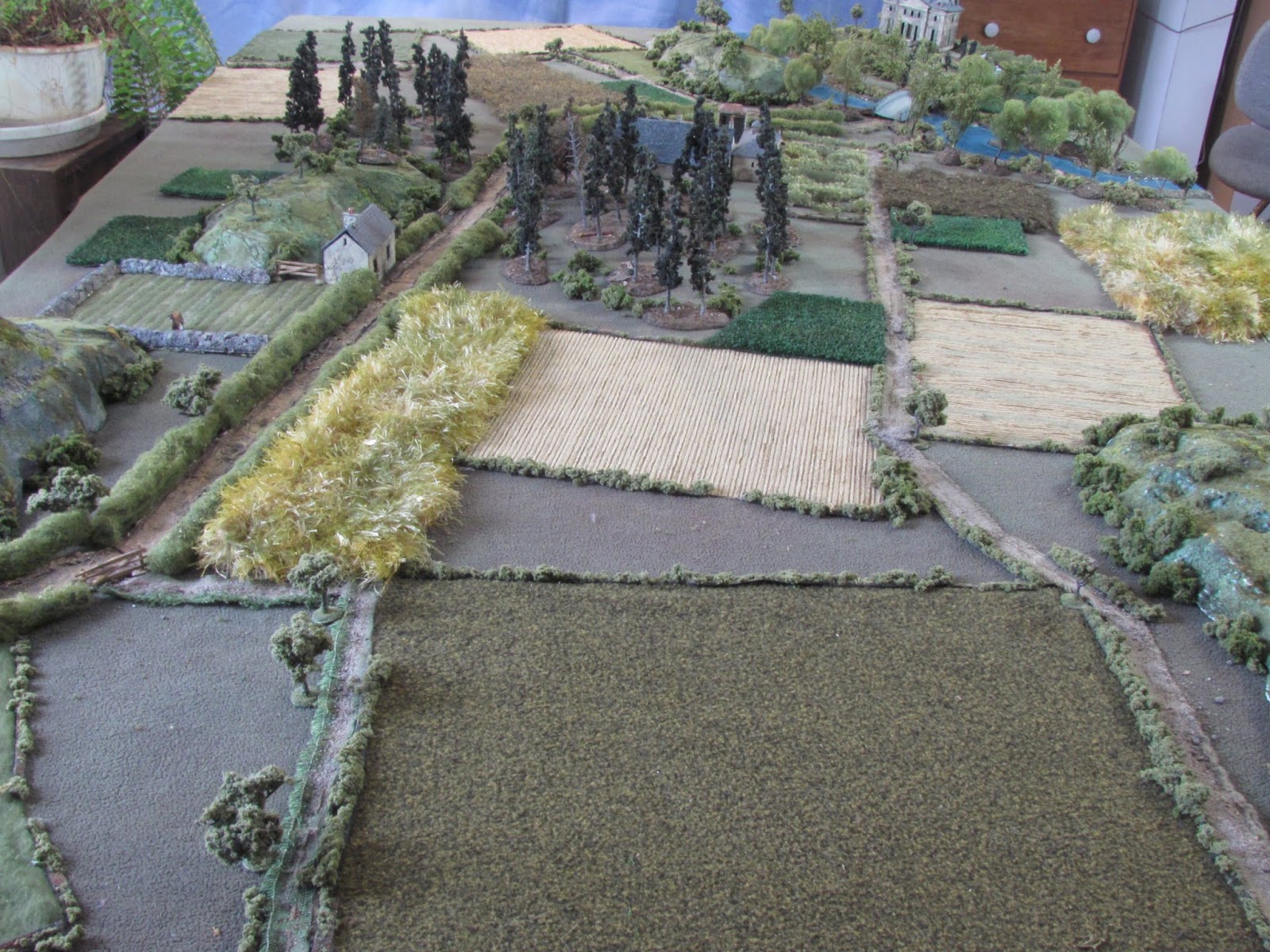 The Battlefield
The battlefield as seen from the Russian end of the board. Woods, hills, fields of tall crops and a road bordered by a hedgerow break up the terrain and provide loads of cover (and obstacles for advancing armour). 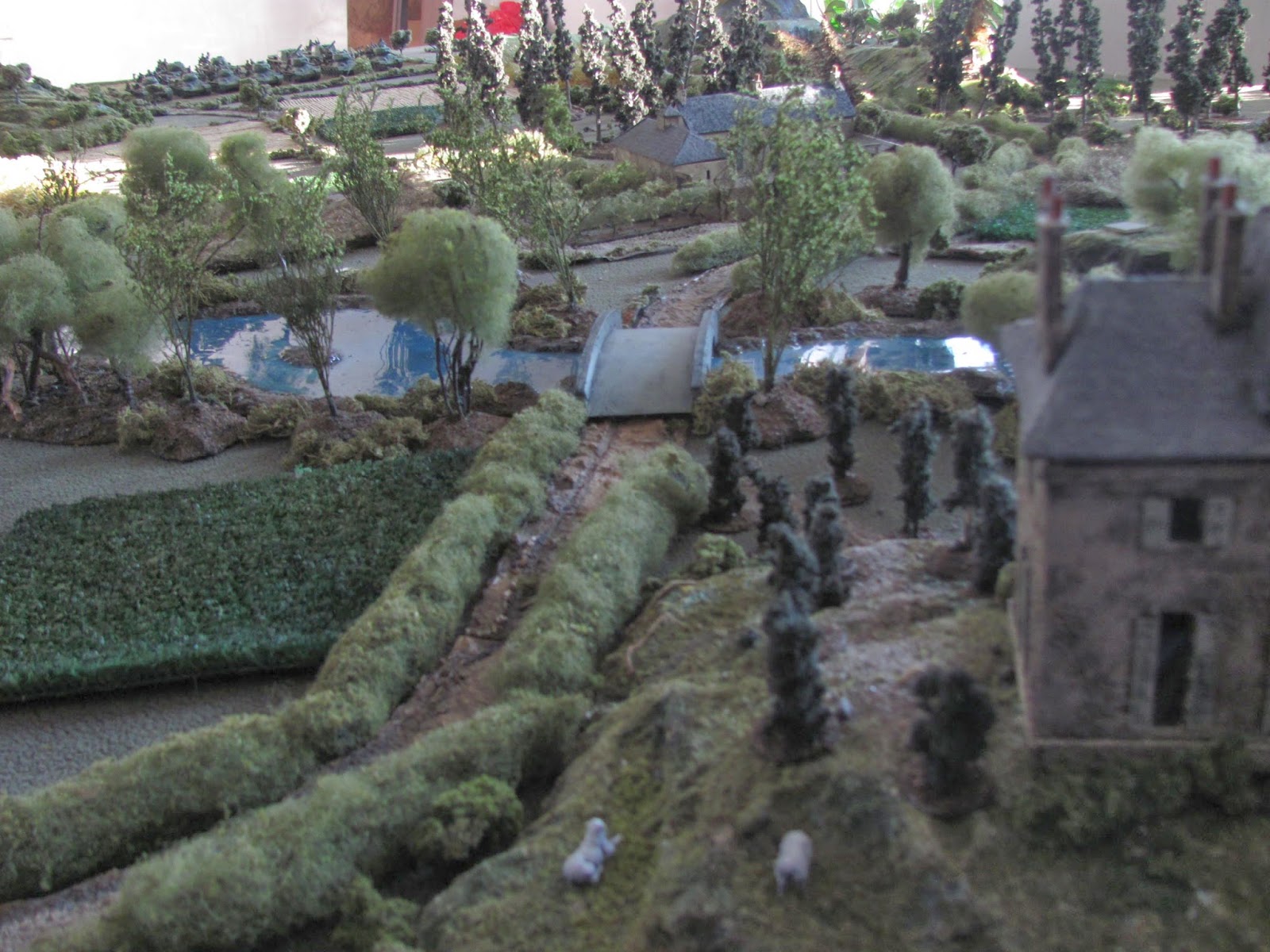 View from the chateau
A river with a single bridge spans the right corner of the board with a chateau on a hill (three levels) giving the German commander a good view of most of the battlefield. 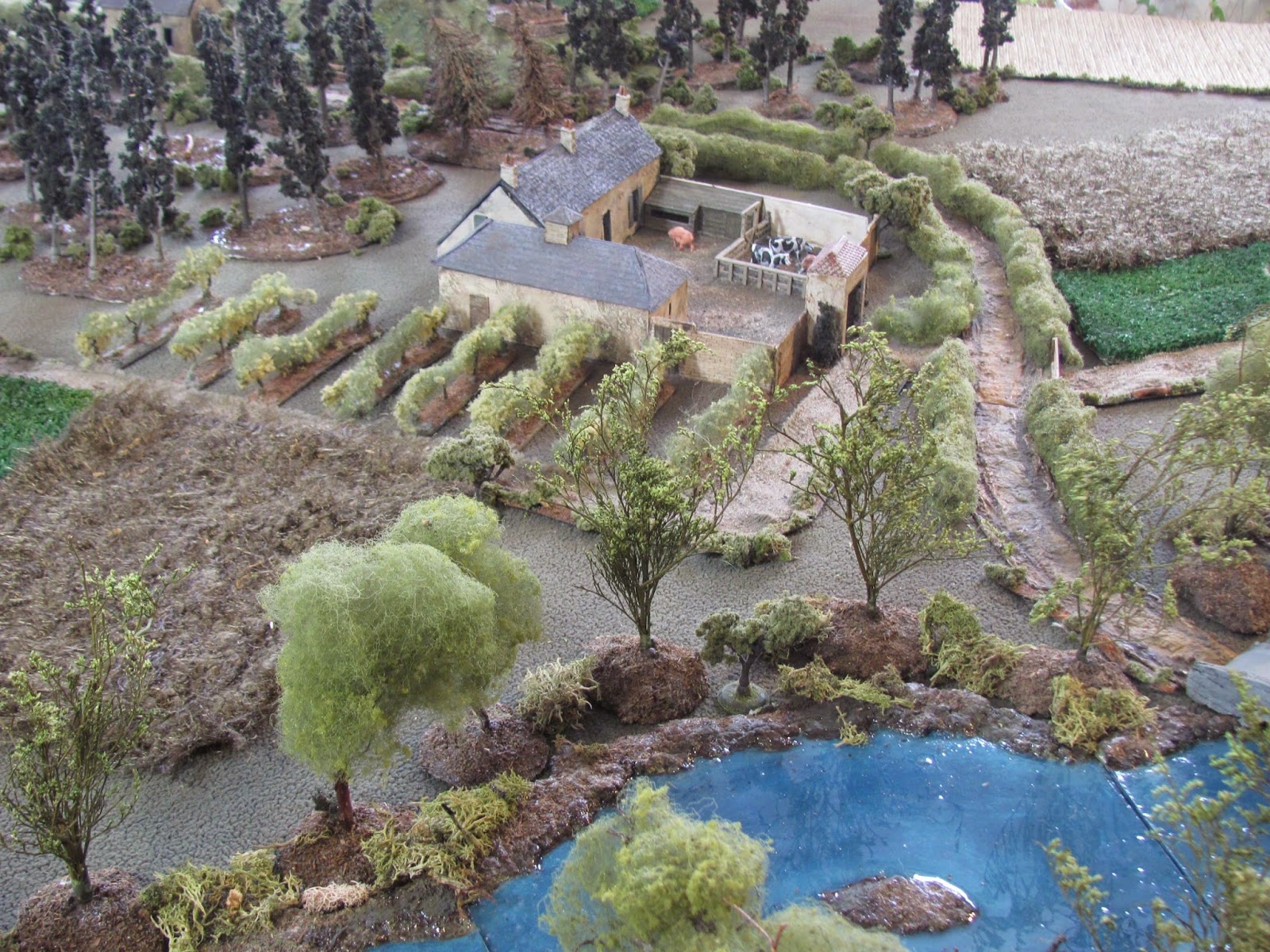 Farm complex
A walled farm complex next to a woods with dense underbrush dominates the centre of the battlefield. 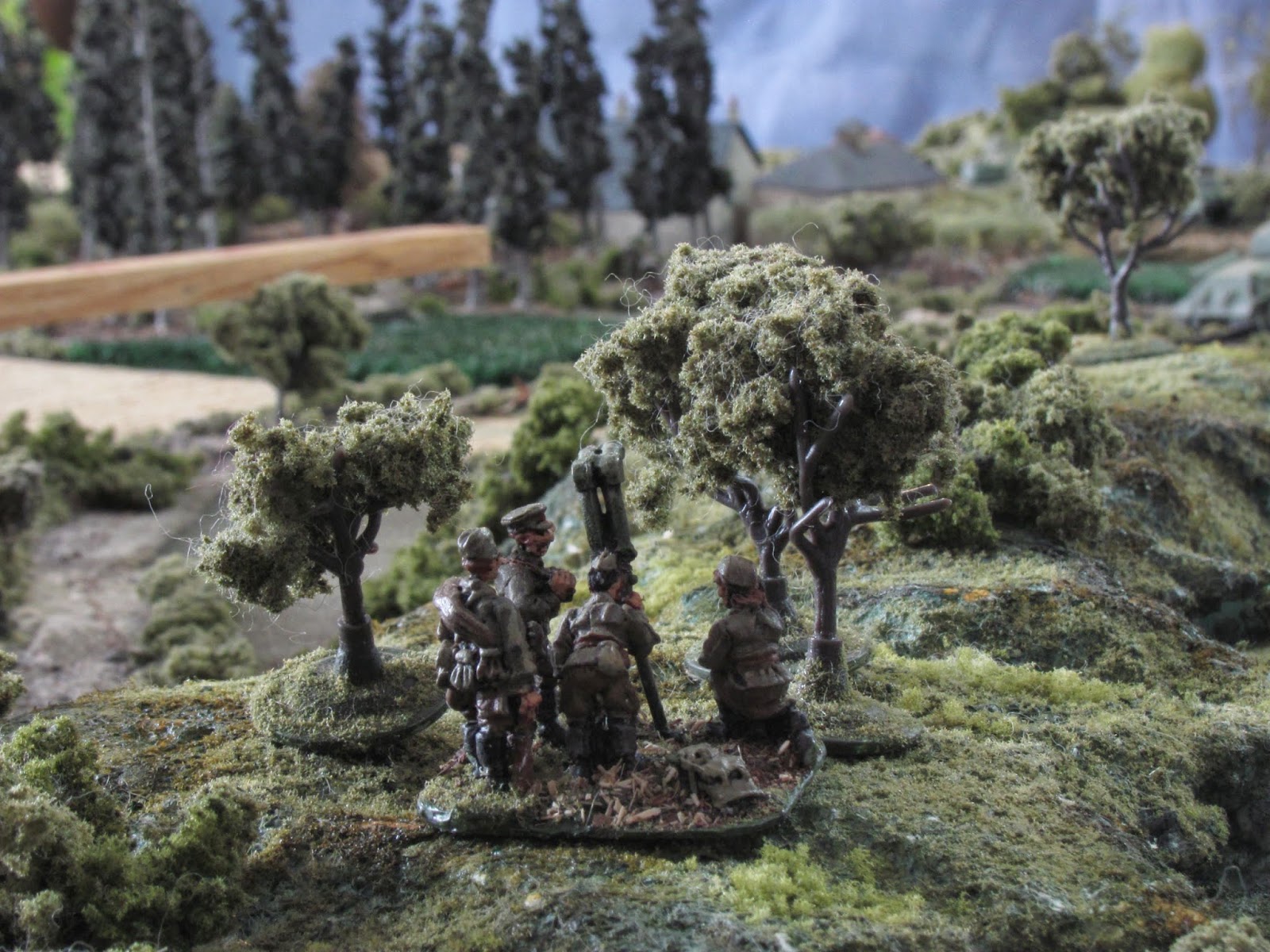 FOO on a hill
At the Russian end of the board a FOO in a hidden observation point on a low hill (one level) observes the fall of the preliminary barrage and  calls in fire throughout the battle for the off board mortars. The Russians are given a pregame barrage consisting of the guns of two heavy artillery battalions as well as the heavy mortar battery continuing throughout in direct support.
The tabletop composite below shows the location of the two rounds of concentrations on suspected enemy positions as well as the final round of smoke. The German wire and minefield defences, (minefield location unknown to the attacker), are also indicated. 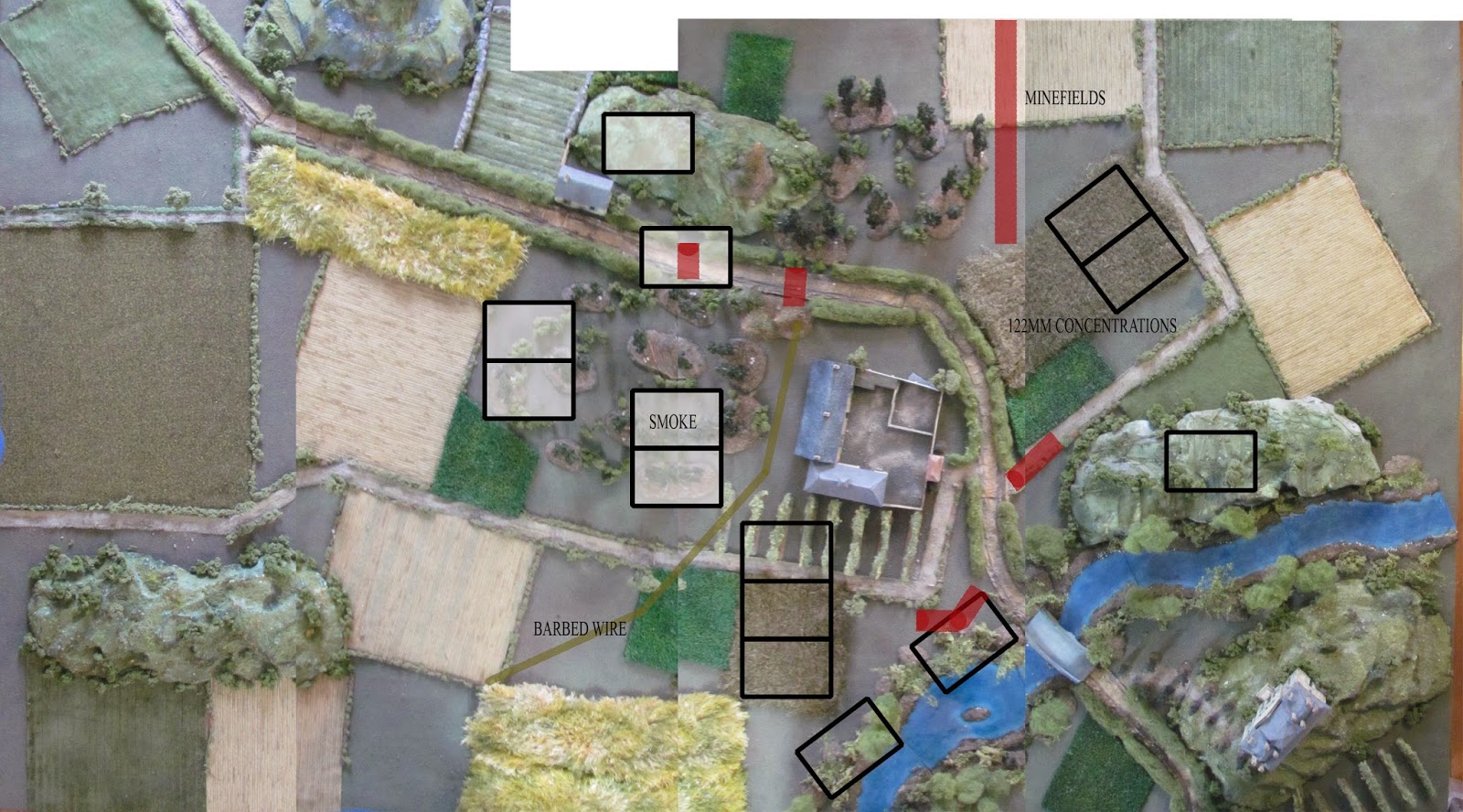 As it turned out the barrage, planned before seeing any German hidden position markers, touched virtually none of the German positions. It fell almost entirely behind their lines (which were well forward) other than a couple of lucky mortar strikes next to the farmhouse which knocked out an 88 and the 20mm Flak. 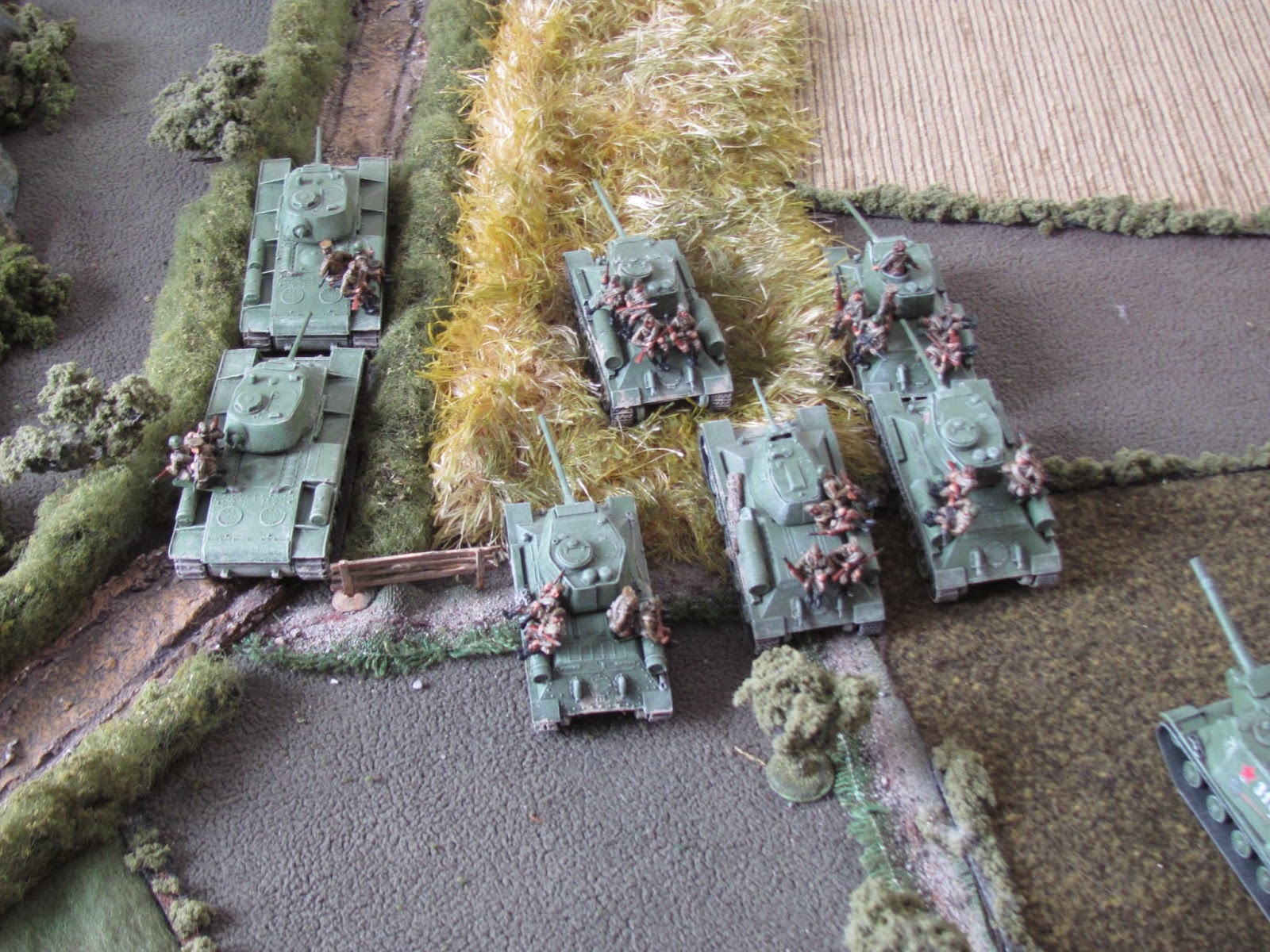 The attack goes in
The Russian armour roars in behind a heavy smoke screen, the KV1's braving the road while the T34's with their tank riders move to an adjacent field to dismount their tank riders. The two ISU's position to provide supporting fire on the near edge of the central woods as enemy positions reveal themselves.
A platoon of T34's also advances to the left, not visible in this photo. 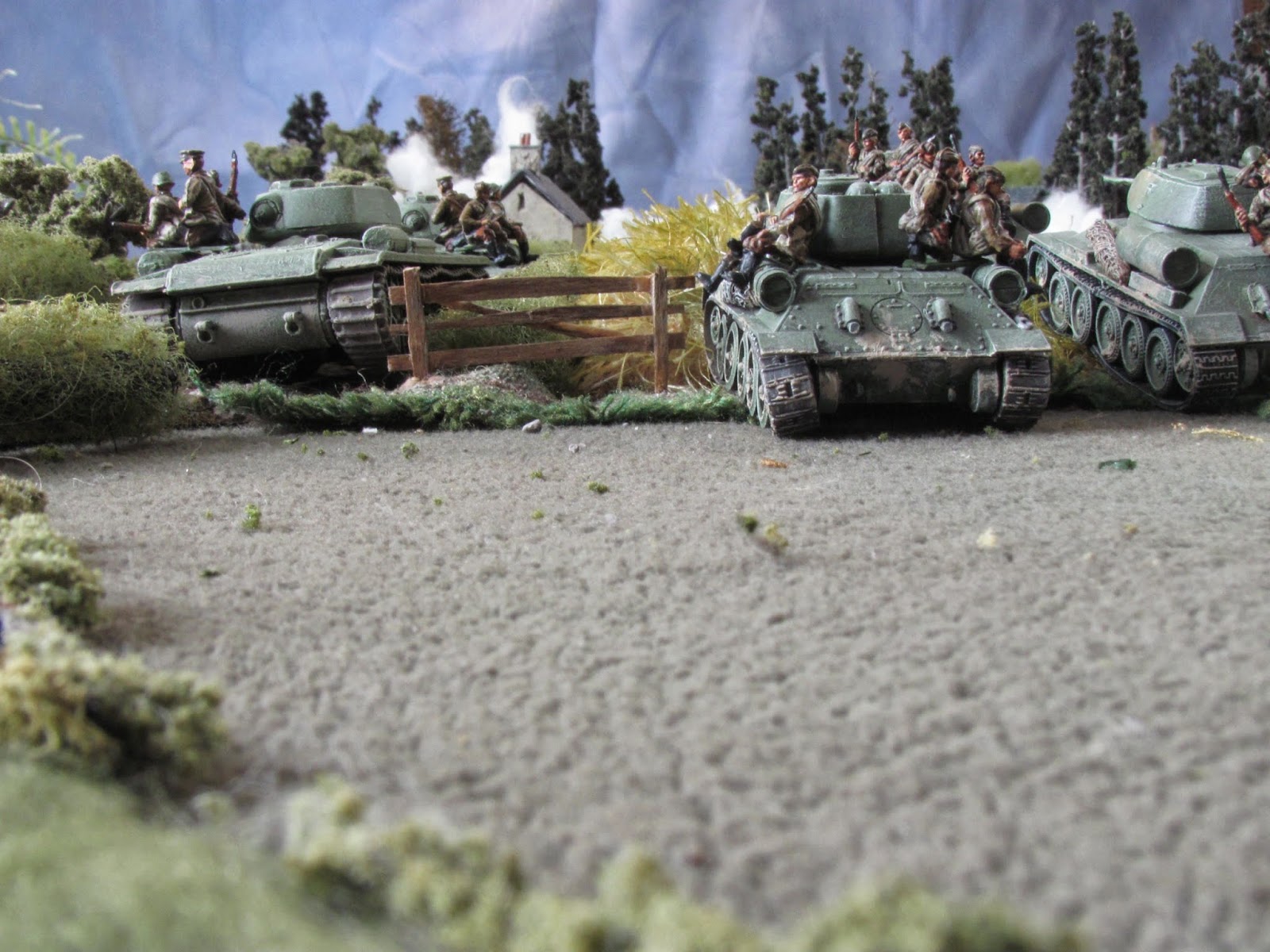 Tank riders
On reaching the field the T34 tank riders dismount into the tall crops under German heavy mortar fire, but escape with only a few disorders and suppressions. 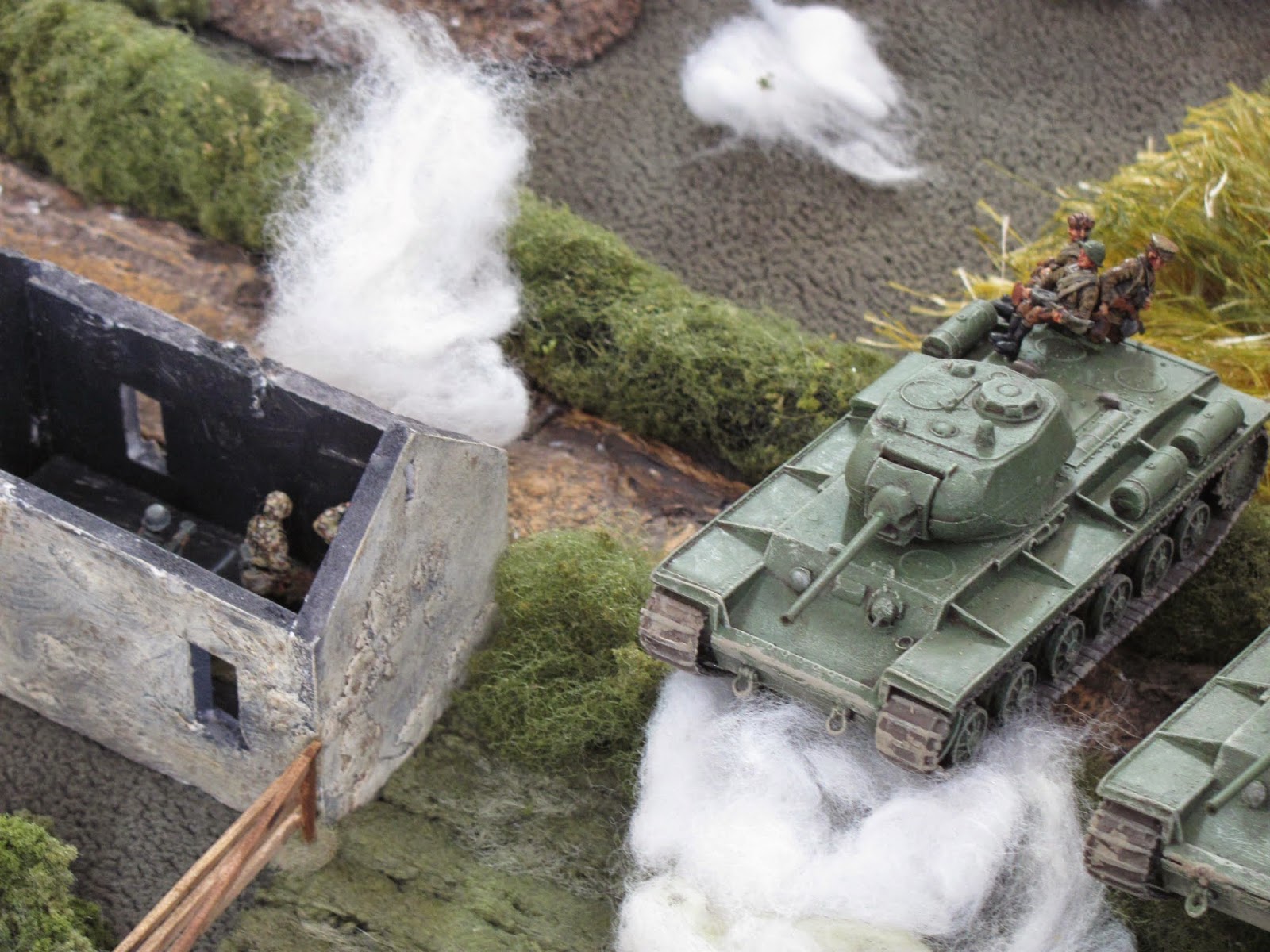 First encounter
Under cover of smoke the KV1's forge down the road, turning to exit by breaching the hedgerow next to a farmhouse. A Panzerfaust fires on them, and suppresses the nearest tank. 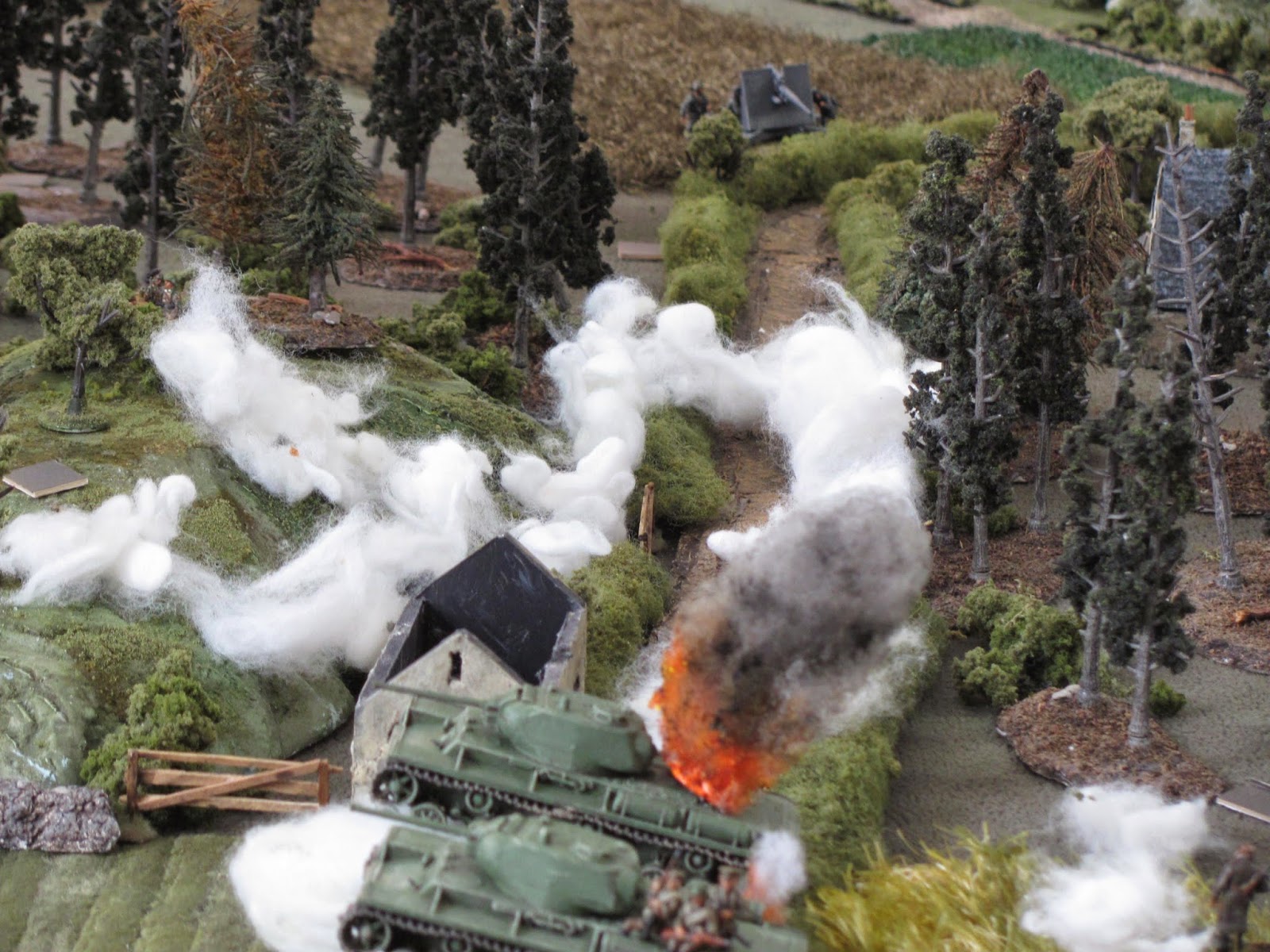 Knocked out!
An 88 reveals itself at the bend in the road, along with a Pak 40 that opens fire from the edge of the woods. One of the KV1's is knocked out and their riders forced to bail out onto the road disordered. 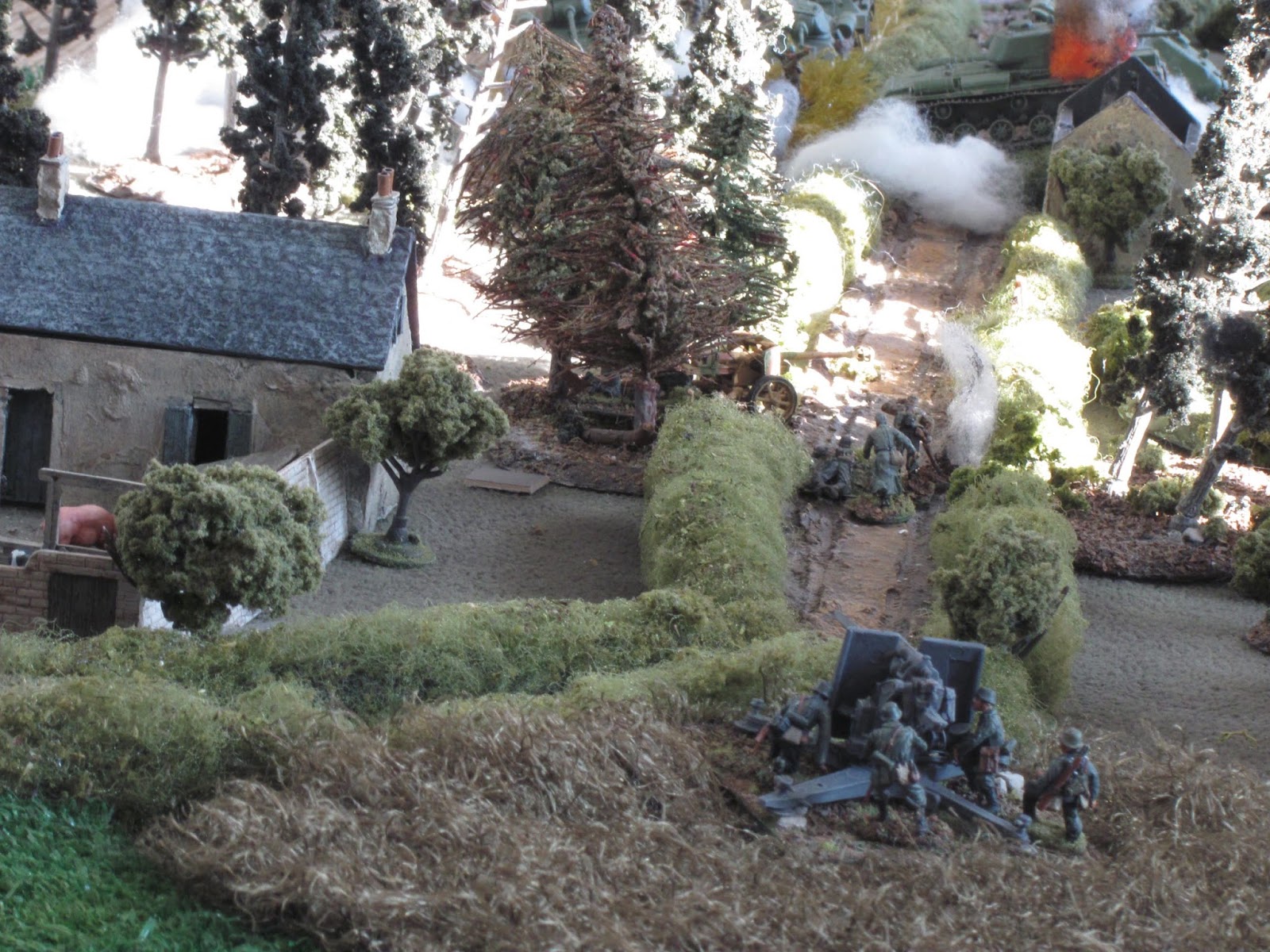 88 in action
View from the 88's position behind a hedgerow, as German infantry sprint up the road towards the Pak 40. 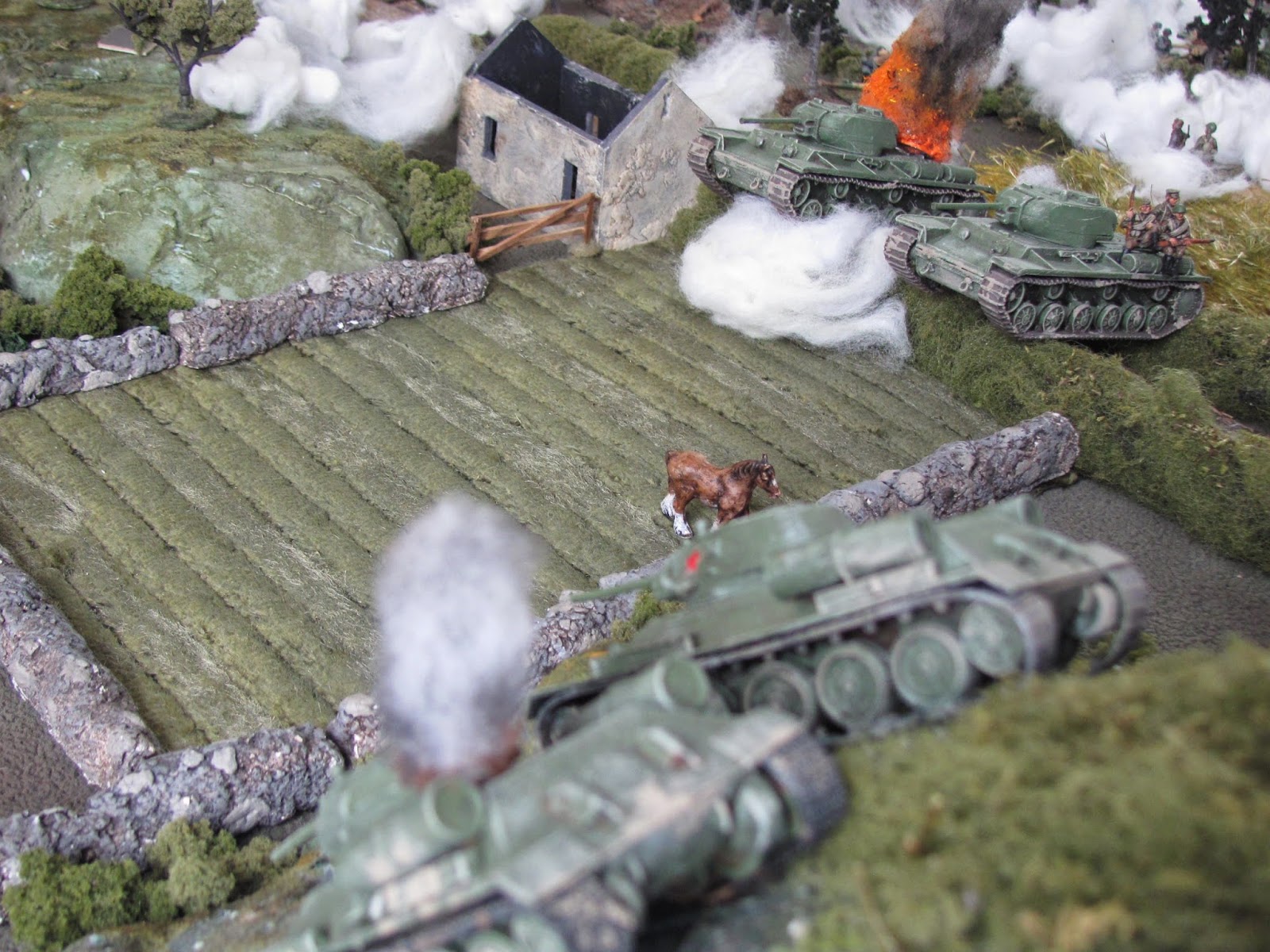 T34's on left flank
A platoon of T34's advance up the left side of the battlefield in what was thought to be a protected line of advance, with plans to join up with the KV1's. However they did not factor in that they would be observed while traversing the hill by the German commander spotting for the off board mortars in the chateau. A devastating concentration comes down on the tanks, suppressing one but more importantly stripping them of their tank riders, knocking out three of the four stands. 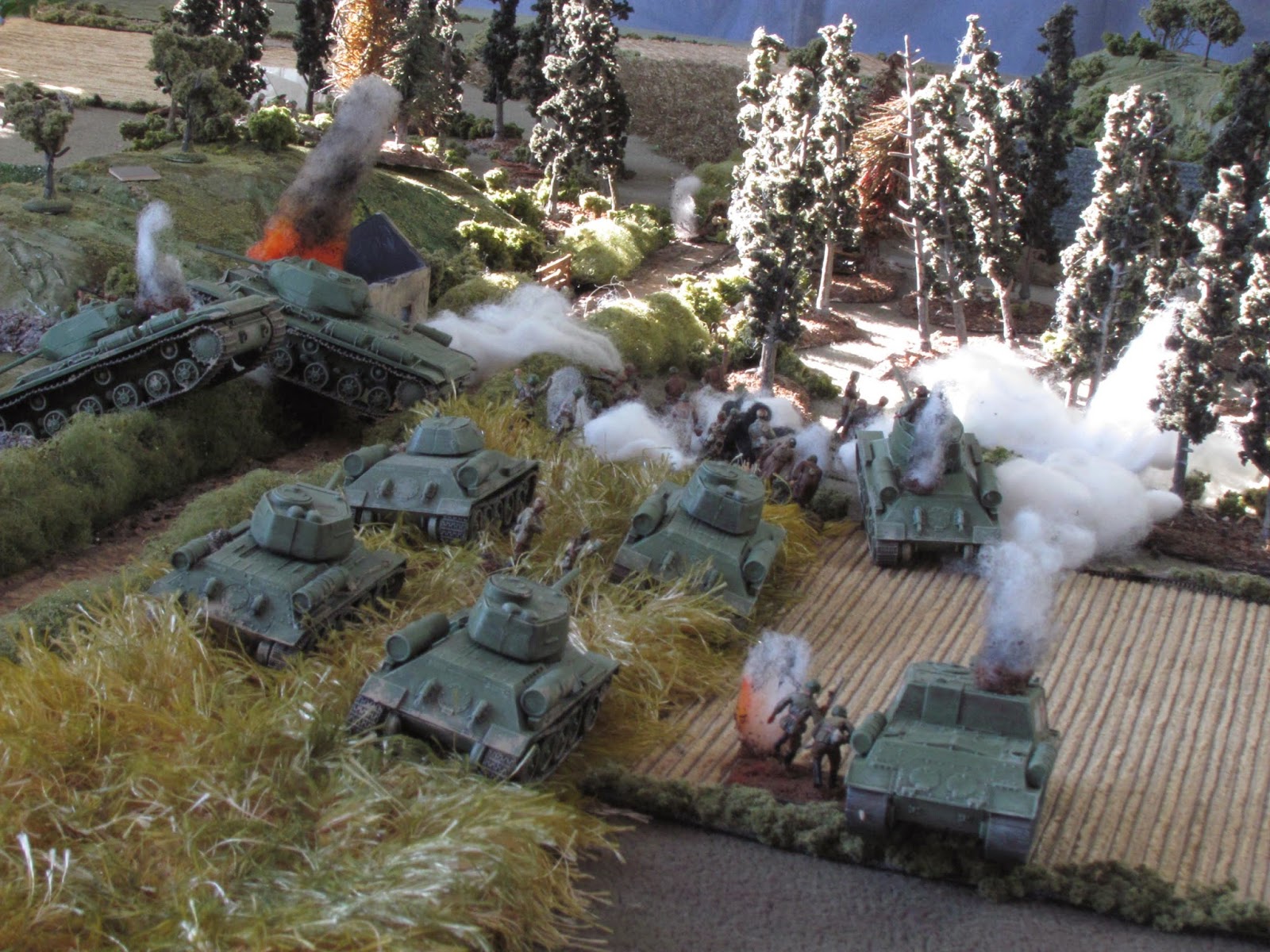 Pak 40 knocked out
More successfully, the centre attack goes in on the woods under cover of more smoke laid on by the Russian off board mortars. The Pak 40 (one of two dug in on the near edge of the woods) is quickly swept aside by close assault by Russian infantry. 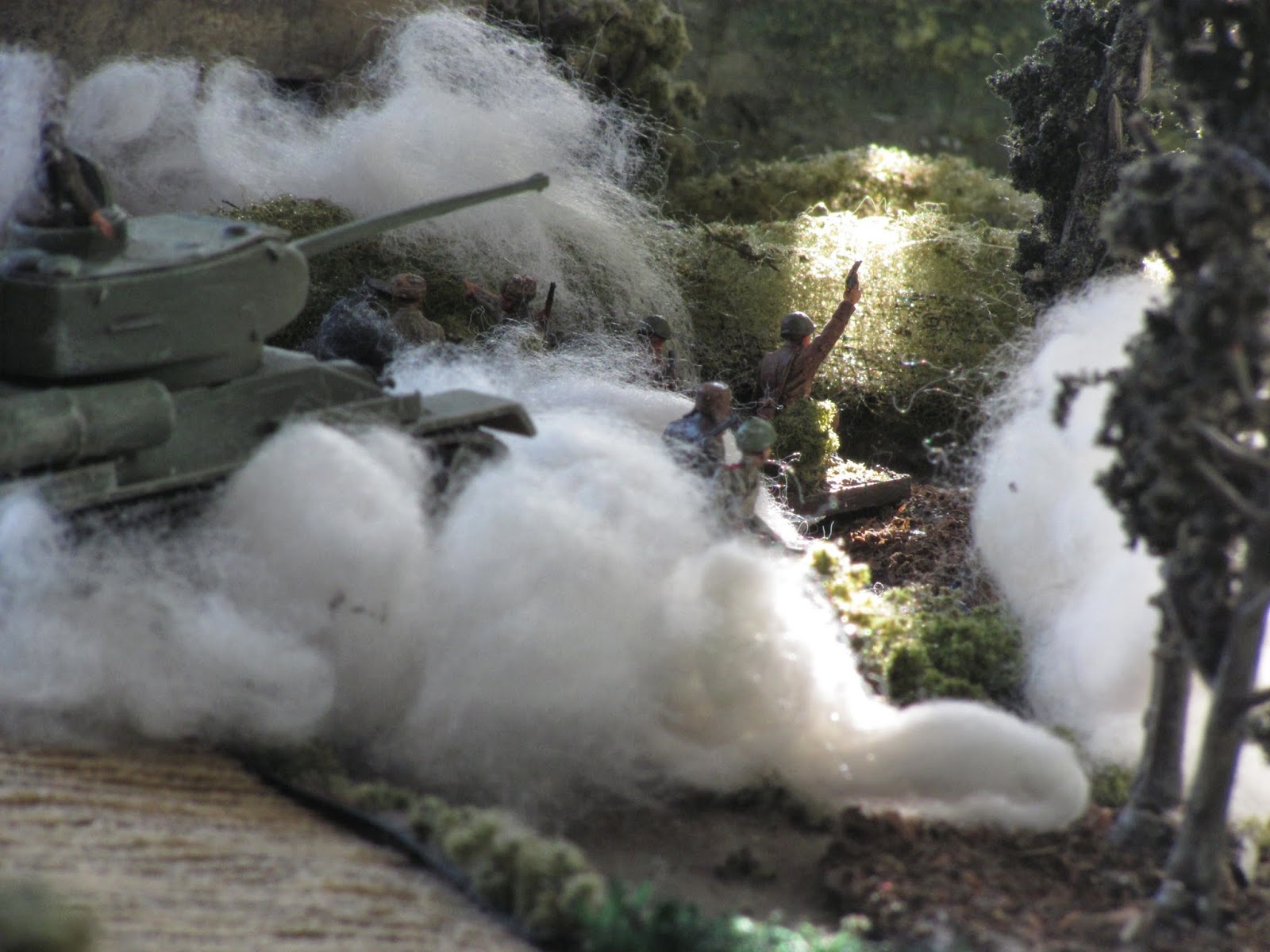 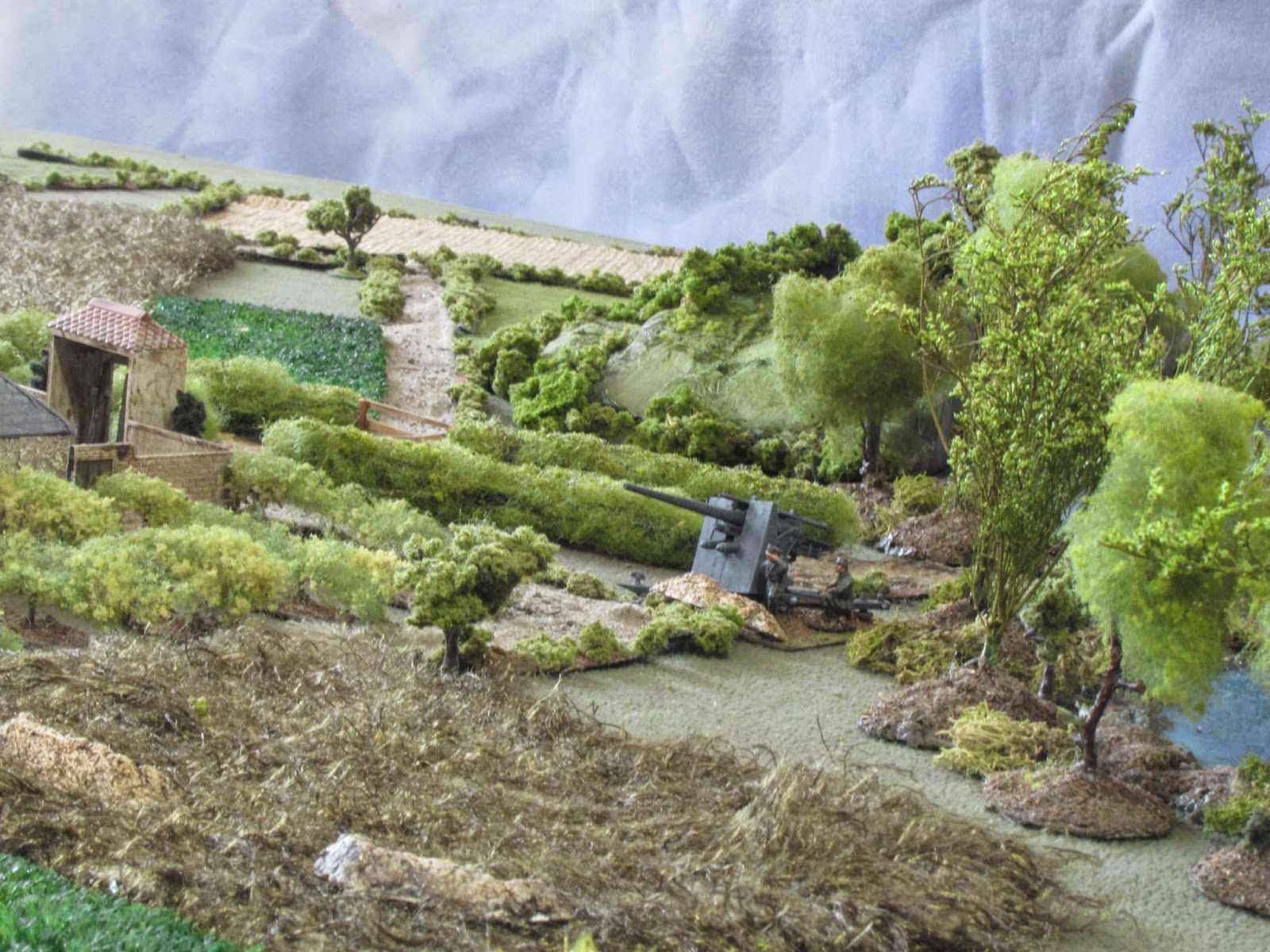 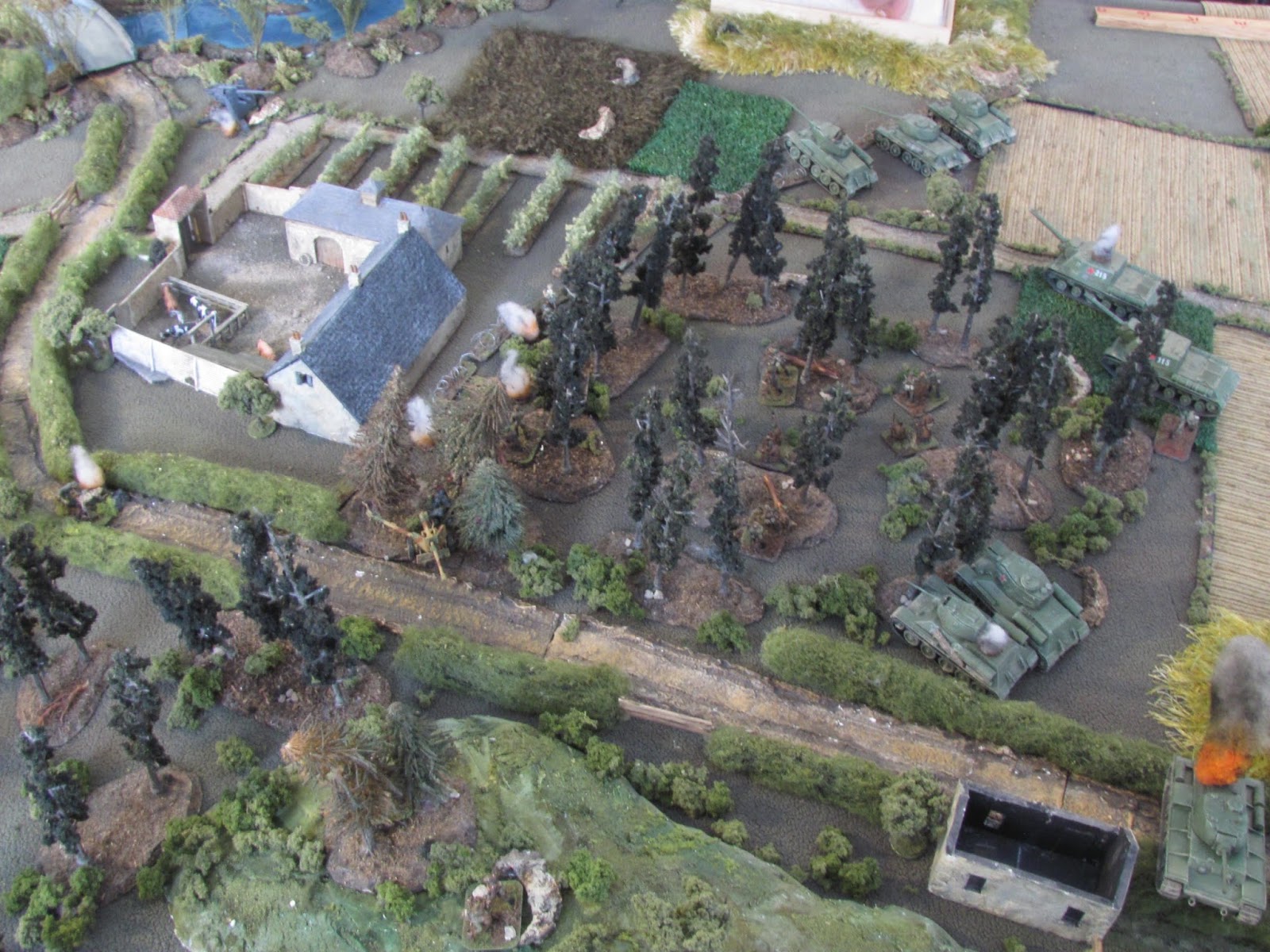 Russians push in and around forest
In this midgame overview you can see the Russian armour and infantry pushing into the forest. Another Pak 40, dug in next to where the ISU 152's are in the upper right, is knocked out by close assault after exchanging shots with the ISU 152's. A hastily formed German blocking line of infantry has panicked at the sight of the Russian armour pushing into the woods and breaks and flees, coming up short against its own line of barbed wire that runs between the farm complex and the woods, cutting off its retreat. This allows pursuing Russian infantry to close and close assault, knocking out all three stands of German infantry. With the central woods more or less secured, the bulk of the T34 company along with the ISU 152's changes direction and rolls around the right flank of the woods, braving the fire of the 88 to breach the line of barbed wire that spans this flank.
The decision to push the tanks noses into the woods proved to be double edged. They provided a target for the German mortars, and as a result the Russians lost two more stands of infantry in collateral damage to mortar fire, but their presence pushed the defenders into their panicked retreat.
In the foreground (bottom of picture) Russian infantry clear out the house and a German 8cm mortar that have been giving them trouble, moving towards the woods on the left side of the road  supported by the platoon of T34's and the remaining KV1 (not visible). 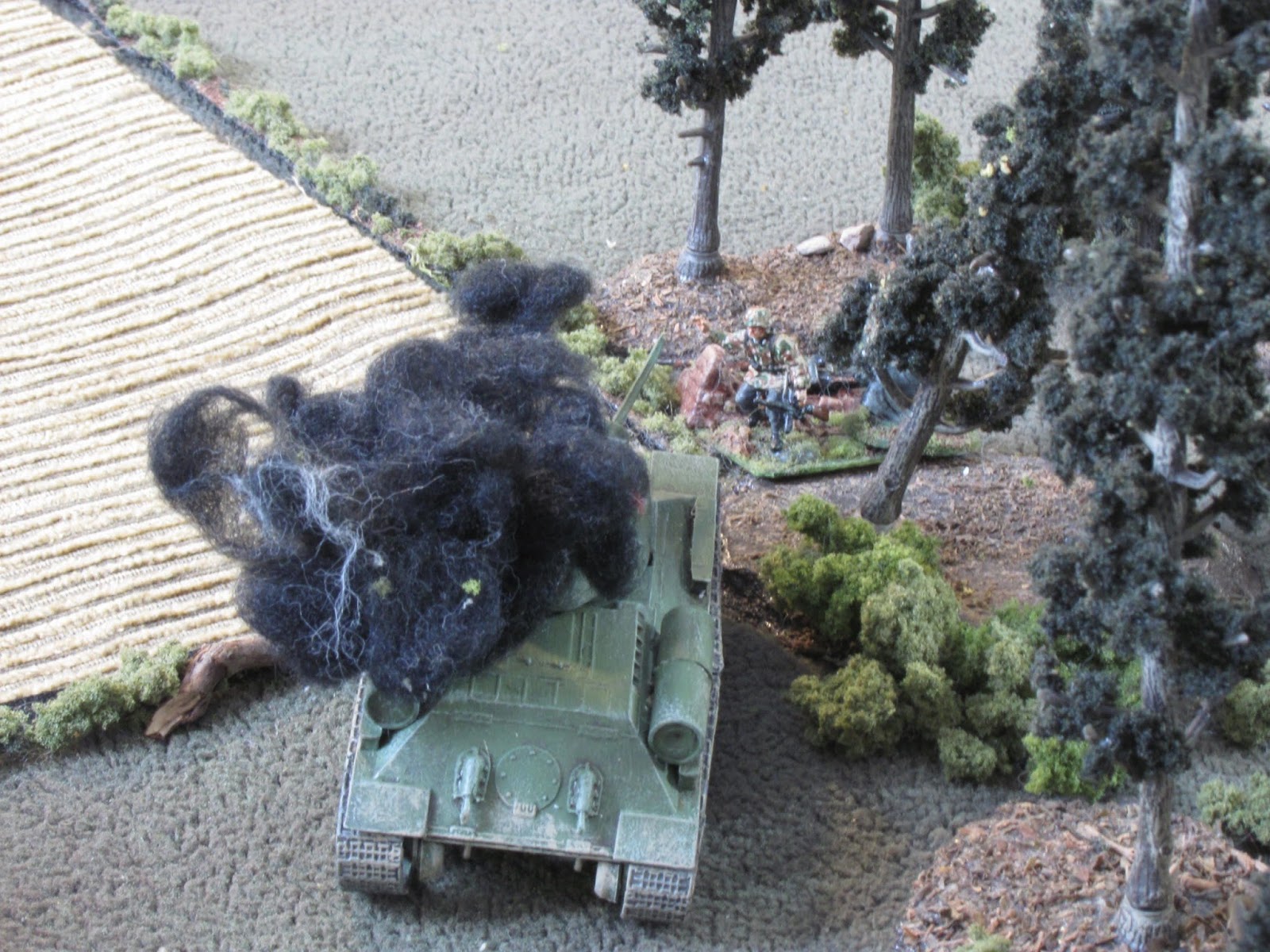 Curiosity kills the cat
The Russians get a bit cocky as a T34 on the left flank rolls over to the edge of the woods to investigate a suspected German position and is brewed up by a Panzerfaust. 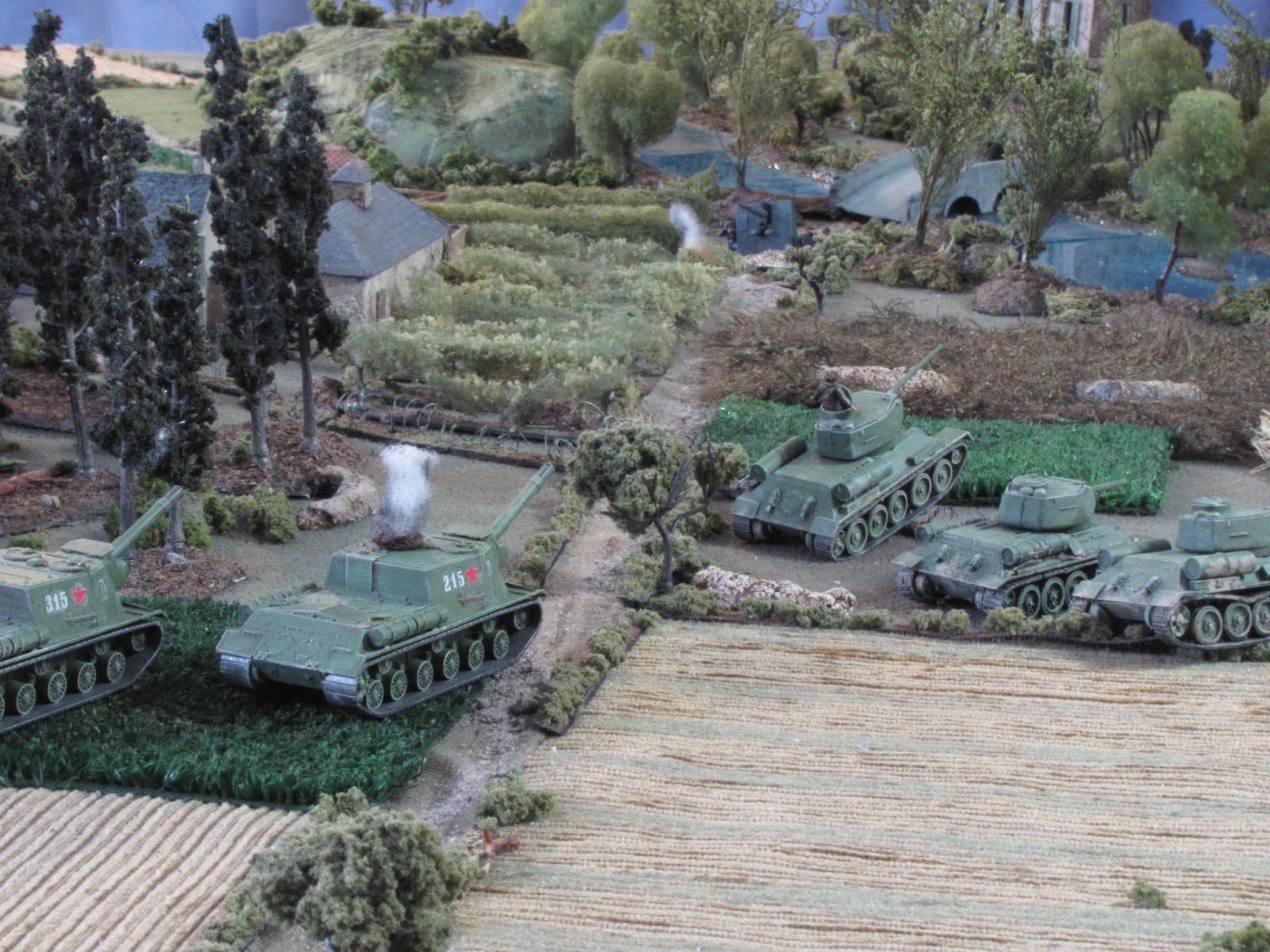 Right flank advances
As the Russian mortars and ISU 152's keep the German 88 on this flank disordered the tanks move in, breaching the German wire. 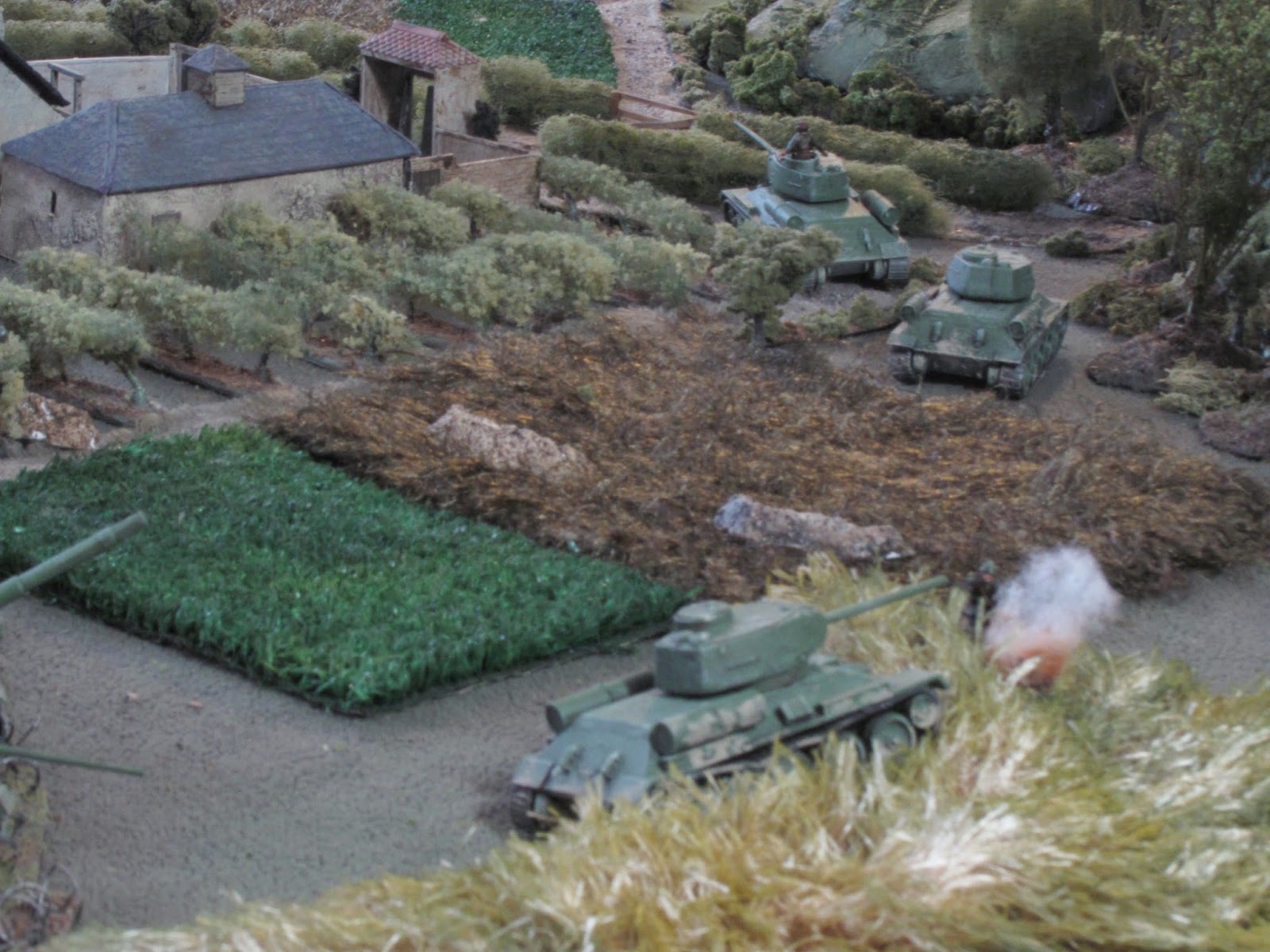 Oh, look, a machinegun nest!
Before the tanks can close a direct hit by the Russian mortars knocks out the 88. In the foreground one of the T34's encounters a disordered German heavy machinegun. Previously this machinegun had called down a devastating strike on the Russian infantry as they emerged from the woods heading towards the farm complex, knocking out two more stands and bringing the total Russian infantry stands destroyed by mortar fire to seven.
Seeing that the machinegun was disordered the tank moves to close assault, knowing that the only die roll that would cause its destruction was a 1 for the Russian and 10 for the German. 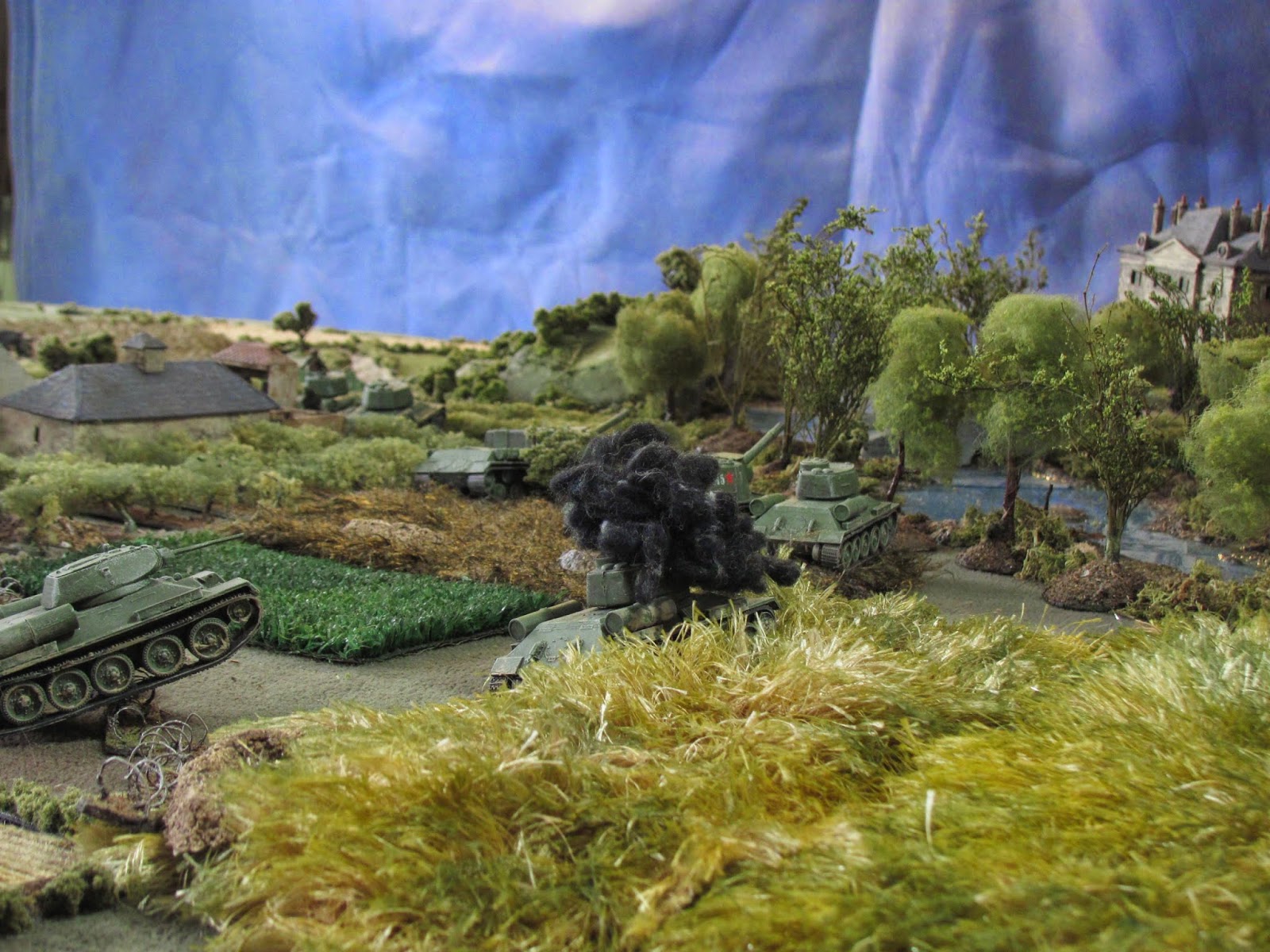 Beat by the long odds
So one more tank knocked out. The machinegun panics and sprints for the river, but fails to make cover before being gunned down by the better part of a company of T34's. 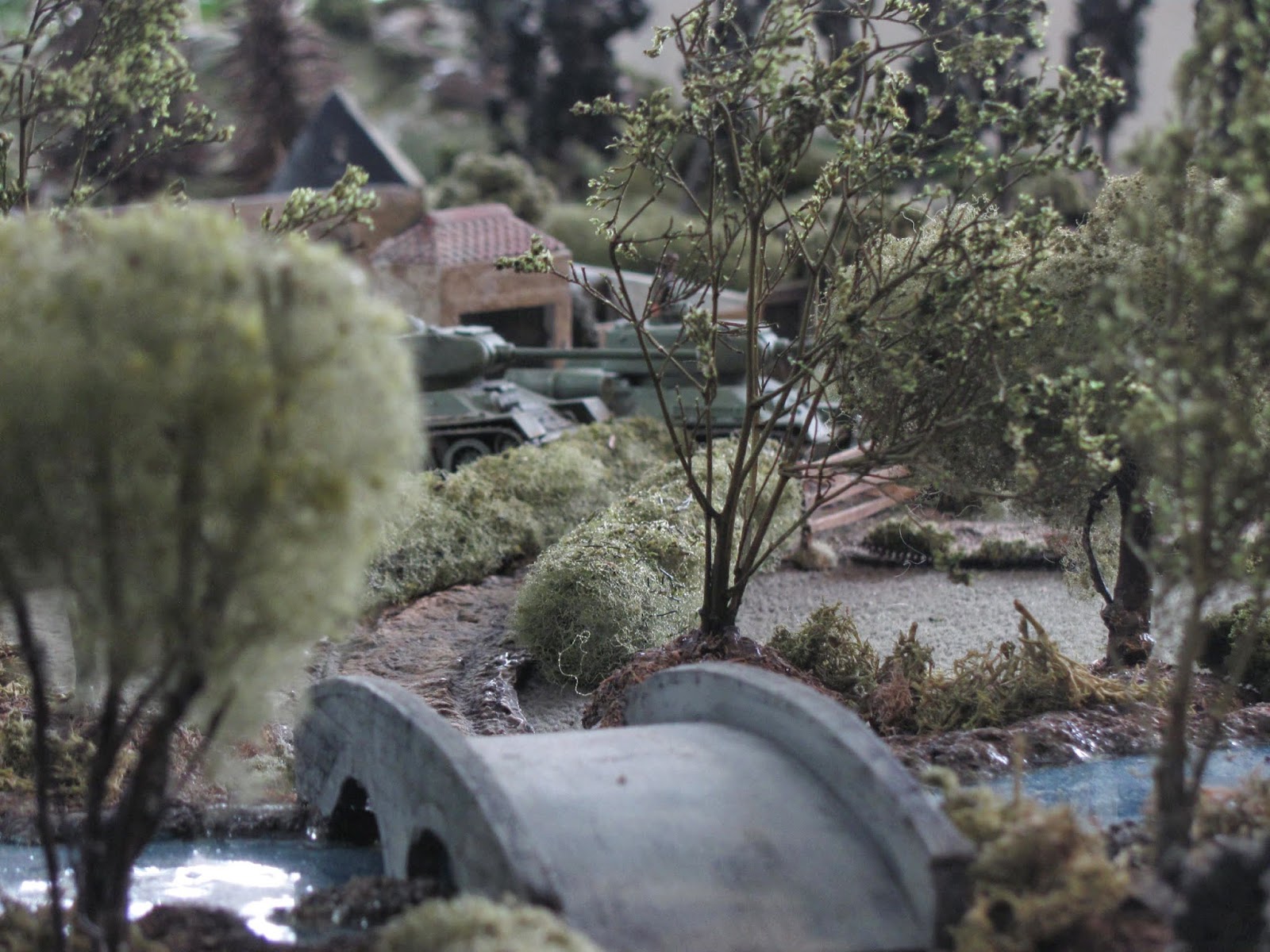 Waiting for the big cats
With almost the entire German infantry company now destroyed, along with all but one of its guns for a loss of three Russian tanks and half its infantry, the T34's take up positions along the road in preparation for the expected German armoured counterattack. Bizarrely, no minefields have yet been encountered despite having penetrated deep into the German defences. 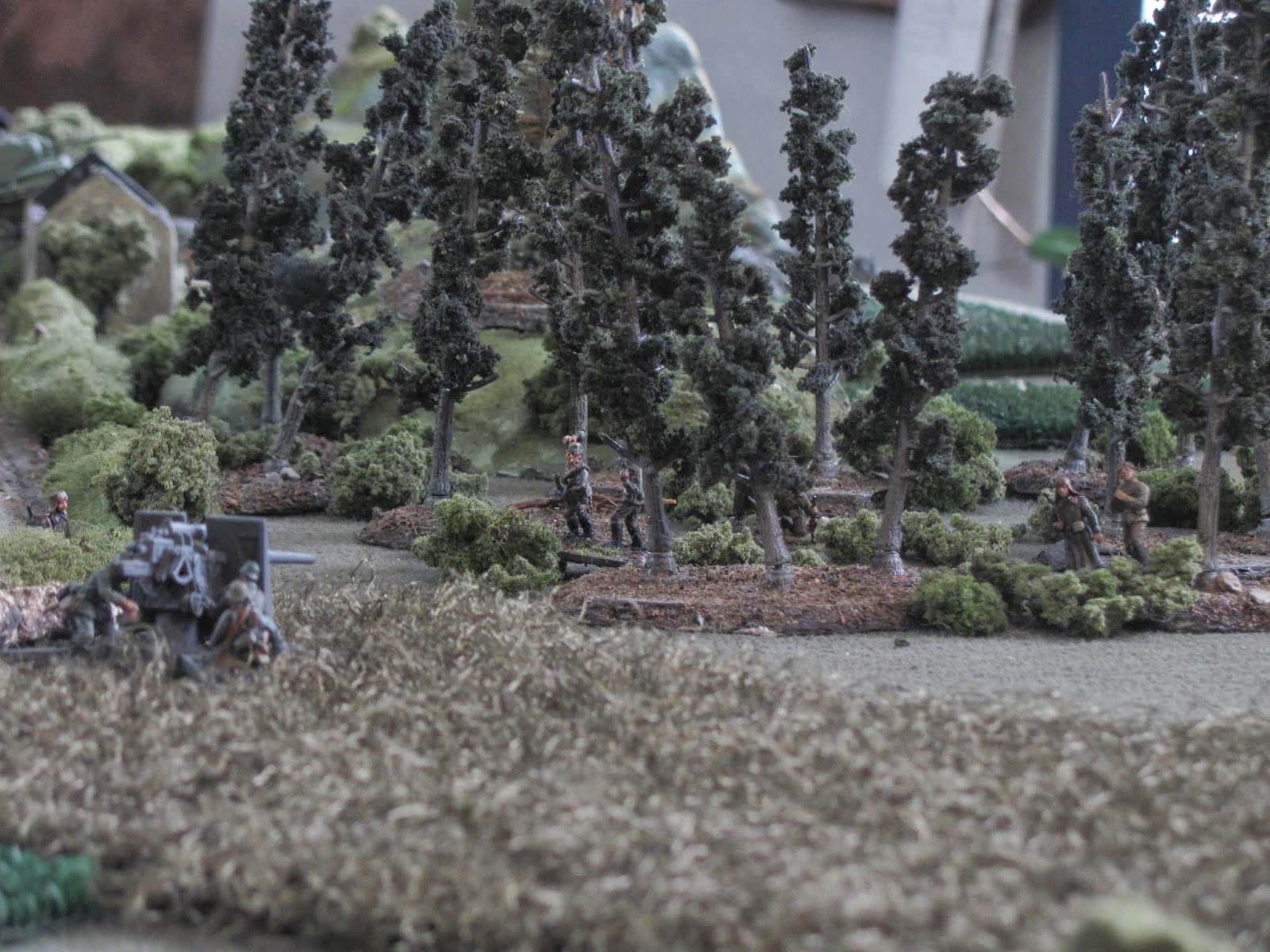 Closing in on the last gun
Meanwhile, on the left flank Russian infantry begin to close in on the remaining 88, both from the woods and the farm complex. One Russian stand is knocked out as it ventures too close to the wood edge as the rest prepare for a final assault on the remaining German position. 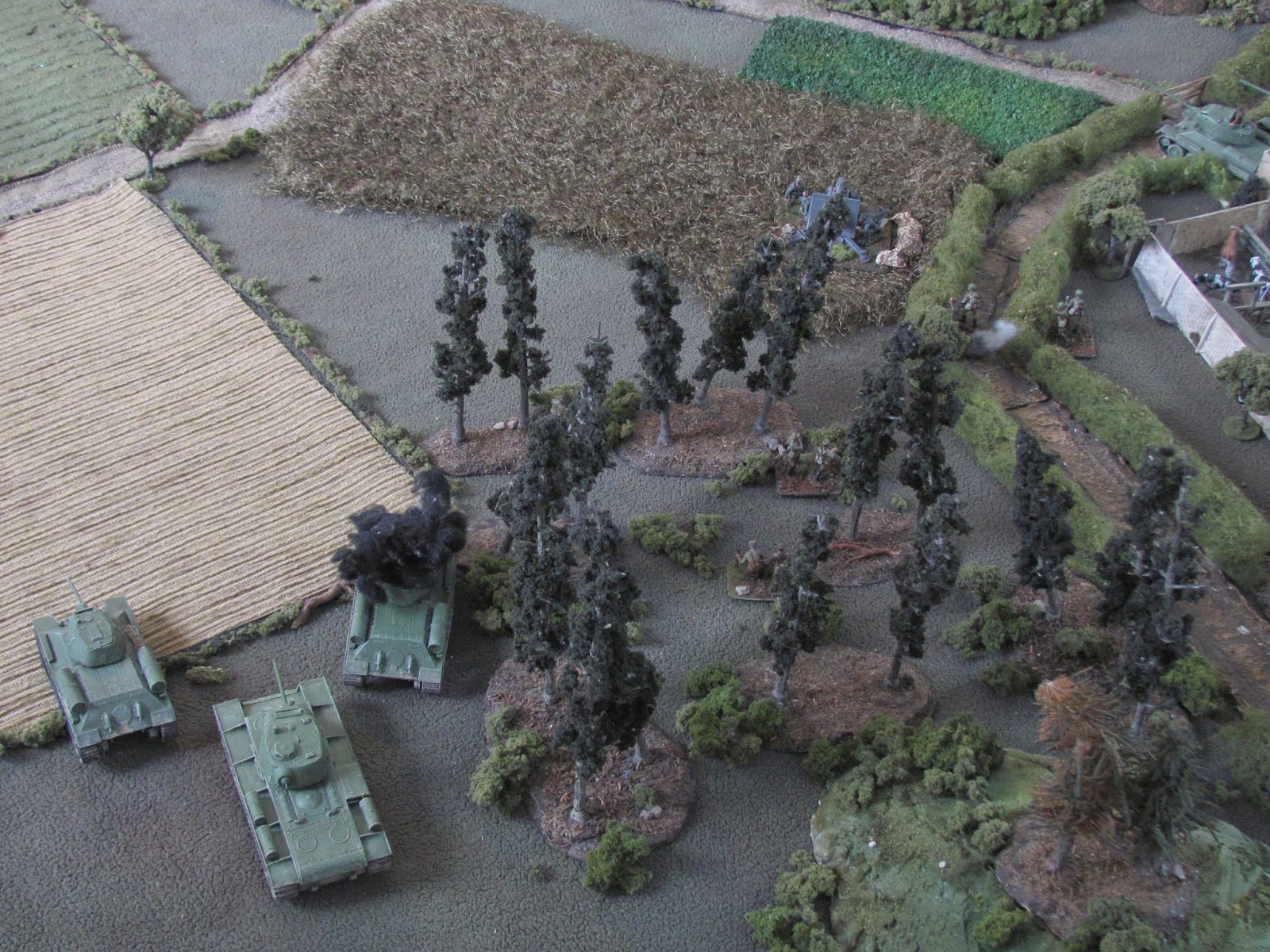 Overview of left flank
The two remaining Russian tanks attempt to go hull down behind the woods, as they wait for the arrival of the German armour. Russian infantry move in on the 88. 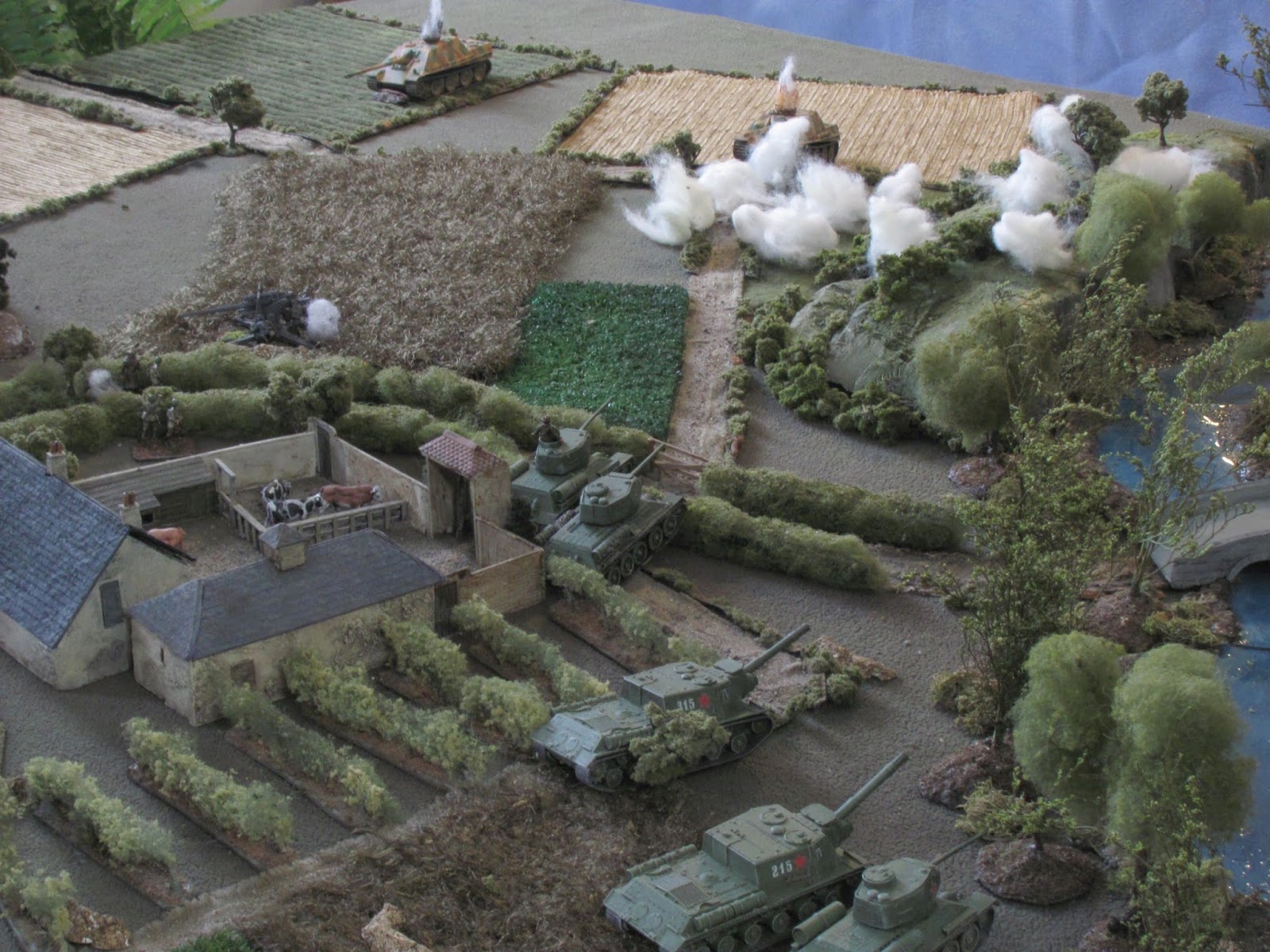 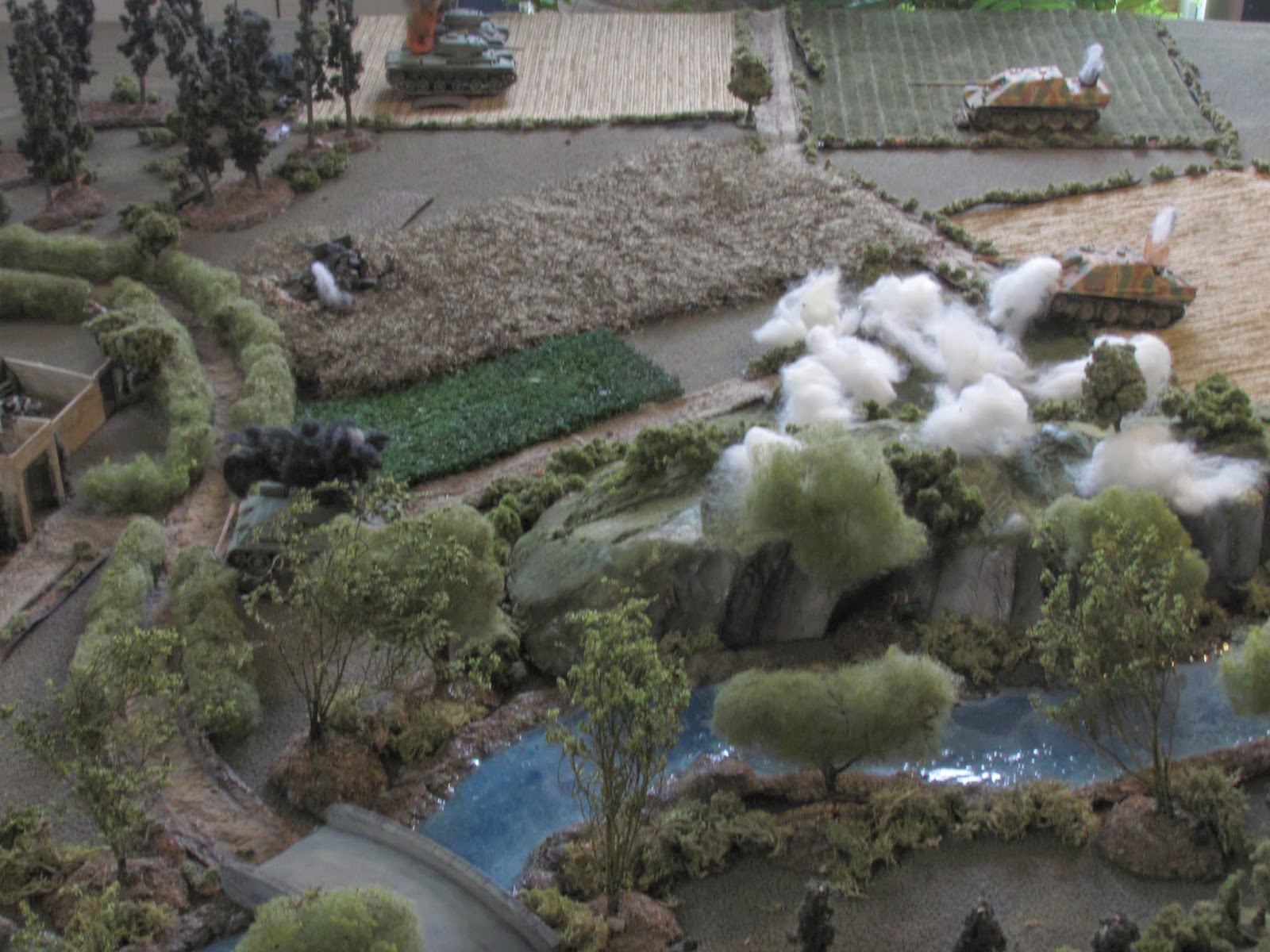 Oh, so that's where the minefields are!
The final Russian assault never materializes. The infantry, now reduced to below half their original number, fail their morale roll and panic in the face of the arrival of the German armour. The KV1 and T34 on the left flank roll forward and are blown up on the until now elusive minefields while another T34, moving forward to close assault, is also blown up on a minefield blocking the entrance to the lane (three consecutive rolls of 3 or less, 4 if you count the failed morale roll for the infantry!) 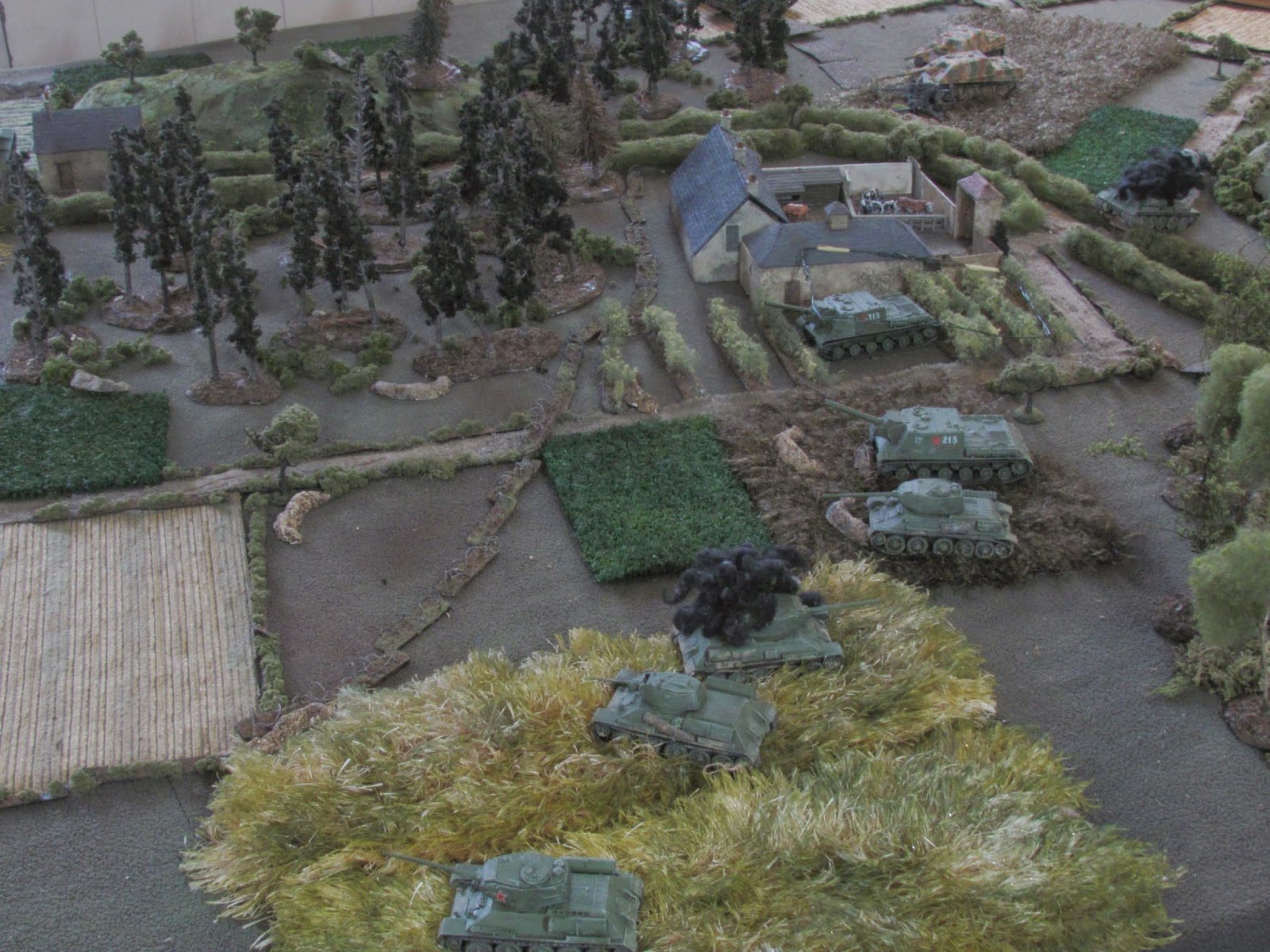 Game end
With their way now blocked by minefields, the other Russian tanks fall back to regroup as the Jagdpanthers advance on the far flank.
At this point the game has run its allotted course of 10 turns, and despite the German minefields' toll on the last round, the Russians can claim victory, having inflicted roughly equal damage to the Germans, who thus failed achieving their two to one ratio necessary in order to win.
As stated earlier, this was a learning scenario for a new player who was playing the defence. Afterwards he freely admitted that he had not understood the effectiveness of the minefields and barbed wire, which is why he placed so much of his defence forward of these obstacles, which allowed the Russians to use their armour and infantry superiority to great advantage. Not a mistake he is likely to repeat!!