Over the summer we put on a large multi-player game, bigger than what can usually be accommodated in an afternoon of play. Gaming over two days at a rented hall, we still only partially completed Mark Davies' Battlefront WWII scenario, The Pompadour's Revenge. More frustratingly, it didn't conclude decisively (in fact, just as things were getting interesting) and ever since then I and the other principal, Phong Nguyen-Ho, have been itching to give it another crack, picking up where we left off.
We will be doing just that this weekend. But as it is now pretty obvious on which part of the terrain the battle will be fought I have been able to recreate a smaller 6.5' X 5' playing area in my studio. Better, having all week to create this undulating and densely terrained board, I've been able to more closely match Mark's original map, largely due to a new grid technique that I'm employing.
Not being a fan of permanent terrain, or to be more precise, finding that it doesn't work well for me mostly because it is pretty inflexible as far as storage goes and I'm interested in recreating historic battlefields, this entire board is modular. It took quite a while to set up but I find that is part of the pleasure of gaming. So I have decided to document it, just in case others are interested in at least one way of recreating an historical battlefield from a map. 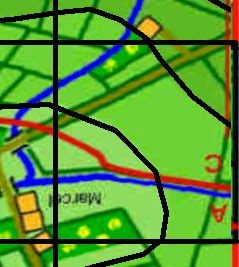 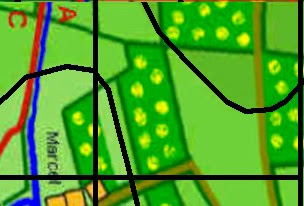