Last weekend we got around to playing the second of the Leros Landing scenarios, written by Nigel Perry for the Battlefront WWII ruleset. This game, played in 20 mm on a 4'X3' board was about as close as you get to a skirmish game in Battlefront, with a company per side and a second company for the British in reserve. Since posting it has been pointed out to me that the German Coastal Raiding company were actually Kriegsmarine, not paras! My apologies to the scenario designers for not reading their orbats carefully enough. 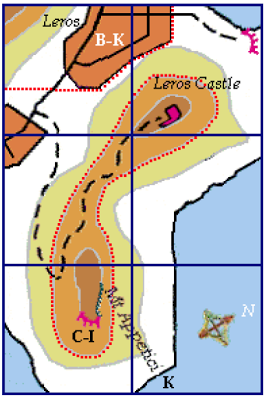 It is based on the fighting for the isle of Leros Island (see Leros Landing above) on November 12th, 1943. While elements of the German fallschirmjaeger force battled it out for Germano, and Rachi Ridge north of Leros , a company of Kriegsmarines, men of Kustenjaeger Abteilung Brandenburg, fought for control of the high ground south of Leros. This scenario picks up the action later in the day, after the parachute landings and initial skirmishes between the Germans and the defending British. 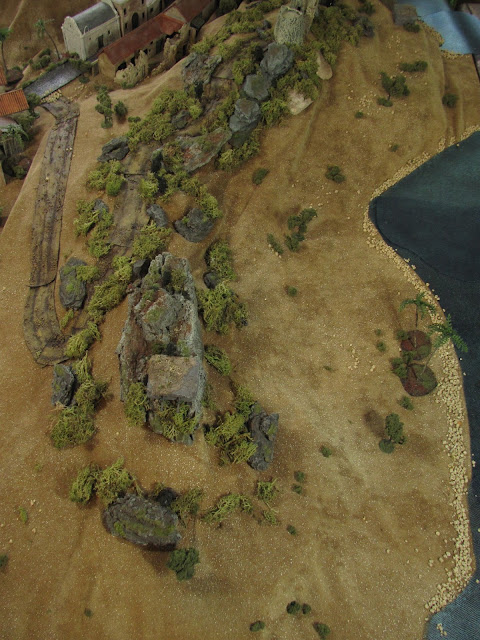 The two objectives: Mt. Appetici with its coastal battery on the high ground towards the bottom of the picture with Leros Castle just visible above Leros at the top. C Company of the Royal Irish Fusiliers defends the castle with a platoon of infantry while the remainder of the company, bolstered by a Vickers and Bofors AA section, is dug in around Mt. Appetici. B Company of the Royal West Kents is in reserve, positioned in the town of Leros and, to reflect the confused nature of the British defence, unable to leave that position until “released”. 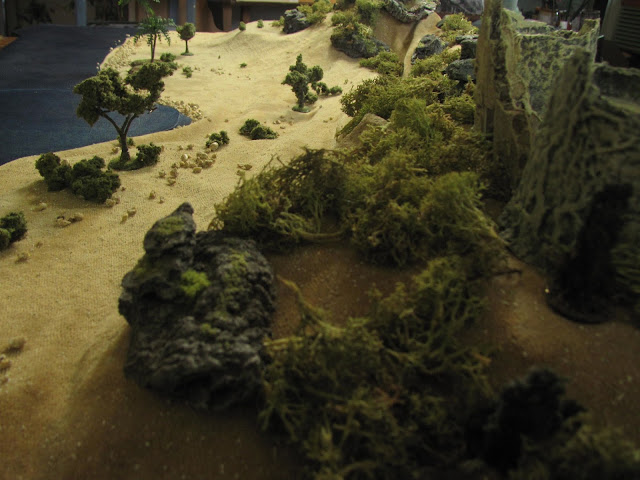 2. View down the east side of the high ground from Leros Castle 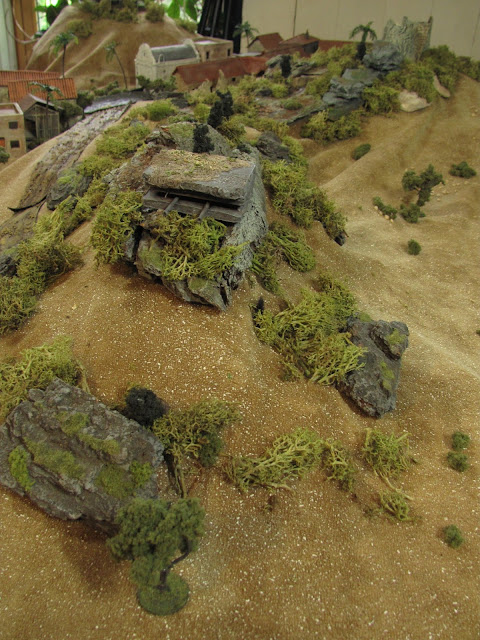 3. The second objective, the coastal battery on Mt. Appetici. 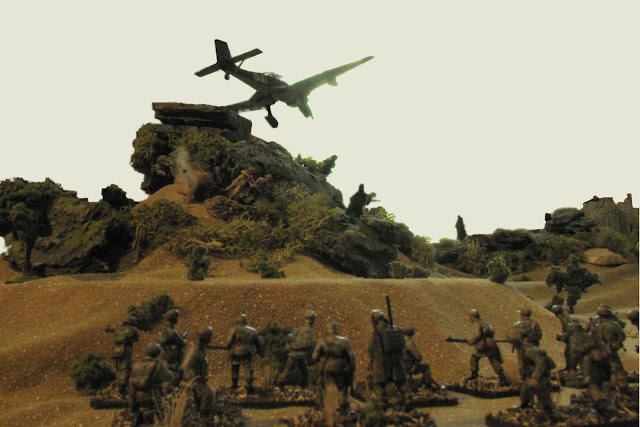 The Germans form up at the base of Mt. Appetici in preparation for their attack while Stukas attack the Royal Irish positions. Only company strength, the Germans concentrate their attack on the coastal battery. 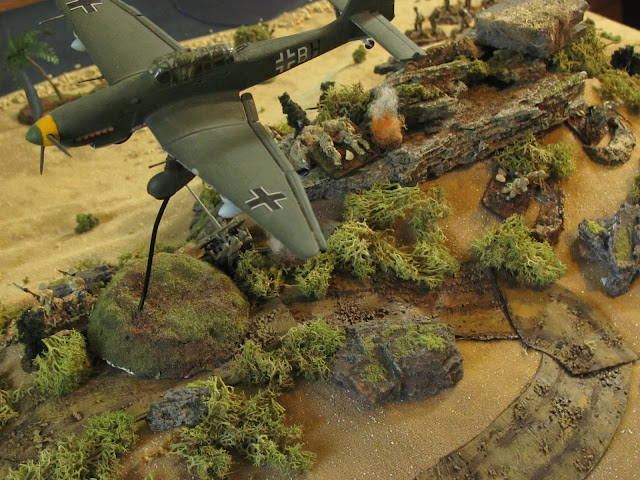 A successful strafing run knocks out the Vickers section and disorders many of the defenders, forcing their heads down as the Germans make their way up the slope. 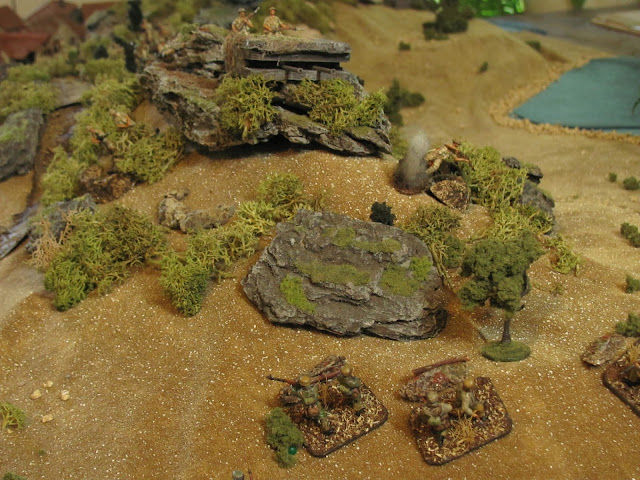 Preserving their precious resources the Germans cautiously work their way around the flank of Mt. Appetici, taking advantage of the cover on the slopes (this was modelled in the scenario by making the terrain open but allowing improved positions to be gained by expending an action). 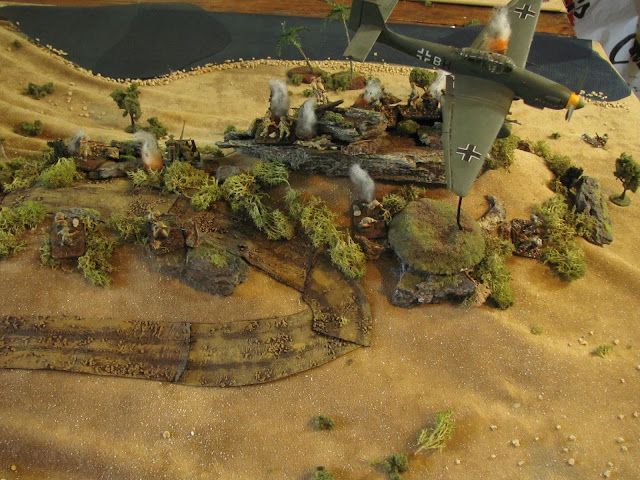 With relatively light losses the Germans force the defenders out of their prepared positions and seize the objective while the Stukas return to the skies after an initial absence and resume their attacks on the defenders. The Royal Irish platoon positioned in Leros Castle leave the castle and move up along with the company commander to bolster the sagging defences in an attempt to retake the objective. 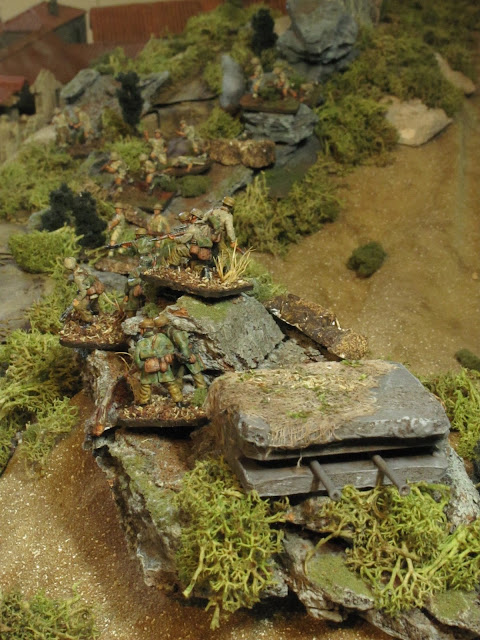 With the help of air power the Germans, now reduced to a bit over half strength, hold off the counter attack from the Royal Irish, eliminating this threat in time to consolidate on the objective before the West Kents arrive on the scene.

9. B Co. Royal West Kents advance on battery from Leros

Finally “released” from their positions in Leros, the British reserve force, B Co. of the West Kents, move cautiously along either side of the road running along the ridge, keeping to the cover but having their advance slowed by continual strafing attacks by the Stukas. They arrive at the battle only to find that the Royal Irish have been decimated. 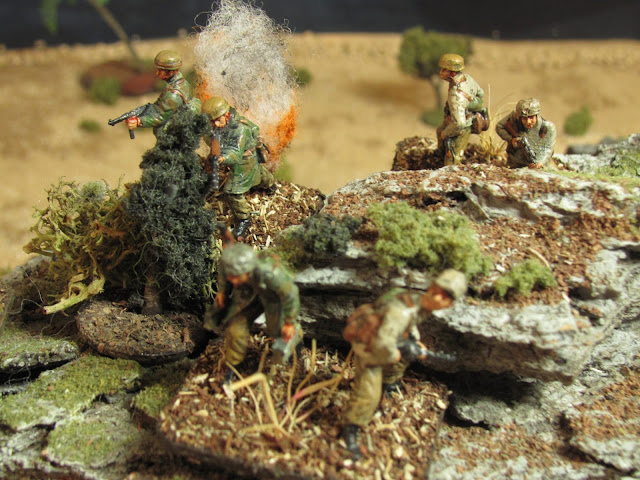 With their numbers reduced and a fresh British company now renewing the attack, the Germans reject any hope of taking both objectives and dig in around the battery. 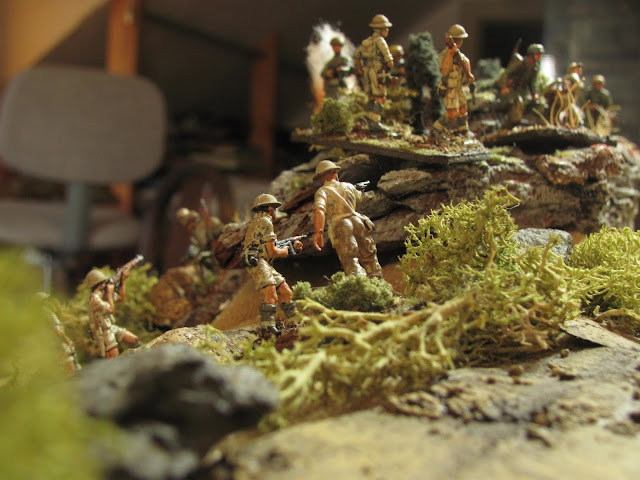 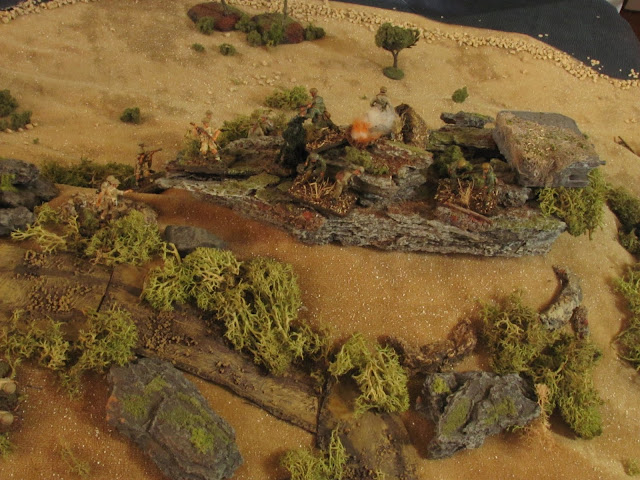 But to no avail. The elite Germans, dug in and with commanding fields of fire from the high ground, are impossible to dislodge.

Victory conditions were determined by the sum total of the two scenarios, and with the British at the end holding only three of the six objectives (Leros Castle, the town of Quaranta and Mt. Meraviglia) the Germans could claim a minor victory. The historical result, interestingly enough, concluded with the Germans also achieving a minor victory, holding Mt. Appetici, Germano Hill and Rachi Ridge by the end of the day's fighting.