We played Nigel Perry's excellent scenario, Second Time Lucky, written for the Battlefront WWII rule set and based on the German paratroop attack on the isle of Leros on November 12th, 1943. An earlier attempt at taking the island had ended in fiasco, but later in the day German Fallschirmjaegers were dropped on the island and managed to achieve enough success that the invasion of the island went ahead and was eventually successful.
The scenario is one of two based on the parachute landings. We hope to play the second scenario in the future. The dynamics of the game were interesting as the Germans had specific objectives to seize with full capacity to operate as they saw fit, but tended to be outnumbered by the defenders. However they were able to move relatively unimpeded from their drop zone while the British had serious restrictions placed on their ability to respond. We opted for shortening the game to 12 turns, as suggested, and this seemed to work well as it reduced the advantages the British had if the game had gone on longer. It was played in 20mm on a 4.5' X 7.5' board. 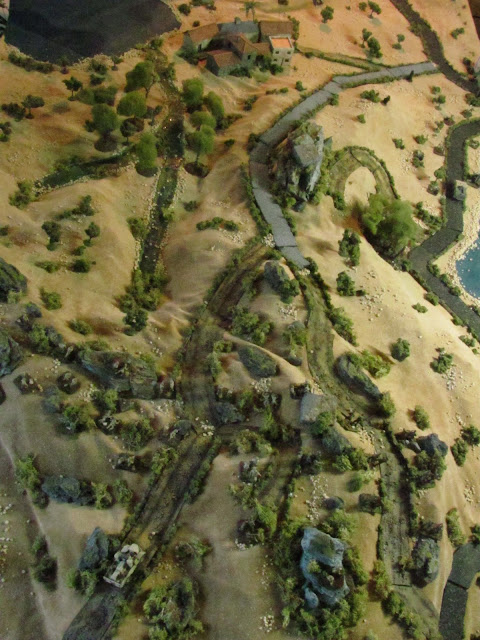 The British set up first and then the Germans chose their drop zone. All units were placed on table as aerial recon had previously pinpointed the placement of the British positions. The four objecives in the battle were: Germano Hill (just out of the picture at top), Quaranta (just off picture to right top), the coastal battery on Raahi Ridge (center of picture) and the peak of Mt. Meraviglia (rocky outcropping center bottom). 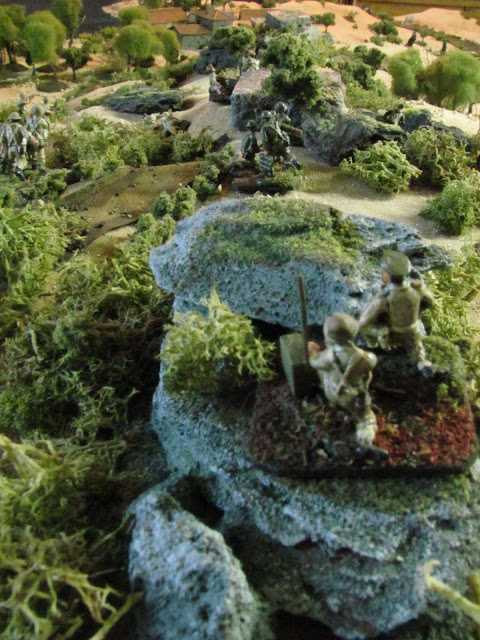 The British FOO on the peak of Mt. Meraviglia had an ideal view of virtually all the battlefield. He could spot down both sides of Raahi Ridge with a clear view of Germano Hill, and the villages of Constantino and Quaranta. The British mortars were placed nearby with a similar line of sight. 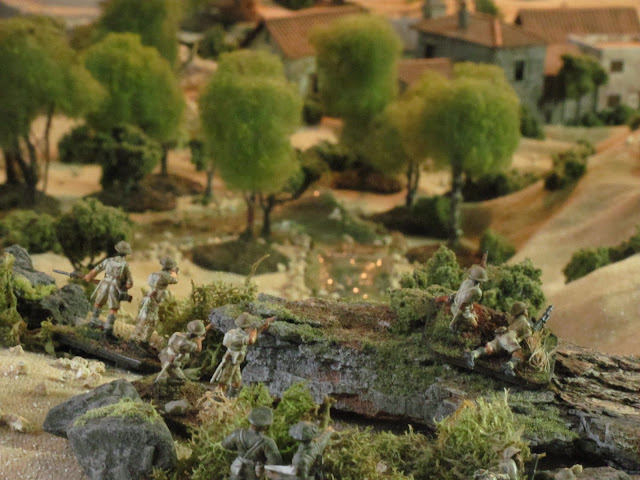 Carrier platoon on the mountain

The carrier platooon and B Company were positioned on the spur running west from the peak, but not dug in, giving them free reign to advance once their units were released. 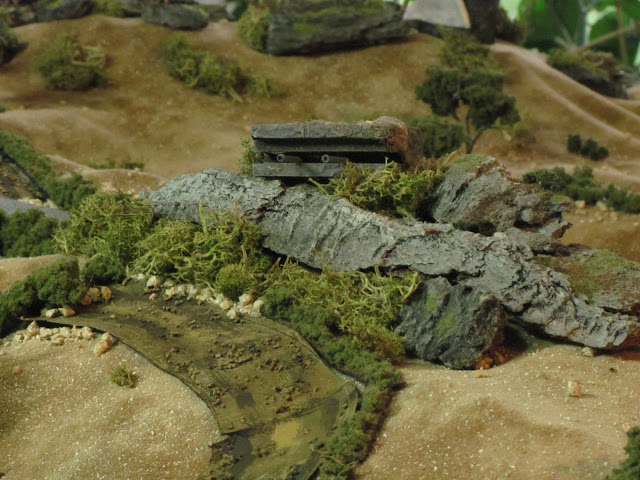 The coastal battery on Raahi Ridge

On the high ground on Raahi Ridge was positioned the coastal battery which became the focus of the most furious fighting during the battle. 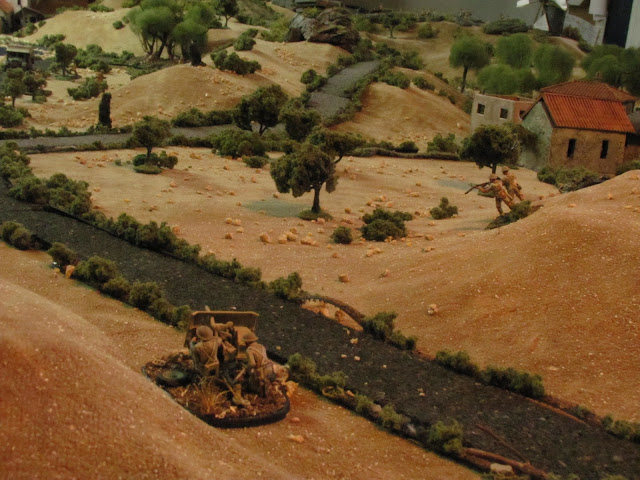 D Company, reinforced by one of the two 2 pdrs. began dug in around Germano Hill and in the forest next to the sea. The British commander opted for a “prepared defence” which meant the unit could start dug in but could not leave its deployment zone. At least two of the platoons (six units) had to begin the battle within 3 inches and facing the sea as their primary role was to repel a seaborne invasion. 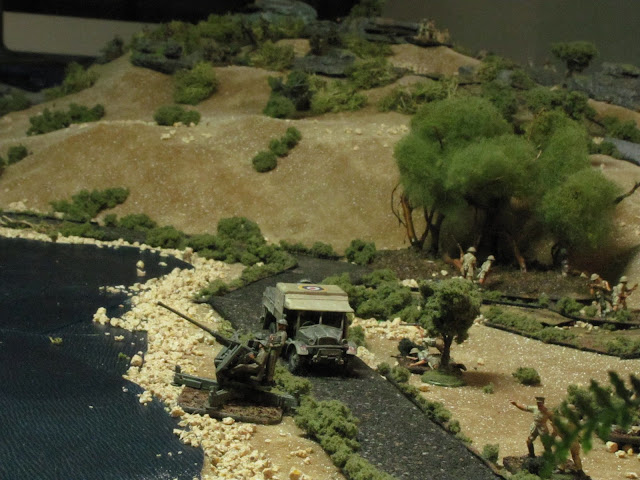 A Company dug in along the east shore

Bolstered by AA assets, A Company also chose a “prepared defence” which allowed them to dig in. Like D Comapny, their primary role was to repel any seaborne invasion as well as defend Quadrata. The British commander chose the “prepared defence” as there was little cover here and he was afraid they would be devestated by any Stuka and mortar attacks. As it turned out the German commander chose to ignore this objective, which meant A Company stayed out of the fray, resorting to the occasional pot shot at any Germans that ventured over the ridge line but unable to move from their deployment zone and help in repelling the German attackers – a crucial and frutrating situation! 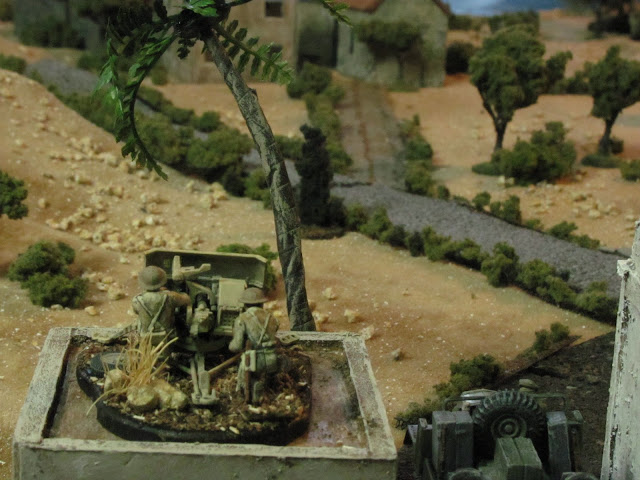 With a view over to Constantino this gun never fired a shot in the battle, waiting for an attack that never came. 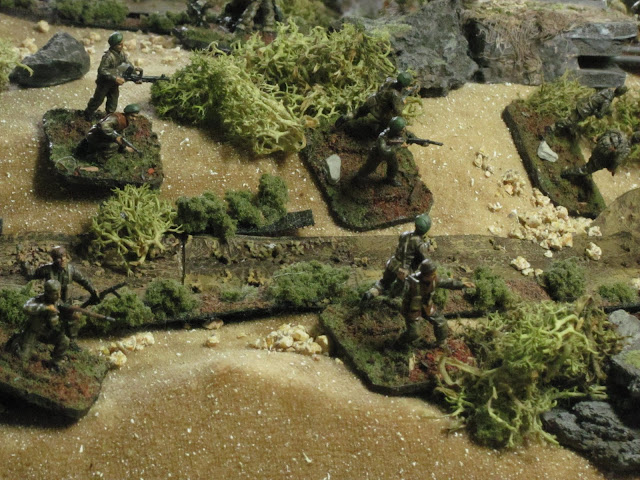 The only units that began the battle released and able to operate freely were two platoons of British commandos, one SBS and the other LRDG, which began along the road running east of Mt. Meraviglia's summit. 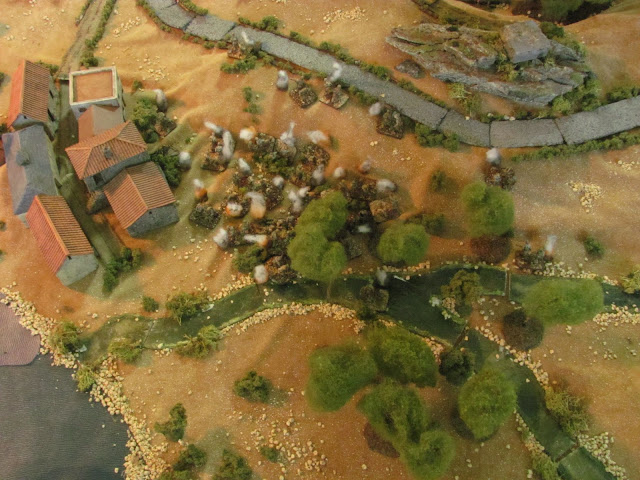 The Germans chose a drop zone just south of Constantino. The drop was remarkably tight and casualties not too severe – about two sections for each of the three companies. Sorting themselves out 1 Kp. immediately pushed to secure the undefended Raahi Ridge coastal battery (top right) while 2 and 3 Kps. moved south towards Germano Hill (beyond Constatino to the left). 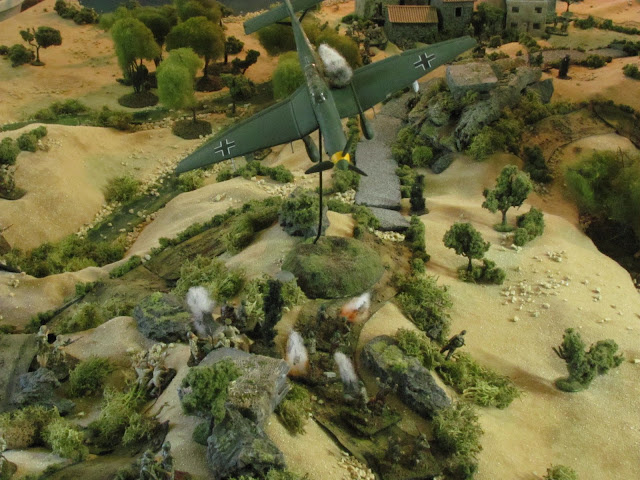 The two commando units, eagerly pushing down the road to beat the Germans to the Raahi Ridge objective are caught in the open by a Stuka and strafed. The attack had the effect of driving the commandos off the road into steep rocky terrain and slowing their advance to the battery. The Luftwaffe was very active throughout the battle. 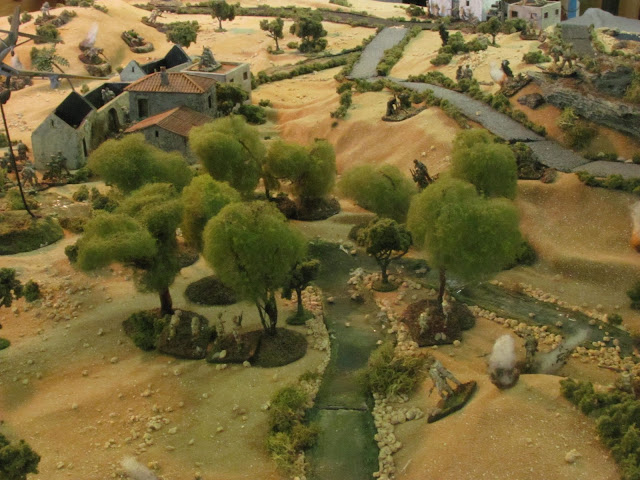 B Company comes down from the mountain

Remarkably the British commander was able to release D and A Companies on the second turn and B Company on the third (a 1 or 2 in 10 chance). A and D are confined to their deployment areas but B can move freely and quickly advances towards the woods below and west of Raahi Ridge to ouftlank the German 1 Kp. already on the objective. 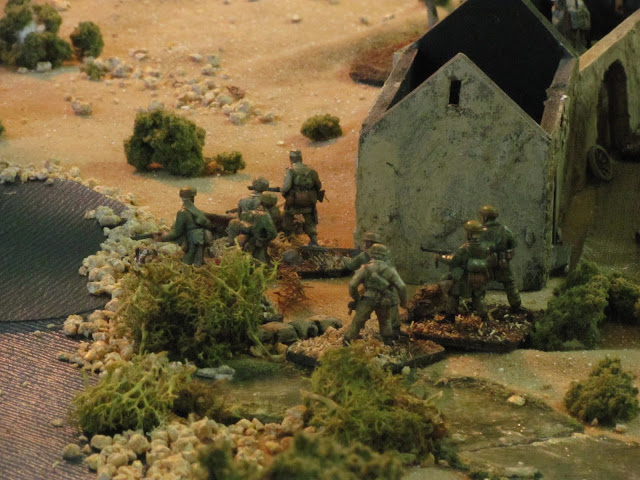 The German 2 and 3 Kps. quickly move through the undefended village of Constantino, setting up their fire base in the houses as other units move around the flank in prepation for the assault on the Germano Hill defences. 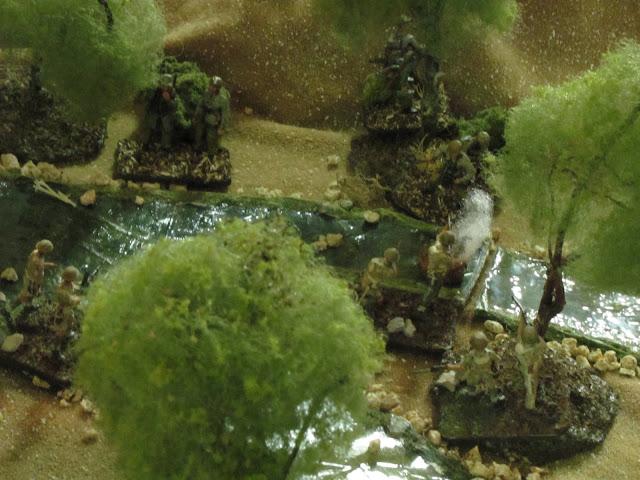 B Company attacks through woods

B Company quickly presses home its attack through the woods below Raahi Ridge, driving out the German paras by attacking across the stream and into their flank. 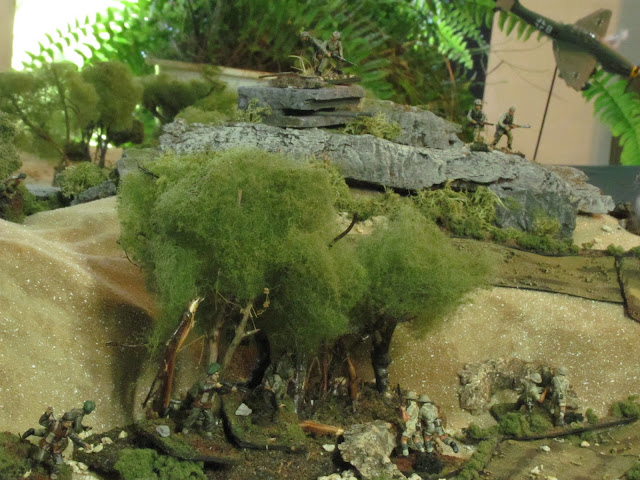 Commandos move into the woods on east side of Raahi Ridge

On the other side of the ridge the commandos enter into the woods below the battery, but not without casualties as they cross the open ground and take enfilading fire from the Fallschirmjaeger now well emplaced on Raahi Ridge. A Company welcomes their arrival but explains apologetically that they have standing orders and cannot help in the assault, as much as they would like to. But they will see what they can do in keeping the Germans' heads down with supporting fire. 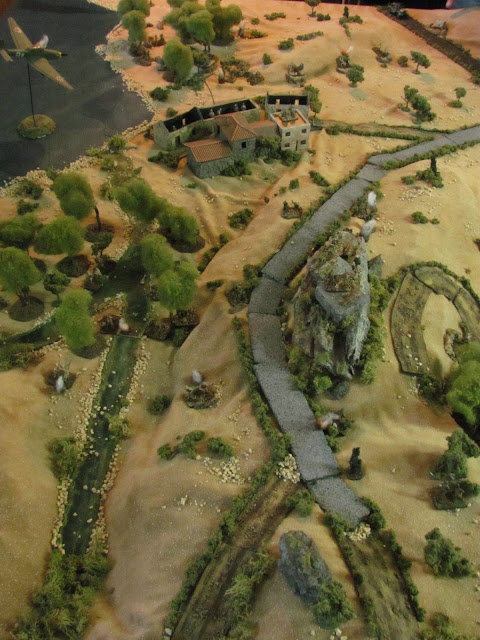 At the top of the picture can be seen 2 and 3 Kps. pressing home the attack on Germano Hill and the nearby woods. After taking some intial casualties they quickly clear out the British positions and seize this objective.
In the middle is Raahi ridge with its coastal battery. The Germans are in firm possesion of this but are taking a beating in the woods as B Company (left) attacks from the flank.
Off picture to the bottom are the HQ units, mortars, carrier platoon and FOO on Mt. Meraviglia, all still confused as to what is exactly happening and unable to enter the fray. Both the brigade and battalion commander are present in this group, which may explain the lack of coherent leadership. 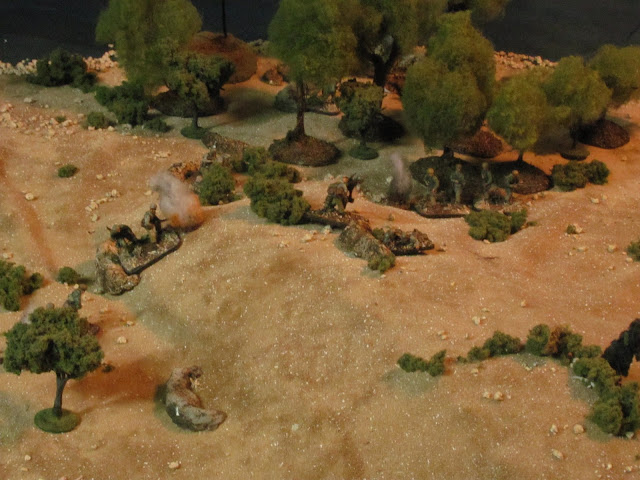 The last defenders on Germano Hill are wiped out and as a couple of sections clear out the remainder of the British in the forest the rest of 2 and 3 Kps. move to support embattled 1 Kp. on Raahi Ridge. 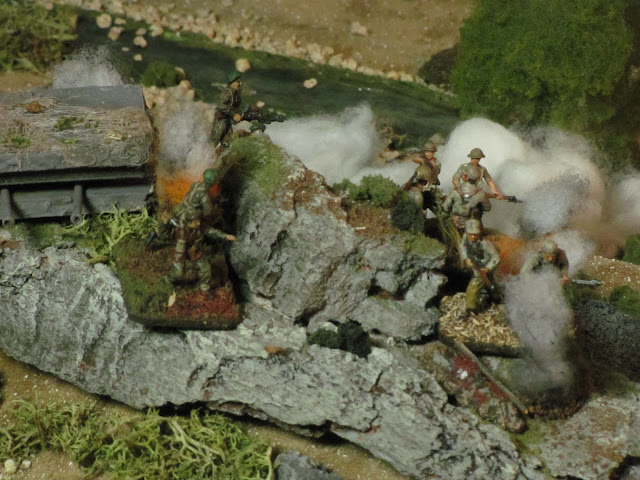 Under attack both from C Company to the west and the Commandos to the east, the remnanats of 1 Kp. are slowly pushed back off the ridge in bitter hand to hand fighting. 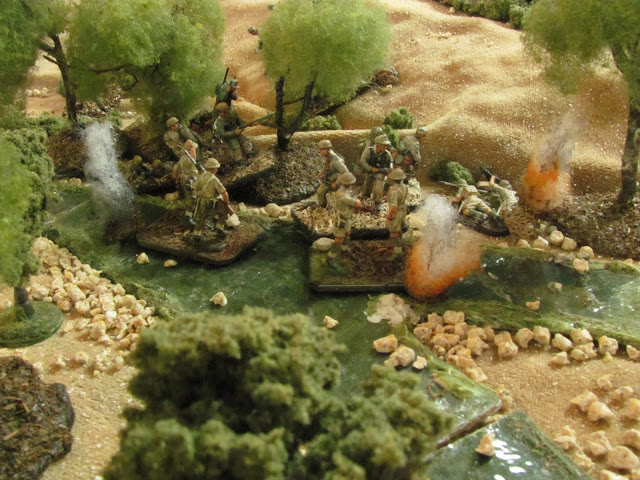 However, just as 1 Kp. was breaking and fleeing from Raahi Ridge, the German 2 and 3 Kps. fight their way into the woods from the north, cutting off the rest of C Company from joining the Commandos above and quickly wiping out the remainder of the company. 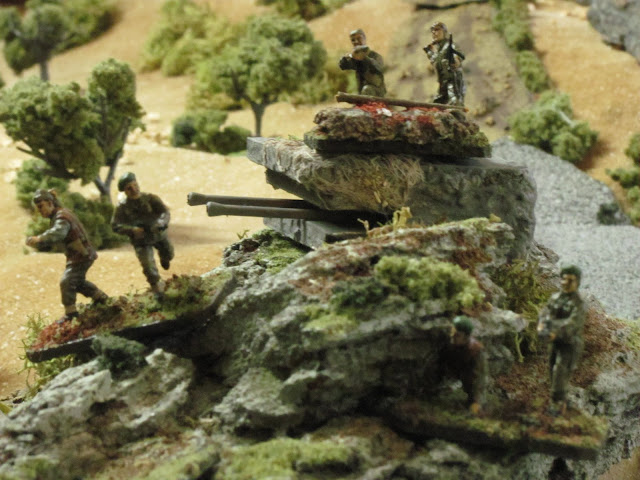 Commandos dig in on objective

With the enemy evicted the Commandos, reduced to platoon strength, dig in on the objective in anticipation of the next German attack. 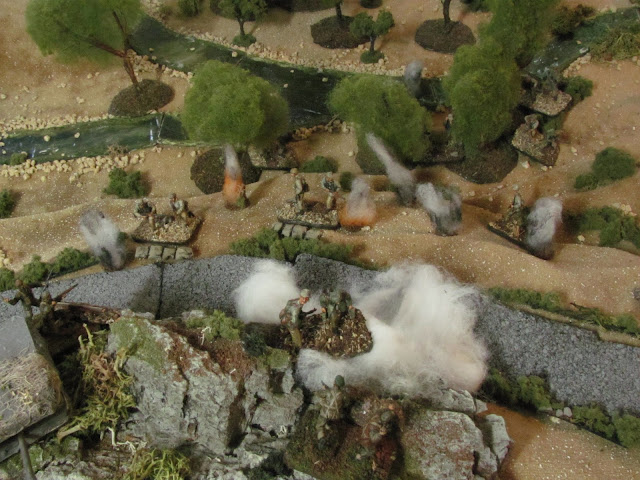 Germans stonked as they try to retake the ridge

Just as the German Fallschirmjaeger emerge from the woods under cover of smoke to attack the Commando positions, the British brass on the hill finally wake up, shake the ground hogs out of their mortar tubes and make contact with the 25 pdr. battery. A devestating barrage catches the Germans in the open and thins out their numbers, but some units still manage to make it up the hill and seize a toe hold in the rocky area at the summit of the ridge. 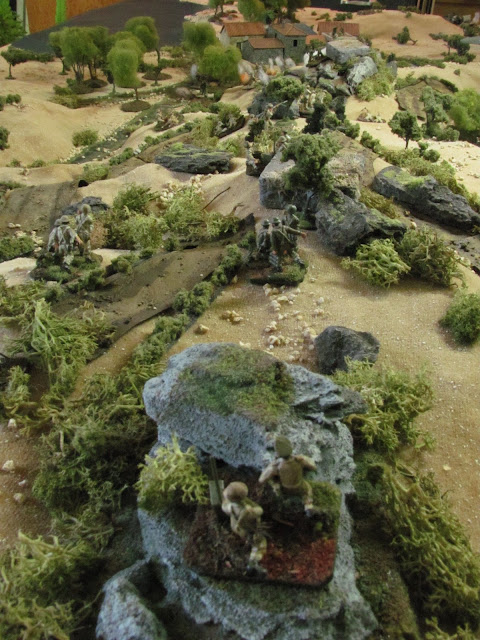 Taking advantage of their excellent observation position on the top of the mountain the British 3” mortars and FOO lay down a wall of fire on the attacking Germans. 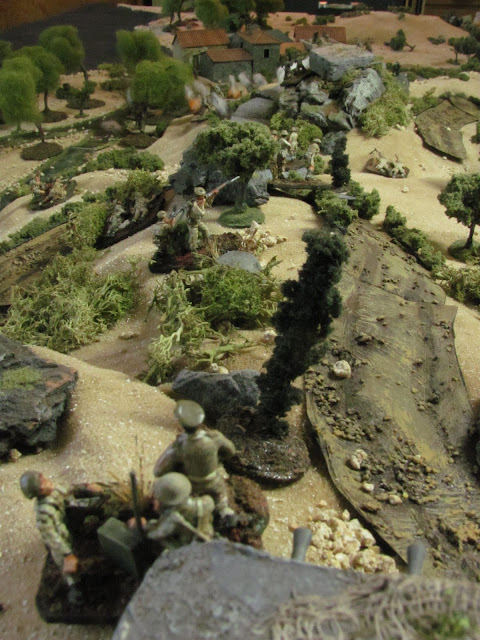 As the battalion commander looks on the carrier platoon, now also released, quickly moves down the mountain to suppport the embattled Commando platoon, reduced to two sections and slugging it out on Raahi Ridge. 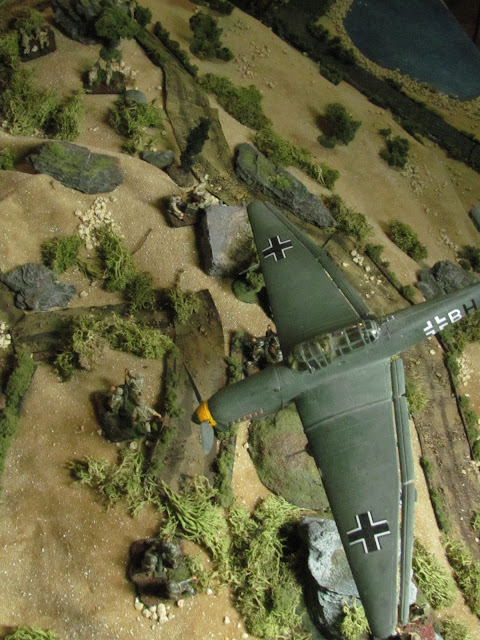 With the mortars in action the Stukas now have a new target and dive bomb their positions. 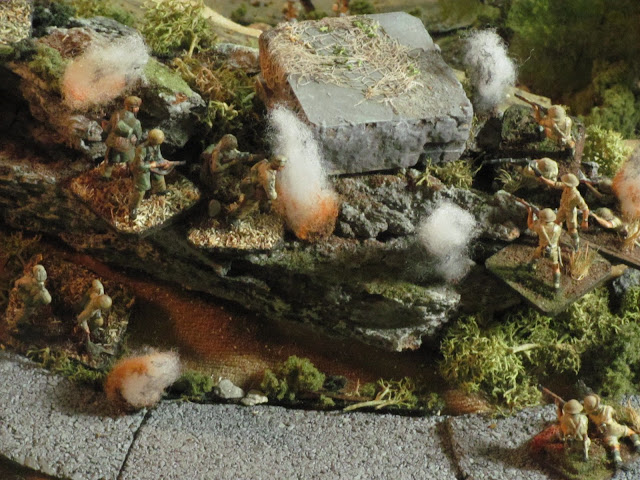 Battle at close quarters
The fight for the battery devolves into a blood bath. The Commandos defend badly and the Germans drive them off, getting a significant foothold on the ridge before the carrier troops arrive, leaving the British hanging on at one end and the Germans the other. A seesaw battle breaks out with both sides pummelling each other with mortar and artillery stonks in a nasty game of King of the Hill, with even the British battalion commander thrown into the action. 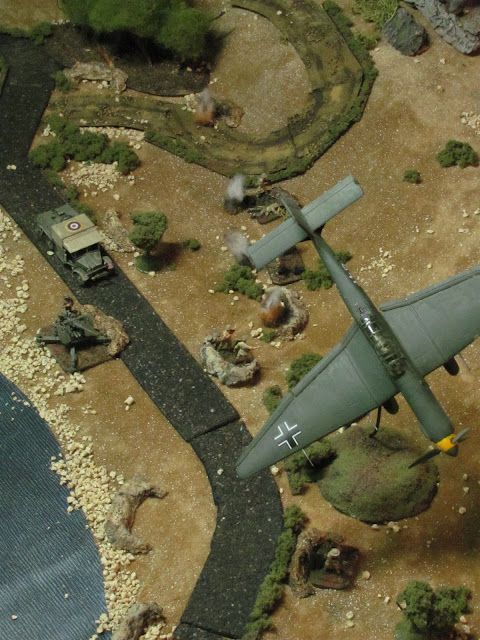 Throughout the battle Stuka attacks continue but with little result outside of a nuisance factor. The British AA does a stellar job of diminishing the Stukas' effectiveness, other than on this occasion where the Stuka brasses up A Company at the foot of Raahi Ridge in a strafing run, knocking out two sections of infantry in the process. Throughout the battle A Company has had to sit on its hands and watch the battle raging just to the west of them, but their “prepared defence” orders keep them from exiting their deployment zone. 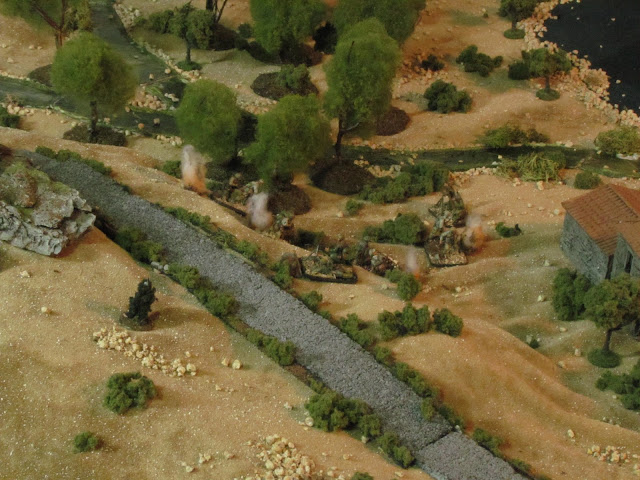 The strongest German company, 3 Kp., breaks and runs and never comes back, leaving about two platoons (the remnants of the other two companies) of Germans to slug it out with the British carrier platoon. 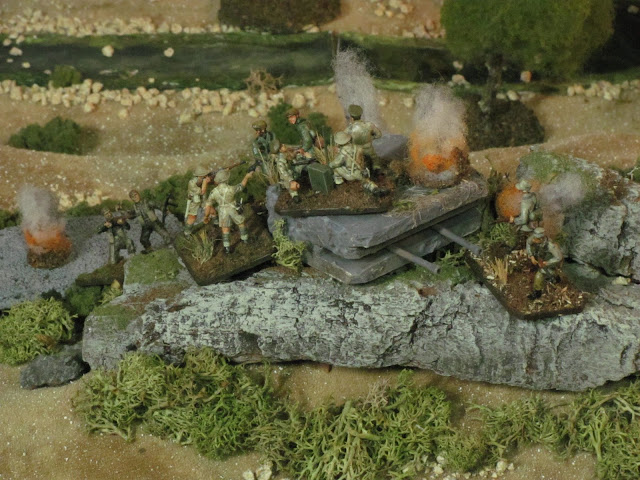 Final attempt by British to retake the objective

By the gritty end only two stands from either side are left on the ridge. It all came down to a close assault by the British (including the last Commando, now returned after running away - er - strategic withdrawal) to drive off the Germans, but the German defenders win the close assault. At the end three stands were left around the bunker, two Germans and the British carrier commander, but with none in possession of the objective. 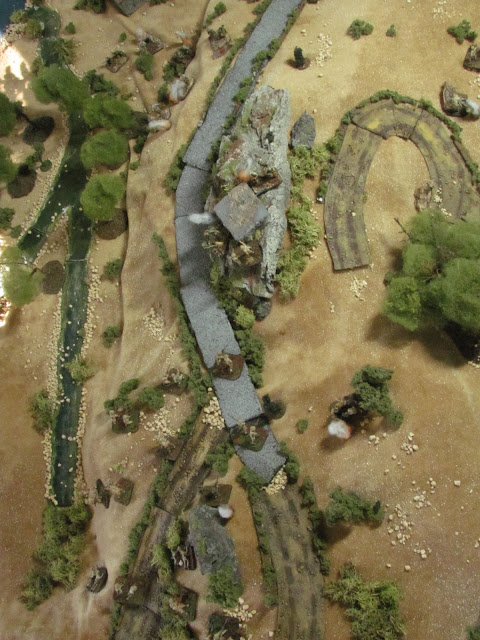 Battle over - or just begun?

The battle ended with the Germans holding one objective with a second in dispute. This was close to the historical outcome with Germano Hill and Raahi Ridge falling to the Germans after bitter fighting. Although the final chapter won't be written until the second scenario is played, at the moment the Germans hold the advantage in victory conditions. Ironically a reinforcing company committed to this scenario (the British commander had to decide what reserves would be allocated to either scenario) finally was released and entered the south end of the battlefield with two turns to go. Racing down the mountain road, lead elements of this company were within a move of reaching the battery objective, but the game came to its conclusion before they coud get there! C'est la guerre.