We playtested my new scenario, "Galatas Counterattack" last week. It was played on a 4.5' X 4.5' table using 20mm figures and the Battlefront WWII rules system. It is the second Crete scenario I have written, the first being the fight for Maleme Airfield. This time the Kiwis get to punch back.


On May 20, 1941 the Germans launched Operation Mercury, the airborne invasion of Crete. Over the following four days they secured the Maleme airfield and steadily pushed the defending forces back as they gained a grip on the island.
Crack German paratroops and mountain infantry, pushing strongly along the Galatas Line, finally forced the New Zealand Composite Battalion (an ad hoc battalion formed from anti tank gunners, engineers and support troops) and 18 Battalion from their positions around the village of Galatas, seizing it shortly before dusk on the 25th and thus threatening the entire Galatas line.
The New Zealand commander hastily threw together a counterattack to restabilise the Galatas line, employing Vickers VIB of the 3rd Hussars and recently arrived companies of the 23rd Battalion. As the tanks moved up the road towards the village, C and D companies of the 23rd Battalion, with fixed bayonets, fell in along both sides of the road.
Joined by elements of the recently ousted 18th Battalion intent on revenge, the 20th and other units, the New Zealanders swept forward in what has been called “one of the greatest bayonet charges of the Second World War”.

The challenge in designing this scenario was to create an atmosphere that reflected the German surprise and confusion in responding to the unexpected NZ counterattack. To achieve this, the defenders are given a a "disorder" rating for the first couple of turns, severely handicapping their ability to respond and giving the opportunity for the Kiwis to push home the attack. 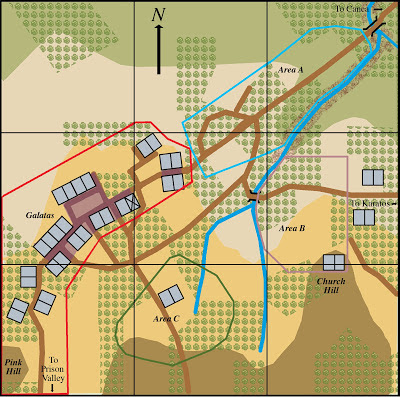 The German player defended with his three company-sized maneuver elements in and around Galatas (red line), placing elements of the 1st Battalion, 100 Mountain Regiment to the northeast, the 2nd Battalion troops covering the center and the elements of Ramcke group (fallschirmjaeger) to the southwest, leaving the southern most BUS's (built up sectors) undefended.
The New Zealand commander attacked two up, with C and D Companies straddling the road and advancing with the light tanks of the 3rd Hussars (Area A) while the ad hoc group lead by Lieut. Col. Gray moved to out flank the defenders to the south (Area B). 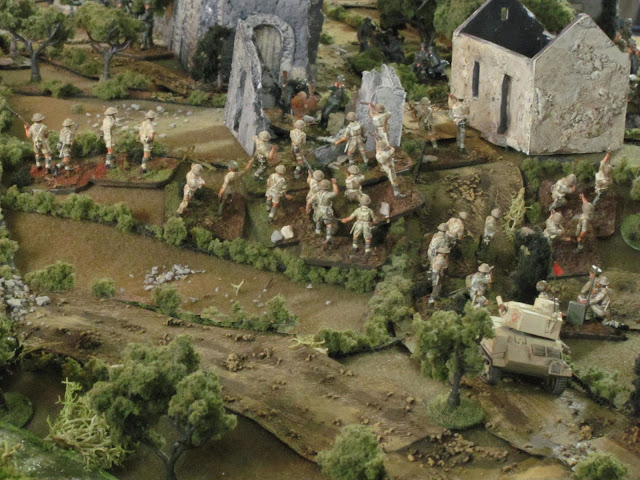 
Elements of 18th Battalion, recently ousted from the village along with soldiers from the 20th and Composite Battalions rally under Liet. Col. Gray and join in the attack. 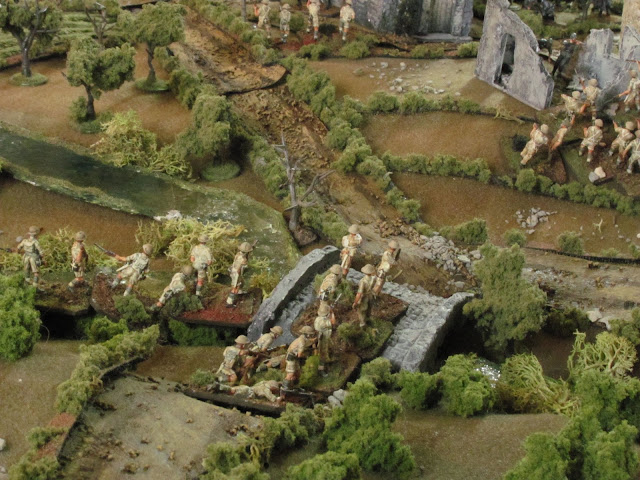 3. C Co. storms the church
While the outlying buildings are being cleared, a platoon of C Company, lead by Capt. Harvey push on into the town and storm the Galatas church at bayonet point. 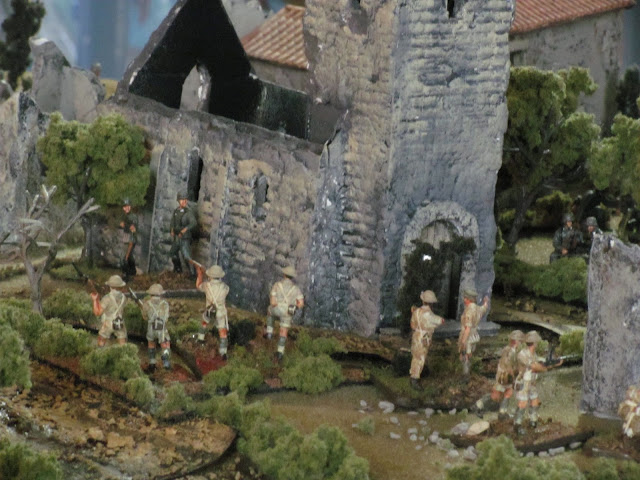 4. Mountain Troops flee Galatas
Rattled by the sound of machinegun fire, clank of tank tracks and fierce cries from the charging Kiwis most of the Mountain Regiment's 2nd Battalion troops break and flee the village towards their own lines. 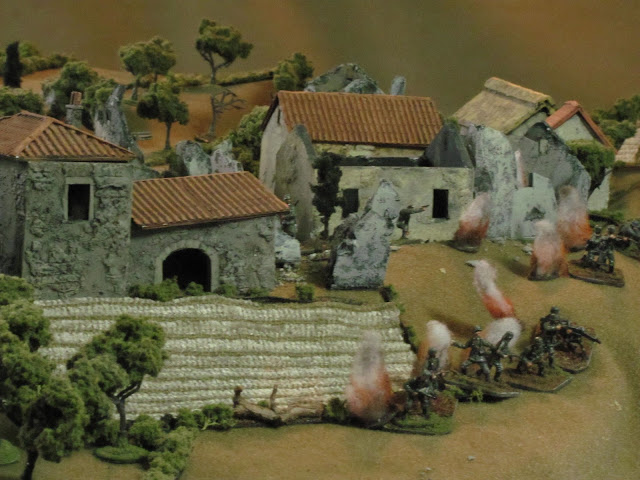 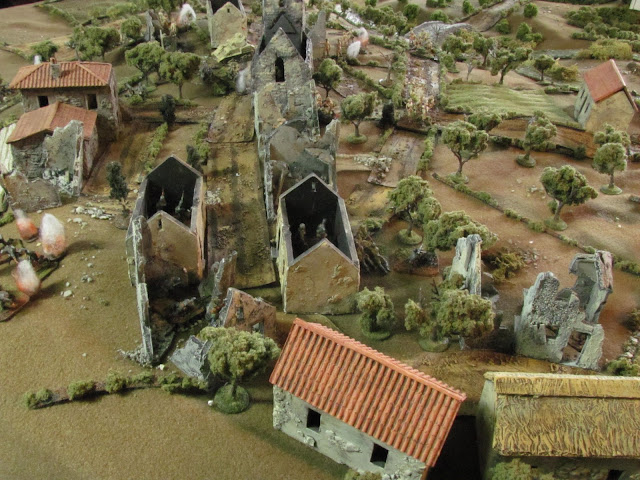 6. Trouble in the orchard


In the orchard bordering the church yard the New Zealanders run into the first signs of a hardening resistance. As the Vickers advances in support a platoon of Germans backed up by a 50 mm mortar fend off the first attempt to drive them out at bayonet point. 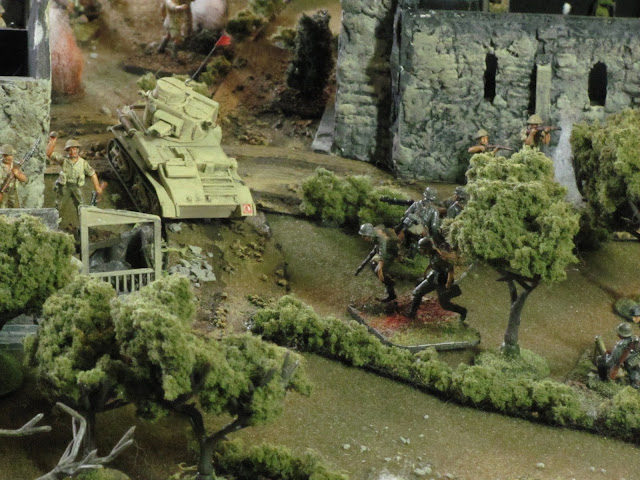 7. Ad hoc company advances on left flank
With elements of D Company retreating from the fight while others clear the church, the troops under Lieut. Col. Gray cautiously advance up the road east of Galatas. 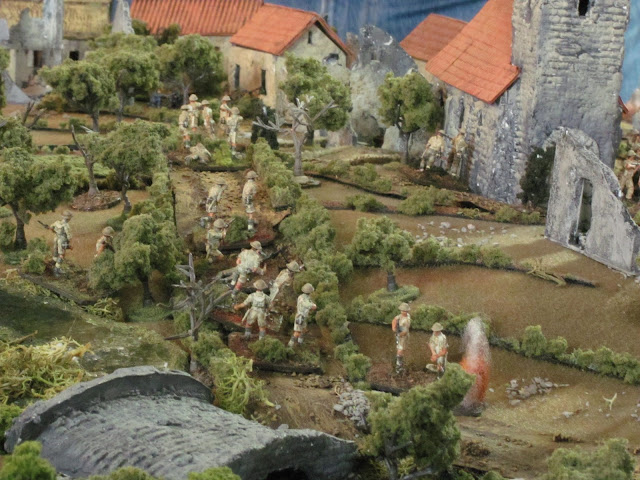 
Over half the 2nd Battalion company flee Galatas, never to return, before their commander manages to stem the tide at pistol point and get them back into the fray. 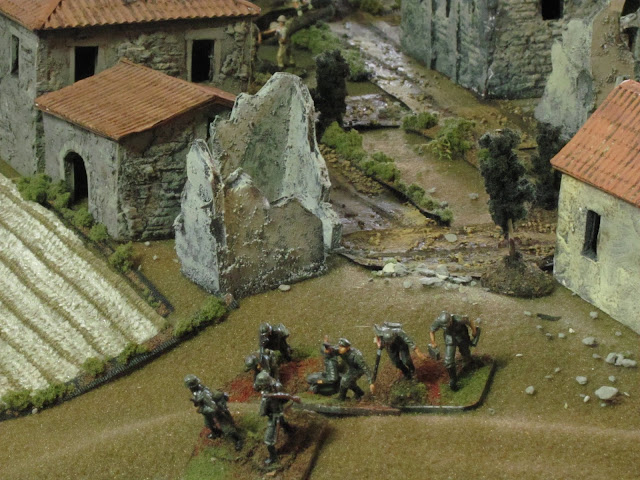 9. … and reoccupy Galatas
The rallied Germans reoccupy buildings on the west side of Galatas just as troops from D Company enter the same street of houses from the north. 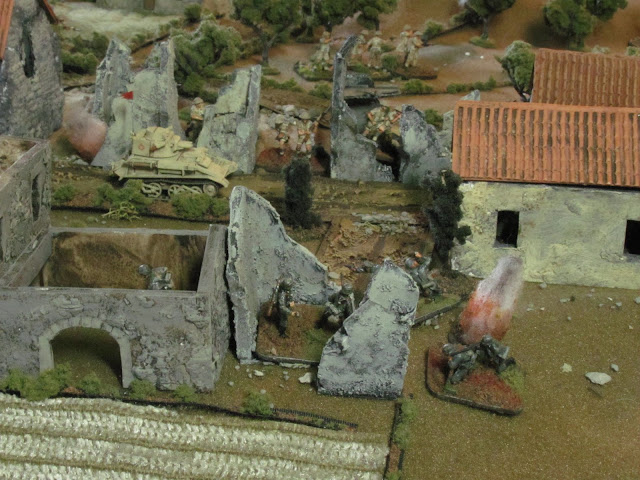 10. Overview
With all of the 1st Battalion elements swept out of Galatas, the New Zealanders press home their attack. D Co., after clearing the orchards to the west of the village battles it out with the 2nd Battalion troops that have rallied and reoccupied the west side of the village. Meanwhile C Co. has come up hard against the veteran German Fallschirmjaeger holed up in the south end of the village and bring forward the light tank to help winkle them out.
Lieut. Col. Gray's command continues to move around the east flank, the first units entering the outlying houses to the south of Galatas largely undetected by taking a wide sweep through the orchards, taking sporadic fire from the German paras on that side of town.
The New Zealand commander, sensing the imminent collapse of the German defences, holds off ordering in his reserves, leaving the 2nd Vickers tank platoon on the outskirts of Karatos and the 20th Battalion's D Company in their positions dug in around the creek east of the village. 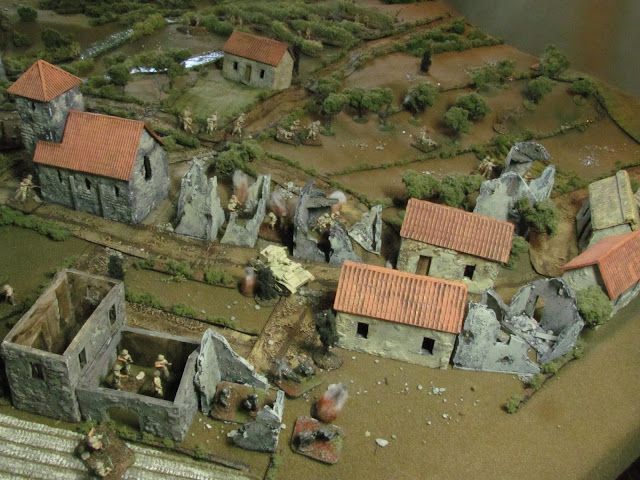 11. Just when you thought it was over …
The German commander, realizing that he is about to be out flanked by enemy troops moving around to his rear, decides to take the initiative and launches a hasty counterattack on D Co. rather than wait to fight it out on two fronts.
This is easily driven off with German casualties, but the attack seems to be enough to cause loss of nerve on the part of C Company who become disordered on their next morale check. The Vickers is disordered as well by small arms fire, and the Germans take this opportunity to launch a second counterattack, swarming out from the cover of the buildings, driving off the tank in close assault and clearing the entire area of Galatas of enemy troops! 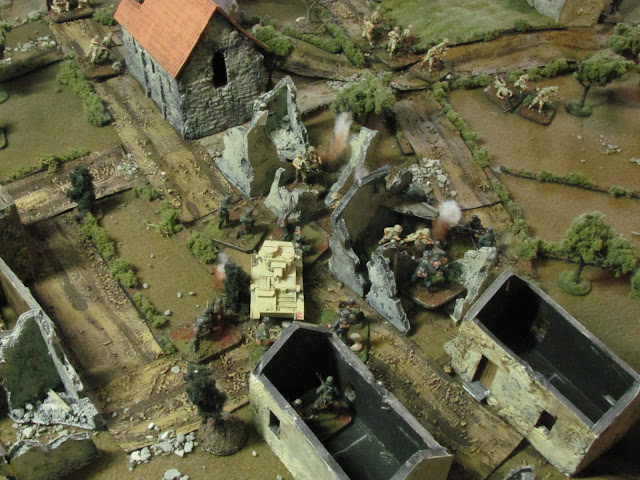 
On the German right flank Lieut. Col. Gray's ad hoc company break off their flanking maneuver and charge in an attempt to recapture lost ground. But the enemy holds fast, repelling a simultaneous attack from D Co. on the left and inflicting serious casualties. 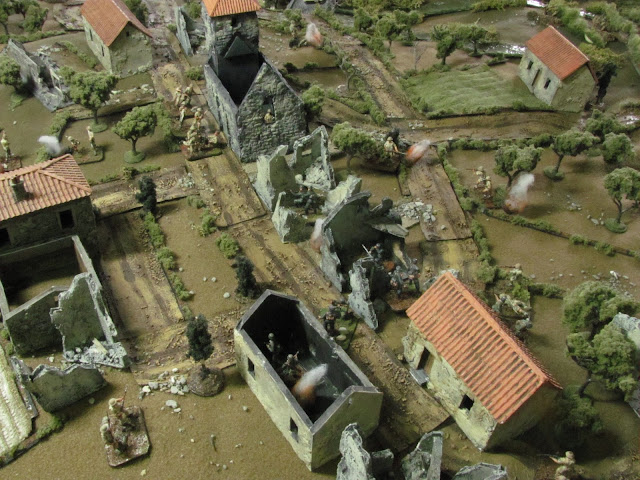 13. D Co. section advances on west side of Galatas 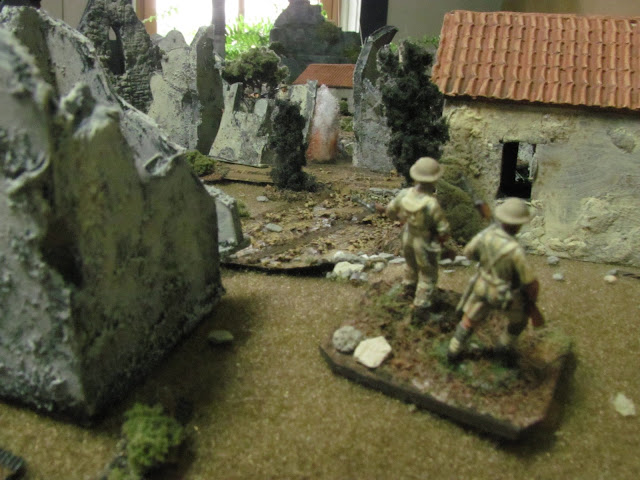 14. Stragglers advance
As the New Zealand attack falters Maj. Thomason, the 23rd Battalion's commander, rallies stragglers and brings them forward through the cleared part of the village. 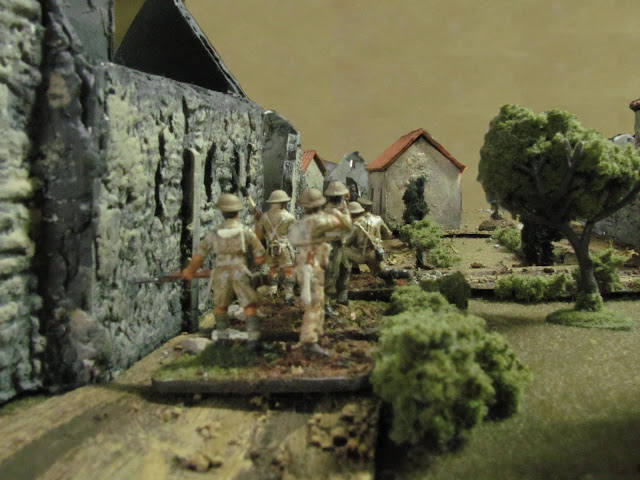 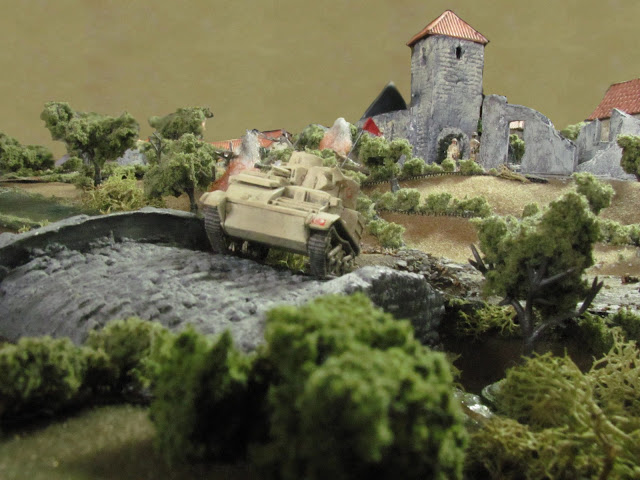 16. Ad hoc co. east of Galatas
Their counterattack driven off at great cost, the remnants of the ad hoc company take cover in the orchards east of the village. 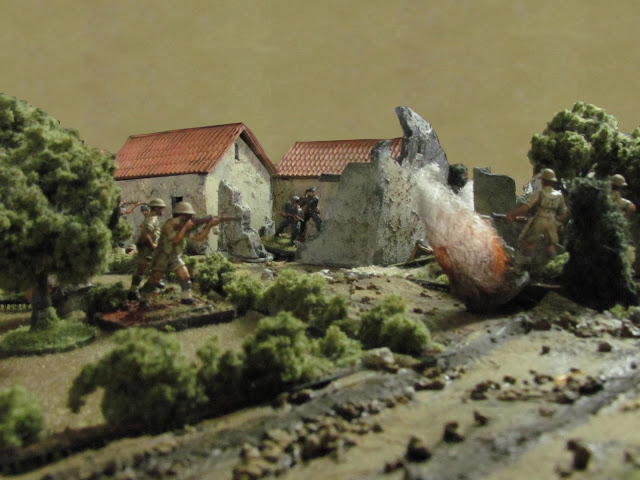 17. Clearing the orchard
With the enemy on the ropes, Fallschirmjaeger exit the cover of the Galatas buildings to clear the New Zealanders out of the olive orchards to the east of the town. 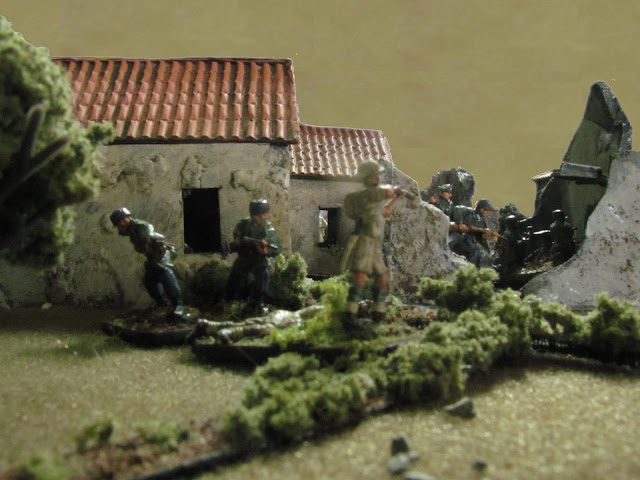 18. And again, just when you thought it was over …
On the final turn, the New Zealand troops fail to rally and simply hold position, with the sole exception of a section from C Company, which charges in and once more clears out the Germans who had just retaken the western most houses in Galatas. As the German defenders then prepare to oust the last two undisordered enemy units from Galatas and incredibly snatch a major victory from the jaws of defeat, a bad morale roll sends the mountain troops packing and the paratroops hunkering down disordered. With two Kiwi stands still in good order in the village and all of the German stands disordered, the New Zealanders score a major victory and Galatas is theirs. The historical result, albeit achieved in a rather unorthodox manner.

Post Mortem
There was little more either side could have done. The fight was a pretty straight forward slugging match and good and bad luck abounded on either side. The night rules, causing all units to behave unpredictably, coupled by the initial disorder imposed upon the German defenders meant that it was a game full of high tension and surprising turn arounds. Thinking the fight was his up until almost the very end, the NZ commander didn't commit his reserves (the reserves being a non-historic scenario balancing option - those units were present but were never ear-marked to be called upon in this battle). But if he had he would have foregone the opportunity for a major victory, having to settle for partial at best. The result proved him right.