"The Neck of the Swan" The Battle for Wetteren Bridge

We played R. Mark Davies excellent scenario "The Neck of the Swan" The Battle for Wetteren Bridge last weekend. It was played on a 6' X 4' table (you can see how the table was put together in the post below) using 20mm figures and the Battlefront WWII rules system.

The fight takes place on September 6, 1944, and is an odd little spat in that it places a field squadron of engineers in the unusual position of having to act like combat troops. In the highly fluid situation created as the Germans retreated and the Allied pursued them through France and Belgium, the bridge at Wetteren was threatened by counterattack and the engineers were the only available troops to defend it. Other Allied troops and armour had already crossed the bridge and were now ranging ahead on the north side so it was imperative that the bridge be held.

The attacking units were from the 70. Infanterie-Division (Weissbroft), soldiers that had been placed in a common unit because of their collective stomach disorders. On both sides the units were tagged as  'trained" for this scenario.

I chose to bolster the German side by an additional weak company as it seemed that the objective would have been difficult to take with the suggested orbats. The designer of the scenario suggested this as one of several approaches to modifying the scenario for game balance.

Spoiler alert: If you plan to play this scenario you might not want to read the AAR as their are things that only the umpire should know. 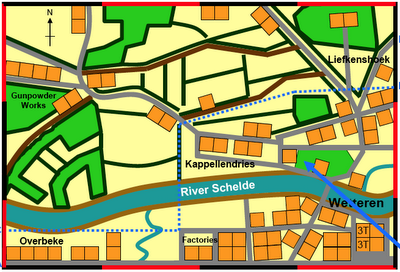 The British player chooses to defend with No. 2 Troop in Kappellendries, No. 3 Troop in the built up area north of the bridge (which I 'm calling Liefkenshoek) as well as the small woods just north of  the village, and No. 1 Troop with the attached 17 pdr. on the south bank, clustered around the bridge in Wetteren. His recce vehicles (historically Humber LRC Mk. II's but substituted with Bren-mounted Universal Carriers in this scenario) are all re-assigned to bolster No. 3 Troop.

1. The Battlefield
All the fighting took place on the north side of the bridge. Liefkenshoek is in the foreground, Wetteren Bridge just to the left and Kappellendries in the middle distance. The countryside is flat and criss-crossed with hedgerows and woods, making for close terrain. 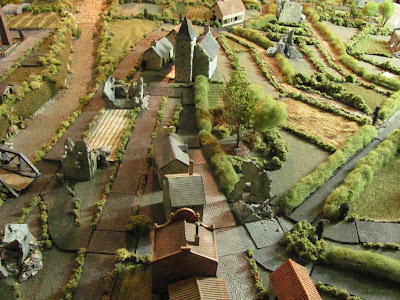 2. The Objective
Wetteren Bridge, crossing the Schelde is both sides' objective. The Royal Engineers of 4 Field Squadron 7th Armoured Division are to hold it, the Germans of Grenadier Regiment 1020 must try to blow it. The British forces are bolstered by an attached 17 pdr. with the hope of reinforcements arriving in the form of a squadron of Cromwells and a company of infantry.
The Germans have the only indirect fire support available, a mortar platoon. They are also supported by a PaK 40 anti-tank gun and an attached platoon of pioneers present to blow the bridge.
The River Schelde is impassable with steep banks and a low embankment at the top. 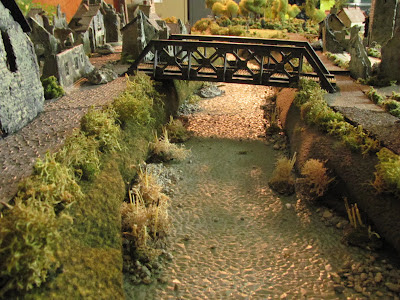 3. The German Advance
The Germans move from their starting positions, swiftly advancing their mortar platoon just north of the river to where they will have a clear view through to the bridge. 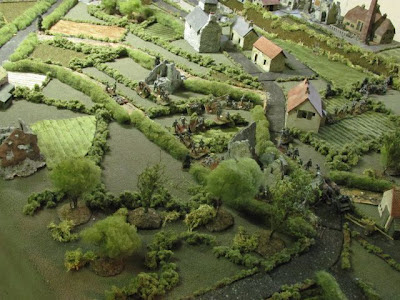 4. First Contact
As 1 and 2 Kps. converge on Kappellendries from two different directions an advance squad draws fire from the outlying houses. 3 Kp. (in the foreground) move to the left flank. 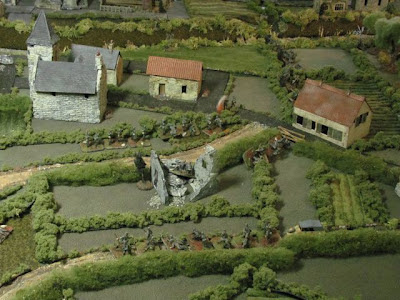 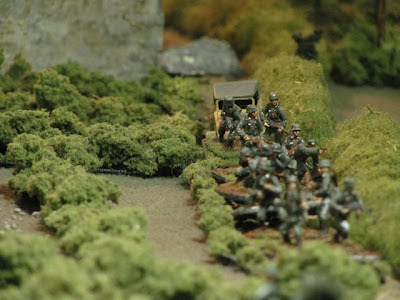 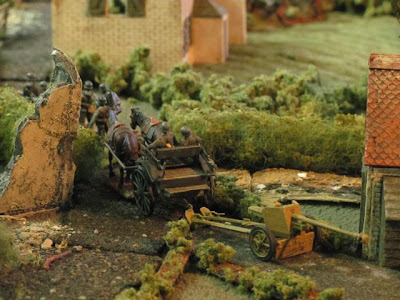 7. Clearing Kappellendries
A fierce firefight  breaks out as the Germans discover that Kappellendries is solidly defended. Suppressing fire is laid down as a Panzershrek squad attempts to close in on a British halftrack. 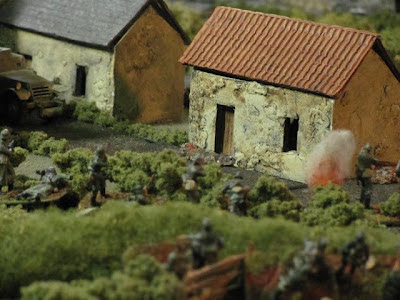 8. 17 pdr. opens up
The British 17 pdr., emplaced in Wetteren proper opens up long range on the advancing German infantry. 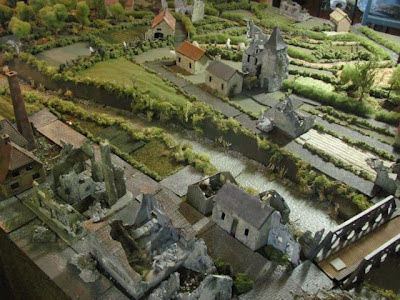 9. 3 Kp. approaches Liefkenshoek
3 Kp.makes the paved road undetected and moves in column towards Liefkenshoek from the north. 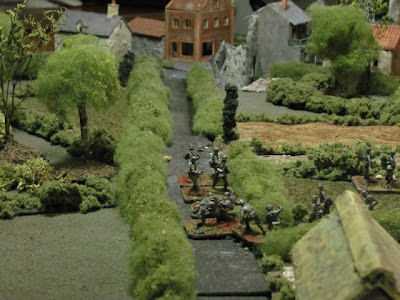 10. Overview
On the left 3 Kp. can be seen making their way towards Liefenshoek, while 1 and 2 Kps. work to clear Kappellendries. 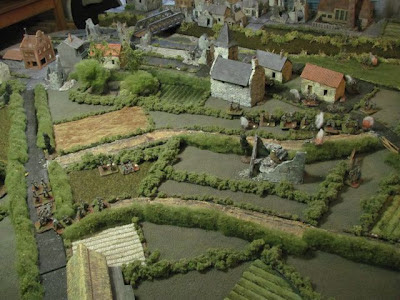 11. Taking heavy fire from Kappellendries
The defending engineers prove tough to dislodge but the Germans slowly push their way in to the village, forcing the British to fall back to Liefkenshoeck. 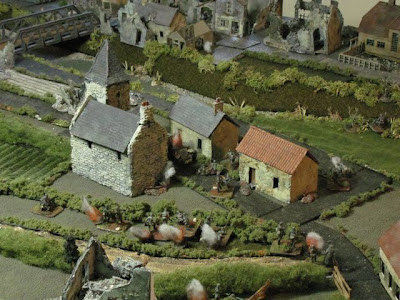 12. Engineer's recce attempts overrun
Spotting the Germans advancing towards the north of Liefenshoek, a Bren carrier attempts an overrun but is stopped short by a panzerfaust. This starts a cat and mouse game between the two, but has the effect of moving the rest of 3 Kp. off the road and into the adjoining field. (We hide panzerfausts etc. until they actually fire, making it more difficult to judge whether they are safe to approach or not.) 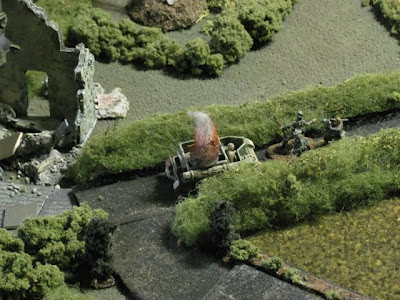 13.  3 Kp. comes under fire
With much of Kappellendries secured the Germans start to infiltrate along the north side of the village. Caught in the open 3 Kp. and elements of 2 Kp. take heavy fire from the woods directly north of Liefkenshoek,  and 3 Kp., already not at full strength, rapidly exceeds 50% casualties. 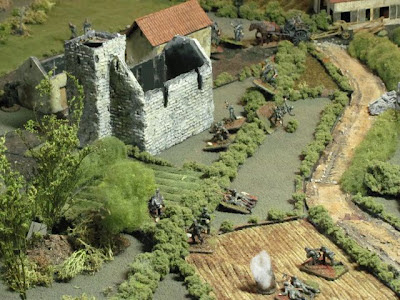 14. PaK 40 moves into Kappellendries
Kappellendries is finally cleared and the Germans move their anti-tank gun up to the edge of the village. From here it is able to sight down to the bridge as well as cover the entrances to Liefkenshoek. 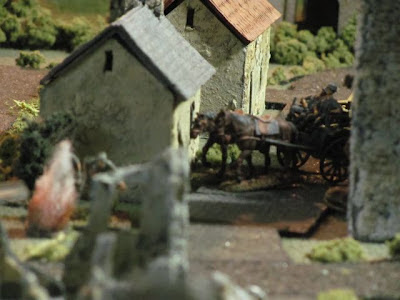 15. British armour pulls back
With the PaK 40 emplacing, the British carriers and halftracks, up to now providing solid fire support to the defending infantry, are forced to pull back out of sight of the guns. This allows the Germans to begin to form up for the final push into Liefekenshoek and towards the bridge. 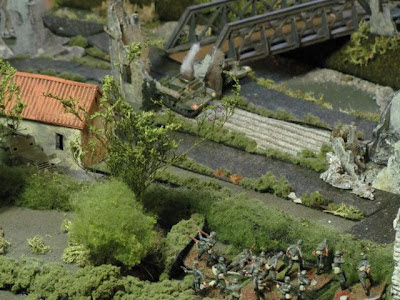 16. Recce knocked out
Meanwhile, on the left flank the Germans enfilade and knock out the blocking recce vehicle in close combat and begin to infiltrate into Liefkenshoek from the north. They are temporarily driven out again through fierce counterattack as casualties on both sides mount. 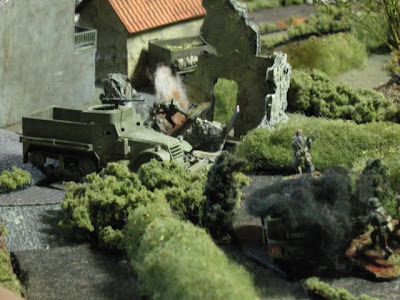 17. Attack closes in on Wetteren Bridge
The German mortars lay down a smoke screen along the south side of the river, hoping to cut off enfilade fire as they move towards the bridge. A Troop's halftrack takes advantage of the smoke to dash across the bridge to bolster the north side defence with its 50 cal. 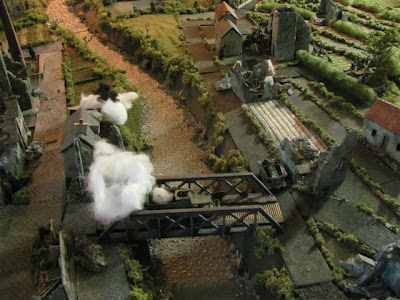 18. No. 1 Troop moves to reinforce north bank
Other elements of No. 1 Troop also sprint across the bridge to harden the dwindling north shore defence. Hard on their tail comes a mysterious Dingo which has arrived on the scene from Overbeke. It is the vehicle of the Divisional Commander Royal Engineers, Lieut. Col. AD Hunter, who is making inquiries as to the location of 4 Field Squadron's commander, Major Fitzgerald. 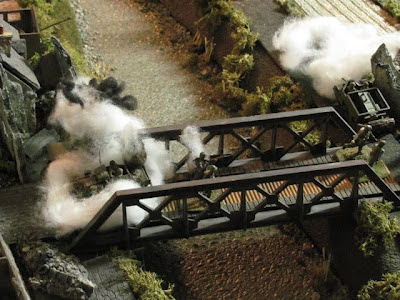 19. Liefkenshoek begins to fall
As No. 1 Troop units take up positions along the river bank, No. 3 Troop battles it out in Liefkenshoek. The Germans clear the woods, brewing up two of the halftracks in close combat. Commander Fitzgerald's HQ (tile-roofed house), well-advanced, comes under attack. 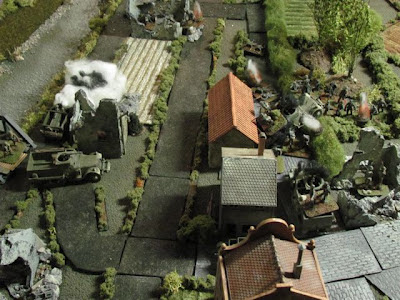 20. Major Fitzgerald falls back towards bridge
Squadron HQ survives the attack but is driven back into a building adjacent to the bridge. 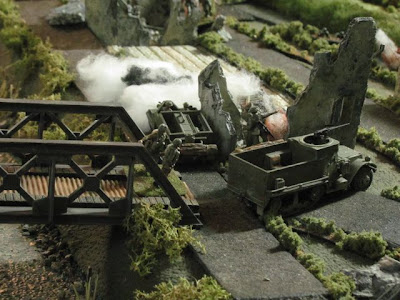 21. No. 3 Troop bugs out
With the Germans all around No. 3 Troop breaks and abandons Liefkenshoek, running for the safety of the south bank. 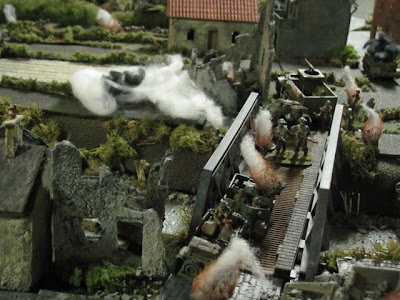 22. Lieut. Col. A.D. Hunter gains an appreciation of the situation
Hunter arrives at Fitzgerald's newly relocated to find No. 3 Troop streaming by in full retreat and Fitzgerald's HQ occupied by the enemy. A substantial mortar stonk convinces him that it is time to bug out as well. 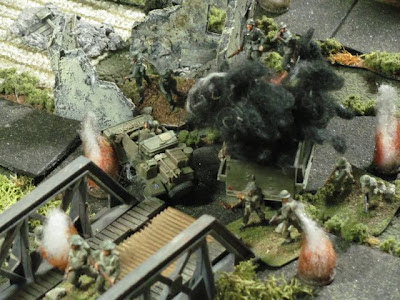 23. 1 Kp. in full retreat
Casualties are causing command and control on both sides to break down. Just as the British defence on the north side of the river collapses, 1 Kp. breaks off the attack and flees, snatching defeat from the jaws of victory - or something like that. 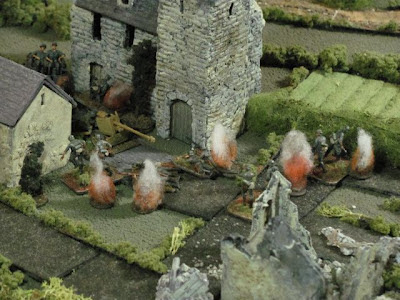 24. Slim foothold
A second deadly mortar attack on the bridge thins the British ranks further. 2 Kp., backed up by the German pioneers, pick up the attack and knock out the British from the remaining riverside building, leaving only two defending stands on the north bank. 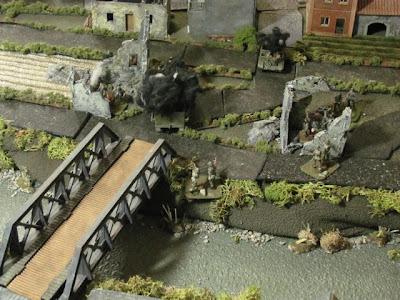 25. Last attempt to get help
With a skirmish line of German infantry thrown up along the river bank, the pioneers move into position to begin wiring the bridge for demolition. In a final attempt to break through and seek out reinforcements Hunter guns his Dingo across the bridge … 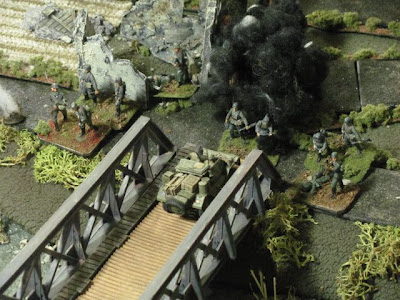 26. End game
But is knocked out by a German Panzershrek. A second Quixotic attempt by No. 3 Troop's recce is stopped by German AT fire, while the screening German infantry keep the enemy's heads down, allowing their pioneers to do their work. The bridge is successfully wired for demolition on the very first attempt. 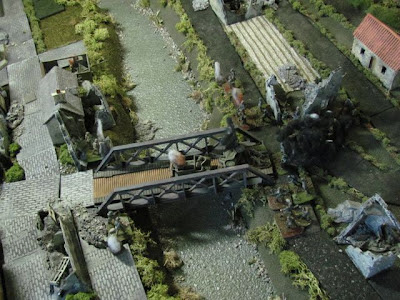 27. Thar she blows!
The charges are detonated and the Wetteren Bridge goes into the Schelde, taking Hunter's Dingo and the recce carrier with it. Mission accomplished, one for the bad guys. 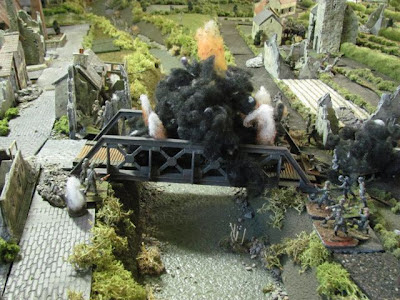