Tackling the Napoleonic Spanish Army in miniature is always a bit of a trip down the rabbit hole, but the overwhelming variety and craziness of it all makes the trip that much more rewarding.
Having painted up quite a few bog standard line regiments in white, a couple of regiments of light infantry in blue, a smattering of foreign regiments and quite a few representing the militia raised in 1808 and later, I wanted to add to this some provincial militia. The provincial militia can really be divided between those raised before 1808 and those raised under the Junta in 1808 and afterwards in response to the French invasion. According to Oman and other sources, those pre-1808 militia were, in terms of training, equipment etc. not that different from the line regiments.
These are the troops I'm thinking this batch of militia could reresent, in the ubiquitous brown coat (which was prevalent in militia and line alike as the war wore on and supplies became difficult to obtain), even though their original unifrom would have been white with red facings, the same as almost all of the pre-June 1808 provincial militia regiments and many of the line regiments, and as shown in the image of the standard bearer below. 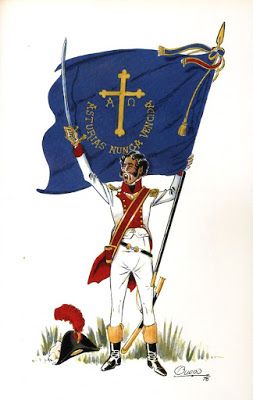 The figures are HaT Spanish Line Infantry, with the buttons on the sleeves carved off as well as those from the knee high leggings, because I wanted them to look more like the beige stockings in the images below. 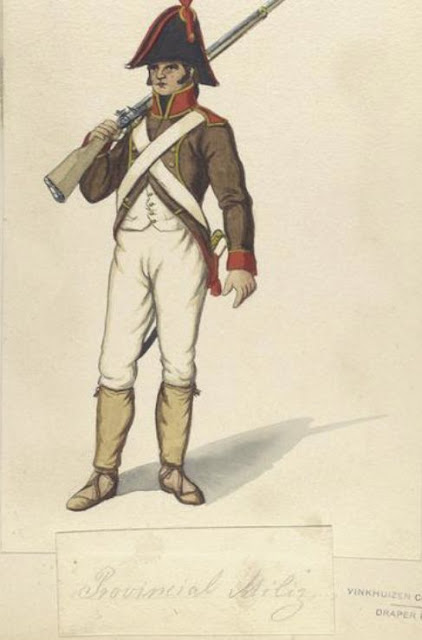 I opted to drop the piping as well, to make them look a little less polished. The flag is that of the Oviedo Provincial Militia. I photoshopped the flag from this image and have included that here if anyone cares to use it.
It was one of a few unusual Asturian flags posted at Prometheus in Aspic and I liked it as it gave some variety to the normal corona or coronela. The Oviedo militia seemed like a good choice as they were one of the pre-1808 militias. These figures will doubtfully get use both as regular line and as the post June-1808 militia in future games.