We played the Bloody Buron scenario over a couple of days as a way of ringing out the old year. I'm posting the AAR on my blog, but almost all the toys and set up were Phong's, fielding for the first time his newly minted Commonwealth battalion and support armour in his palatial basement gaming emporium.
The scenario was written by Paddy Green and Richard de Ferrars for the Battlefront WWII rule set, and is part of their excellent Blood and Honour series. I had played this scenario many years ago (AAR can be found here for comparison) and was eager to try it again. It is based on the attack by The Highland Infantry of Canada to recapture Buron, given up without a fight a month earlier after being taken by the North Novas on DDay+2. In the interim the Germans have dug deep and defended the village with extensive anti tank ditches, minefields and barbed wire.
The Highlanders will have the support of a Squadron of Shermans (Sherbrooke Fusiliers), D Troop of the 340th (SP) AT Battery and a breaching team composed of 79th Armoured's Funnies. Buron is defended by two depleted German companies as well as a support weapon company. A troop of Panzer IV's lend their support with more Panzer IV's arriving later as reinforcements.
The game was played out in 1/72nd scale figures on a 6'X8' table. 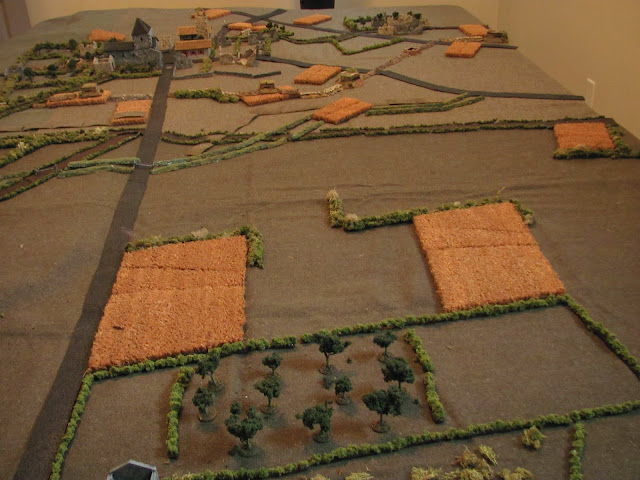 The battlefield viewed from the north. Buron occupies the high ground to the left while the smaller settlement of Guchy is to the right. An anti tank ditch spans most of the battlefield, along with known minefields backed by extensive trench works – a formidable objective to take! 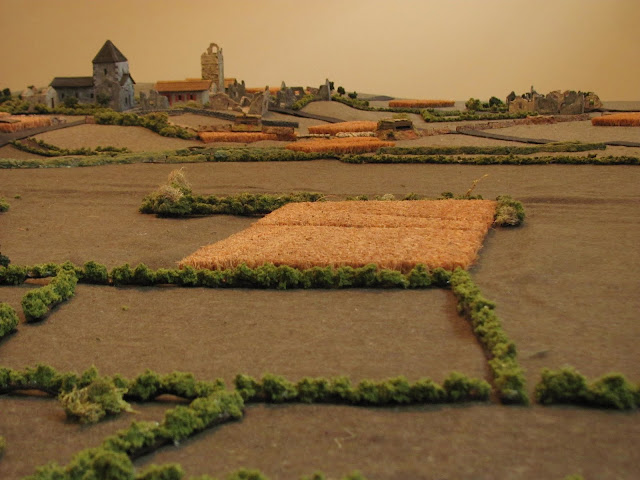 The objective viewed from the Canadian start line

A lot of ground to cover for infantry! 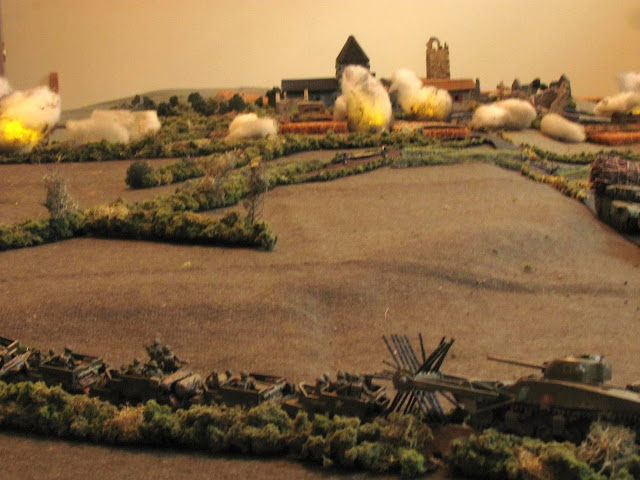 The attack opens with a rolling barrage (two regiments of 105's) that pounds the trenches in front of Guchy. On the Canadian left the carrier platoon takes the lead, roaring up the flank with the intention of testing the defences on this side and hopefully initiating a quick break through. They are supported by a Crab flail tank and followed by the Sherbrooke's Shermans, with D Company mounted, in the hopes of getting some infantry quickly up to the enemy trench lines. This proves a costly decision, as the Canadian's left flank was not yet secured by the British, and off board enemy artillery in enfilade spots the column, quickly stripping the tanks of their riders and causing heavy casualties. 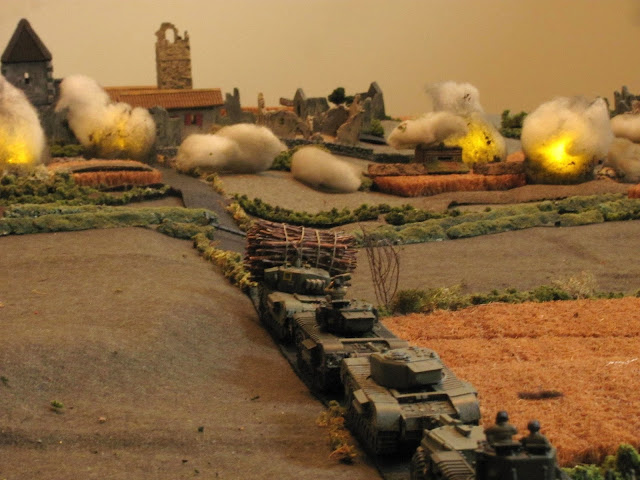 The 79th Armoured Funnies roll up the middle, lead by a fascine-carrying AVRE. The carrier platoon begins to attract some German mortar fire from Buron, but it does little to impede them. 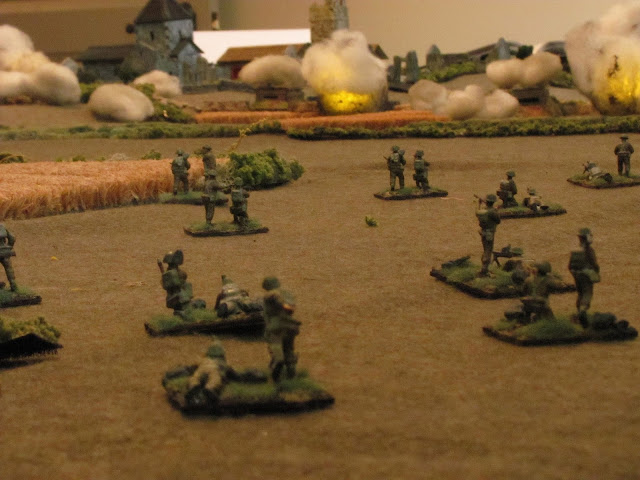 On the right flank, Highlander A and B Companies move up through the fields and open areas, covered by the barrage and not yet spotted. 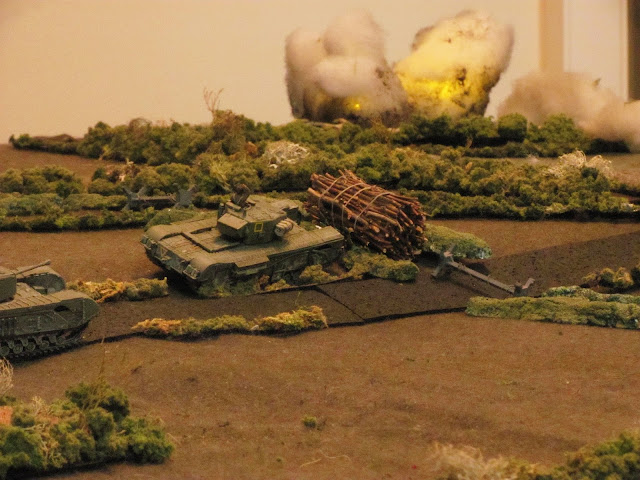 With the road blocked by obstacles, the AVRE dumps its fascine into the AT ditch, providing the first breach of that defence. 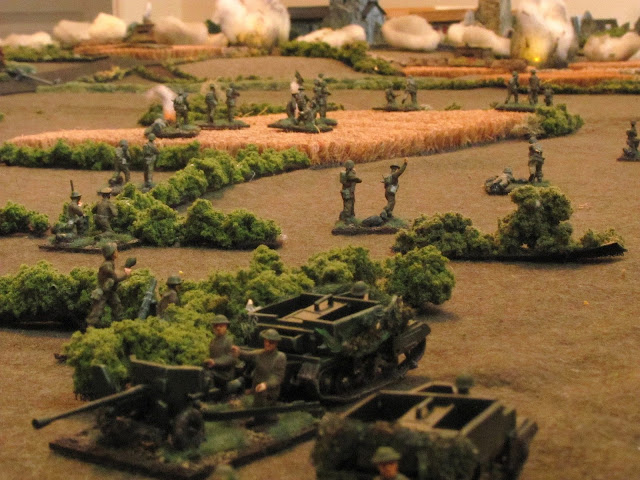 The Canadian infantry is finally spotted and the first of a series of deadly nebelwerfer attacks savages the lead company, despite them being well dispersed. The Germans have limited off board artillery and elect to use it early. In the foreground the 6 pdr. AT platoon begins a cautious approach. 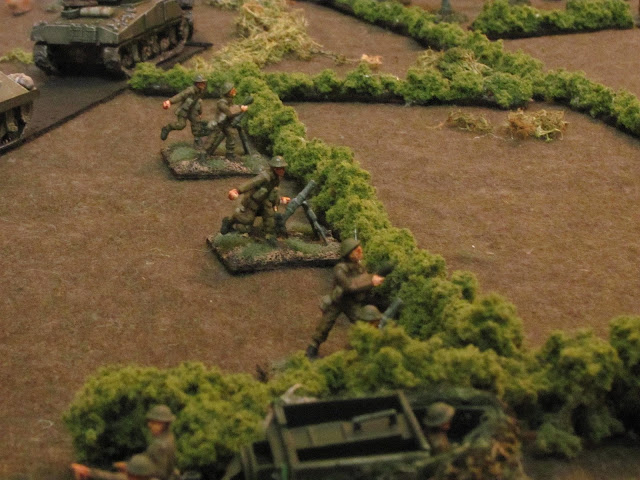 The 3” mortars zero in on the German mortars and knock out one of them. This is an early and only success, as two of the three Canadian mortars are KO'd the next round by the pesky artillery fire from the uncleared Canadian left flank. As it turns out this effectively strips the Canadians of any indirect fire support for the rest of the game, other than the rolling barrage. 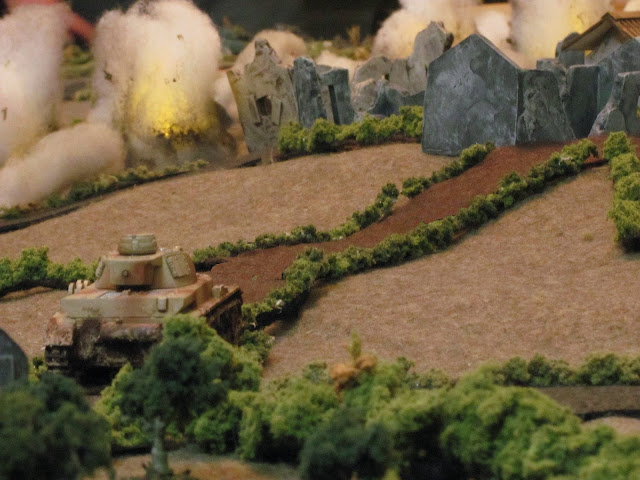 With the enemy armour clearly committed to the German's centre and right flank, the German commander moves his two Panzer IV's from covering a possible break through attempt on their left to new positions within Buron. Confident that his machine-gun positions in the trench lines along with extensive mines and barbed wire on this flank will stifle any infantry break through, the Germans also move some of their troops from Guchy to Buron to bolster the town's defence. 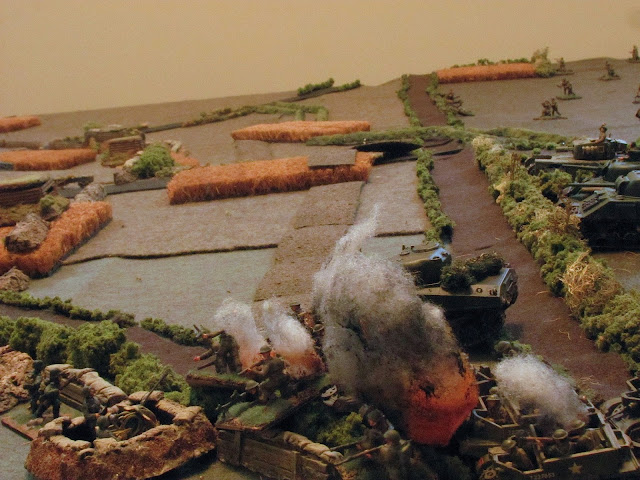 As suspected, the Canadians find that the known minefield actually extends to cover the entire German right flank. Two of four carriers are blown up and the troops bail out suppressed and disordered. A German LiG 75mm and a 20mm flak open up at close range, along with withering small arms fire, and the carrier platoon is rapidly decimated. 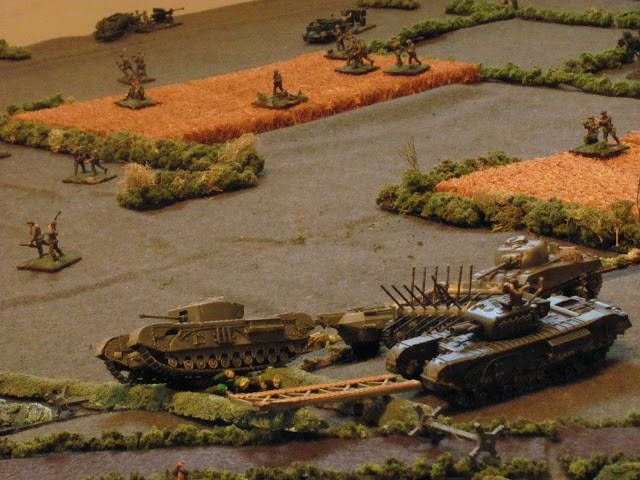 A second AVRE bridges the AT ditch, widening the access over this obstacle and making way for the Crab to clear the minefields. In the background Highlanders and the AT platoon can be seen moving forward. 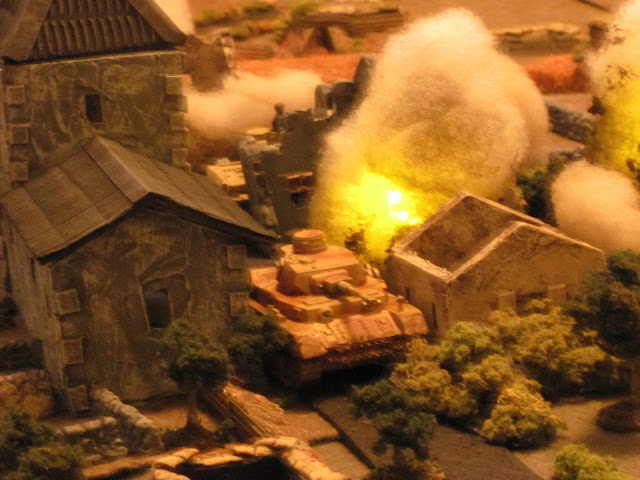 The rolling barrage sweeps through Buron, causing no casualties to the well dug in defenders but keeping the German heads down. 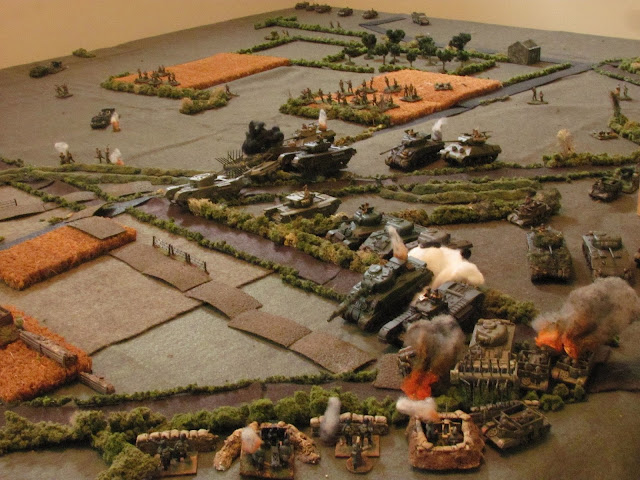 Front right the German line holds steady, wiping out most of the carrier platoon but now coming under fire from advancing enemy armour. A Crab clears a first lane through the minefield while one of the Canadian engineers clears a second beside it while obscured by burning carriers.
In the middle, reluctant to brave the minefield and hoping the Crabs and engineers might clear more lanes, the Canadian armour and British Achilles battle it out with the German PanzerIV and PaK 75mm positioned on the north side of Buron. German tank, AT and mortar fire keep the Achilles and Fireflies neutralized while the preponderance of Allied armour makes it difficult for the the Allied heavy hitters to get clear lines of sight on the enemy.
In the upper left A and B Companies continue to be savaged by German artillery and mortar fire along with the 150mm fire of the Grille guarding this flank. C Company holds back, undetected in reserve (centre top) while the remnants of D Company's clobbered tank riders continue to move up on the top right. 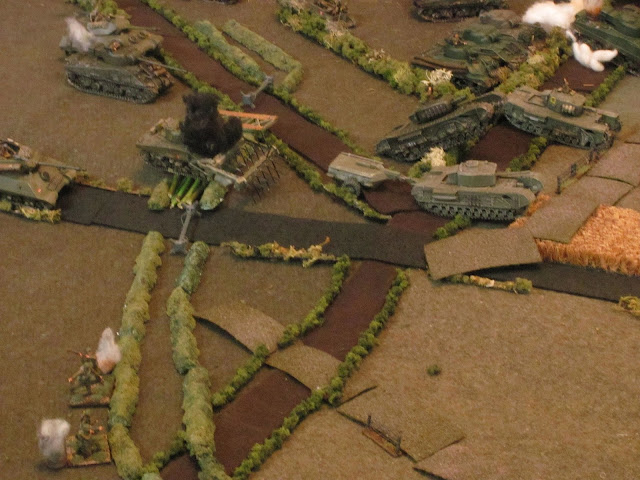 With the first Crab having secured a slim breach on the German right flank, the German tank and AT fire switches its focus to the second Crab, KOing it before it can achieve a second breach in the Canadian centre 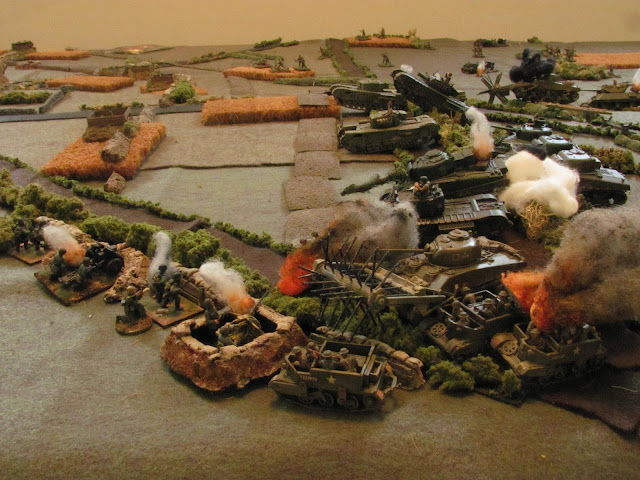 One of the surviving carriers is first through the breach, engaging the 20mm flak in close combat. It loses and is driven back, but the German line here begins to crumble. 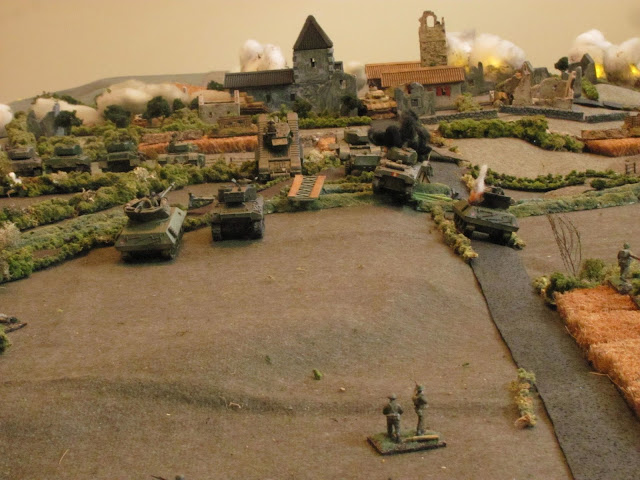 As the barrage rolls through Buron, the survivors of D Company have a lot of ground to cover as the Allied armour battles it out in front of the village. 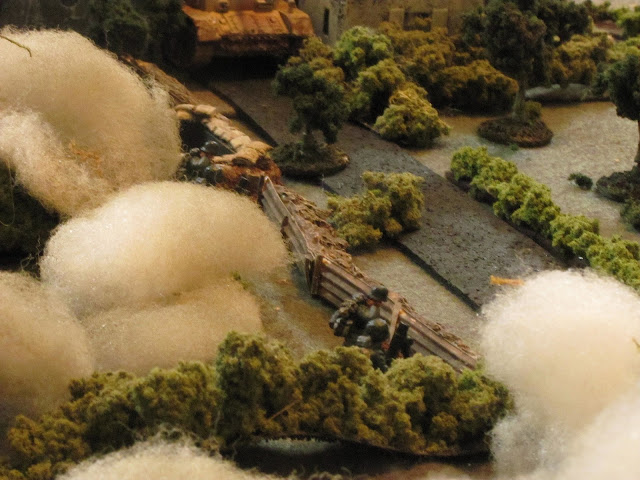 As the barrage sweeps over their entrenchment the German mortars continue to pound enemy targets. 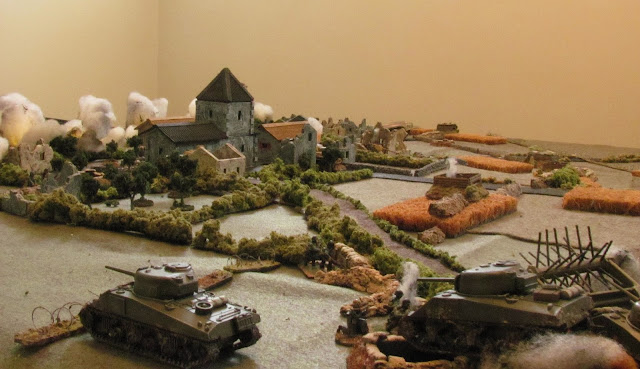 The first of the Sherbrooke tanks move through the breach, encountering barbed wire impeding their advance as they attempt to displace the Panzer IV covering Buron's east side. 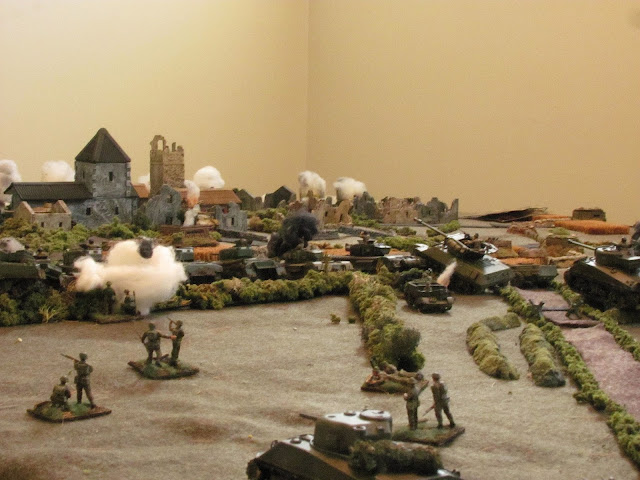 With the off board enemy guns enfilading from the east finally silenced, surviving units of D Company move up towards the line. 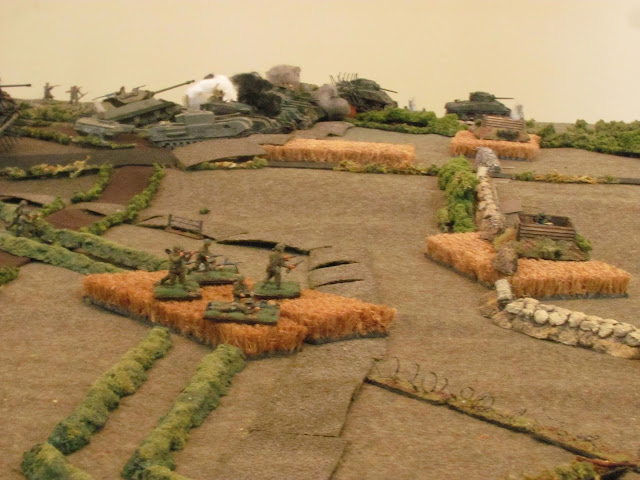 A badly diminished right flank (A and B Company casualties well beyond 50%) hunker down in the antitank ditch and the cover of tall crops, readying themselves for the final push over the minefield to engage the machine-gun bunkers that have been making life miserable. 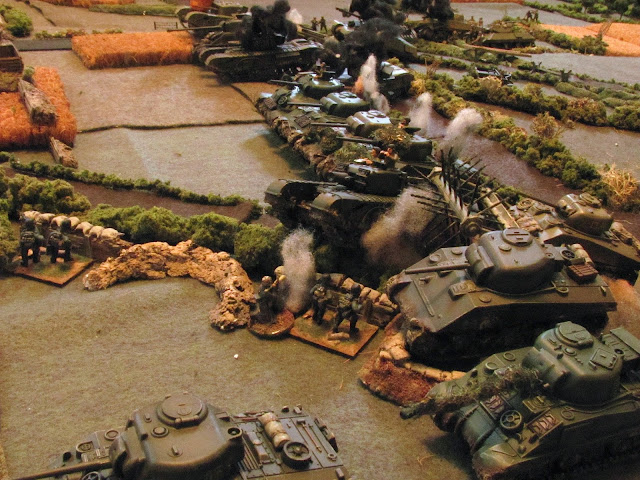 With one Crab knocked out and the second neutralized by PanzerIV fire, the Allied armour can wait no longer to push on the Buron. Although some tanks manage to negotiate the breach on the far left (foreground) the others push over the minefield. An AVRE and the Crocodile are disabled by mines (a second AVRE was KO'd earlier by Panzer IV fire), but the Shermans and one of the AVRE's manage to survive. The two German guns on this flank are destroyed and the surviving infantry driven from the trenches. 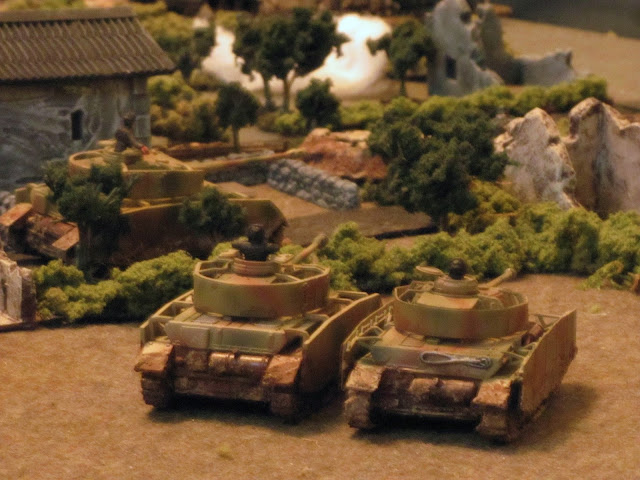 The stalled armour advance happens just as two more troops of Panzer IV's arrive from the direction of Authie. Three take up positions southeast of Buron while the fourth moves up to bolster the defences in front of the town. 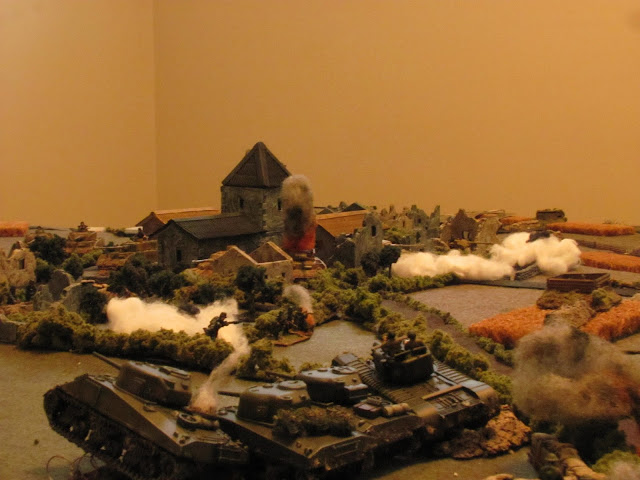 One of the reinforcing Panzer IV's (centre) is hit by Sherman fire before it can engage and is knocked out – the first and only German tank casualty of the game. 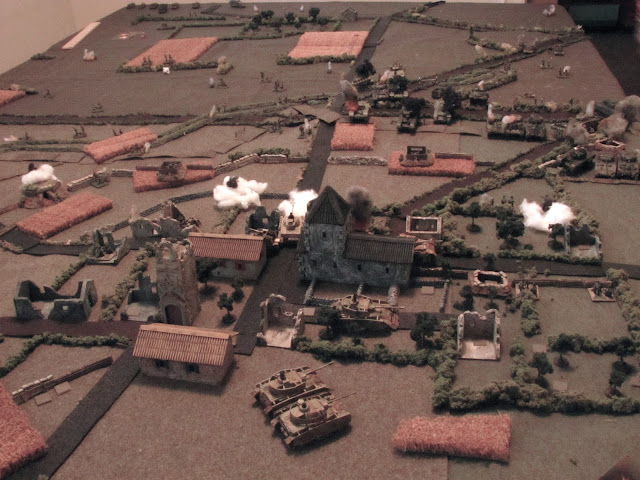 In the foreground can be seen three of the four reinforcing Panzer IV's. The fourth, knocked out, burns behind the church. From left to right the PaK40, and two original Panzers still keep the enemy armour at bay. Behind the lead left Panzer the Grille has KO'd both 6 pdrs. on the German left flank along with a number of infantry sections, while a third 6 pdr. on the right was knocked out by mortar fire. Some Allied armour has pushed through the minefield on the far right only to be brought up short by barbed wire while the others, having negotiated the minefields are still recovering from suppressions and disorders caused by the crossing (top right) and have yet to advance.
The Highlanders have finally braved the minefield crossing, C Company centre (left of the road) and A and B on the left, but now have to deal with mg fire from the pillboxes in the trench lines, none of which have yet been crossed by Canadian infantry. 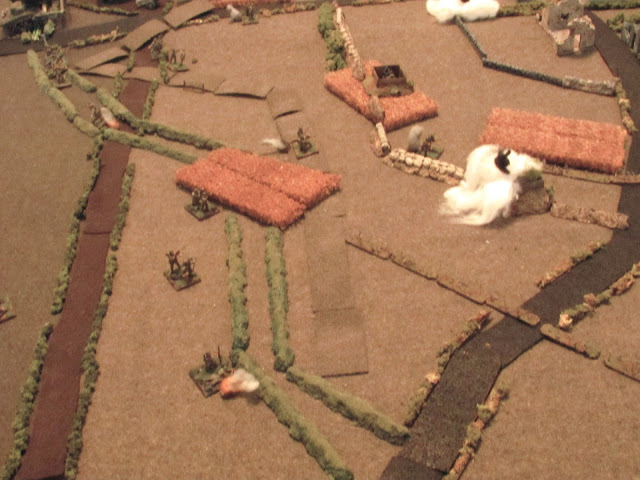 The first Canadian infantry get a foothold in the trenches, but most are cut down by mg fire from the trenches and Buron. A surviving stand clears one of the pillboxes in close combat. 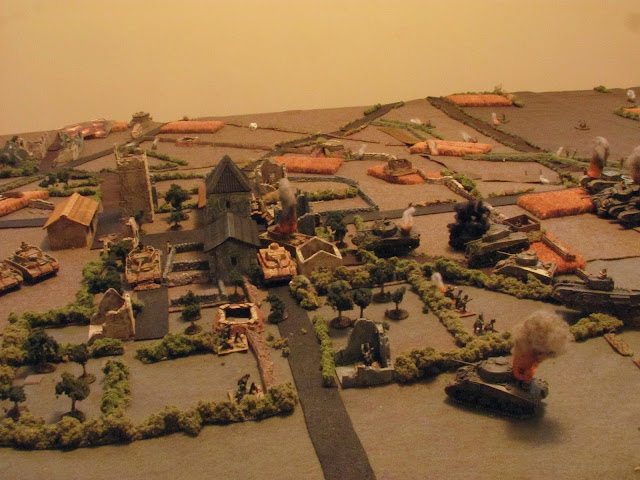 As the Shermans advance east and north of Buron, two are brewed up and a third disordered as they get into close range of the Panzer IV's and PaK40. One of the Fireflies is KO'd when it fails an initiative roll and has to recross the minefield, leaving the Allies with only two of their original four 17 pdr. armed vehicles. With Highland Infantry casualties topping 50% (only C Company still has a relatively intact company), all the 6 pdrs. and carrier platoon gone, over half the breaching team KO'd and the Sherbrooke Fusiliers at over 25% casualties, the battle is called halfway through the 9th round (technically it was a 20 round game) with the Canadian player conceding defeat and calling off the attack. The German side was still relatively intact, with the five surviving élite Panzer IV's, PaK40 and Grille likely easily to deal with any emerging armour threat and the German infantry still almost wholly intact and well dug in to Bloody Buron.