Last weekend we played through the small but exciting Action at Gorari scenario, written by Steven Lee for the Battlefront WWII rules. We played it on a 7' X 4.5' table in 20mm and it gave me a chance to field my newly painted Australian troops.

This is from Steve Lee's introduction:

“This first scenario of the Kokoda campaign simulates the first clash between the advancing Japanese forces and the Australian forces who were sent to delay them.

In response to the Japanese landing at Gona, Captain Sam Templeton, commander of 'B' Company, 39th Australian Militia Infantry, ordered 11 Platoon and native PIB (Papuan Infantry Battalion) troops to leave Kokoda and move down to Awala. He ordered 12 Platoon to move down from Kokoda to the village of Gorari, which was situated about half way between Awala and Kokoda. 10 Platoon was to remain at Kokoda and guard the airstrip. Having deployed his small force between Gona and Kokoda, Templeton left Major W.T. Watson of the Papuan Infantry Battalion in command at Awala and returned to Kokoda to meet his Commanding Officer, Lieutenant Colonel Owen, who was expected to arrive by air from Port Moresby on 24 July. On 23 July, the approach of Japanese troops unnerved a PIB patrol at Awala, and many of the native troops disappeared into the bush. As the Japanese continued to advance towards Kokoda, 11 Platoon fell back to the southern bank of the Kumusi River at Wairope (pidgin English for the wire-rope cables of the narrow foot bridge), and it was joined by Major Watson with his officers, NCOs and a handful of Papuan Infantry Battalion (PIB) troops. The wire bridge across the river was then cut, but the Japanese engineers soon erected a crossing of their own.

Having been informed that between 1,500 and 2,000 Japanese troops had landed at Gona, Templeton ordered 11 Platoon to fall back to Gorari if contact was made with Japanese troops. On the afternoon of 24 July, Japanese troops appeared on the Gona side of the Kumusi River and fire was exchanged across the river. 11 Platoon and Major Watson's PIB troops then withdrew and joined 12 Platoon at Gorari. A sharp skirmish developed over the Oivi creek.” 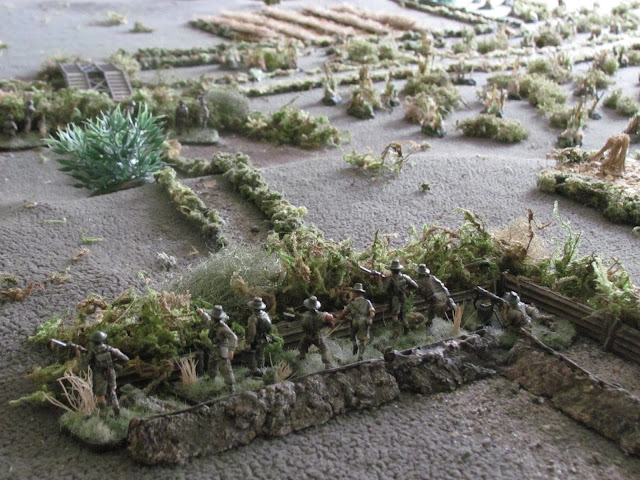 1. No. 12 Platoon takes up positions in the trenches south of the creek
With news that the vanguard of the Japanese force is approaching Gorari, No. 12 Platoon of B Co, 39th Australian Infantry Battalion, along with Capt. Sam Templeton and an attached Vickers moves into prepared trenches fronted by an abatis. The trenches guard the intersection of two trails and are on the high ground above the creek. Behind them in the jungle No. 10 Platoon is just arriving at the ford, while the supporting 3” mortar moves up to the jungle's edge to emplace. 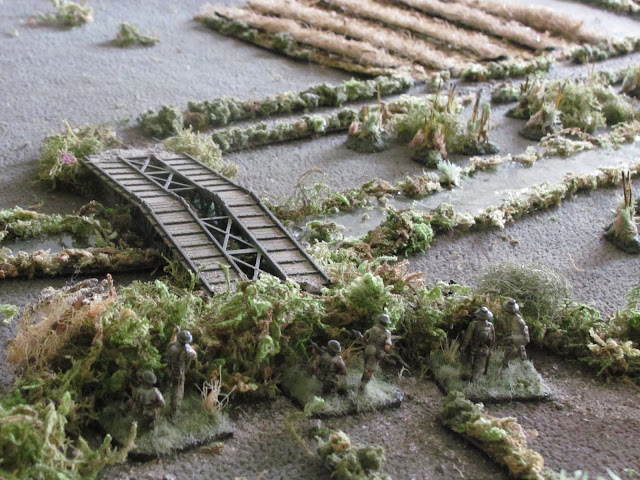 2. No. 11 Platoon at the crossing
Meanwhile, No. 11 Platoon has fallen back across Oivi creek to an aboveground position fronted by a barricade and abatis which guards the bridge. A third defensive position straddles the eastern trail but with the native infantry “gone to bush” the Australians lack the manpower to defend it. 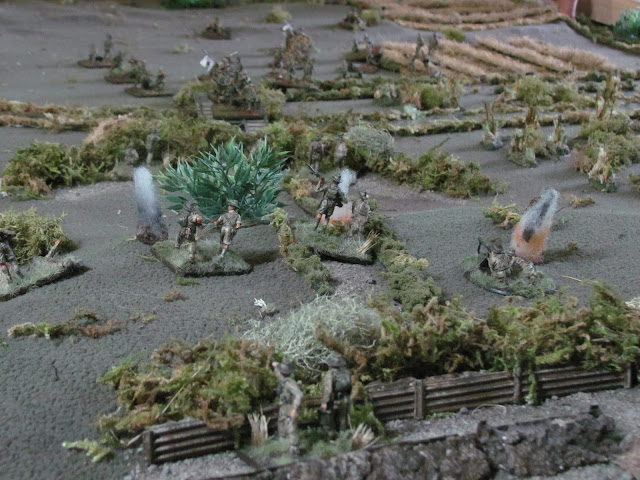 3. No. 12 Platoon pinned as it moves to reinforce the bridge
As two companies of Japanese emerge from the jungle on the north side of the creek, the Australian commander sends No. 12 Platoon and the Vickers down to reinforce the creek-side defences as No. 10 Platoon moves up to take their places in the trenches. His assumption is that the bottleneck caused by the bridge (the only way across the swollen Oive creek) would be the best place to stage a defence. But Japanese mg fire pins three out of the four sections, delaying their arrival. 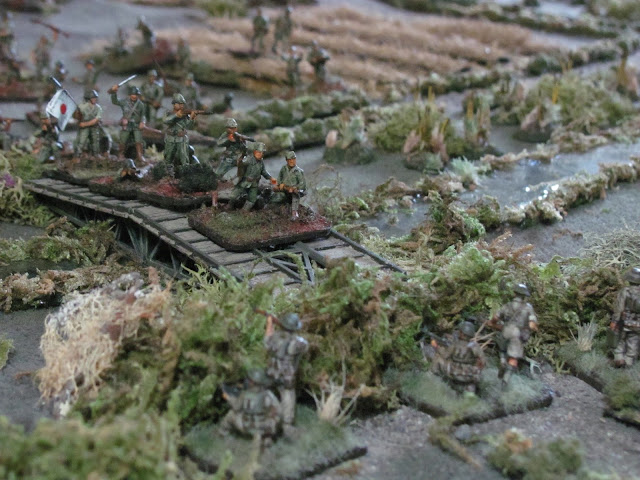 4. Japanese storm the bridge
As the lead Japanese storm across the bridge initial Australian fire is wild and erratic, doing little to stem the tide. Two platoons of a third Japanese company emerge from the jungle and join the attack. 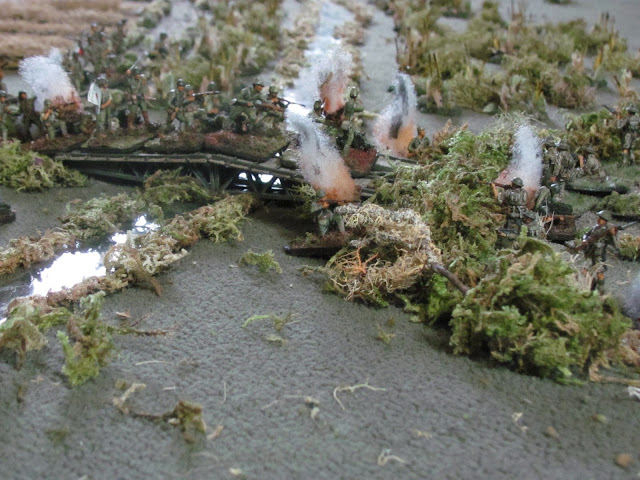 5. Defensive position by bridge under attack
But the defence is soon stiffened by the arrival of No. 12 Platoon and the Vickers. Both sides take fire as the Japanese attempt to breach the barricade but only one Japanese unit is successful in crossing the barricade and he is quickly eliminated. 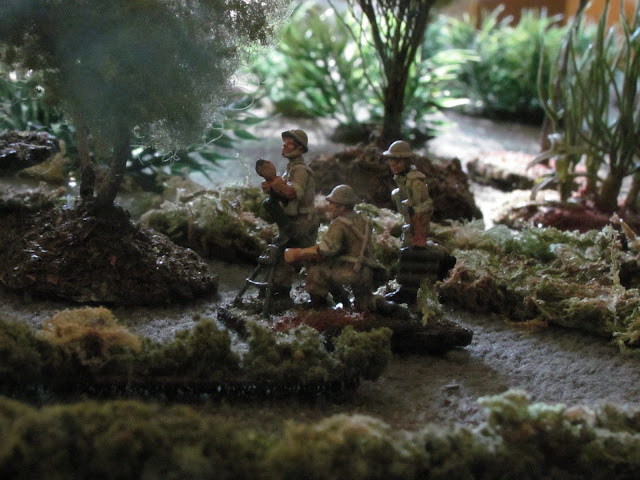 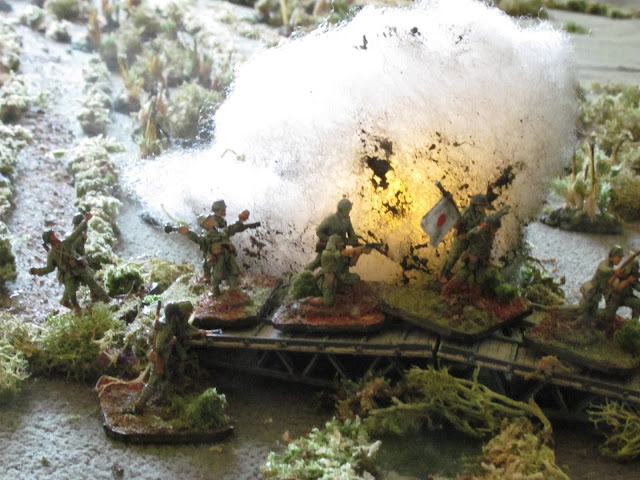 7. Mortar strikes
The mortar and small arms fire begins to take their toll on the attackers as casualties mount. 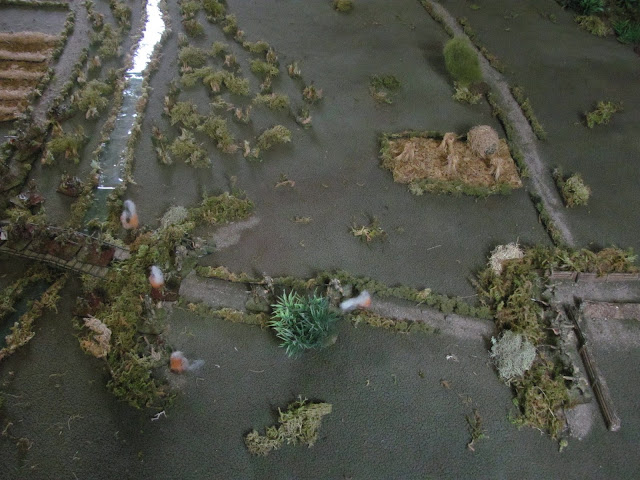 8. Overview
Nos. 11 and 12 Platoons battle it out with the Japanese at the bridge (left) while No. 10 Platoon and the Australian commander wait in the entrenchments (right). So far the Australian lines hold with the Japanese having lost a company's worth of infantry versus one section of Aussie infnatry, but the Japanese have now got their medium mg's in place and are bringing deadly suppressing fire down on the enemy. Off picture to the right is the 3” mortar. 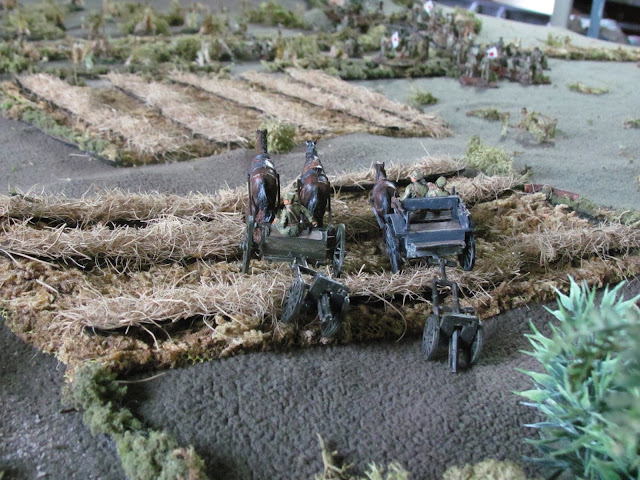 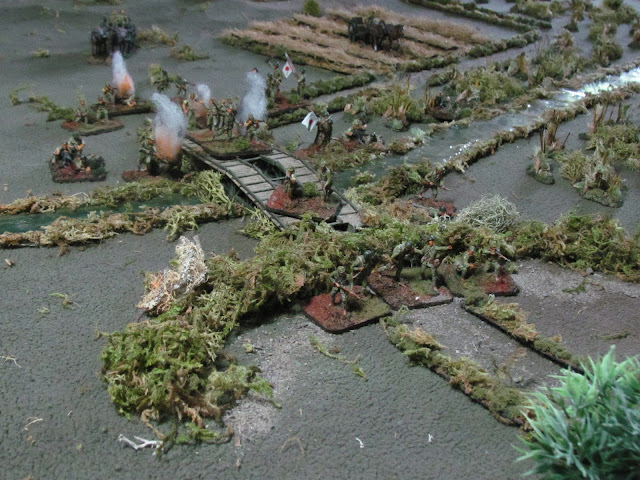 10. First Australian position overrun
The trained Australian troops are no match for the veteran Japanese campaigners, and suddenly the lead position collapses. Survivors of the two defending platoons flee back towards the entrenchments but most are cut down before they can join No. 10 Platoon. 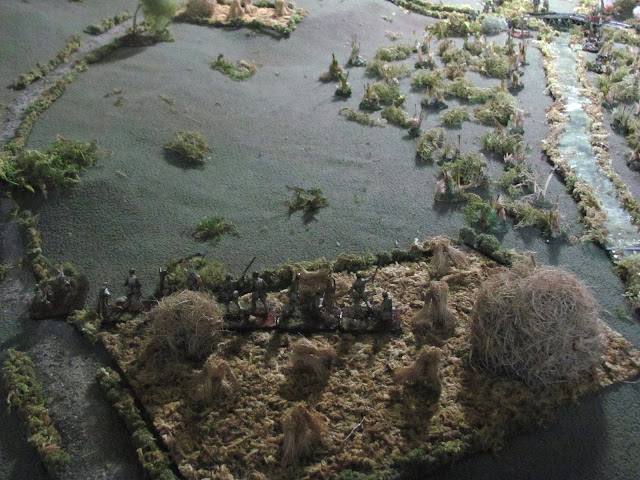 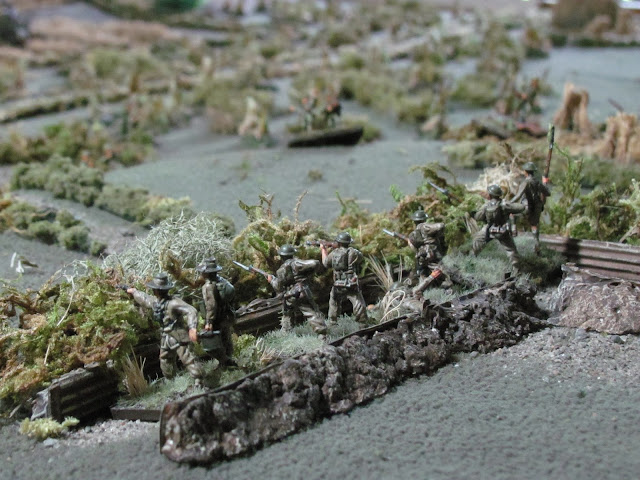 12. No. 10 Platoon prepares to meet the attack
Capt. Templeton rallies his remaining troops, hunkered down in the entrenchments waiting the Japanese attack and holding their fire until the enemy closes. But with units closing in now both from the north and east, it doesn't look good. 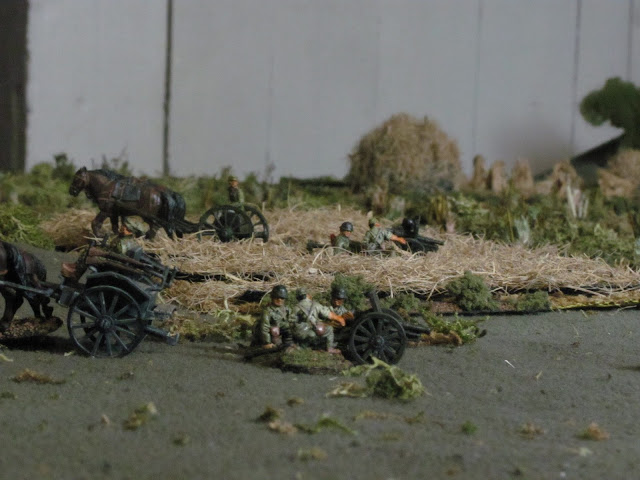 13. Japanese infantry guns go into action
The 70mm guns zero in on the Australian mortar's position and in two rounds of fire manage to knock it out. 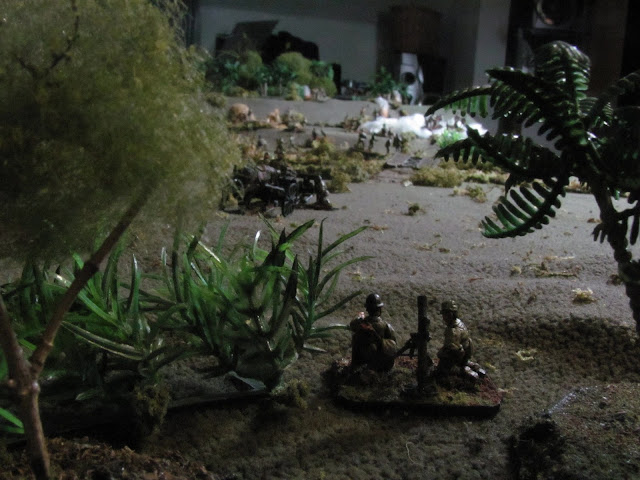 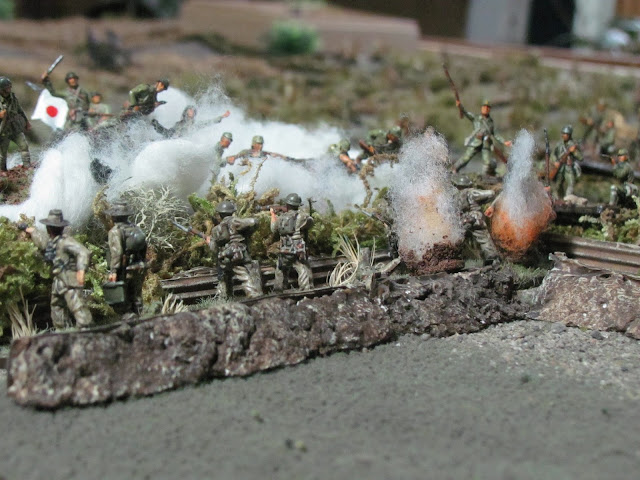 15. Trenches come under assault
The smoke successfully masks the Japanese advance, allowing them to storm the Australian trenches without casualties. 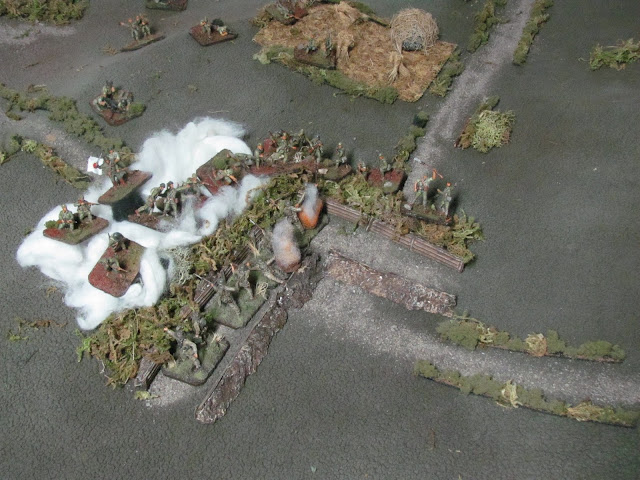 16. Overview
Although some straggling units still approach, the Japanese manage to throw overwhelming odds into the attack from both the north and east, with the defenders lacking the manpower to effectively hold the trench line. 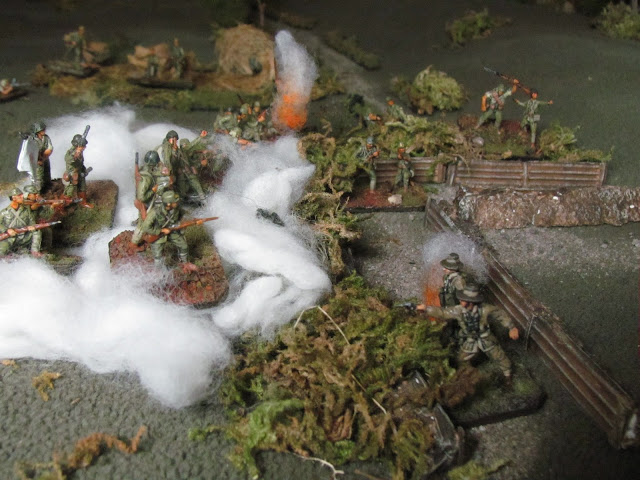 17. Last man standing
On the final game turn a disordered Capt. Sam Templeton is the last defender left in the trench system as the Japanese spill over the barricade. 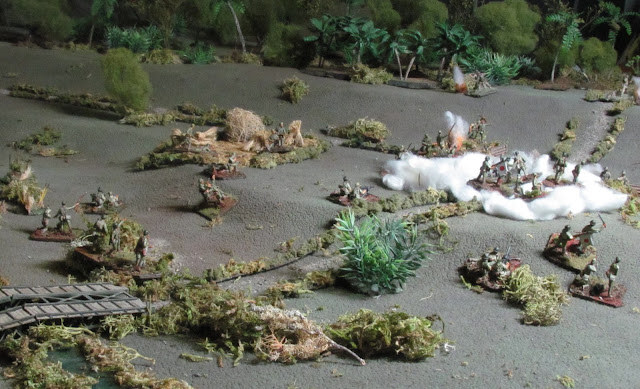 18. Game end
This shot shows the final round of play, with numerous Japanese forces still advancing up the slope from the creek as the trenches fall to assault. Although technically the Australians still hold the trench at the end of game, victory points give the Japanese an overwhelming victory by a factor of 4 to 1. This is my second play through of the scenario playing the Australian side, and both were a lot of fun but ended similarly.