We finally had an opportunity to complete our Somewhere in Normandy scenario begun about a month ago (see above post). December proved to be a busy month! This small non-historical scenario is played in 20mm using Battlefront WWII rules. 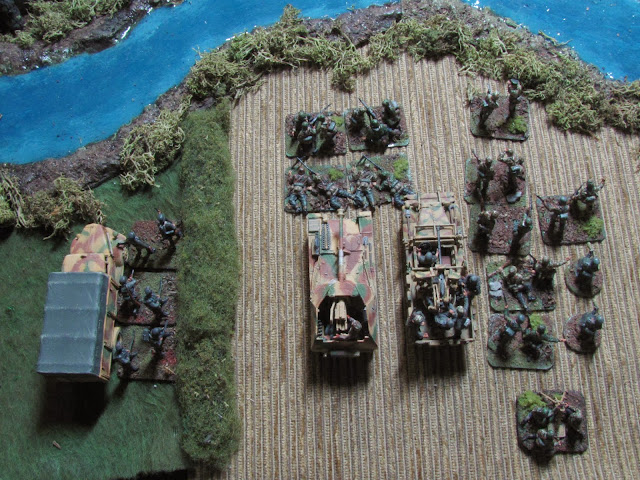 German Forces
One of my readers suggested that it was helpful to see the Canadian forces involved, and that I should do the same with the Germans. I had wanted to keep the exact composition of the German forces a secret from the attacker, but here is what the Canadians were up against.

The bridge's rearguard was composed of a reduced veteran panzergrenadier company, reinforced by an SdKfz. 10 AA halftrack and a Marder III, all dug in or in fortified positions in the village and manor. In addition a platoon of German engineers (non-combatant) arrived in their transport to wire the bridge for demolition. 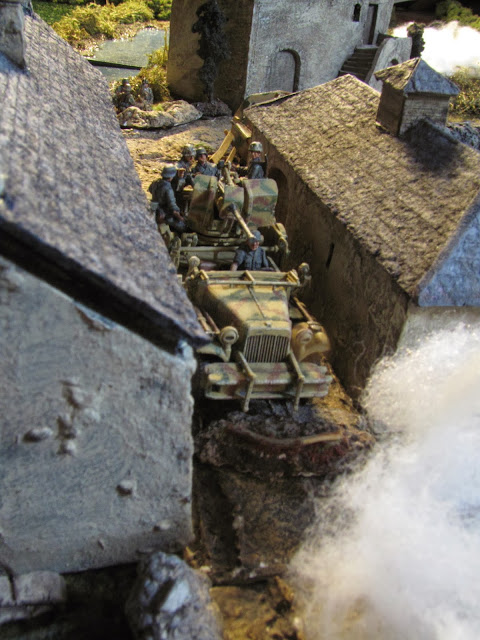 16. SdKfz. 10 positioned at edge of village
A heavy machinegun in the adjacent building and a German 20 mm halftrack hold up the Canadian attack at the east end of the village. 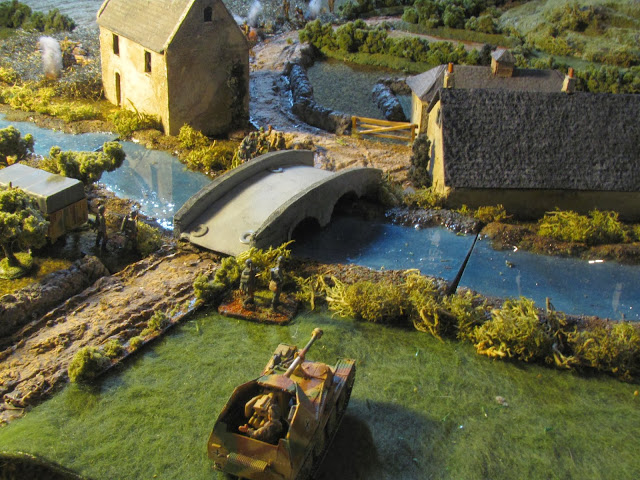 17. Marder III withdraws
The German engineers quickly wire the two of the three remaining demolitions needed to blow the bridge. The Marder withdraws from the north of the river to cover the German rearguard's retreat. 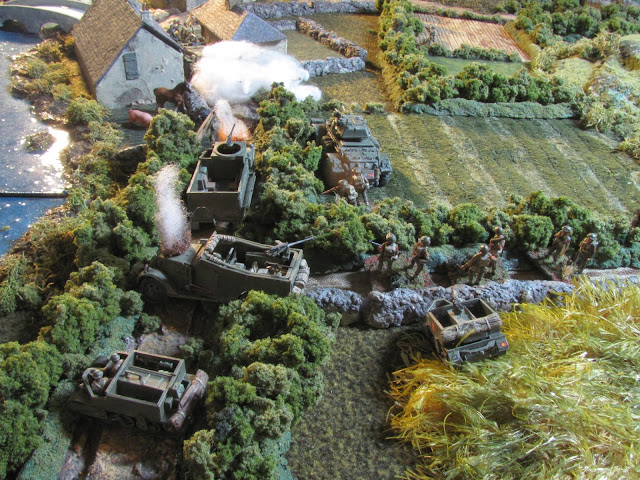 18. Staghound and armoured halftrack engage east end of village
After the initial burst of fire that tore up the Canadian infantry at the east end of the village (Part 1), the Staghound and an armoured halftrack now lead the attack. German mortar fire knocks out the dismounted Vickers section. A Bren carrier and the Canadian commander's White scout car press up to the river to engage the German engineers at the bridge with machinegun fire, hoping to stop them from laying the final charge. 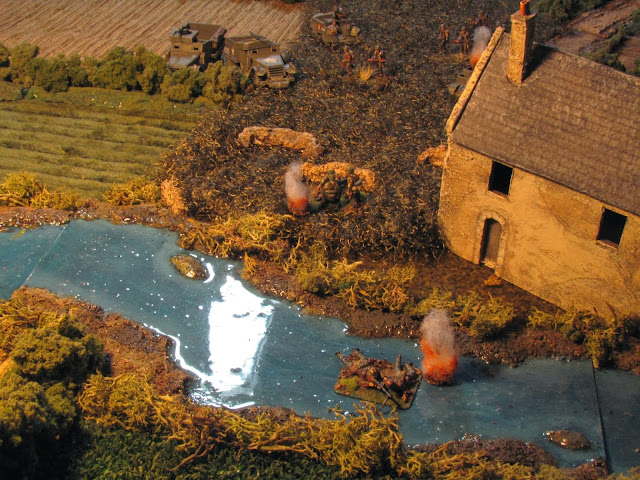 19. German left flank begins to break
On the German left flank Canadian mortar fire and supporting fire from the M10's soften up the defence. Morale breaks and a light machinegun section panics and retreats to the river, shot up before it could gain the far bank. A second German section is KO'd by the M10's 50 cals. and the heavy machinegun is knocked out by infantry close assault. 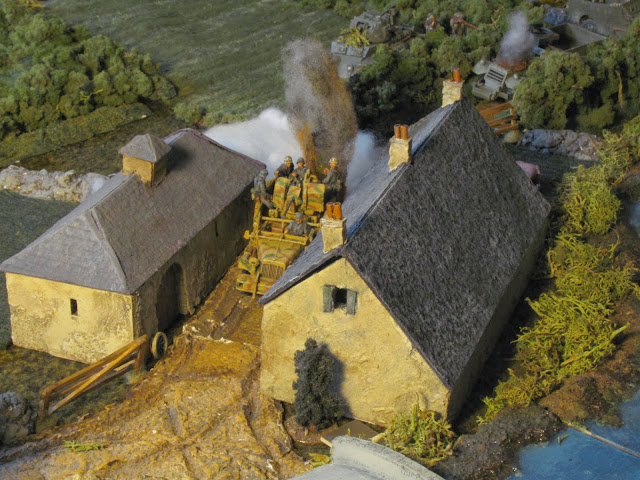 20. SdKfz. 10 knocked out
The same bad morale roll causes the SdKfz. 10 to panic on the German right flank, and it is promptly knocked out in enfilade as it turns to retreat. 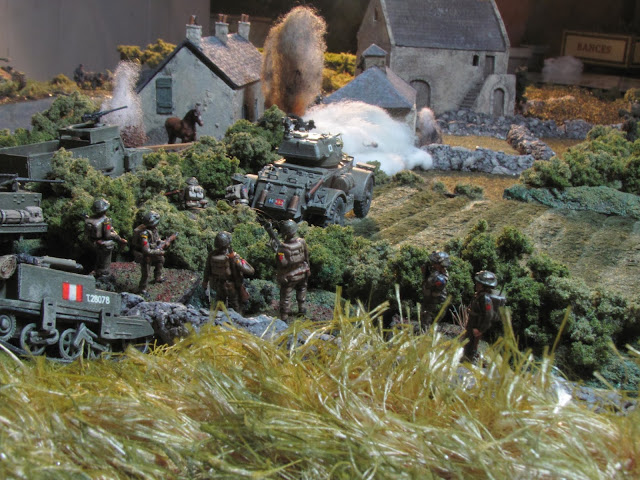 21. View from the lane east of the village
The Canadian infantry hold back while their light armour attempts to winkle out the defending heavy machinegun nest. 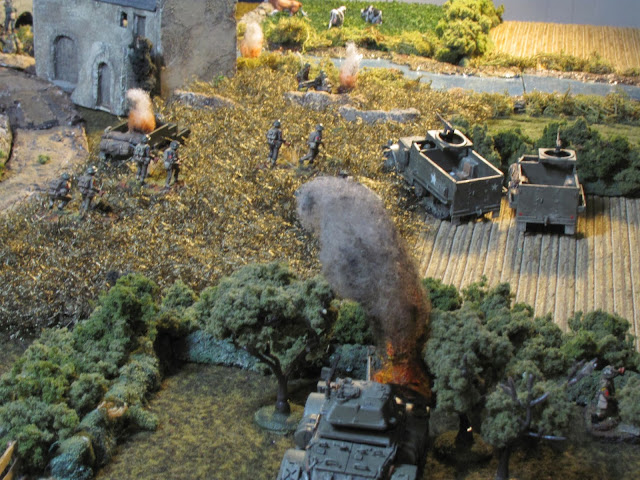 22. Canadian right flank pushes forward
With the back broken in the German defence on this flank, the Canadian infantry push forward through the cover of the tall crops to assault the manor house. 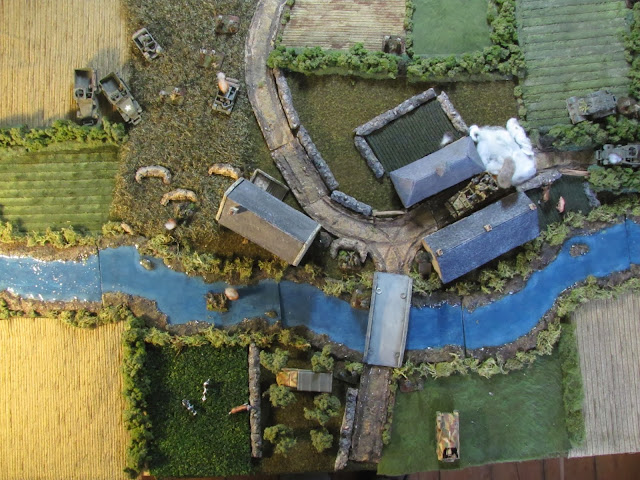 23. Overview
In this overview you can see the two flanks of the Canadian attack pushing forward. The Marder, withdrawn to the far side of the river, holds an excellent position to stop any encroachment on the bridge while the German engineers have successfully placed their fourth and final demolition charge on the bridge. 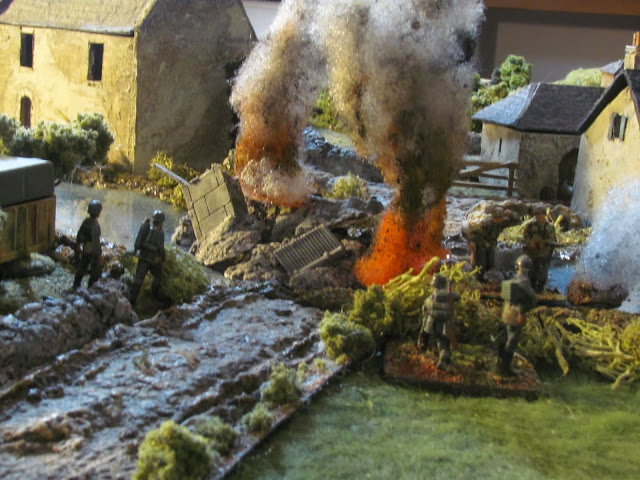 24. Bridge blown!
As the Canadians close in the bridge is blown. A German section, dug in next to the bridge, made a last moment attempt to sprint across to the south side of the river but were suppressed by enemy small arms fire before they could reach the far side. A successful bail out roll allowed them to leap into the river as the bridge went up in smoke and flames.
Although the blowing of the bridge assures the Germans of a minor victory the scenario plays out for two more turns which will determine if the Germans can achieve a major victory. This will de a factor of victory points achieved through enemy casualties and successful German withdrawal (voluntary) to the south side of the river, with the defenders needing to achieve a 2 to1 ratio in their favour. 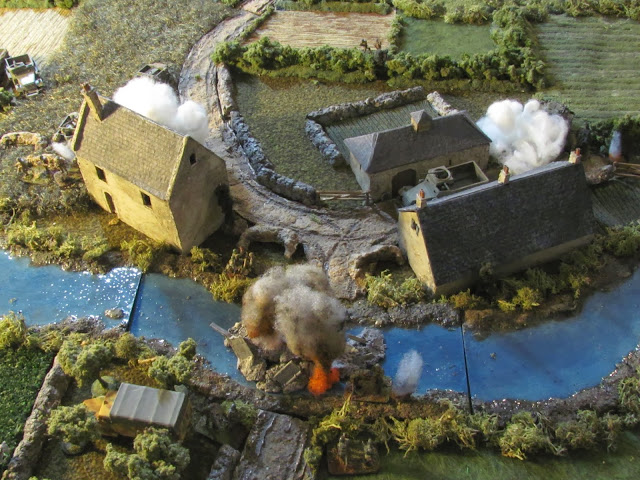 25. Germans attempt to pull back
With the bridge blown, the German units north of the river attempt to pull back. A Canadian M10 ventures into the village where it is unsuccessfully close assaulted by the German infantry while a second German machinegiun opens up from the east end of the village, pinning the Canadian troops trying to work their way into the houses.
On the west flank, Canadian troops close assault the manor, knocking out the German command post and engaging a panzerfaust armed infantry section that had been lying in ambush there, guarding against any armoured encroachment down the road. Meanwhile the German mortar, lacking targets, retreats to the river bank in order to withdraw. 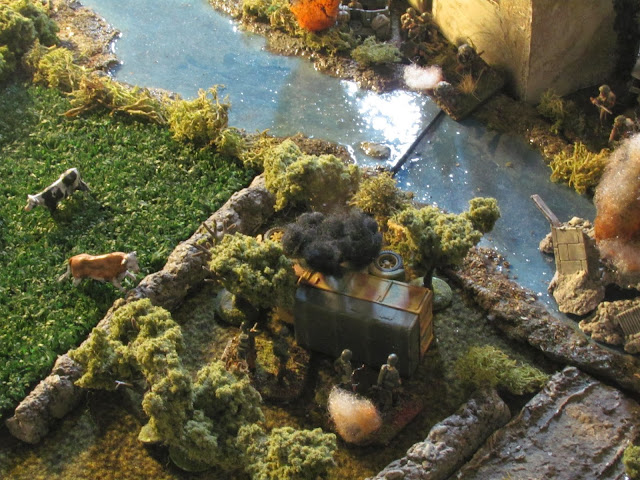 26. Engineers' transport knocked out
The remaining engineers scramble for their truck to bug out but the truck is knocked out by a Vickers team, which had bailed out from their carrier on the previous turn after it had been KO'd by the Marder. 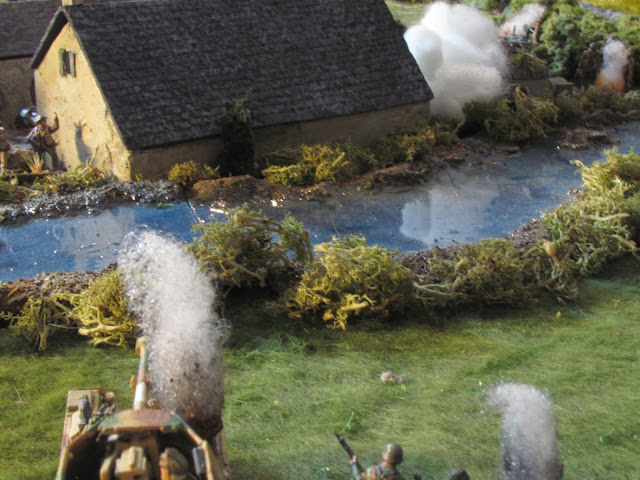 27. Marder engaged by Staghound
Under cover of smoke the Staghound moves to the river bank, engaging the Marder on the far side of the river. Meanwhile the Canadian infantry, with little to shoot at, try their hand at making shadow puppets on a farmhouse wall. 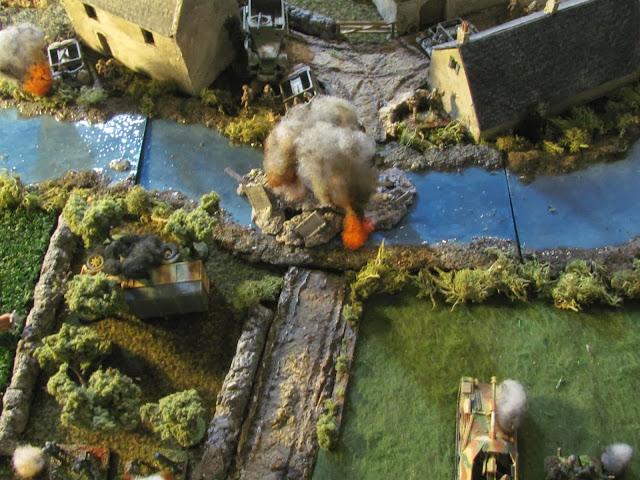 28. Canadians seize north bank
The last of the German defenders are cleared from the north bank as Canadian troops spill out and around the now cleared manor, knocking out the German mortar before it could retreat, as well as an engineer section on the north side of the river. The remaining German engineers panic and flee while one surviving German infantry section rallies by the Marder. 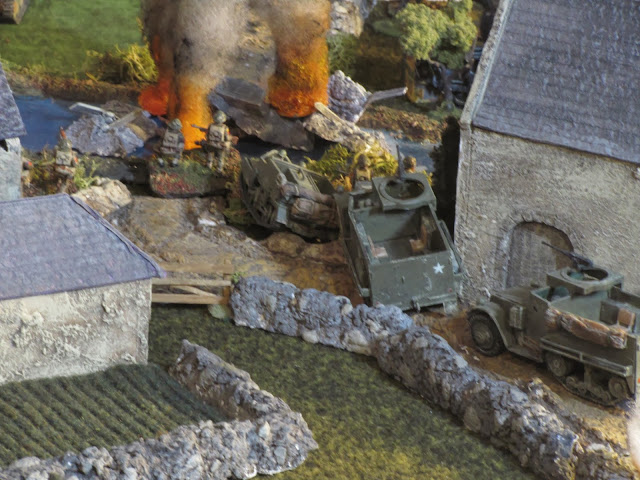 29. From the north side of the river
Carriers and M10's, obscured by the smoke of the burning bridge, move forward to help clear out the last of the Germans north of the river. 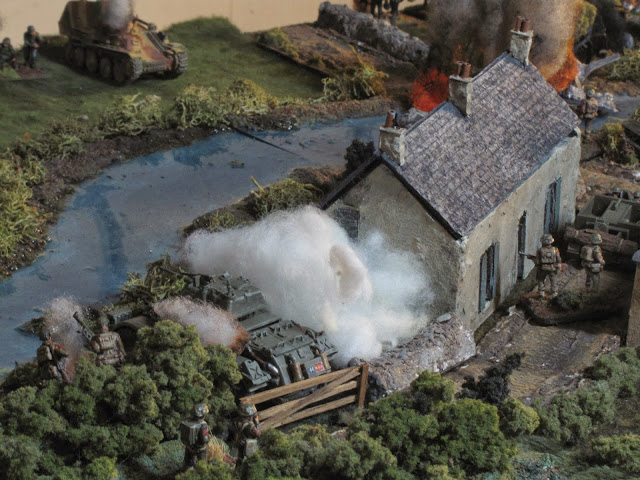 30. Game over
As the Marder and Staghound trade some parting shots the Canadians move in to secure the village. With the bridge blown the German player achieves a minor victory but the Canadians' agressive pursuit of the rear guard (whose moral had broken, sending them into full retreat) combined with the defenders withdrawing only two units successfully south of the river, meant that the Germans were unable to achieve the 2 to 1 Victory Point ratio necessary to claim a major victory.